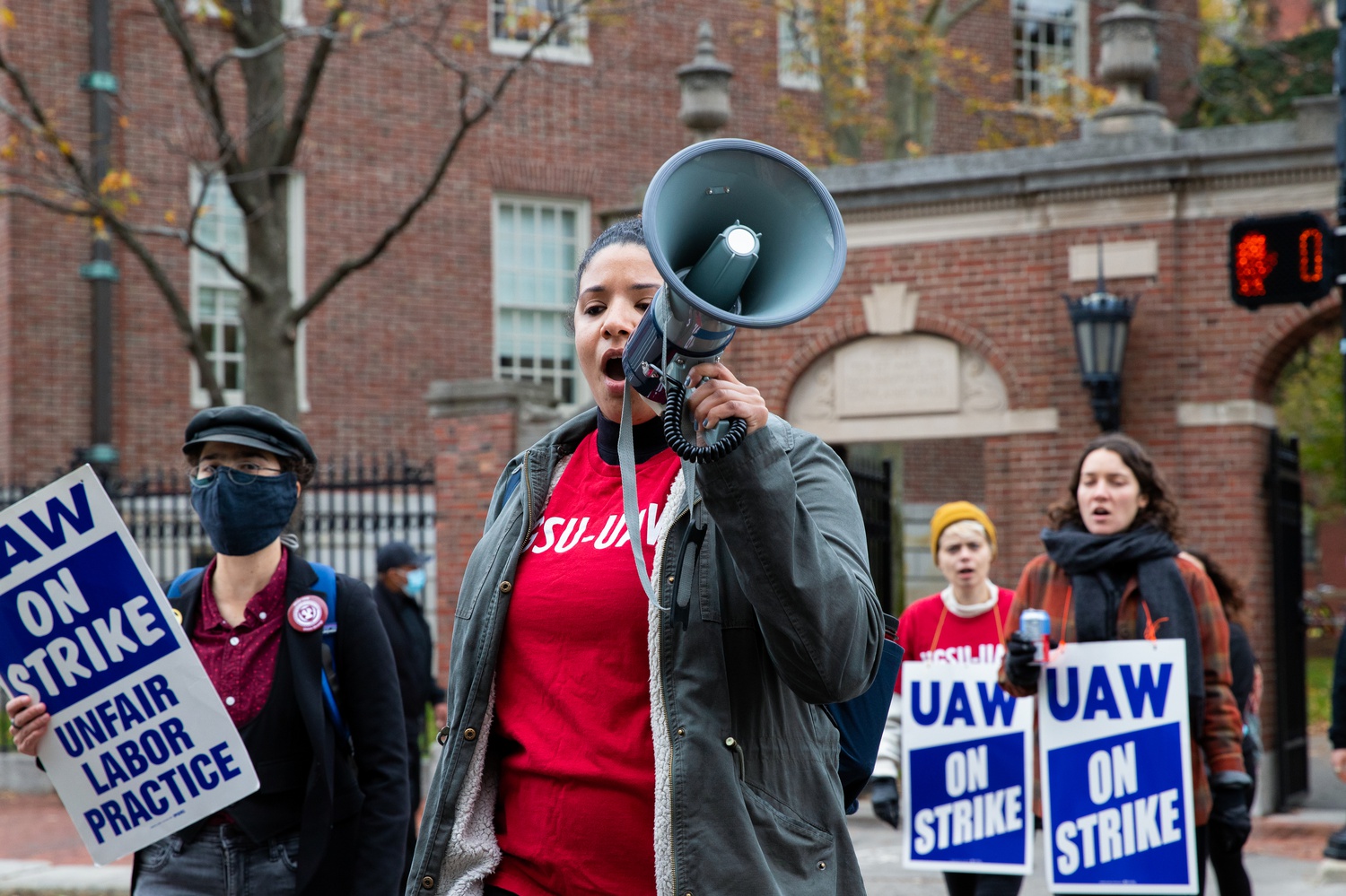 Just 10 days after its last strike, Harvard’s graduate student union announced a new strike deadline Monday — if the University does not address its “unfair labor practices” and offer an “acceptable deal” by Nov. 16, student workers will go on a “strike of undetermined length.”

Harvard Graduate Students Union-United Automobile Workers will hold a special membership meeting next Monday as a final opportunity to avert picketing beginning the following day, according to an email to members. If the strike begins, the union will hold similar meetings every three days where members can motion to put the continuation of the strike to a 24-hour membership-wide vote. The strike would continue until the union votes to end it.

The union and Harvard have not met for a formal bargaining session since Oct. 27, the first day of the previous strike. The union continues to call for higher compensation, new procedures to handle discrimination and harassment complaints, and union security.

HGSU-UAW President Brandon J. Mancilla said Monday he thinks progress in bargaining has slowed because the University does not want to engage with the latter two demands.

The union wants an agency shop, which would require all student workers represented in the bargaining unit to contribute to union activities or a student worker health fund. It is also requesting that Title IX hearing and appellate panels be composed of a majority of third-party individuals. In its latest package of proposals released Oct. 26, the University remains opposed to both provisions.

“Those are the two major issues still that we’re very far apart on,” Mancilla said. “Any discussion of compensation or the other articles in the contract that have not been settled yet are really being held up because of that — because the University does not want to engage with those proposals.”

Harvard spokesperson Jason A. Newton wrote in an emailed statement Monday that the two parties have continued informal discussions since the conclusion of the previous strike.

“The two parties have met since HGSU-UAW’s three-day strike ended on Oct. 29, in off-the-record conversations, concerning issues on which the two sides have not yet reached an agreement,” Newton wrote. “The University remains committed to reaching an agreement with HGSU-UAW.”

An unfair labor practice is an official complaint to the National Labor Relations Board, which triggers an investigatory process.

Newton added that Harvard is “unaware” of any actions that would warrant filing an unfair labor practice.

“The University is unaware of any illegal action taken by any member of the University administration or HUPD during the three-day strike that ended on Oct. 29, nor has HGSU-UAW provided, to date, any specific details regarding such allegations,” he wrote.

According to HGSU-UAW Sergeant-at-Arms Maya I. Anjur-Dietrich, the union plans to file the new unfair labor practice charges with the NLRB later this week and is currently finalizing details.

In announcing the strike deadline Monday, the union said Harvard must address the unfair labor practice charges and provide “a significantly-improved counter proposal” by Nov. 16 to avert another strike.

If the University offers the union a contract before the strike deadline that addresses some, but not all HGSU-UAW’s demands, Mancilla said the bargaining committee would put the agreement to a membership-wide vote asking student workers if the new offer is good enough to call off the strike.

If bargaining comes down to the wire and the University returns such an offer on Nov. 15, the union will hold a membership-wide vote on it starting at 6 p.m. The strike would still officially begin at midnight, but union leadership would advise members to refrain from withholding labor for 24 hours until the vote’s conclusion at 6 p.m. the next day, according to the announcement.

Based on those results, members would either strike on Nov. 17 or return to work.