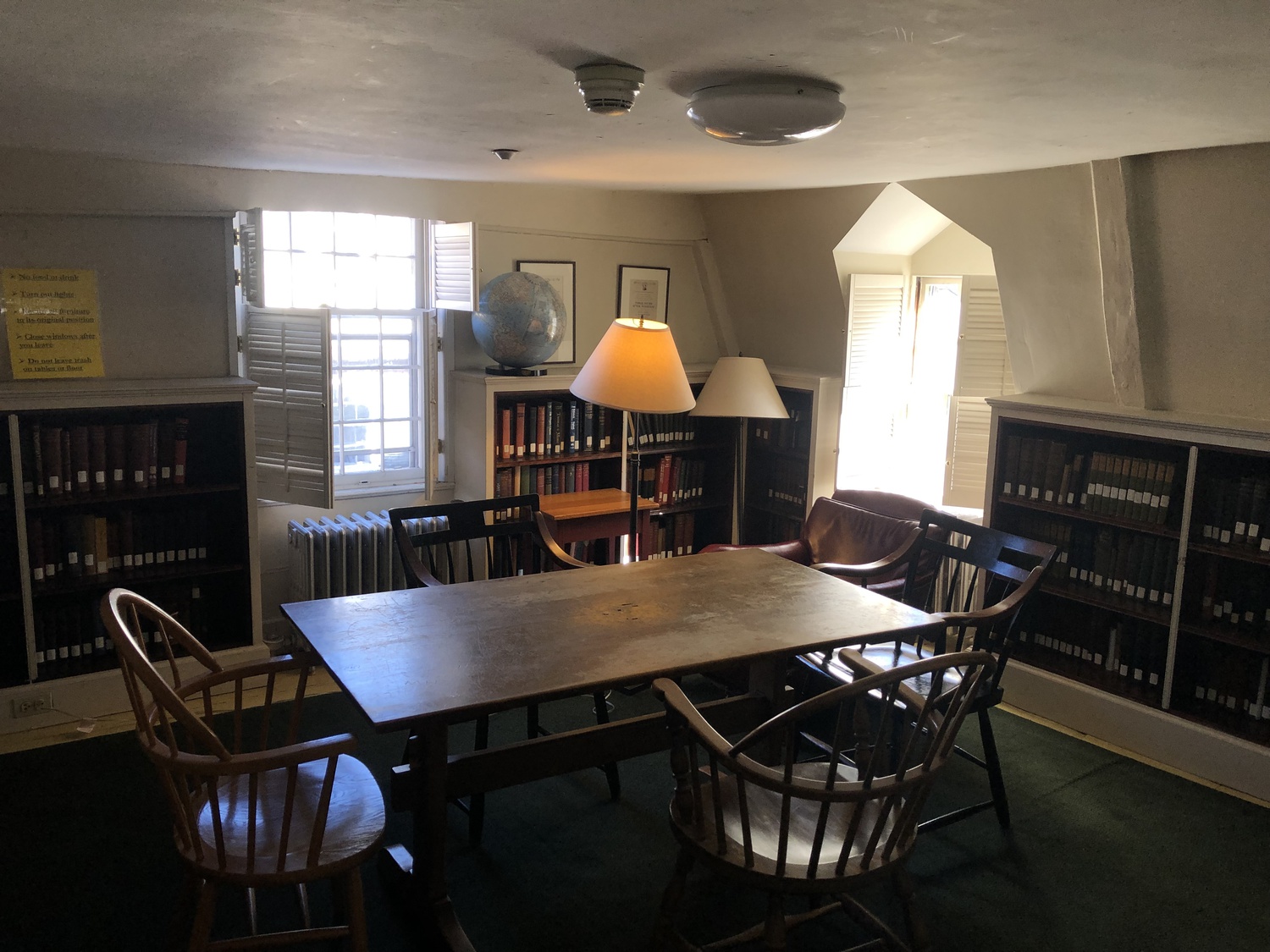 The Haunting of Hicks House: One Night in Harvard’s Spookiest Library

In the years since its construction of Hicks House, located in Kirkland’s C-Entryway, lore has floated around Harvard’s campus of the ghosts living there. In an attempt to see them for myself, I decided to spend a night in the Hicks House Attic, now used as the Kirkland House library.
By Sarah W. Faber

“We don’t just run from scary things. We run to them as well.” - Jeannie Banks Thomas, American folklorist

John Hicks built Hicks House in 1762 on land that his great grandfather, Zechariah Hicks, had purchased in 1652. But in 1928, Harvard physically moved Hicks House to its location in Kirkland’s C-Entryway to make room for the Indoor Athletic Center, known now as the Malkin Athletic Center, or the MAC. In the years since its construction, lore has floated around Harvard’s campus of the ghosts living in Hicks. In an attempt to see them for myself, I decided to spend a night in the Hicks House Attic, now used as the Kirkland House library.

The following is based on actual events. Not even the names, locations, or events have been changed.

11:46 pm
It’s cold up here. The room is imposingly undecorated, save a few framed frayed documents on the wall that are either facsimiles or super old — a portrait of John Stuart Mill, a charter from 1648, and artifacts of the like. There’s a globe on one of the shelves where Russia is labeled as the Soviet Union.

I can hear voices from the other room in the attic. A girl’s and a guy’s. Am I being heteronormative, or is someone getting their butter churned? Their tea steeped? Their breeches breached? According to the carvings on the wooden table on which I write this currently, “JTS ’07 FUCKED JYL ’07 HERE ’04” and someone “WAS BLOWN HERE 5/8/82” and someone “FORNICATED WITH THE LIBRARIAN (right here) SHE GIVES GREAT HEAD” and “CHRIS LIKES MEN.”

12:23 am
I’m not sure what to do if I have to pee. I don’t know where the bathrooms are in Hicks, and I’m sure as hell not going to adventure alone to find them at midnight. I’ve resolved to suffer until morning.

I’m tucking myself in now, to the red leather armchair up here outfitted with the pillow from my bed and the Target throw blanket my roommates and sit on while we watch The Bachelor. I brushed my teeth before I left my room — don’t worry. I feel eerie, I’d say, because of the mustiness of this room, but I’m not explicitly scared. The ghost of John Hicks — which I do believe in — probably isn’t here.

Under the framework of the Duwamish people of British Columbia and Washington state, the Hicks family ghosts would haunt the MAC rather than Hicks House, since spirits are tied to land rather than infrastructure. Coll Thrush writes: “The idea that particular locations have both identity and agency is central to Indigenous epistemologies of place, in which sites not only have meaning but volition, acting upon the lives of human (and other) peoples.” So, I should be safe.

If they do haunt the MAC, then I would venture there’s just less lore about it because: A, it’s newer; B, it closes its doors and the possibility of supernatural experience at 10 p.m.; and C, there’s some inherent spookiness in stories about an 18th-century library that stories about a 20th-century gym could not claim. Or perhaps the Hicks family ghosts do reside in Kirkland. Maybe as colonial entities their tie is not to the land because the land is not actually theirs, and so they moved with the physical building into Kirkland in 1928. I tuck myself in a little more.

While I do stand by my fan theory that the Hicks ghosts live in the MAC, I think there are other ghosts in Hicks House. There’s one that I’m developing a friendship with. It’s a pretty surface-level-September-in-Annenberg kind of friendship, but to be fair, across spiritual planes, it’s a pretty long-distance. Here’s what happened:

On the last full moon, my Folk and Myth class, FM133: “Supernatural Storytelling: Ghost-lore, Occult Legends, and the Politics of the Paranormal,” took a field trip to Hicks to experience its hauntedness for ourselves. We were split up among the house’s nine rooms. In room three, my partners Laiba, Grace and I turned out all the lights, shut the windows, and gathered around an electric candle I had brought in — legend/Tibetan Buddhism has it that on the full moon, karma is multiplied by 100. Do something good, you get 100x good karma. Do something bad… best of luck to ya.

We started by telling each other ghost stories, and noticed the pattern of the candle’s flicker on the ceiling. So, we decided to ever-so-gently utilize the movement of the light to talk to whatever was in the room with us.

“Okay,” Laiba started. “If the light on the ceiling moves back and forth, that means yes. If it moves in circles, that means no. Is there someone in the room with us now?” The light immediately and decisively moved back and forth. Through our yes/no questions we learned about our new friend: No, he was not older than us. Yes, he was a soldier. Yes, there are other ghosts around campus. No, he does not get along with them. No, he is not buried around here. No, he is not confined to this house. Yes, our incessant questions were annoying him. We took the hint and said good night.

One could certainly chock this up to a coincidence. But I don’t think coincidence is enough. And I’m not alone in this. Take this example from Azande philosophy, from E. E. Evans-Pritchard: A granary collapses on top of the people sitting under it. The Azande would chock it up to mangu, a word most closely translated as “witchcraft”.

The collapse itself is not witchcraft. Every Zande knows that the termites eat at the wood until it is no longer stable, and that granary collapse is common. They know, too, why people were sitting under the granary — it was probably hot out, and the shade provided by the granary would be a welcome relief. But why would it collapse at the particular moment that those particular people were sitting under it? Here, I’d probably chock it up to coincidence. But coincidence is a tautological answer for why these events coincided in time and space. And coincidence is not a very satisfying answer for the way the flicker of the electric candle constructed for us a cohesive narrative of the life of our soldier ghost friend.

2:04 am
Fuck this. If I were a ghost, I would not inhabit Hicks. It sucks. I guess the cold wouldn’t bother me if I were a ghost, since I don’t think I’d feel physical sensation without having a physical entity connected to my spirit, but it’s still creepy up here on this cold and rainy night. I can hear the rain pouring down as a steady stream, but it’s coming from my left, while the window is on my right. It’s definitely raining outside — I checked my little weather app — so I’m not sure why it feels like the rain sound is coming from inside the house. Whether I’m psyching myself into hearing things or not, the whoosh of the downpour is not helping my bladder.

6:47 am
I’m up. Despite how freezing I was last night and still am, I’m covered in sweat. Like, disgustingly so — there’s two sizable pit stains on either side of my sweatshirt. I’m packing up my things and getting out of here. My unmade twin-XL has never been so enticing.

8:14pm
Six of my friends are over to watch the Bachelorette. For movie-theater ambiance, the lights in the room are all off, save one string of fairy lights lining the fireplace and one lamp set to dim. I notice a cup on the mantle of the fireplace with a solid one sip of rosé in it, and ponder aloud:

“Why is there a cup with, like, one sip in it?” My friends did not know, as they do not live in the room, and would have no reason to have an advanced knowledge of its collected wine debris.

One friend jokes, “I figured it was just something you left for the ghosts.” We chuckle. Haha. Classic, silly Sarah and her silly belief in ghosts.

AND THEN. IMMEDIATELY AFTER THIS IS SAID. AT THE MENTION OF “GHOST”: The lamp flared to its brightest setting for about two seconds, then flashed back to its dim state.

“WHAT THE FUUUUUCK!” I say through a gasp. “DID YOU GUYS SEE THAT? IT’S NEVER DONE THAT BEFORE.” It really hadn’t!

They had seen it too. It was epic. And, I’m flattered that my little dorm room is more habitable to ghosts than even the great Hicks House. Soldier ghost friend, if you’re reading this, there’s a cup of Trader Joe’s boxed wine with your name on it in C-11 forevermore.

— Magazine writer Sarah W. Faber can be reached at sarah.faber@thecrimson.com.