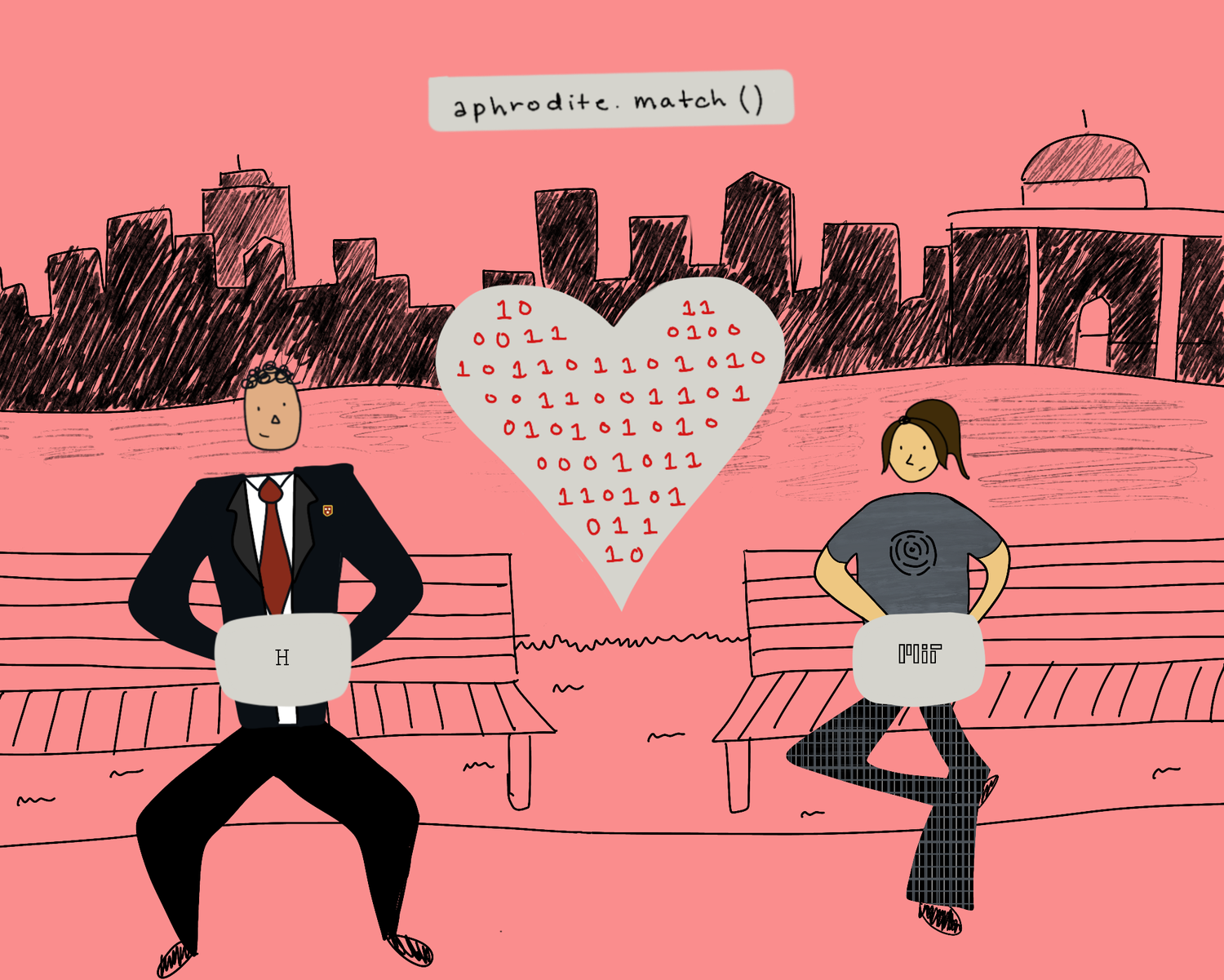 Can an algorithm designed by college students help you find the one?
By Tess C. Kelley

It almost feels like a conversation with a friend.

I stare at my screen as I fill out the Aphrodite Project’s questionnaire, detailing my beliefs and long-term goals to a computer. The Project, which recently expanded to pair up students at Harvard and MIT for Valentine’s Day, promises to find me my “ideal” match.

Co-founder Aiden Low, a senior at The National University of Singapore, cites many sources of inspiration for the Project, including the Stanford Marriage Pact, a survey which claims to use an algorithm to suggest stable marriage pairings. The Aphrodite Project was also a response to complaints that Low observed at his own school and heard from his friends: that students often struggled to date because of their busy schedules and the difficulties of meeting compatible people. “Why not try and create something that could create more meaningful opportunities for love and acceptance?” Low asks.

Low also recalls a specific conversation he had with another student, a transgender woman. Listening to her struggles dating in the “more conservative” environment of Singapore motivated him to focus on inclusivity. To that end, the Project provides a range of gender and sexuality options for participants.

The first iteration of the Aphrodite Project began at The National University of Singapore in 2019. When he went on an exchange to Canada, Low brought the Project with him. Low and his team later expanded the Project to other schools in Singapore, Canada, and Hong Kong, before eventually making their way to Cambridge.

“Really the algorithm benefits from having as many people signing up for the Project as possible,” Oh explains. “The broader the pool, the better the matches.”

“PS: You’re now past the halfway mark — hang tight!” the website tells me. The depth of the Project begins to dawn on me.

The extensive survey includes more than 70 questions, ranging from the participant’s desire to own a pet to their religious beliefs to their thoughts on drug use. The spectrum of questions is intended to improve the quality of matches.

“The Aphrodite Project is very intentional compared to some of the other matching platforms, particularly because of the psychology research that goes into the questionnaire,” Chew says. Vivian Lai, the team member in charge of brainstorming questions and another leader of the Harvard/MIT matching, has contributed to psychology research at several other universities.

Despite the care and attention put into the questions, some students worry they can be invasive or triggering. “There was one question, and it was like, ‘I would not want to date any applicants of a certain race,’ which kind of rubbed me the wrong way,” says Ian M. Espy ’23. Similarly, Ellen S. Hwang ’24 remembers a question asking about childhood or teenage trauma, which she worried could be too intrusive.

While the Project’s members stress inclusion, the questionnaire allows users looking for a romantic match to list their “dealbreakers,” which can include certain religions, ethnicities, or gender identities. The Aphrodite Project explains in a statement that, since everyone only gets one match, this feature is designed to make matches successful for both parties. “We do not wish for anyone to feel the pain of outright rejection due to any aspect of their own identity,” the statement reads.

However, this decision could contribute to the stereotyping and systemic exclusion often present in the dating scene. Data from other dating apps have demonstrated that certain demographics consistently get fewer matches.

After collecting participants’ responses, the Aphrodite Project utilizes a “Nobel Prize-winning algorithm” to help participants find their perfect match: the Gale-Shapley algorithm. Created by two economists, it is designed so that once everyone is matched, there are no two people who would rather be with each other than with their current matches.

According to Harvard economics professor Dr. Scott D. Kominers ’09, the Gale-Shapley algorithm is “great” for a one-time matchmaking service like the Aphrodite Project. However, he warns there is room for error in how the Project ranks each participant’s prospective matches. “The algorithm requires the assumption that agents have strict preferences over prospective partners,” he says. This assumption means that the Aphrodite Project must use participants’ responses about their own lives and carefully extrapolate to help rank participants’ possible matches.

“Now’s your chance: write a short personal message to your match!” Part of me feels like I’m writing to a close friend, while another part reminds me that this person is currently a stranger.

For me, taking the questionnaire was essential to understanding the Project. But most participants have done it for other reasons. “I was like, ‘I have nothing to lose. I’m just going to do it,’” says Hwang, describing her decision to take part in the Aphrodite Project. 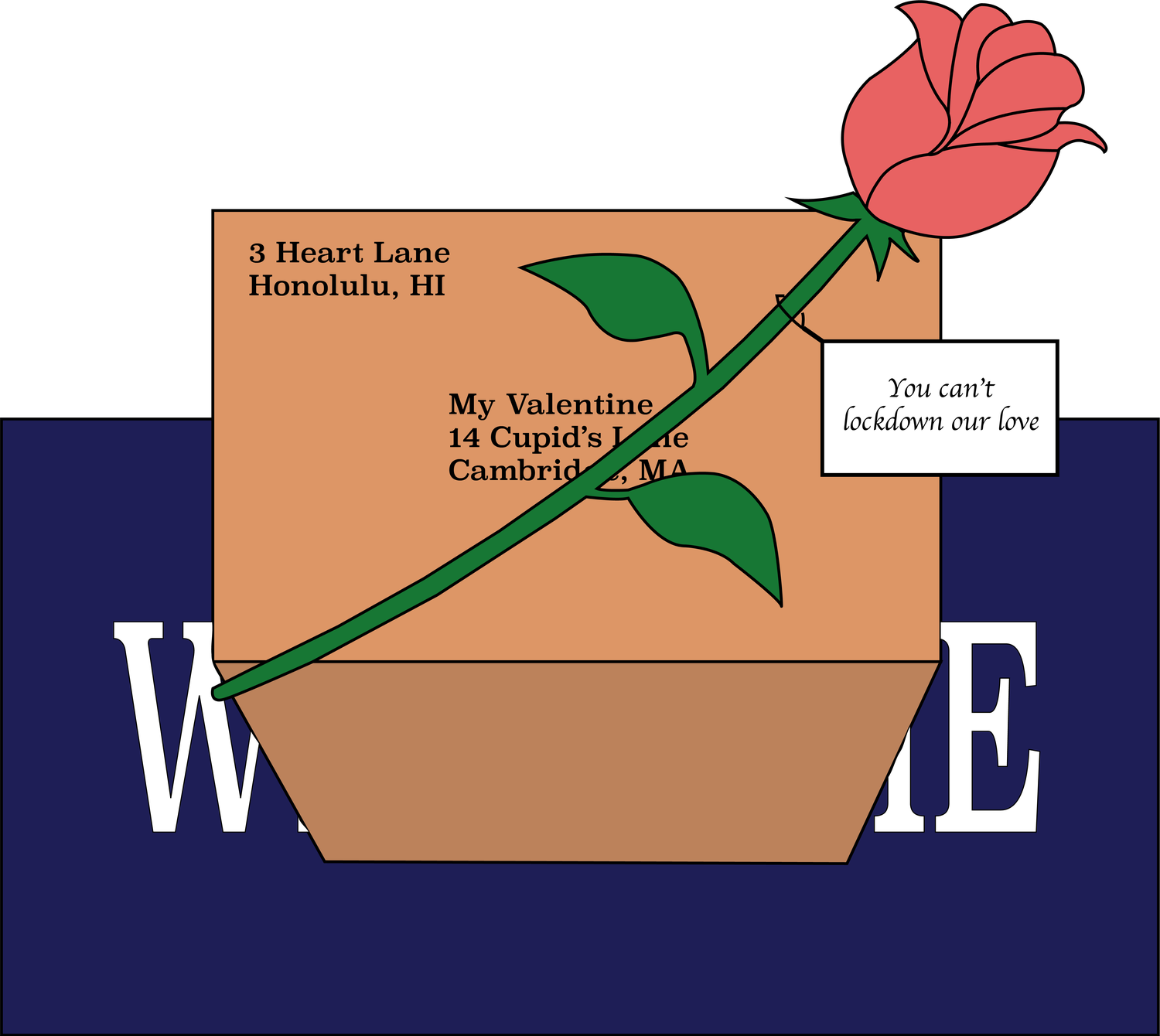 A Valentine's Day gift for those forced to embrace long distance romance. By Cat D. Hyeon

The pandemic’s disruptions to campus life also affected her decision. Unlike most freshmen, Hwang is on campus this spring, which has made it difficult to meet new friends.

Once the matches have been made, social distancing could affect their success. “For me personally, it’s really difficult to maintain a lot of relationships over the phone and never be able to see them in person,” Hwang says.

Physical distance is not the only challenge. “People have gotten a lot more awkward just because we’re not interacting with each other,” Espy adds. “I think in terms of actually being social, like physically face-to-face and not over Zoom, [there] is a learning curve.”

According to the Aphrodite Project, it is up to the participants to take necessary precautions if they choose to meet up. “We encourage people to meet at whatever capacity they are comfortable with,” says Chew. “We view ourselves more as connectors, and we allow [participants] to have the power of decision.”

Despite the challenges posed by the pandemic, the Aphrodite Project hopes that they can help alleviate the difficulties of distance by connecting students. “We’re hoping that on two fronts, trying to recreate that connection [to campus] and tying it back to that shared sense of identity, we can help people bridge that physical gap,” Low says.

“Look out for your matches on Saturday, Feb 13th! Fingers crossed.”