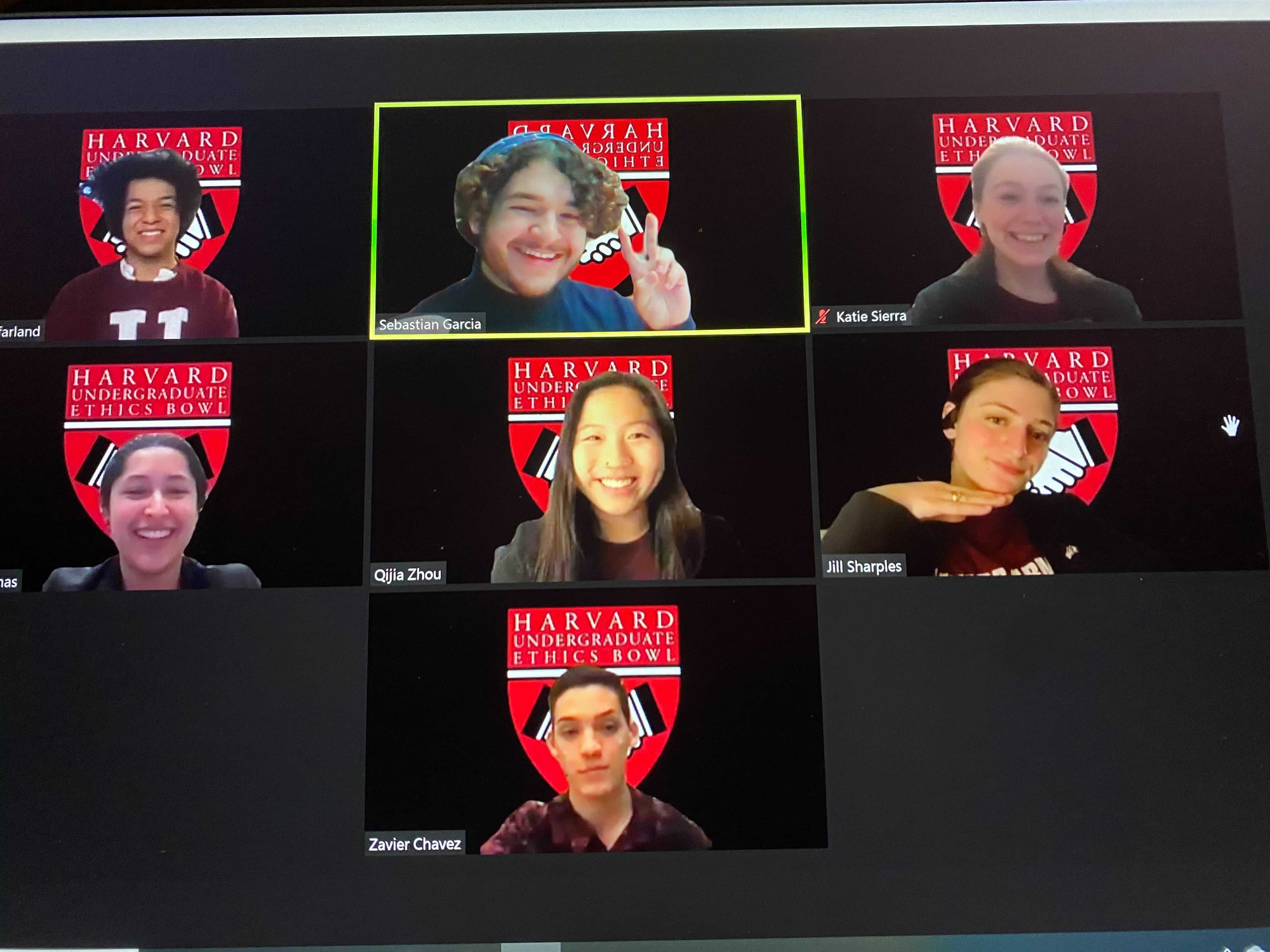 A New Take on Debate

The purpose of Ethics Bowl is to examine the ethical facets of real-world cases without the emphasis on speed, one-upmanship, or dogmatism that characterizes traditional debate.
By Sophia S. Liang

Jillian A. Sharples ’21 knows that she doesn’t have all the answers.

Sharples is the co-founder of the Harvard Undergraduate Ethics Bowl team, which analyzes questions of morality at competitions around the country. The purpose of Ethics Bowl is to examine the ethical facets of real-world cases without the emphasis on speed, one-upmanship, or dogmatism that characterizes traditional debate.

“The process has just given me a lot of humility,” Sharples says. “At this point I don’t even have a very cemented stance on any moral issue, because I always know that there’s something I’m not aware of and a perspective that I’ve not accessed.”

Sharples began competing in Ethics Bowl in high school, drawn to the inclusive community and opportunity for in-depth discussion. When she got to Harvard, she was unable to find a similar group that “embodied the spirit” of collaboration amongst people from a wide variety of backgrounds.

“After trying organizations such as Model UN, or even the John Adams Society at one point, I realized that there’s really no way to replicate Ethics Bowl,” Sharples says.

She founded the Harvard team in the spring of 2020, and it currently has around a dozen members. The onset of the pandemic has not hindered the club’s success — last month, seven members competed and placed in the quarterfinals of the Association for Practical and Professional Ethics’s 2020-21 national Intercollegiate Ethics Bowl, which was adapted to a virtual format.

For Craig W. McFarland Jr. ’24, co-vice president of the team, the team’s early success against schools with years of experience was “so incredibly insane.”

In advance of an Ethics Bowl competition, participants receive a casebook of morally ambiguous scenarios. Each match in the competition poses a question based on one of these cases; one such question asks, “Is the fact that an op-ed is written by a member of Congress sufficient grounds for publishing it, regardless of the merits of the claims made in the op-ed?” Both teams are then given time to discuss the question amongst themselves in breakout rooms, present their cases, respond to arguments made by the other team, and answer questions posed by the judges.

“You have to discuss issues in a manner that is both collegial and collaborative,” McFarland says. “It’s not necessarily about picking one side; it’s about doing the research and looking at all the intricacies.”

The resulting dynamic is as civil as one would expect — opposing teams frequently agree with each other and even give compliments for raising strong points. “In traditional debate you have to tear apart the other person’s argument,” says President Katie M. Sierra ’23, “whereas Ethics Bowl is more so about listening to them […] and offering critiques and edits instead of criticisms.”

In preparation for competitions, the team meets weekly and splits into small groups to probe each case from all angles. For members new to Ethics Bowl, the club offers a three-day training that teaches them ethical frameworks, such as consequentialism or virtue ethics. Sierra says that the club plans to bring philosophy education to younger students in the future, either through a lecture series in Cambridge-area schools or even via its own high school Ethics Bowl conference.

Sharples hopes that the growing presence of Ethics Bowl, both at Harvard and beyond, will work to “really make philosophy accessible and to help people understand how it is applicable in our daily lives.” Indeed, the ethical cases the team analyzes are highly relevant to current events: How do we balance the rights of the accuser with the rights of the accused? Is it possible to separate the Harry Potter series from J.K. Rowling’s transphobic comments? When should we reopen the economy amidst a public health crisis?

“One of my favorite things about Ethics Bowl is [that] the conversations that we have as a team are conversations you can have with quite literally anyone,” McFarland says. “There were many times where I talked about these cases with my suitemates, with my friends at dinner.”

The broad appeal of moral philosophy is reflected in the diverse interests of the Ethics Bowl team members, whose concentrations range from Integrative Biology to Social Studies to Physics. McFarland, who plans to obtain an M.D. and J.D., particularly enjoys discussing bioethics cases. Sierra is on a pre-veterinary track and believes the speaking and reasoning skills she’s gained will be applicable to discussing treatment plans with pet owners. And as a cadet in the Army Reserve Officers’ Training Corps, Sharples anticipates that her Ethics Bowl experience will help her reason through the moral dilemmas she’ll face as an officer in the military after graduation.

“It’s never been about winning for us,” Sharples says. “It’s just been about getting the most out of our discussions and really figuring out what we believe.”

—Contributing reporter Arjun Bhattarai can be reached at arjunbhattarai@college.harvard.edu