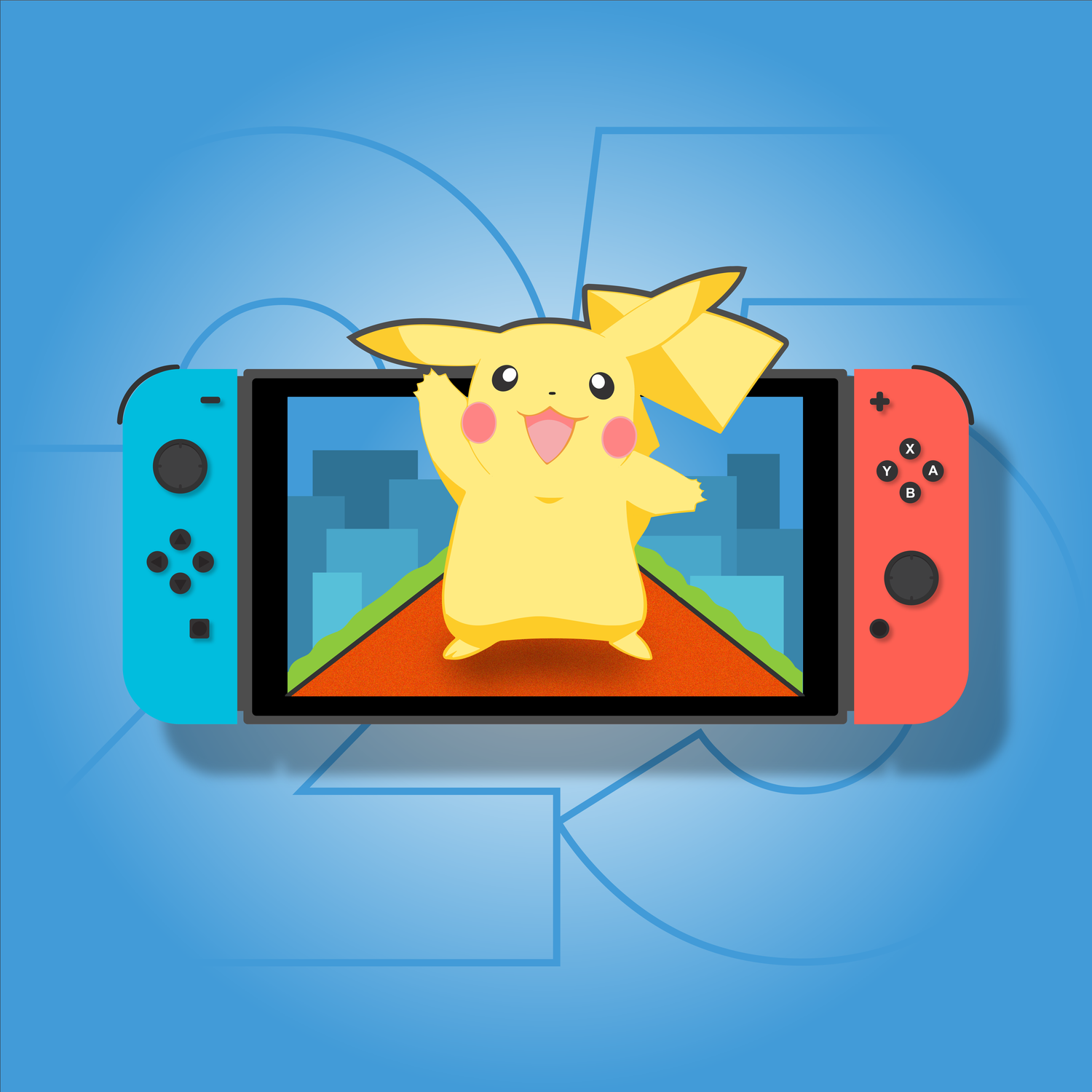 To All the Pokémon: Always and Forever

In many ways, I am still living the Pokémon dream, which caught me at a formative time in my life and shaped a significant part of my childhood. To say that I empathized with the characters in the TV show and the video games would be an understatement: I aimed to embody what it meant to be a Pokémon trainer.
By Felicia Y. Ho and Anisha Laumas

With a splash that flecks sparkling water droplets across the screen, Gyarados plunges into the deep. Plump, cotton candy-colored Jellicents levitate over a shimmering coral reef as Sharpedos charge past, gaping mouths full of sharp teeth. In the midst of the underwater scene, enclosed in a giant bubble and rapping his heart out, is Post Malone — that is, the Sims virtual version of him, wearing a sleek black tracksuit emblazoned with Pikachu’s tail, every last tattoo inked to perfection.

Last Friday night I and 2.6 million others hopped onto YouTube for Pokémon Day, kicking off a year-long celebration of 25 years of Pokémon. I looked around my sky blue childhood bedroom: A stack of Pokémon trading cards, some dog-eared and others still shiny, was nestled in the corner of a bookshelf alongside Jolteon and Pikachu plushies. Among these familiar relics of a younger Felicia, I settled into my chair to watch the concert, just a little surprised by the headliner artist.

And yet, it would prove to be an ideal mix of past and present: the pixelated Pokémon of my childhood years blown up into beautiful 3D models swimming alongside one of the “hippest” artists of our time.

Even after a quarter century, Nintendo’s Pokémon video games continue to capture the attention of aspiring trainers around the world. In the electronic gaming series, players act as Pokémon trainers. Each player trains a team of Pokémon in hopes of defeating other trainers with their own teams; these opponents include members of the Pokémon League known as Gym Leaders and the Elite Four. Meanwhile, players also work to complete the Pokédex by collecting all available Pokémon in a specific region. Being a trainer in the Pokémon universe requires the use of a fair bit of vernacular, most of which is centered around themes of training, battling, and capturing Pokémon.

In many ways, I am still living the Pokémon dream, which caught me at a formative time in my life and shaped a significant part of my childhood. To say that I empathized with the characters in the TV show and the video games would be an understatement: I aimed to embody what it meant to be a Pokémon trainer.

“I will never not love Pokémon,” I proudly declared from the backseat of our rental van to my older cousin.

“Anisha, there will come a day when you are not attached to your DS. Don’t worry, it happens to everyone,” she replied while rolling her eyes.

My eyes darted from the screen to meet hers. “No, there will never be a day that I don’t love Pokémon,” I said adamantly.

My gaze returned to the screen, re-focusing on the task at hand. I had poured hours upon hours into training for this battle; it would feel like a sunk cost if my lineup didn’t pull through. I had strategically stocked up on Hyper Potions and Full Restores — my healing items of choice — during a recent trip to the Poké Mart.

Despite comments from my front-seat family members to look out the window and take in the sights of the great outdoors, I remained engrossed in what was about to be the biggest moment of my career as a Pokémon trainer. I was certain that the scenery would be there the next time we drove home from the airport, but battling against the Johto Elite Four was a rare opportunity. The stakes were high, and I could not afford to lose.

In this world, I was the main character. As the character in the game ran through the Safari Zone grass and surfed around Whirl Islands, I felt as though it was me fulfilling my own desire for adventure. I fell in love all at once with the journey, the story, and the chance to immerse myself in a world that quickly became second-nature. The rush when you’re running through Ilex Forest and encounter a Pokémon you thought you’d never see is like going down a roller coaster constantly.

In Pokémon, there is no screen that says “You Win.” Unlike other games that have a concrete, achievable goal of “beating the game,” Pokémon relies on incremental targets that are constantly moving. After defeating all the Gym Leaders, Elite Four, the game Champion, and even completing the Pokédex, there are practically infinite ways to continue to train and battle — my journey never ended. Despite how much I had accomplished, I was always left wanting more.

Although console games are the beating heart of Pokémon, the spirit of being a Pokémon trainer extends beyond throwing Pokéballs and beating gyms on your own. In 1996, the first collectible trading cards, introduced as the Pokémon Trading Card Game, hit the shelves and brought Pokémon to cafeteria lunch tables, dinner tables, and school cubbies around the world. Soon after followed the Pokémon anime television series, first broadcast in 1997, featuring the indomitable, inspiring Ash Ketchum with his trusty partner-in-crime, Pikachu.

“Hard to find your way—”

My little brother and I belted out the theme song at the top of our lungs as Pokémon flew across the screen. It was 8:30 a.m. on a Saturday, which meant we were glued to the TV and watching Pokémon Black and White over breakfast. Twelve-year-old Felicia always looked forward to running side-by-side with Ash as he met new friends and said goodbye to the old from series to series. But now with my little brother in tow, waving his hands on his high chair expressing just how pumped he was, it became more than just a show.

It was an entire universe waiting in the spark of a Pokéball.

At Christmastime, we would make the drive up to New York City and burst through the doors of Nintendo New York, clamoring up the spiral red stairs to the second floor. There, we found our annual present always waiting: a gallery of Pokémon memorabilia. At home, we doodled and scribbled our dream Pokémon teams on yellow notepads, crying out moves as we acted out battles. Years later, keychains and figurines hang next to old pictures, these new items brought home from Tokyo’s Pokémon Center thousands of miles away.

This overload of merchandise is just a fraction of the ever-expanding Pokémon universe, which boasts everything from toothbrushes to Pop-Tarts. In all its forms, the message of Pokémon remains the same: Always keep training to be the very best you can be.

It’s true that the open-world concept introduced in the new Pokémon game may be heavily borrowed from the highly successful video game “The Legend of Zelda: Breath of the Wild.” Yes, the art style may become more cartoonish and shift from series to series. Yes, one plot may be less developed than the others.

The Pokémon fandom, a universe as expansive as the franchise’s own, has ranted, commented, and spoken at length about these concerns online. And while these conversations should be had, it may also come at the cost of failing to recognize that, just like kids, Pokémon evolves.

The game might not be the pixelated and twinkling soundtrack we remember it to be, nor may the gimmicky throw-and-capture system of the later games without the battles satisfy our inner trainers. But to survive, Pokémon must adapt and compete with a shifting base and increasingly competitive market vying for the limited attention span of 5 to 10-year-olds.

We are often guilty of turning away from the past and shunning childhood for fear of “embarrassment” as we grow older. It took us a couple extra late-night conversations in the dorm to figure out that we were both Pokémon trainers at heart. We both related to feeling outdated, cracking up at the sight of a chubby Gigantamax Pikachu or hairflipping Dugtrio and realizing we’d never used a Fairy type Pokémon in battle before.

After 25 years, Pokémon has remained relevant.. Even as the ever-evolving brand collaborates with mainstream artists like Post Malone, the memories of picking a starter Pokémon or desperately hoping to avoid encountering another Zubat are enough to foster close friendships like our own.

Because at the end of the day, it’s just you and your team, ready to catch ’em all and become the greatest Pokémon Master of all time.