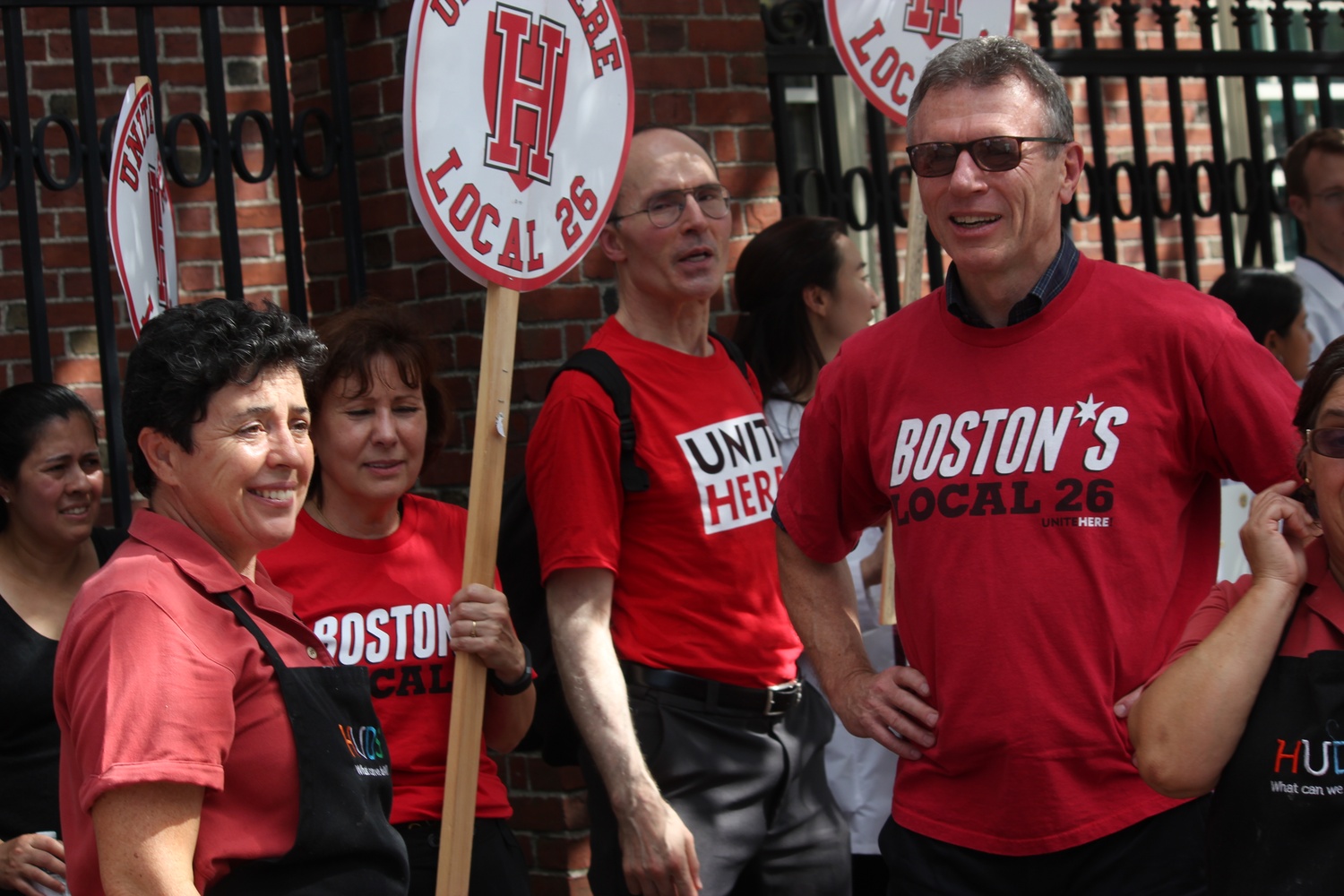 Harvard dining workers and their supporters at a rally during the union's strike in 2016. By Lauren A. Sierra
By Cara J. Chang and Meimei Xu, Crimson Staff Writers

Fearing reductions in the dining staff’s hours in Harvard College’s residential houses, UNITE HERE Local 26, the union representing dining employees at the University, has solicited the support of students through a flyer campaign as undergraduates return to campus.

The flyers allege Harvard is “using austerity politics to marginalize essential workers” after collecting tuition during the pandemic and growing its endowment through the fiscal year 2020.

“At the same time, Harvard is pushing food service workers to the sidelines by slashing full-time jobs and cutting hours – even though more students are on campus than ever,” the flyer reads.

In July, Harvard University Dining Services announced changes to its menus and hours beginning this fall, including full breakfast service at Annenberg and Quincy House, longer breakfast and dinner hours, and more kosher, halal, vegan, and vegetarian options. HUDS spokesperson Crista Martin wrote the new service model is designed “to continue to meet the changing needs of students and our community.”

“These updates will necessitate some modifications to staff schedules, but as we have shared with the union, those adjustments will be undertaken over time, with union input and in accordance with the union contract,” she wrote.

At the union’s request, Harvard shared preliminary schedules with Local 26 for the coming academic years, according to Martin.

Local 26 President Carlos Aramayo said in an interview that the union analyzed those proposed schedules and determined they would amount to a 20 percent cut in the number of full-time dining employees in residential houses and an 8 percent cut in total hours available.

Martin wrote it was “premature” to comment on the union’s analysis, especially as the preliminary schedules would not fully go into effect until the 2022-23 academic year. HUDS is currently piloting the new menus it announced in July so that the union and students can give feedback on the new model, according to Martin.

“It would be premature to comment on the proposed service models and draft schedules that have been shared with Local 26 during these negotiations,” Martin wrote. “As the University has shared with Local 26, these models and schedules are being piloted, and not implemented until fall 2022, with feedback and input from the union over the course of this academic year.”

Harvard committed to not laying off any current HUDS employee while the new model is being discussed this year, according to Martin. She added all current employees affected by the changes next year will be offered comparable positions, which HUDS believes will be possible given current projections.

Aramayo said he believes any cuts to workers’ hours contradicts Harvard’s commitment to an equitable and sustained recovery that supports its Black and brown workers.

“What we’re seeing is proposed changes to the schedule that will leave a fifth of the people who have full time positions in the dining halls working below full-time,” he said. “With Harvard putting out these proposed changes to the schedules and to the meals, a fifth of the people with full-time jobs in dining services are now facing profound uncertainty about the future, and they want to do something about it.”

Hakim Akendar, a pantry steward in Winthrop House who has worked at Harvard for more than 20 years, said he is afraid of losing 10 hours in shifts, meaning he would no longer be considered a full-time employee.

Reduced hours would strain his finances and his ability to support his family, Akendar added.

Charlene V. Almeida, a dining employee at Quincy House with more than two decades of experience at HUDS, wrote in a statement that she might not be able to make rent in Cambridge or feed her children on reduced hours. Citing Harvard’s financial stability during the pandemic, she called on the University to protect dining staff and their families who are “part of Harvard too.”

“Harvard claims to be committed to this community,” she wrote. “They should be making sure we all recover from COVID-19.”

“Once again, the richest university in the world is attempting to cut HUDS worker jobs and hours,” the organization wrote in a statement. “Rather than guarantee dining hall workers good paying and stable jobs, Harvard is making their futures uncertain with the threats of additional cuts. All this in the midst of a global pandemic and while our dining halls are short-staffed as it is.”

Local 26 ultimately hopes to avoid any cuts in hours for its employees.

“At the very least, a restoration of the number of hours that we had in 2019, if not an increase, is essential to have, from our perspective, a fair and equitable recovery coming out of Covid and to allay the fears and concerns of our members,” Aramayo said. “We’re always willing to discuss that with the University.”

The union’s shop stewards “are going to look at every possible action that we could take to punctuate how important this is to get resolved for our members over there,” he added.

In 2016 during their last round of contract negotiations, hundreds of HUDS workers went on strike for 22 days over compensation, health care, and job security, ultimately reaching a tentative agreement with the University.