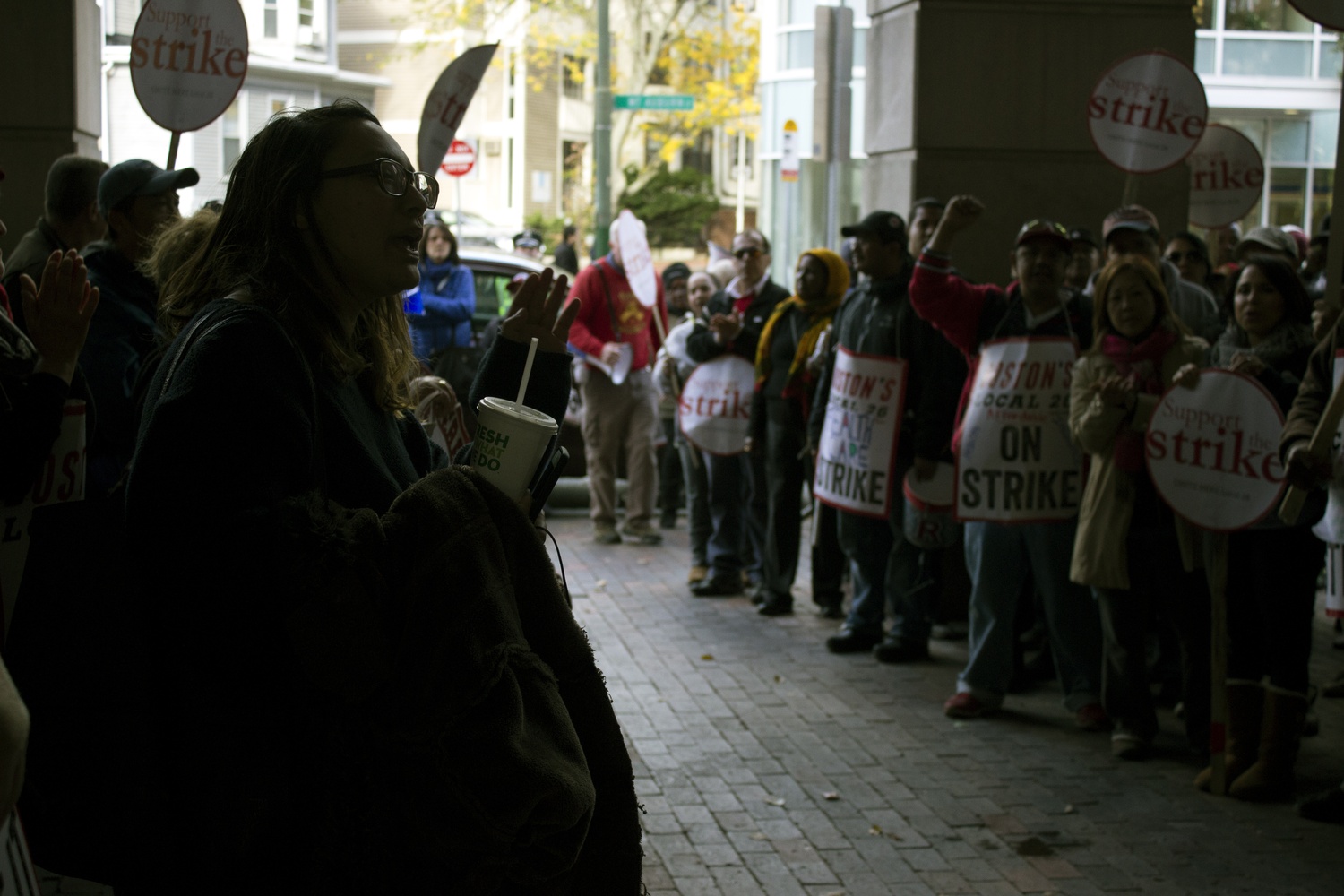 Harvard and its dining workers reached a “tentative agreement” around 1:05 a.m. Tuesday morning—the closest the two parties have come to a contract settlement during months of tense negotiations.

Brian Lang, president of UNITE HERE Local 26—the Boston-based union that represents Harvard’s dining workers—said the accord “accomplished all of our goals.” The deal is yet to be ratified; it must first be sent to a 30-member bargaining subcommittee Tuesday, Lang added, before the full membership of dining workers in the union vote on the deal Wednesday.

Though he declined to provide specific details on the agreement, Lang said HUDS employees could return to work as early as Thursday. According to an email sent last week by College Dean for Finance and Administration Sheila C. Thimba, it will take at most two days from the official end of the strike before the University’s dining halls can resume “normal operations.”

University spokesperson Tania deLuzuriaga wrote in an email that further details about the agreement would be forthcoming Tuesday morning.

“I’m feeling great about it, everything feels good,” dining services worker William H. Sawyer, who participated in the negotiation process, said at around 1:30 a.m. as he prepared to bike home. “The students and everyone behind us [have] been really inspirational… they kept us up, up, up, up and alive about this.”

“Even right now, they still here,” he added, pointing to the handful of students—all members of the Student Labor Action Movement—who remained outside the building, shouting and jumping up and down in celebration in the wee hours of the morning. “Everybody else gone home.”

In early October, HUDS workers launched an unprecedented strike—their first to take place during the academic year—calling on the University to increase wages and to maintain the current health benefits package it offers to dining hall employees. The last HUDS strike occurred more than 30 years ago.

The tentative agreement came after a day of intense picketing and rallying by both HUDS workers and student supporters. More than 500 students walked out of class—the second walkout of the strike—before marching to 124 Mt. Auburn St. for a sit-in that lasted late into the night, wrapping up around 10:30 p.m. at the urging of police officers.

By the time Harvard affiliates and union negotiators announced their tentative agreement, only a small cohort of students remained outside the building, along with a few HUDS workers. At one point during the night, students and strikers joined hands and marched in a circle, singing “We Shall Overcome.”

Abhinav Reddy, a School of Public Health student and graduate student union organizer, described the final moments of the night. Local 26’s bargaining team joined the demonstrators remaining outside, he said, and “everyone gathered back up and started chanting.”

“You could just see it on their faces before they even said anything,” Reddy said. “And everybody was like screaming and yelling, and then they said ‘we won, we got it.’”

SLAM member Grace F. Evans ’19, also present at the negotiations’ conclusion, said workers came out of the building visibly emotional before Lang announced to the assembled crowd of supporters that the union had “won.”

“It was a really emotional moment,” she said. “The workers were crying but Brian Lang was smiling, so we knew it was good news.”

Reflecting on the day’s events, Evans said she felt students had been important to HUDS workers’ success, a sentiment some workers echoed.

“It was definitely powerful that we were here,” Evans said, referring to the earlier lobby sit-in. “The negotiators looked down and they saw that.” 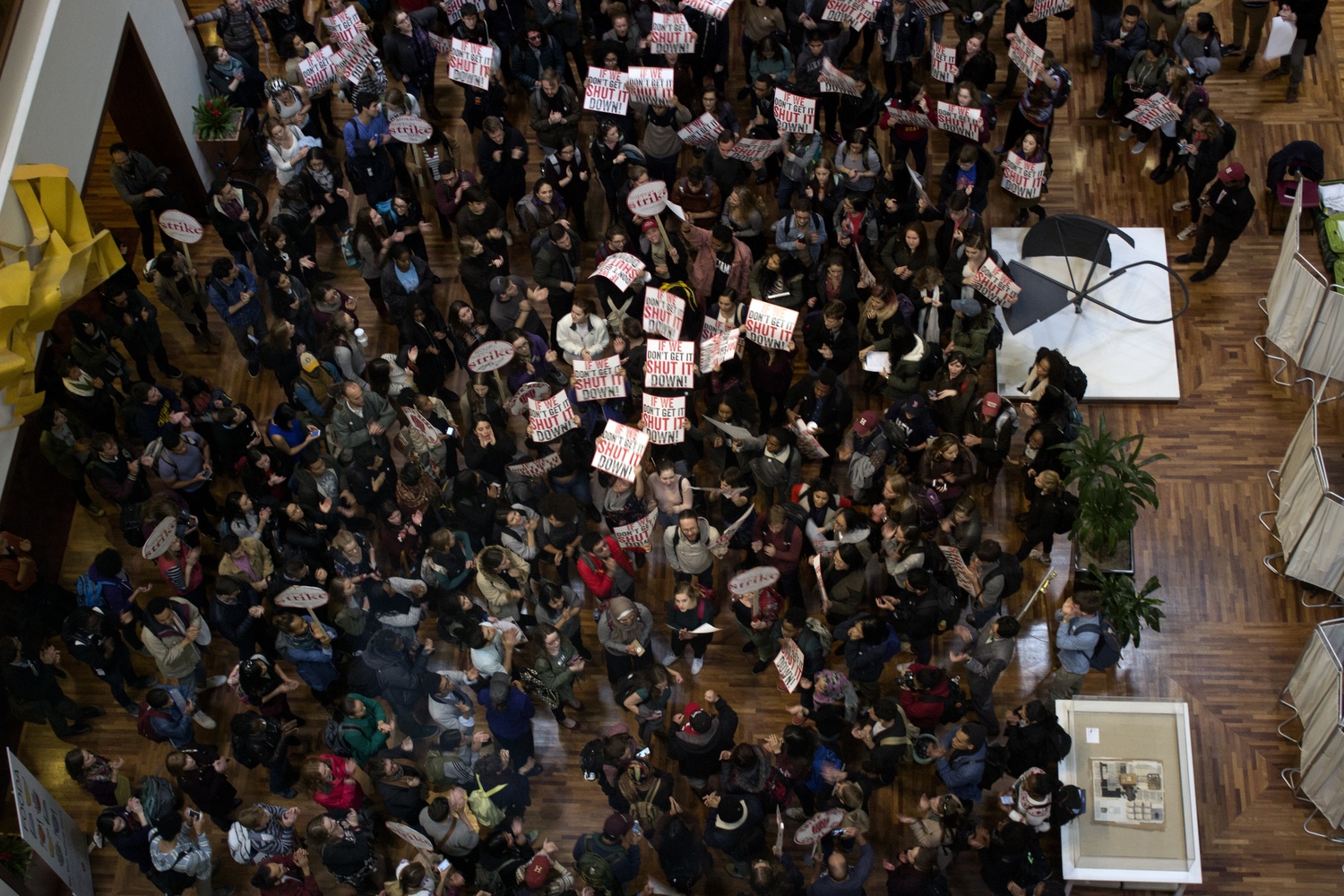 Hundreds of students and HUDS supporters marched into 124 Mount Auburn Street, home to several Harvard offices, where negotiations over contracts continue Monday afternoon. Communication between Harvard and UNITE HERE Local 26 is being facilitated through mediators. By Thomas W. Franck

Edward B. Childs, a dining services workers who picketed from 7 a.m Monday morning until around 1 a.m Tuesday, said he had suspected Monday’s negotiation session would be fruitful.

“Well, with the escalation we had this weekend and today, I was expecting something,” Childs said. “I knew something had to break.”