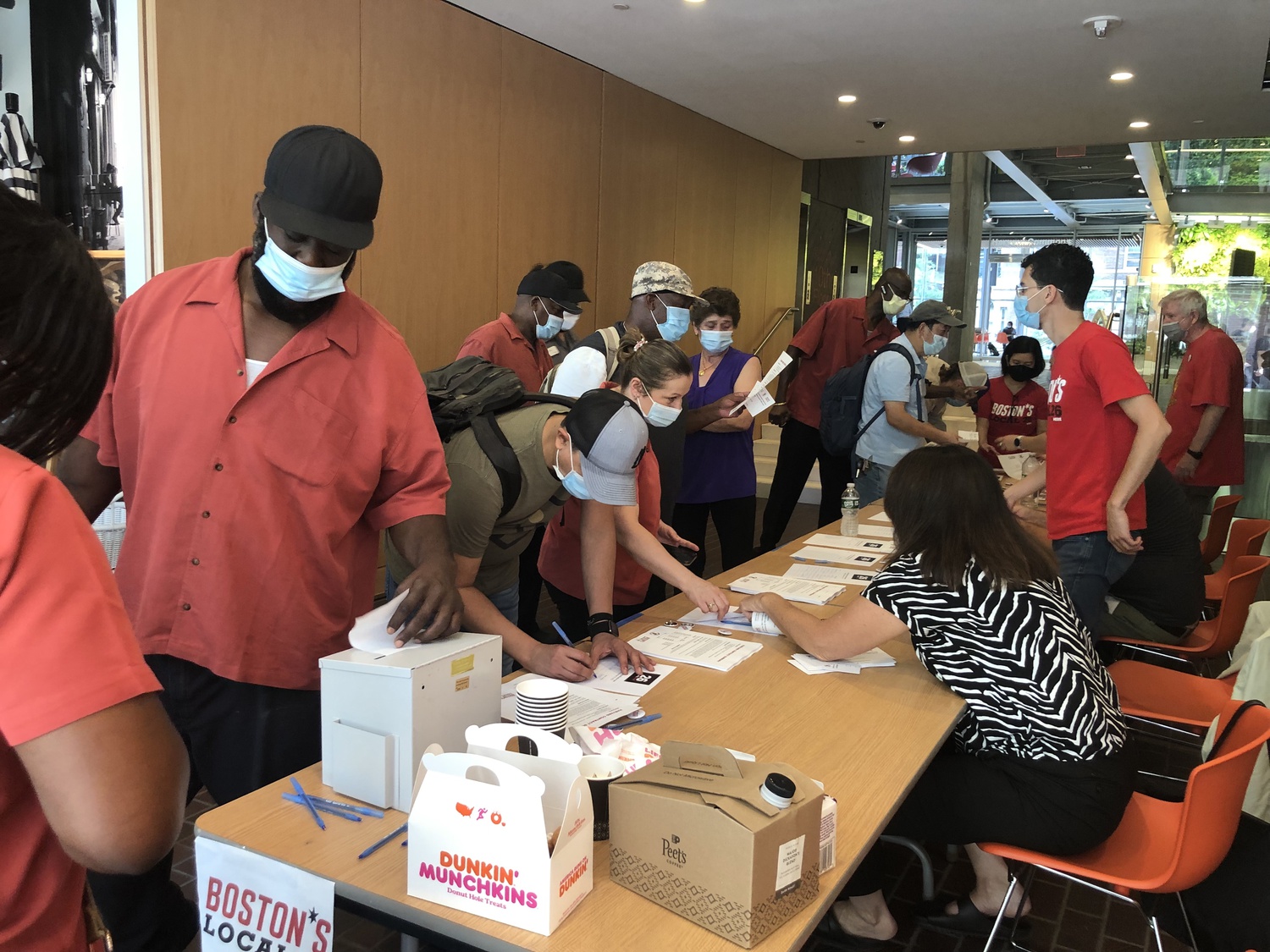 Members of Harvard's dining employees union, UNITE HERE Local 26, vote on whether to ratify the union's tentative agreement with the University Thursday in the Smith Campus Center. By Meimei Xu
By Cara J. Chang and Meimei Xu

The vote was 99.45 percent in favor of the tentative agreement the two parties reached last week. The contract includes a 15 percent increase in wages over the duration of the contract and increases to summer stipends, as well as a guarantee of working hours for current dining workers and jobs for some recently laid-off employees. The agreement also maintains the health care plan Local 26 won in 2016 after going on strike for 22 days, rocking campus.

“This contract makes sure Harvard’s dining hall workers are part of the economic recovery from COVID-19,” Michael Kramer, executive vice president of Local 26, said in a written statement.

Out of 364 votes, 362 union members voted in favor of the contract, easily clearing the simple majority threshold required for ratification.

“I am looking forward to the future with and for you to build our food systems and hospitality,” she wrote in an email obtained by The Crimson. “This is a big day for all of us, as one HUDS team, to progressively advance Harvard mission through our service.”

Under the new agreement, wages will be increased retroactive to June 21, with annual raises between 2.75 and 3.25 percent totaling $4.03 per hour over the five years, according to the union’s contract summary. The summer stipend, which pays HUDS employees over the vacation regardless of number of shifts they work, will also gradually increase from $3,000 to $3,800 by the end of the agreement.

The contract also maintains the union’s current health care coverage, which was a landmark achievement in its last round of contract negotiations. In 2016, Harvard agreed to pay insurance copays on the University staff and hourly insurance plans for HUDS employees and created a new premium contribution tier for employees who make less than $55,000 annually.

Additionally, HUDS will maintain the “authorized hours of every current HUDS employee” on the payroll as of Dec. 1, according to the union's contract summary.

The protections against layoffs and hours reductions come after the union alleged last month HUDS management was planning to cut 20 percent of full-time dining positions in the residential houses after reviewing the University’s proposed schedules for the next academic years. Harvard has since withdrawn those schedules.

Edwin J. Hinspeter, a Leverett House shop steward, said he believes the job security side letter is unprecedented for Local 26.

“It’s a really good contract for us,” he said after casting his ballot. “I believe the job security language — we’ve never had language like that before.”

Willie H. Moore, an assistant cook at Harvard Law School, said he voted yes because he wants to maintain his current position until retirement.

“I’ve been there 22 years,” he said. “I would love to retire there and continue my life.”

HUDS will also offer positions to employees formerly contracted from dining management company Restaurant Associates who were laid off from the Graduate School of Design and the Law School earlier this year, according to the Local 26 contract summary.

According to University spokesperson Jason A. Newton, Harvard is seeking to fill more than 50 positions, and former RA employees are welcome to apply.

Claudia J. Escobar, a former catering employee at HLS who was laid off from her position, said the contract may allow her to return to work as a Harvard employee.

“It is our right to [go] back to work because we [were] working during the pandemic, and I think we deserve to go back to work,” Escobar said after voting to ratify the contract.

Hilary J. Flores-Hebert, a Business School dining worker and volunteer at the polling station, said she decided to volunteer to help other members gain a contract that guaranteed greater job security. In addition, she said she supports the continued health care benefits and compensation increases.

“I think that’s super important, given that we’re essential workers, that we put so much of our time and effort to contribute to this community,” she said.