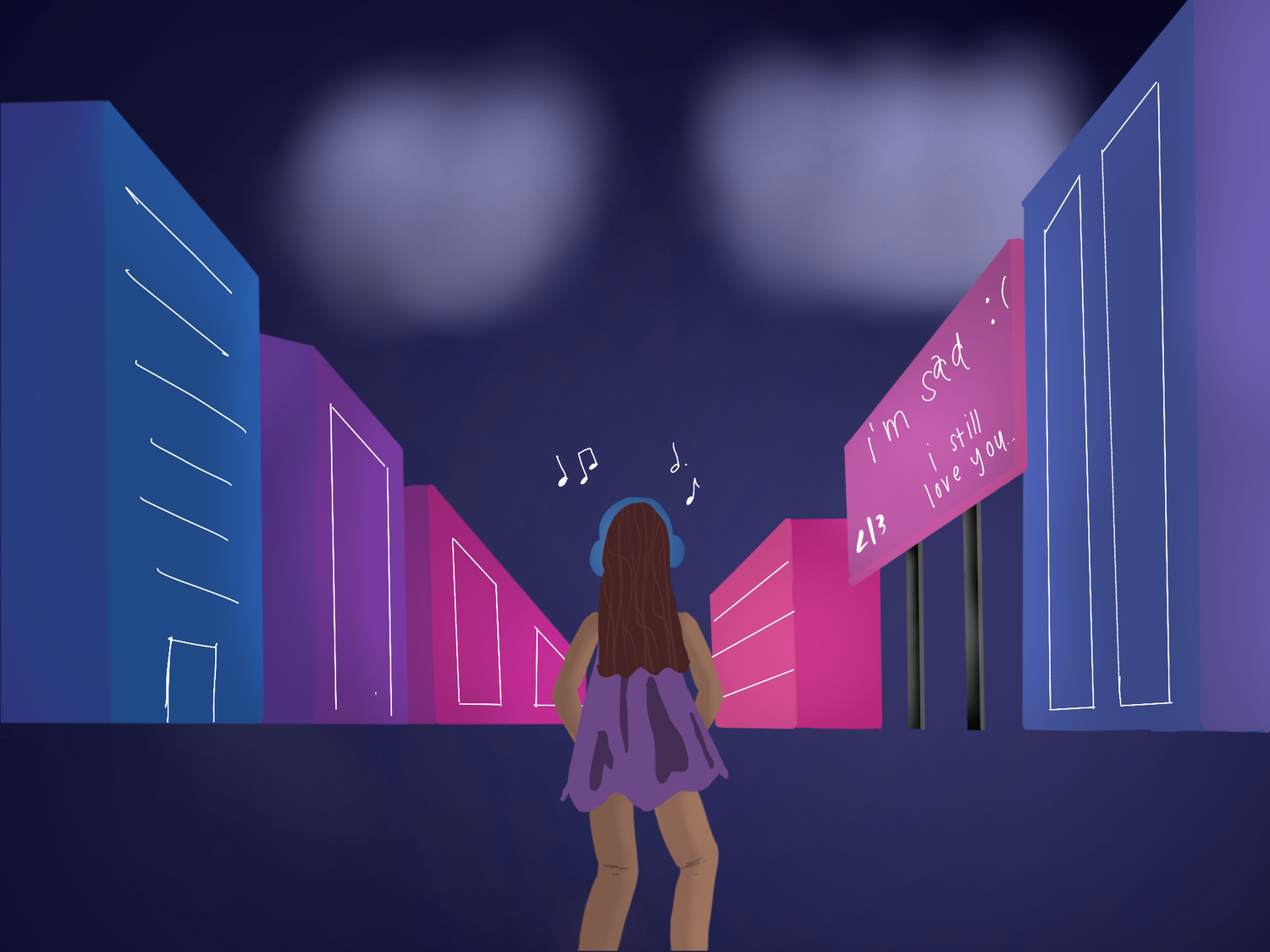 A drawing of a sad girl listening to music through her headphones, walking down a dark city street. By Samanta A. Mendoza-Lagunas
Advertisement
Advertisement

The aestheticization — dare I say fetishization — of female pain reaffirms the conditions that made girls sad in the first place. Simply put, the Sad Girl reeks of complacency.
By Amber H. Levis

As the leaves mature into arresting hues of red and gold and the annual pumpkin spice latte plague kicks into high gear, we herald the arrival of Sad Girl Autumn.

Sad Girl Autumn, as defined by the TikToks and Pinterest boards that emerge from hibernation this time of year, involves donning thick cardigans and a pair of Doc Martens, binging “Gilmore Girls,” and curling up with a book while listening to raindrops patter across your windowpane. However, in a departure from more dispassionate fall-themed cognates, such as dark academia and Christian Girl Autumn, Sad Girl Autumn coziness is embedded in melancholy.

But how is it that this beautiful season earns the epithet of “sad”?

The answer is simple: The sad girl aesthetic is not an annually adopted aesthetic, but rather, has come to define the culture we live in.

Sad Girl Autumn is simply a seasonal flavor of something we’ve become familiar with; it’s the same post-pretty cry mirror selfies posted on finstas year-round, but overlaid with a warm filter of creamy browns and oranges. It’s still the act of watching Sofia Coppola movies with a drink, but switching out the glass of red wine for a mug of Earl Grey. The Sad Girl aesthetic does not go out of season, but instead adapts to it.

The term “Sad Girl Autumn” was first popularized by Taylor Swift’s 2021 release, “All Too Well (Sad Girl Autumn Version),” a moody, pared-down acoustic arrangement of the original song from her album “Red.” Indeed, listening to the nostalgia of a Taylor Swift breakup tune, the haunting ache of Phoebe Bridgers’s finger-picked guitar, and, of course, Lana Del Rey’s breathy ballads, is an essential element to curating the Sad Girl aesthetic, with or without its autumnal flair.

On my Spotify recommended page, I’ve been occasionally (frequently) assaulted with the uber-popular playlist “sad girl starter pack.” It’s a Spotify-curated playlist with a regularly rotating selection of approximately 75 songs. As of publication, these songs range from the objectively sad (“It’s Not Just Me, It’s Everybody,” by Weyes Blood, a song about the alienation of living in modern society), to the dubiously sad (“Miracles,” by Alex G, a song that, indeed, reflects on the miracles of life). The one throughline I can identify is that they’re all generally mellow lo-fi songs which can be nebulously categorized as “indie pop.”

This is, I believe, the intention behind the playlist. It’s not meant to provide catharsis by evoking our most painful memories; rather, it’s meant to create an enduring mood. It’s an unchanging landscape set to the lowest frequency; it’s a solipsistic sadness that is static, and, therefore, comforting. It’s a melancholy we don’t quite want to shake off.

Beyond its sonic and visual appeal, some people value the Sad Girl aesthetic for its role in reframing sexual politics. In 2014, artist and critic Audrey Wollen made waves with her “Sad Girl Theory,” which asserts that the demonstration of female suffering is “an act of protest” against systems of masculine power.

In an interview with i-D, Wollen said, “I think that a sad girl’'s self-destruction, no matter how silent or commonplace, is a strategy for subverting those systems, for making the implicit violence visceral and visible, for implicating us all in her devastation.”

In The Independent, Merideth Clark poses a similar argument, contending that, unlike trends like the “clean girl aesthetic,” Sad Girl Autumn is inclusive and “reflective of a culture — music, movies, fashion, fragrances — that celebrates melancholy, nostalgia, and unapologetically female expressions of emotion.”

The implication is not only that melancholia belongs to women, but that therein rests the inclusivity of the Sad Girl aesthetic. This notion of radically inclusive feminine pain is echoed in the beloved Netflix dramedy “Sex Education.” In the penultimate episode of the second season, in an attempt to discover the identity of a graffiti artist who defaced the girls’ locker room, essentially every notable female character is placed in detention together, trapped until the culprit confesses or until they complete a joint assignment given to them by a teacher.

Their task? To define what “binds [them] together as women.” In a room of six women who differ not only in personality, but in sexuality, race, and socioeconomic status, they inevitably find their only common denominator to be their harassment at the hands of men. They leave the school sharing knowing glances and subdued smiles. Of course, their friendship won’t last the episode; it’s like it’s “The Breakfast Club” if it failed a fucked-up sort of Bechdel Test.

To this point, both Clark’s and Wollen’s celebration of the Sad Girl aesthetic lies in their belief that it is a testament to what it means to be a woman – that is, to be a subject of violence and oppression.

On this point, I don’t disagree with Wollen. Given the artifice of the gender binary, it has become difficult to define “womanhood” in any concrete way. You could argue in the same vein as Wollen and define womanhood by what it is not; to be a woman is to not be guarded against sexual and domestic violence. It is to not be in control of how your body is seen, used, and commodified by society. It is to not be respected on the grounds of your ability, but rather, measured by your adherence to societal beauty standards.

But the aestheticization — dare I say fetishization — of female pain reaffirms the conditions that made girls sad in the first place. Simply put, the Sad Girl reeks of complacency. She takes the sadness that has been handed down for generations and makes a home in it; she dresses it in a turtleneck and blankets it in dreamy, wistful soundscapes. She makes us see her sadness in all its glory without any real appeal for change. She doesn’t seem to want it — she’d live her life with the “sad girl starter pack” playing in the background in perpetuity.

Yes, the sadness is visible through hashtags, but it is not in any way subversive; rather than challenging the systems that oppress her, the Sad Girl beautifies her suffering, and represents a very white kind of beauty. Need I mention the sad-girl indie Swift-Bridgers-Del Rey trifecta again? While we can talk ad nauseam about the radical inclusivity of feminine pain, we don’t see this inclusivity reflected in all those aesthetic mood boards because it is typically whiteness that we categorize as aesthetic.

And, of course, the commercialization of the Sad Girl has erased any kind of depth from her complicated identity.

The “sad girl starter pack,” at least, has nothing to do with the injuries incurred by the patriarchy and has everything to do with “sitting on your green velvet couch, thinking of her <3,” as the Spotify playlist description currently reads. This description changes often, though the meaning stays the same. A few months ago, it read: “sapphic songs that described your music taste as ‘yearning.’” The cover shows two silhouetted women making out.

Maybe the sapphic spin is a half-hearted attempt to move on from defining women by their relations with men (though we still can’t let go of the need to define them through their relationships). Regardless, it’s a far cry from Wollen’s Sad Girl.

In an article explaining Sad Girl Autumn for Elle subscribers, Ariana Yaptangco asks: “Wait, why are we sad again?” and answers, “There are so many things to choose from! Sad that the world is on fire, literally and figuratively. Sad that summer is over. Sad it’'s getting cold out. Sad it’'s cuffing season and you’re still single. Sad your summer fling has ended. Sad the year is pretty much over. The possibilities are endless!”

At the end of Yaptangco’s article is a sad girl starter pack that you can shop from. The cheapest item is a $60 candle.

Aside from the glaringly false equivalence of the end of the world with the end of summer, the positioning of these sources of sadness as hot new accessories falls in line with the kind of thinking that leads to a corporate playlist called “sad girl starter pack.” It’s a sadness with all the glamor, but without the teeth, bought at the low price of $9.99 a month. Frankly, sad sells.

Perhaps Lucy Dacus, who has two songs featured in the “sad girl starter pack,” put it best when she tweeted: “Sadness can be meaningful but I got a bone to pick with the ‘sad girl indie’ genre, not the music that gets labeled as that, but the classification and commodification and perpetual expectation of women’s pain, also I don’t think my songs are sad, anyways good morning.”

Why are we asking Elle for reasons to be sad? Are we donning the Sad Girl cable-knit sweater for some illusion of emotional depth? Because we do just the opposite when we create identities out of non-descriptive platitudes. We flatten the peaks and valleys of life, minimizing its fluorescent ecstasy, its volatile passions, its frivolous absurdity. We forget the peace of taking a morning walk and the uncomplicated beauty of an oak tree changing colors, shedding old leaves.