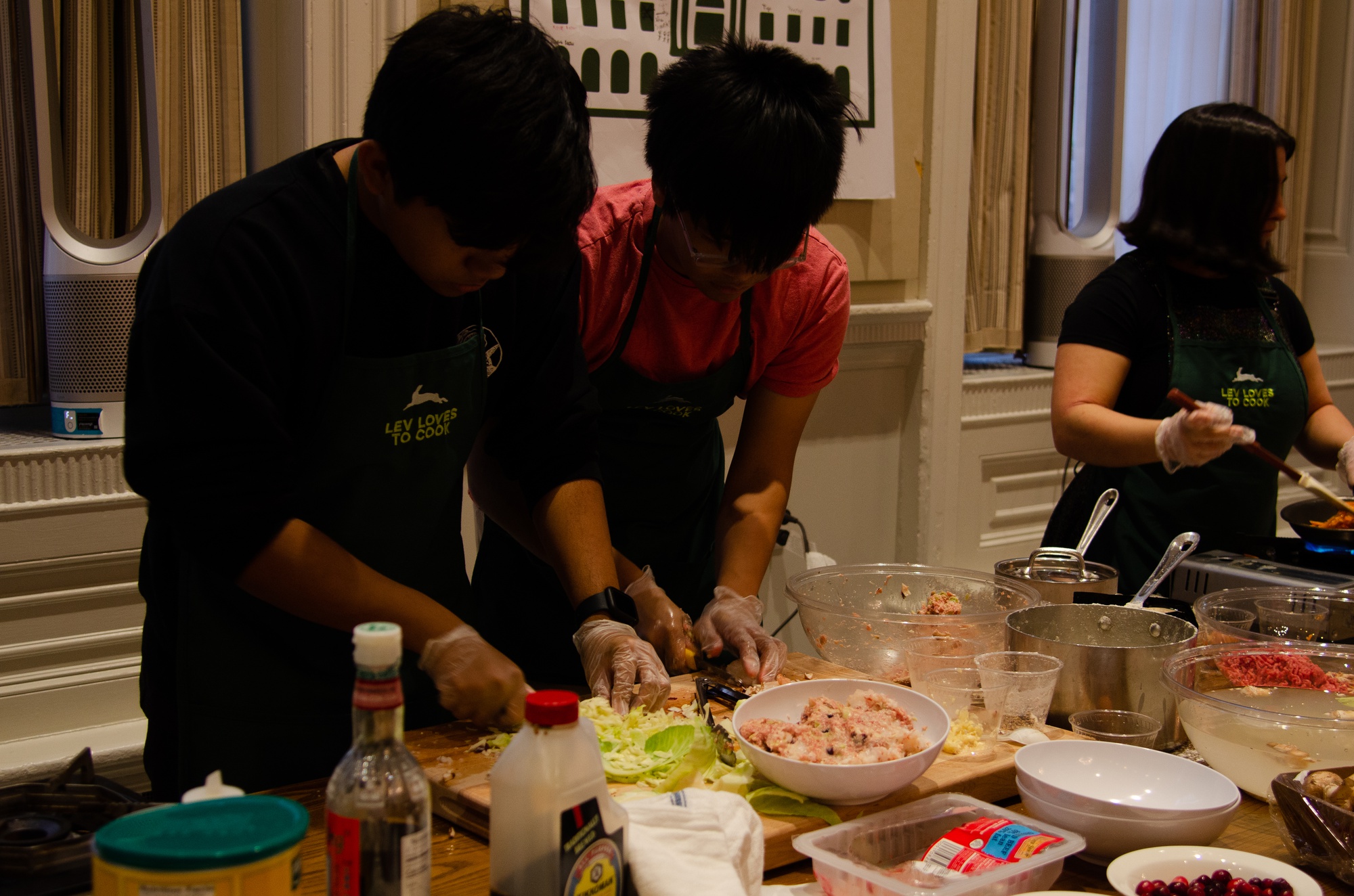 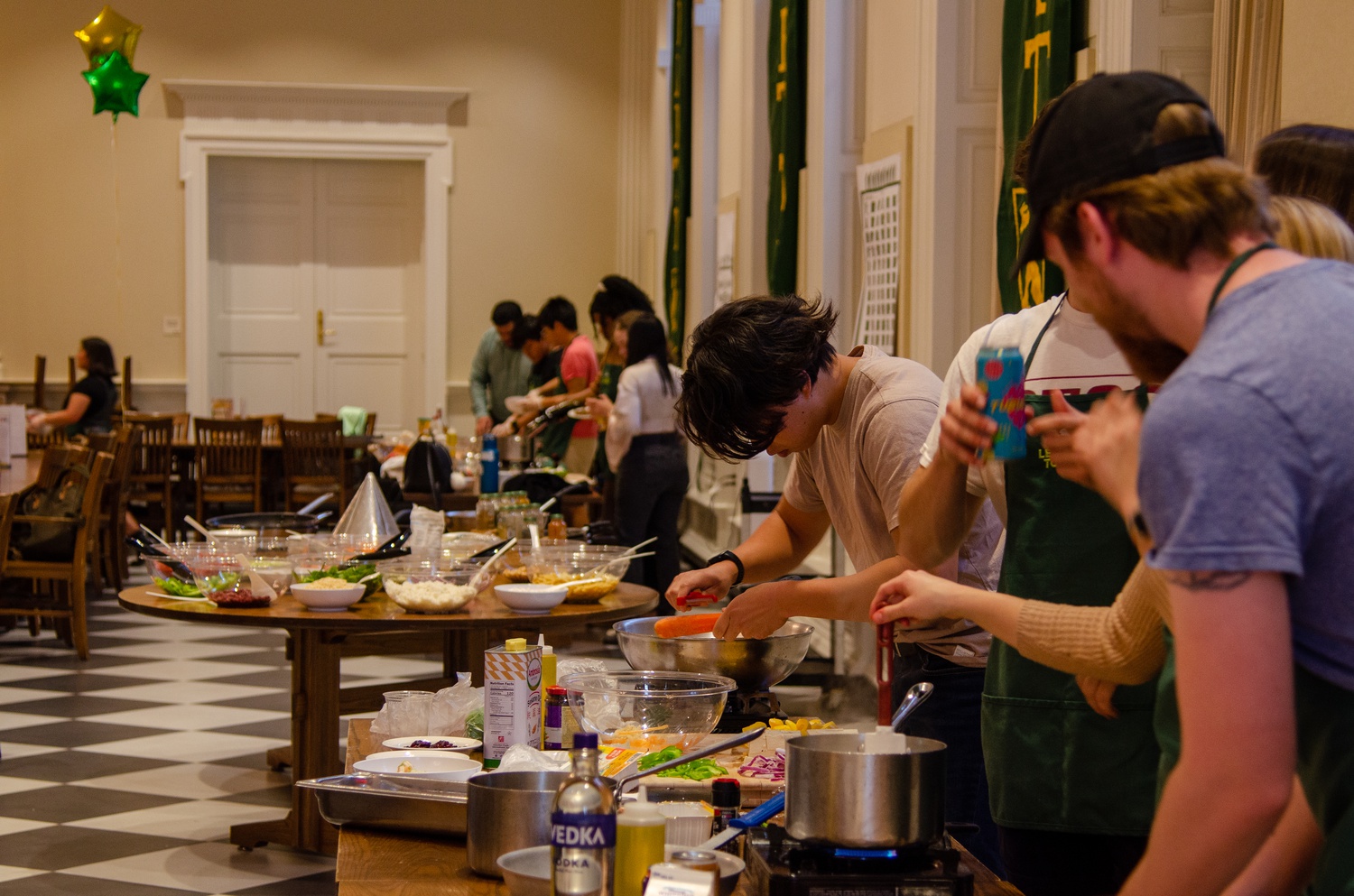 We stopped in to watch a night at Hare’s Kitchen. Four teams lined up behind long oak tables each fashioned with a burner, a nesting of pots and pans, a cutting board, and a dream — cooking the best dish of the night to win a home-cooked meal by none other than interim Leverett faculty deans Daniel G. Deschler and Eileen E. Reynolds ’86.

This new house tradition comes amid turbulence in Leverett House leadership, which recently saw the sudden departure of its former deans. Brian D. Farrell and Irina P. Ferreras, who served as the Leverett deans from fall semester of 2019 to this past June, were criticized for workplace hostility and discouraging house community before stepping down a year before the end of their term. Deschler and Reynolds have worked to build the Leverett spirit again with events that bring students together (or in this case, make them battle against each other).

“The new interim deans have made it their initiative here to really knit together a wonderful, brilliant, funny and light-hearted Leverett House,” says Leverett junior and the night’s commentator, Chinyere S. C. “C.J.” Obasi ’24.

The idea came out of “Lev Loves to Cook,” a pandemic tradition of holding virtual cooking classes for Leverett students. Resident Tutor Heather M. Flaherty, who works on the committee for the Leverett Student Kitchen, helped to spearhead the new in-person cooking competition, since the student kitchen could only host a limited number of students at a time.

For Reynolds, a love of cooking shows and a lifetime of cooking naturally evolved into Hare’s Kitchen. Reynolds says she looks forward to hosting the winners of tonight’s competition for a home-cooked meal. “There’ll be a cocktail course, and maybe that will take the edge off of having to perform as admirably in the main course,” she says, referring to the pressure of living up to the great skill displayed by the contestants. 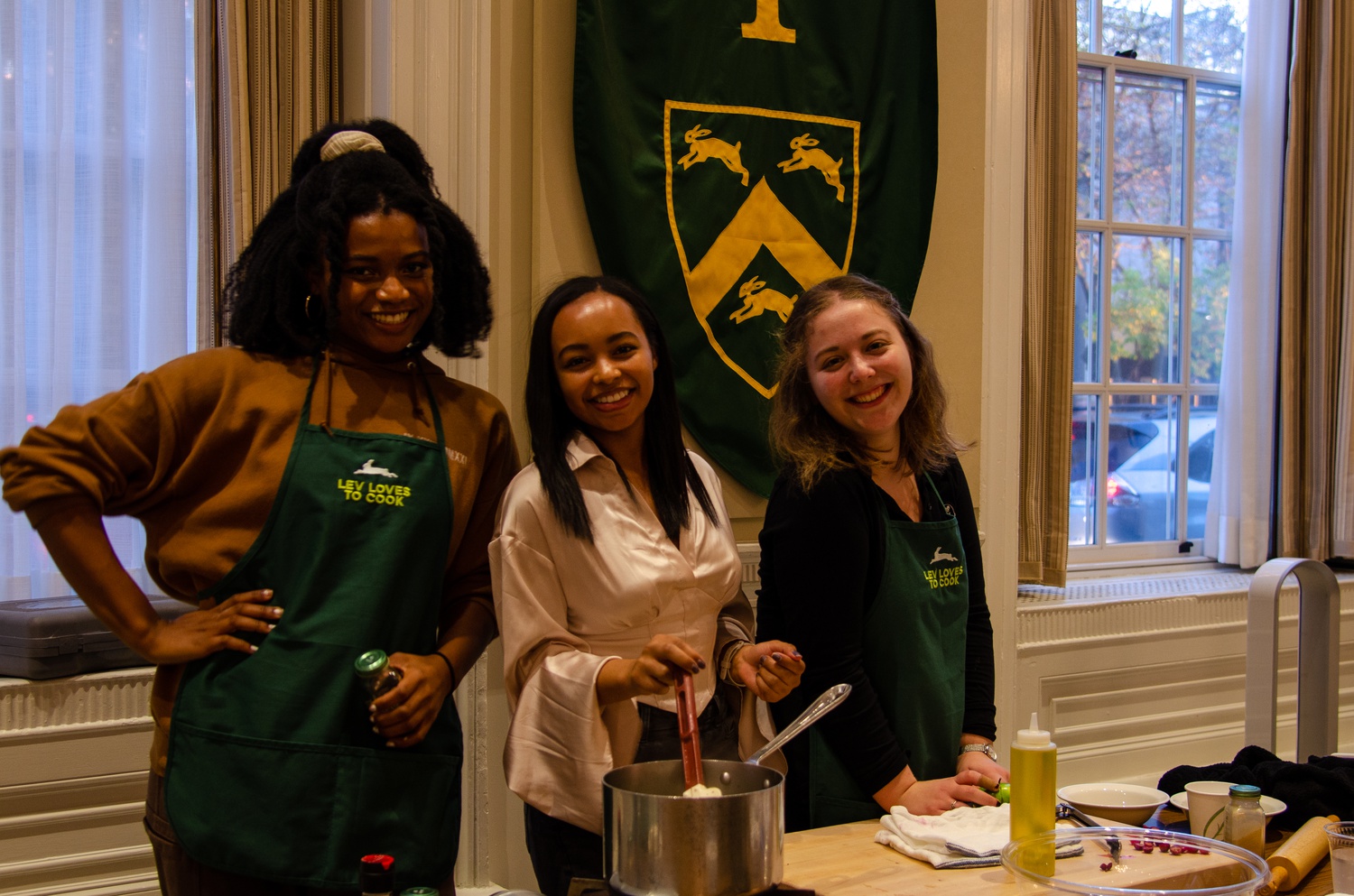 Contestants in the Hare's Kitchen cooking competition. By Joey Huang

We talk first to team Dreams and NightHares, made up of four blocking group members, as they chop shallots with surgical precision. Tonight’s dish is their rendition of pasta alla vodka, one they perfected during their year living together off-campus.

“It’s our signature dish. We make it all the time as a blocking group,” says team member Rio M. McLellan ’22-23.

Next to them is Alan O. Wang ’24, cooking a vegan stir fry. That part is easy for him. The challenge comes when the secret ingredient, which every group has to incorporate into their dish, is unveiled — cranberries. Yet this twist is no match for Wang, who goes right along simmering them down to add to his sauce.

As we grill the contestants on their best techniques, Deschler runs back and forth from the kitchen wielding strainers, red wine vinegar, or anything the contestants need to achieve gastronomical greatness.

We stop by the tables of The Four Musketeers and Ily Loves to Cook making handcrafted dumplings and a fall-flavored soup, respectively. The Musketeers operate in succession, with their sous chef Kevin Liu ’23 leading the way. One team member mixes the filling, another rolls the dough into a flat circle, and Liu folds the dumplings with care.

The Ily Loves to Cook team argues about the best practice for chopping cranberries as their bubbling broth boiled on. “She’s one half my sous chef, and one half my saboteur,” Cierra M. Brown ’23 says of her teammate Maureen Clare ’23.

Now hungry, we wander to the Leverett servery to see what was on the HUDS menu, stopping in our tracks to find a full pan of golden brown monkey bread — another Leverett tradition revived by the interim faculty deans. Paired with whipped cream and berries, the combination is enough to make us forget about Annenberg for a few bites.

At this point, things are picking up — it’s getting warmer, and Deschler opens a window. As Reynolds worries about setting off a fire alarm, a hot pan sizzles wildly. Sauces are reducing, breads are roasting, and someone opens a bottle of vodka. (Don’t worry, it’s for the pasta)

As Maggie Vallejo ’23, a contestant on the Four Musketeers, packs the dumpling dough with filling, a teammate pulls back her hair. The team is on a tight schedule; they have to leave for section in a few minutes.

The final minutes wane to a close. Judges line up at the table in front of the dishes, which have been plated with precision. Each is impressive in both taste and presentation, and each uses the secret ingredient in a creative way.

But there must be a winner. As the judges confer, we try the delicious leftovers of each team. Soon, a winner is revealed.

For their impressive technique and charming presentation, the Four Musketeers and their domineering dumplings come out on top. Though, at this point, they’ve already left for section.