Saturday will mark the 138th gridiron meeting between Harvard and Yale — a rivalry whose results have been worthy of two of the most storied programs in football.
By Griffin Wong 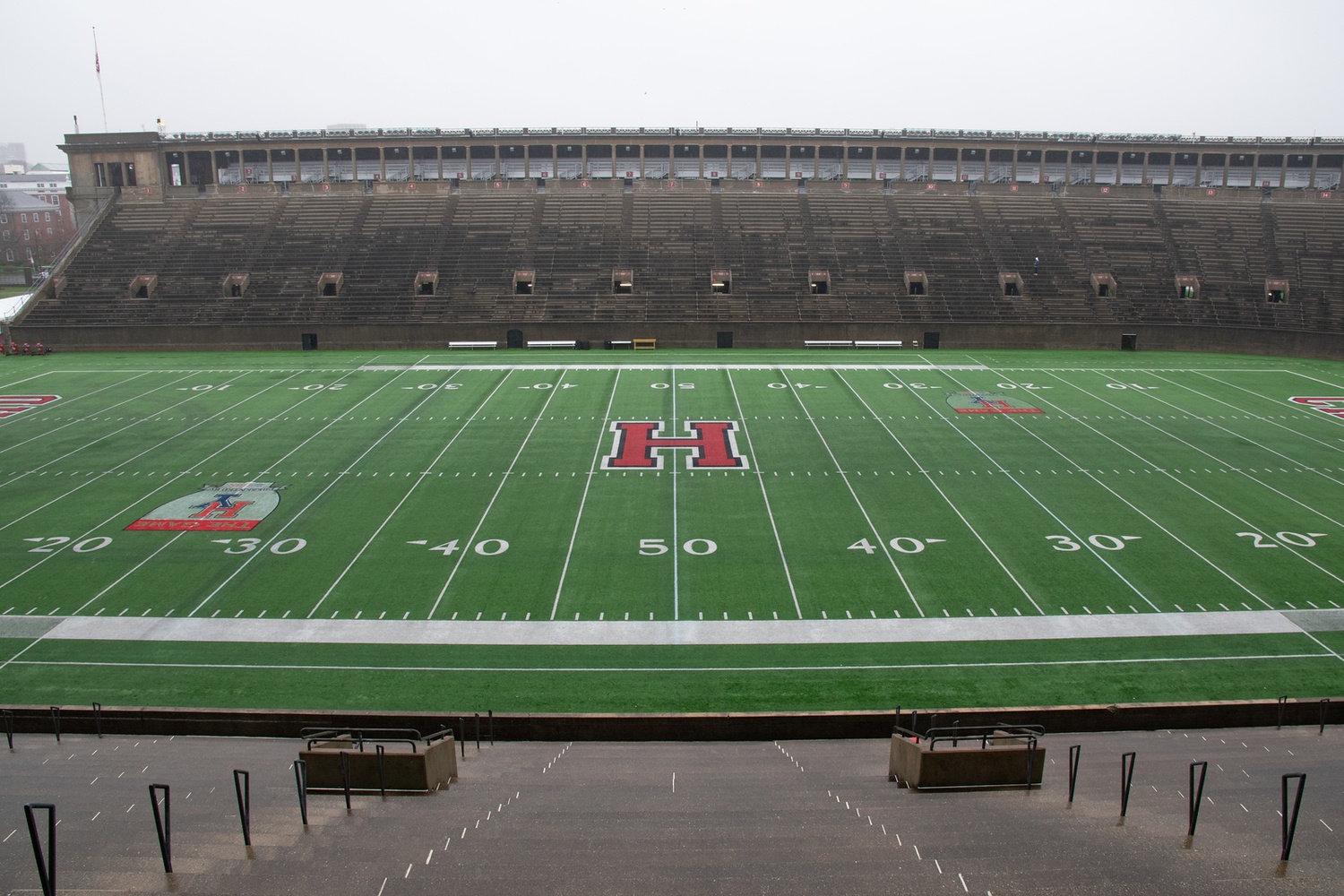 Harvard Stadium is set to host The Game for the first time since 2016. By Julian J. Giordano

1968. 2005. 2018. And, after a miraculous, improbable fourth-quarter comeback that saw senior wide receiver Kym Wimberly leave his lasting mark on the Harvard history books, 2021.

These years saw some of the most legendary games in the history of Harvard-Yale, the second-oldest rivalry in college football and a matchup which requires only a two-word moniker: The Game. Saturday will mark the 138th gridiron meeting between Harvard and Yale — a rivalry whose results have been worthy of two of the most storied programs in football. Yale leads the series, 68-61-8, but since the inception of Ivy League play in 1956, the Crimson has had the edge, 37-27-1.

Time and time again, the season-ending matchup has held high stakes. In 1974, Harvard notched a 21-16 victory to earn a share of the Ivy League title with the Bulldogs. In 2014, ESPN’s College Gameday pregame show traveled to Cambridge as the Crimson took on Yale for conference supremacy — and won, 34-21. And in 2019, Harvard had the opportunity to play spoiler as the Bulldogs chased a championship, but lost in crushing fashion in double-overtime, 50-43.

This year, the stakes are as high as ever.

An Ancient Eight title is again on the line for both Harvard and Yale when they face off on Saturday afternoon at Harvard Stadium. If the Bulldogs (7-2, 5-1) win, at least a share of the title is theirs, regardless of the result in the concurrent matchup between Princeton (8-1, 5-1) and Penn (7-2, 4-2), which kicks off at 1 p.m. on Saturday, one hour after The Game. Harvard (6-3, 4-2), meanwhile, will need a little help — the Quakers must upset the Tigers in Princeton, N.J., for Harvard to clinch a title this year. But if both Penn and the Crimson come out victorious, all four teams would share the Ivy League championship — which would mark the first time in history that more than three teams have finished atop the conference.

After relinquishing Penn 37-14 in its most complete performance of the season, Harvard will head into The Game peaking at the right time. At Penn, senior quarterback Charlie Dean produced the finest game of his career, completing 29 of his 38 passes for 316 yards, four touchdowns, and no interceptions. Meanwhile, senior running back Aidan Borguet inched closer to the single-season rushing record held by Clifton Dawson ’07. After adding 117 yards on 20 carries against the Quakers, the five-foot-ten back will need 183 against Yale to secure the most proficient rushing season ever for a Crimson player. While a gargantuan task, Borguet accounted for 179 in a 28-13 win over Dartmouth on Oct. 29 and could meet the moment again. 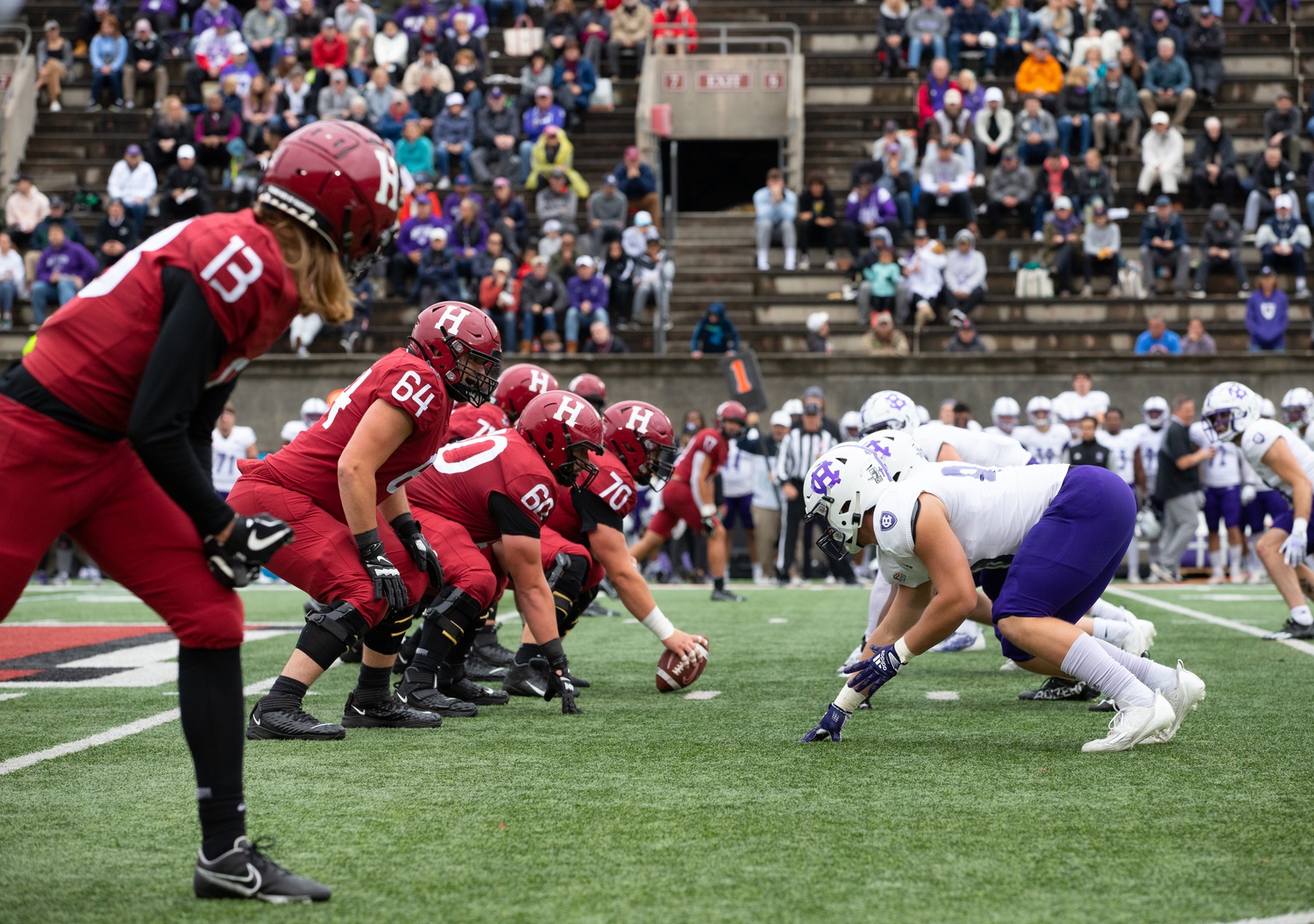 The Crimson faces off against Holy Cross on Oct. 1, 2022. Harvard lost 21-30 at home in Cambridge, M.A. By Angela Dela Cruz
Advertisement

But as good as Harvard looks headed into the much-anticipated matchup, the Bulldogs arguably look better. Last Saturday, Yale welcomed undefeated Princeton to New Haven, Conn., and emerged with a 24-20 stunner. Its performance wasn’t perfect — junior quarterback Nolan Grooms threw for just 65 yards and completed less than half his passes — but it was good enough to thwart a Tigers team that had come into Harvard Stadium and left the Crimson looking foolish in a 37-10 win three weeks earlier.

“They’re consistent,” Dean said of the Yale defense. “They don’t make a lot of mistakes. They’re where they're supposed to be. And sometimes, watching Princeton’s offense, they capitalize a lot when defenses made mistakes. And Yale’s defense played a pretty clean game against them. That was the biggest deciding factor, that Princeton made more mistakes than Yale did.”

For Harvard to come out victorious on Saturday, it will likely need a standout performance from its star running back, especially given that it may be short-handed in its wide receiver corps. Wimberly, who had been the Ivy League’s top receiver early in the season, suffered an ankle injury in the win over Dartmouth and missed the remainder of that contest and the next week’s loss to Columbia. Then, after returning to the field in Philadelphia, he went down with an arm injury on the Crimson’s first play from scrimmage and was out for the rest of the game. If he is unable to play on Saturday, it would not only mark the end of the star receiver’s Harvard career, but also leave a gaping hole in the passing game.

Wimberly’s potential absence from Saturday’s game would require the rest of the Crimson’s offensive playmakers to step up. Last Saturday, nine different receivers caught at least one pass, and with sophomore wide receiver Ledger Hatch also missing the Columbia contest, a slew of different Harvard players have stepped up: first-year wide receiver Cooper Barkate and senior wide receivers Jack Bill and Joe Young. All three wideouts will be crucial against Yale, as well as junior tight end Tyler Neville, the team’s third-leading target, with 24 catches, 276 yards, and three scores. Additionally, the offensive line will be tasked with opening up holes for Borguet and protecting Dean from a strong Yale pass-rush.

“Aidan wouldn’t have [his stellar stats] without the o-line,” Dean said. “Our wide receivers wouldn’t be able to catch the ball if the o-line didn’t give me time to throw. They’re the unsung heroes of the season.” 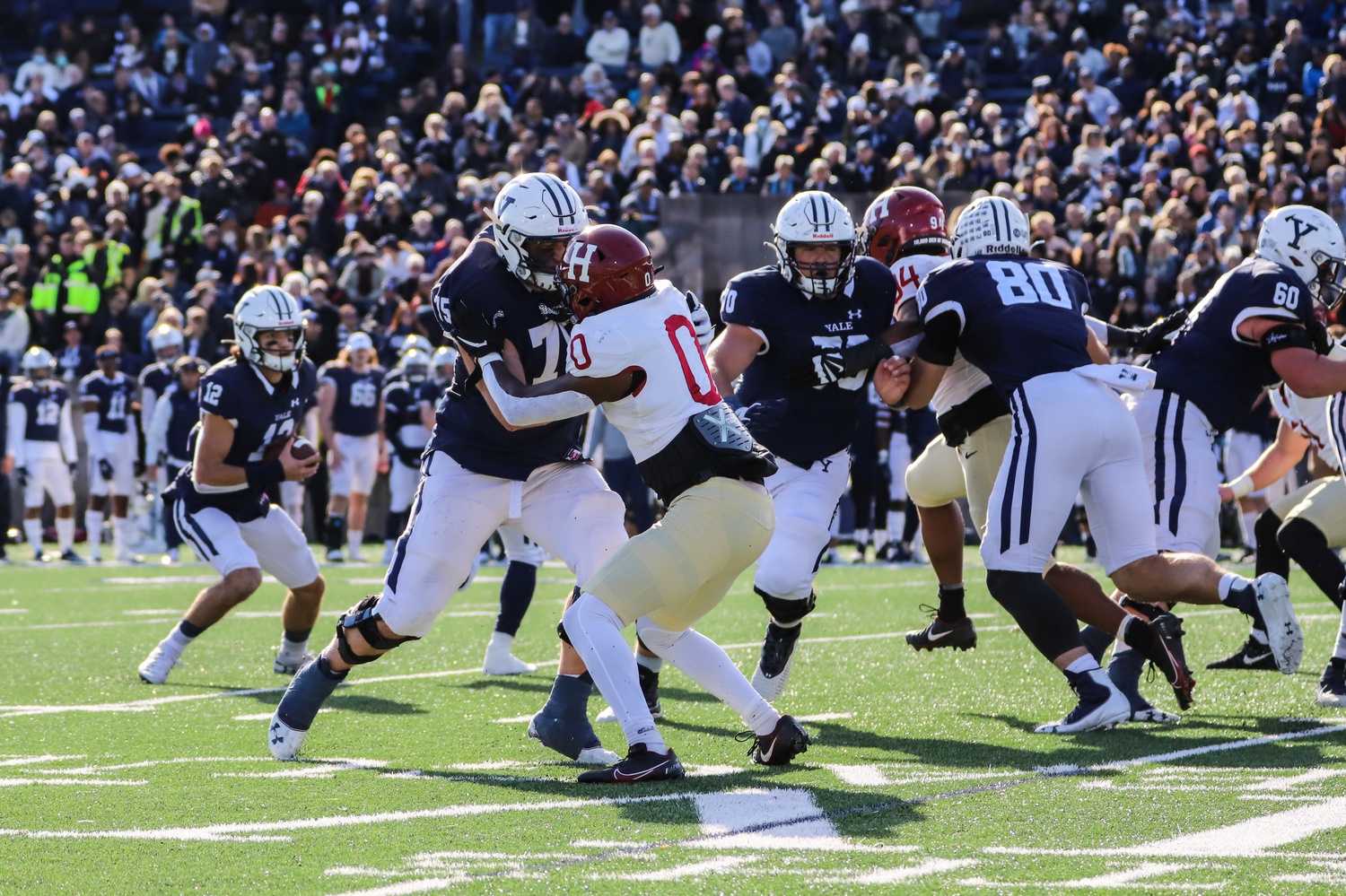 The offensive line has allowed just eight sacks so far this season, tied for the eighth-fewest in the FCS. It will have to be stellar against a Bulldogs defensive front that has recorded 23 sacks so far, good for 15th best in the country. They are led by a two-headed monster in defensive ends Clay Patterson (5.5 sacks) and Reid Nickerson (5.0), the only duo to each have five or more sacks in the Ivy League. Nickerson was especially problematic last year against Harvard, recording two sacks and three tackles for a loss. Owing to its stout front four, Yale has been particularly solid against the run, allowing just 115.4 yards per game on average, nearly double top-ranked Princeton but good enough for 22nd in the country.

The Bulldogs’ pass defense is solid as well — 26th in Team Passing Efficiency Defense, a composite stat that takes into account a number of passing-related metrics. This is mostly due to the frequency with which opponents throw the ball against Yale; although the team ranks just 53rd best in the nation at preventing passing yards, it is very efficient when teams do take to the air, allowing the 24th fewest yards per completion, considerably better than the second-best Ivy League team, the Crimson. The Bulldogs do struggle at taking the ball away, though, as they’ve recorded just five interceptions so far this season. Their secondary will be led by defensive back Wande Owens, who’s had a remarkable season, with 58 tackles – ninth most in the Ivy League. The Cooksville, Md. native will likely be eager for redemption, having allowed Wimberly to sneak by him on last year’s game-winning catch.

“They don’t get beat deep a lot,” Dean explained. “That’s going to be a really big part of our game plan is just figuring out how we can get our shots in. Our offense operates off of explosive plays.”

If the pride of the Yale defense is preventing deep balls, its offense is grounded in conservatism. The Bulldogs run the ball frequently, racking up 226.5 yards per game on the ground, 61 yards more than their nearest Ivy League rival, Harvard, and good for ninth-best in the FCS. Their offense is built on the unique skill set of the southpaw signal-caller, who is not only the team’s leading passer – with 1,516 yards, 13 touchdowns, and 10 picks – but its top rusher as well – 115 carries for 682 yards and six scores on the ground. In fact, Grooms is so proficient on the ground that he is actually the conference’s second-leading rusher, behind only Borguet. Yale also rosters the Ivy League’s third-leading back, junior Tre Peterson, who has complemented Grooms with 650 yards and five touchdowns. The Crimson will aim to keep the Bulldogs throwing on Saturday, as their leading receiver, David Pantelis, ranks just 120th nationally with 497 yards.

“With their run-heavy offense, you have to effectively prevent them from dominating the game,” said senior defensive lineman and captain Truman Jones. “Like, if they just run the ball down the field, have ten-plus-play drives, that chews up clock, it takes up momentum, and it also keeps the ball out of our offense’s hands, so prevents us from scoring.” 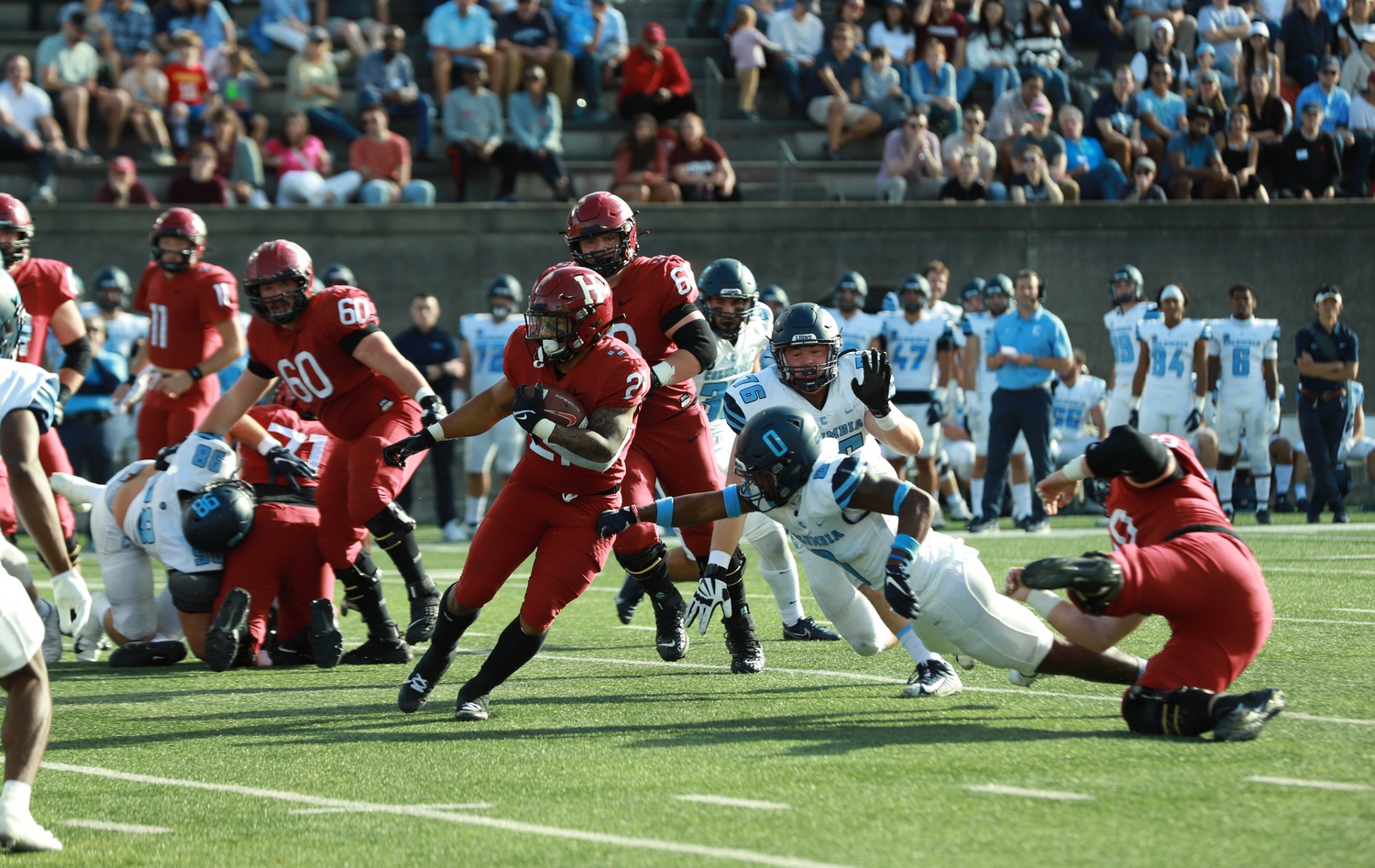 The Crimson fell to Columbia 20-21 on Nov. 5, 2022. Columbia is currently tied for fifth in the Ivy League rankings alongside Cornell. By Angela Dela Cruz

The Harvard defensive line should be well-prepared to stop the run on Saturday, as although this year’s unit has been a little bit worse than the 2021 version, which allowed the fewest rushing yards of any team in the FCS, the defense has still been unkind to opposing backs. After holding Penn to just nine yards on 15 carries last week, it has yielded just 92.1 yards per game on the ground, good for the seventh-best rate in the country. Led by the consistent brilliance of junior defensive tackle Thor Griffith, who leads the team with five sacks, and the veteran savvy of senior linebacker Jack McGowan, defensive coordinator Scott Larkee ’99’s unit has been characteristically good against the run. It is also sneakily solid against the pass, ranking second in the Ivy League in Team Passing Efficiency Defense.

“Those are all guys who have had playing experience, but know they’re really stepping into a spotlight role and have been able to really hold down that second level of great communication,” said Jones of the linebacker corps, which includes McGowan and a few less experienced players like seniors Jake Brown and Solomon Egbe, as well as junior Matt Hudson. “They’re bridging the gap between playing run defense and playing pass defense and they’re doing all of this at a very high level.”

On Saturday, the Yale offense will have to take advantage of third downs, when the Crimson has struggled mightily this season. Harvard has conceded a fresh set of downs on 41.8 percent of tries, good for only 71st in the country.

“We play efficient defense on first and second downs and get into third-and-long situations,” said Jones of areas for improvement. “But a lot of times, it ends up in a conversion of some sort, whether that’s a longer run or a medium-length pass, so just being able to hold teams to three-and-outs, keep our defense off the field, and continue to get our offense the ball to get more possessions.”

If the Crimson can keep the ball in the offense’s hands, Harvard Stadium will be rocking on Saturday. With the nearly 30,000-seat colosseum hosting its first Harvard-Yale contest since 2016, tickets sold out quickly. And with the high stakes of an Ivy League championship on the line for both teams, red-clad Harvard fans and blue-shirted Yale supporters will be on the edge of their seats for the entire 60-minute duration.

But for Dean, that isn’t the focus. For the team’s many seniors who have dedicated their time and sacrificed their bodies, including some – like Wimberly – who took a semester off in order to play their final seasons of eligibility, Saturday will mark their last time playing together. The team’s 37 seniors will be celebrated in an on-field ceremony prior to kickoff.

“It’s the last chance that this group of [121] guys are going to be able to play football at the same time,” the quarterback said. “That’s the biggest thing that’s on my mind. It’s the last time I get to play with my friends, my brothers, my roommates. That’s what we’re thinking, I think, as a team, going out there and knowing that we’ve got one last shot at playing with each other and just having some fun.”