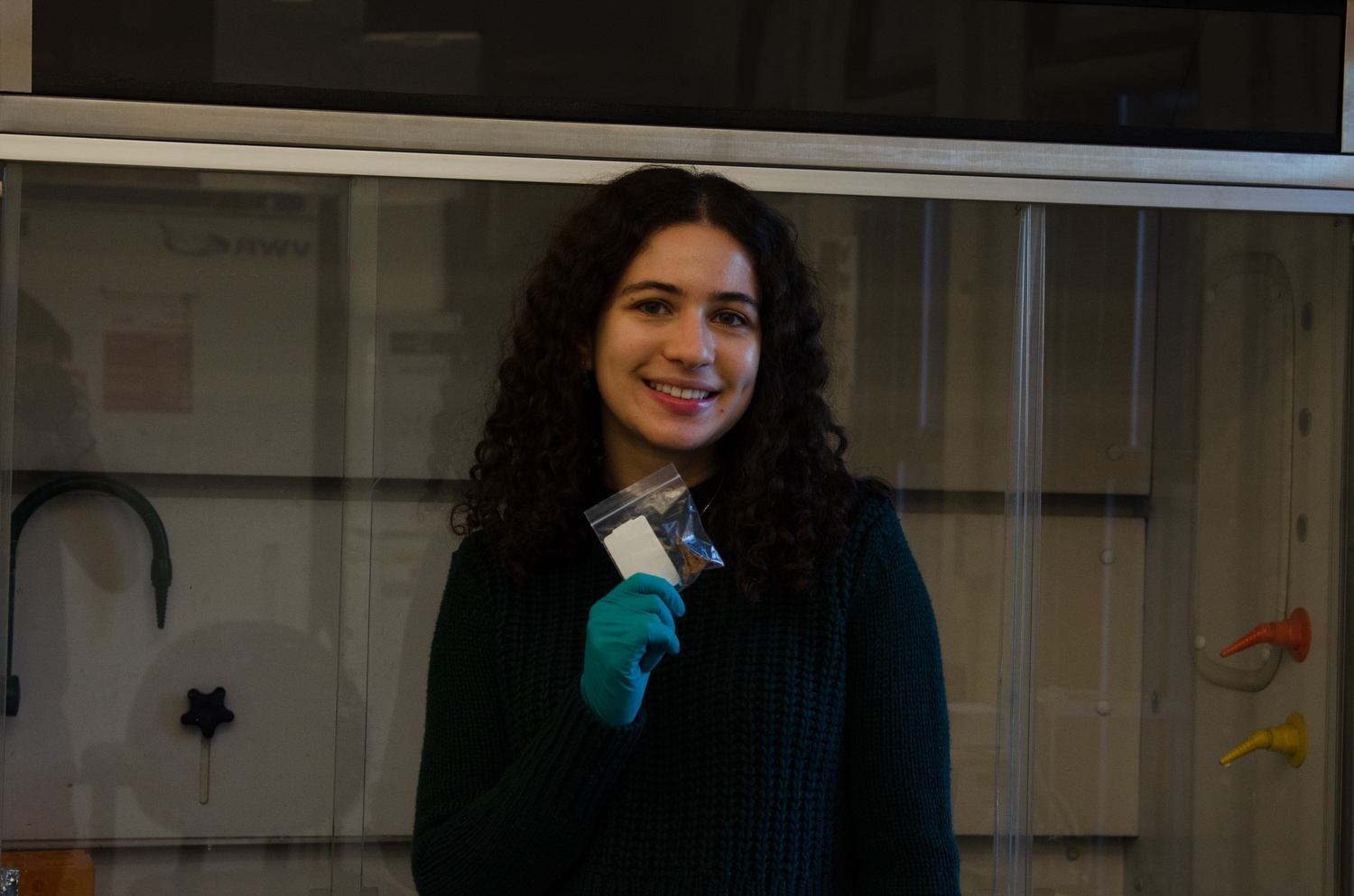 Khachemoune is using chemical analyses to study rabbit and turkey bones from a Mayan site in Honduras to understand how humans changed the diet of animals in the 1890s.
By Akila V. Muthukumar

Nour L. Khachemoune ’23 says her friends fondly call her NBC — the Nour Broadcasting Company — because she seems to “know everything that’s going on.” This curiosity is also the driving force behind her ambitious, interdisciplinary thesis. Khachemoune is using chemical analyses to study rabbit and turkey bones from a Mayan site in Honduras to understand how humans changed the diet of animals in the 1890s.

“Nobody really knows what these bones are, or what we can determine from them,” she explains to me as we walk through the Archeology department, nested on the fifth floor of the Peabody Museum. “Harvard has a long history of collecting things and leaving them in storage and not doing much with them.”

Khachemoune begins her work by studying bone collagen to determine if the fragments actually belong to the species on the museum’s labels. She finds the tactile work great fun — and making novel discoveries about the species of a particular fossil (which is rare for an undergraduate) is just an added bonus.

“We’ve found that the actual species ID is completely different from what the Peabody thought it was,” she says, adding that the museum has been receptive to changing labels when this has happened multiple times.

Then, she analyzes carbon and nitrogen levels in the bones to determine their exact age before using various chemical techniques to tease out the animals’ diet. Based on these diets, researchers can make inferences about how humans interacted with the animals. For example, if a protein-rich diet is found for an animal that is known to primarily eat corn, it is possible that humans were responsible for introducing proteins to the animals through domestication.

Khachemoune loved chemistry all throughout high school and came into college sure that her path forward would involve studying small molecules and reactions in labs. However, taking Gened 1105: “Can We Know Our Past?” made her rethink this decision. Khachemoune says learning from renowned anthropologists Rowan K. Flad and Matthew J. Liebmann, who taught the course, shaped her thinking about interacting with artifacts and analyzing the past.

“At first I was like, ‘this is such a pain, who cares about this,’” Khachemoune recalls. But soon, she recognized lab techniques she already knew being applied to study scientific history. “I started to get more interested in the people and the story of how we got here.”

One of the class’s guest lecturers — Christina Warinner — gave a riveting lecture on scientific archeology. Inspired by this session, Khachemoune went on to take Warinner’s introductory class on archeological science that spring. Later, Warinner became Khachemoune’s thesis advisor, and one of the class’s teaching fellows is now her direct lab supervisor.

But just as Khachemoune had identified these fledgling passions and mentors, the pandemic kicked everyone off campus. She decided to spend the year as a medical assistant, helping mostly older patients.

“I learned so much about the people and how human being a doctor is, and I heard so many people’s different stories from all ages,” she says. Her passion for medical anthropology grew, and she realized that developing treatments through chemistry alone would not be satisfying. 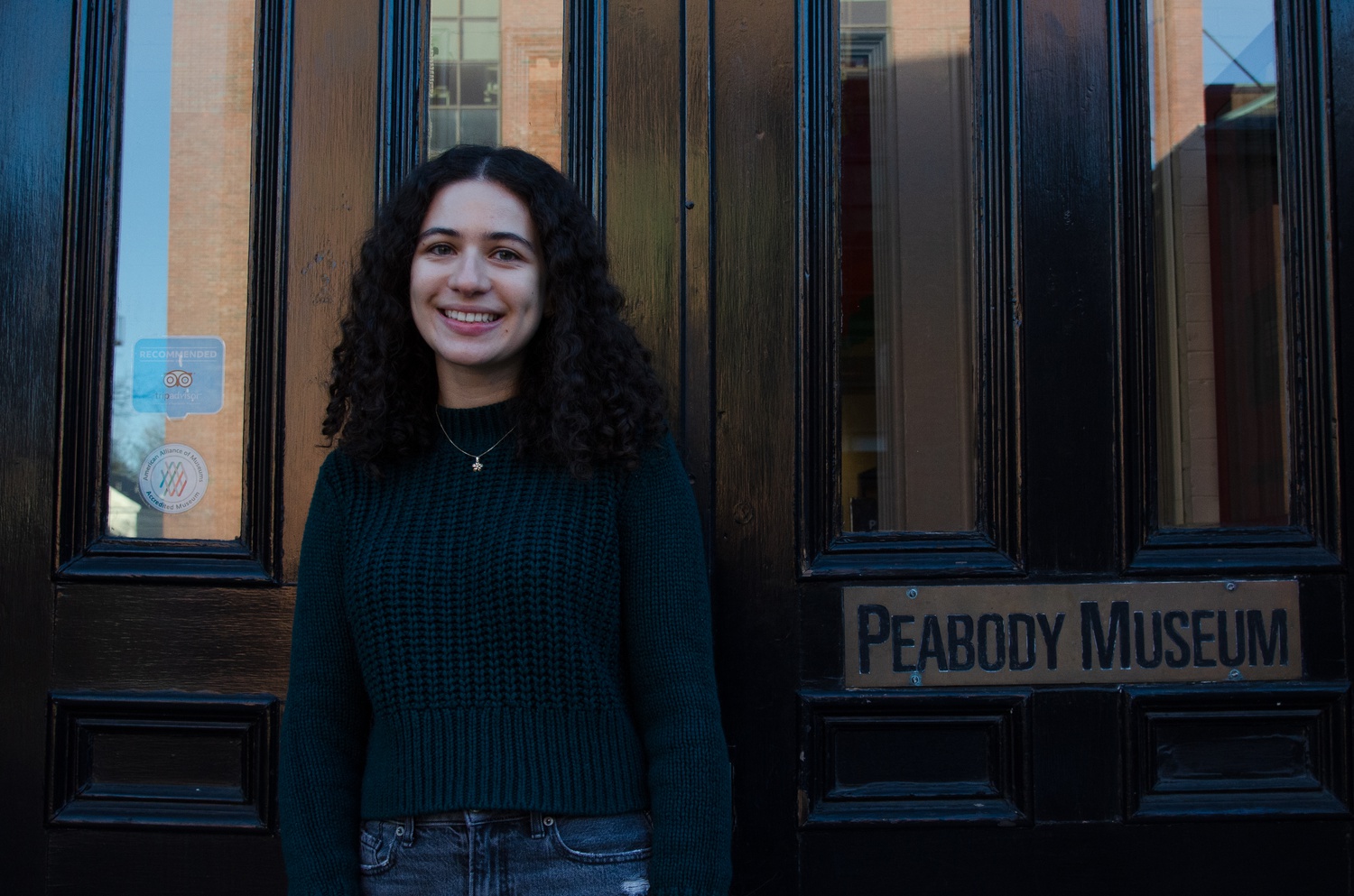 “[Warinner] was hired to be a scientific archaeologist here at Harvard, because that’s the direction the field is going,” Khachemoune says. “She’s just such an inspiration for combining fields and in being a strong woman in science.”

Scientific archeology is a burgeoning field that allows researchers to tackle big questions about how societies form and fall. For example, understanding animal diet and domestication can be a portal to understanding the health of a society. Khachemoune says we don’t know a lot about Mayan civilizations, from their language to how they traded with other cultures. Her own thesis could help researchers understand how food sources connect to their civilizations’ development and demise.

In her lab, Khachemoune shows me little bags of animal bone, some with bite marks or small jagged cuts across their edges. She says the research feels “really real” when she holds the fragments.

“Through this tactile process, I’m seeing these animals and these people’s stories in the past,” she says, walking around a slightly cluttered array of lab equipment and storage bins. “It’s sort of like eavesdropping, investigating, observing.”

Khachemoune’s motivation to work on a thesis for years, even when progress is slow, comes from loving the science, loving the lab work, and working with her hands. She encourages future thesis writers to establish their own workflow — even if it means defying a deadline set by an adviser or doing some parts of the project out of order.

She also leans on the broader archeology community — she says hierarchies between graduate and undergraduate students dissipate in the genuinely collegial department. Best of all, she says, her mentors ensure that work from students like her who “aren’t even going to be archaeologists” is taken as seriously as that of students who want to go into the field. Even though she hopes to go to medical school, Khachemoune says she wants to use scientific archeology to try to “connect the smaller details of chemistry to the overall human journey.”