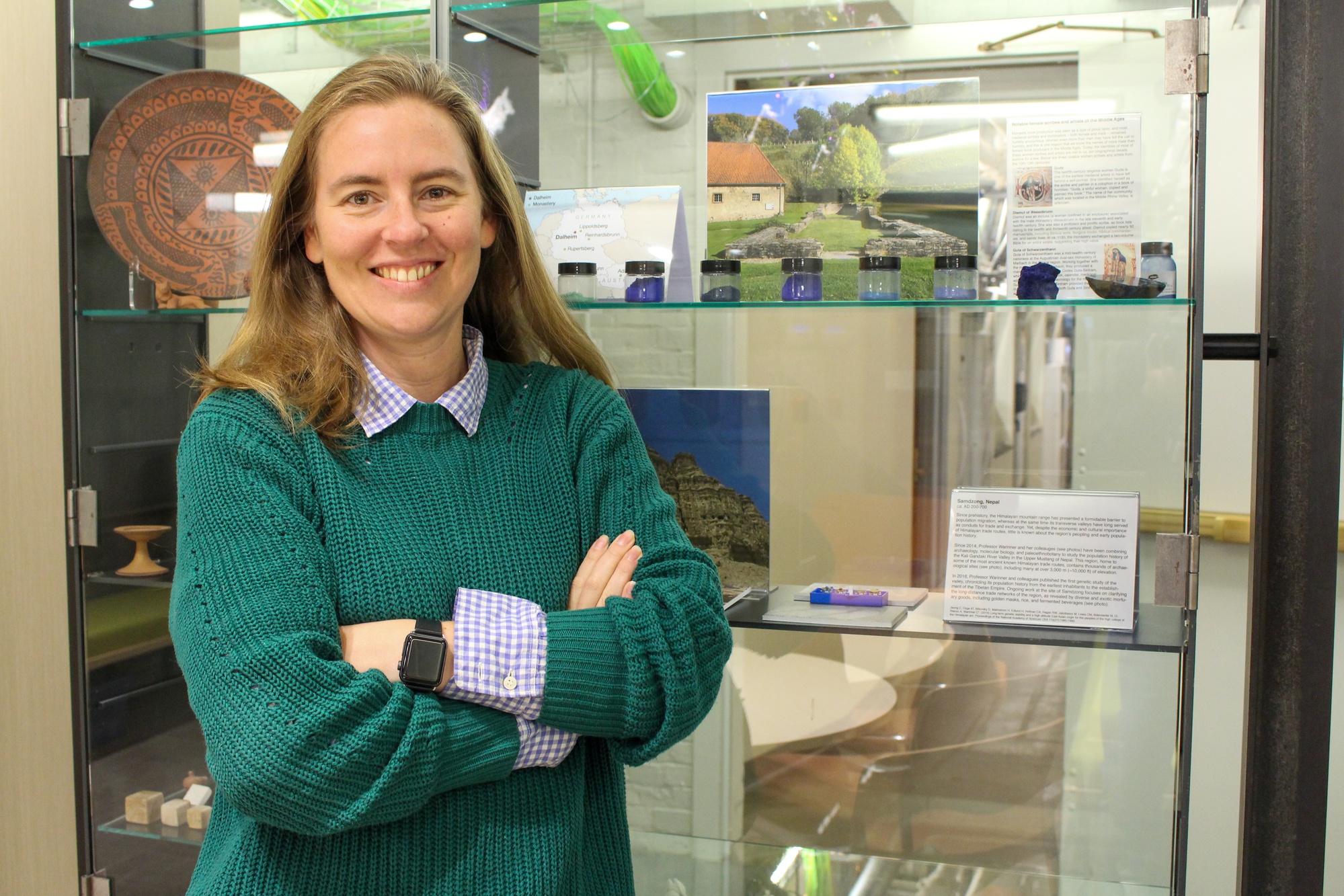 Christina Warriner, an assistant professor of anthropology at Harvard College, researches in biomolecular archaeology with an emphasis on the evolution of the microbiome.
Advertisement
Advertisement

Food for Thought with Christina Warinner

A row of colorful, plastic-wrapped toothbrushes lines a shelf in Christina Warinner’s office. Their presence is a bit ironic, as Warinner’s research seems to put her at odds with dental hygiene: some of her most important discoveries come from residue left on the teeth of ancient humans.
By Claire B. Fridkin and Sophia S. Liang

A row of colorful, plastic-wrapped toothbrushes –– like the ones dentists hand out after an appointment –– lines a shelf in Christina Warinner’s office at the Harvard Peabody Museum of Archaeology and Ethnology. Their presence is a bit ironic, as Warinner’s research seems to put her at odds with dental hygiene: some of her most important discoveries come from residue left on the teeth of ancient humans.

As an anthropologist, Warinner studies the relationship between humans, their food, and their microbiomes. By examining traces of food and microorganisms left behind on dental tartar, paleofeces, and ancient ceramics, she is able to uncover lost details of human history that can inform modern humans’ diets and health. Warinner is part microbiologist, part paleogeneticist, part human evolutionary scientist.

“Food is something that unites and connects people all over the world. It’s something we all do every day, and it’s deeply embedded both in culture and biology,” Warinner says. “And people have solved the problem of food in vastly different ways around the world.”

Her interest in food and molecular anthropology has taken her across the globe to countries like Mexico, Nepal, and Mongolia. Recently, she has been working on the Eastern Steppe in Mongolia to study the origins and proliferation of dairy technology. She views dairying as a field “where culture and biology meet,” and she is fascinated by the ways humans have manipulated microbial cultures to ferment and transform animal milk. (One of her favorite foods is aaruul, Mongolian dried milk curds.)

When most people think about the rise of the Mongolian Empire, they think of Ghenghis Khan. But Warinner attributes some of the Empire’s success to a more humble source. “We think we’ve actually captured the introduction of dairy technology during the Bronze Age in Mongolia, which subsequently supported the rise of empire there,” she says. Using the remnants of milk proteins on teeth, she uncovered how herding and dairy preservation afforded Mongolian societies the nomadic freedom to spread and eventually conquer their neighbors. 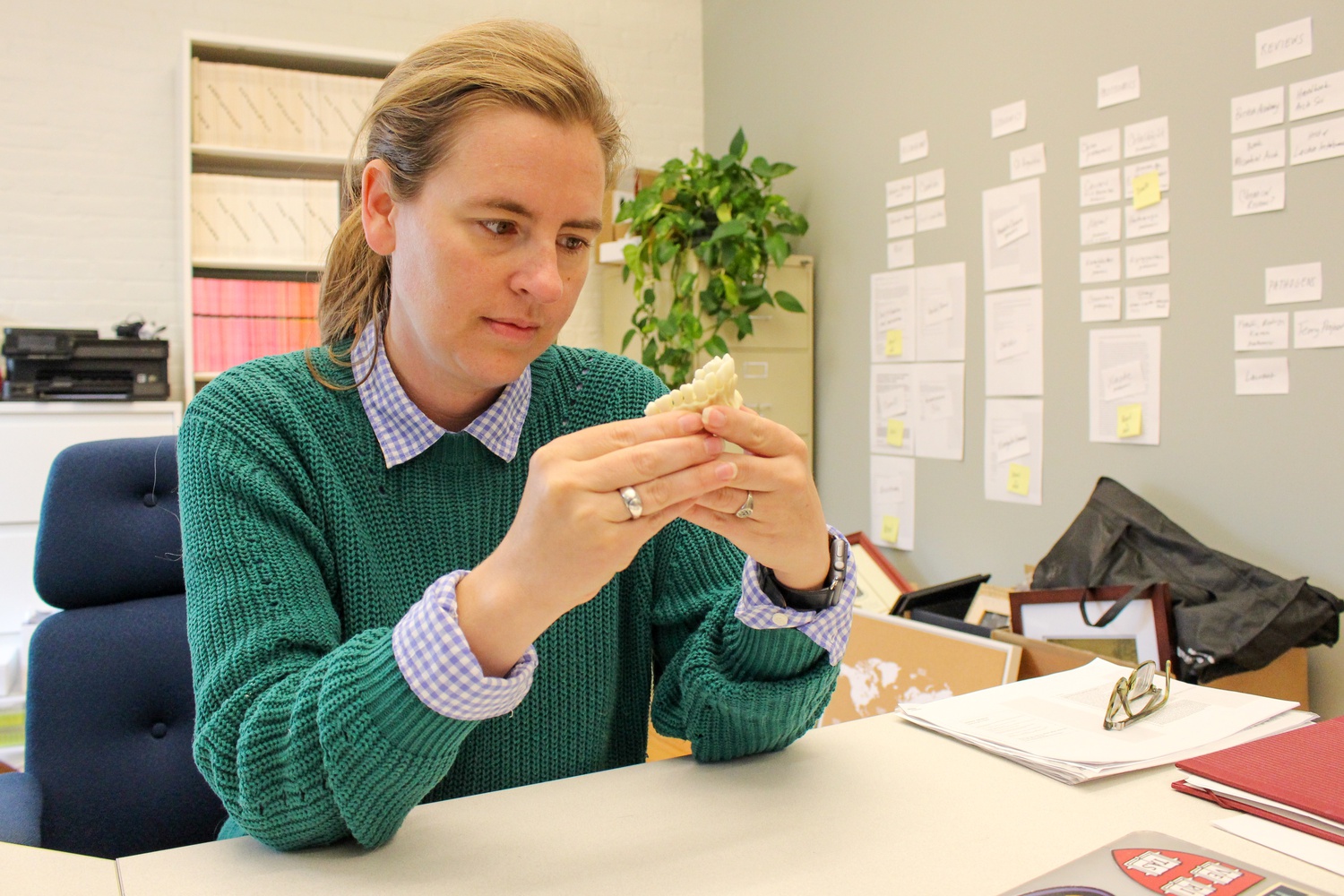 Warinner was born in a suburb of Kansas City, but her academic interests have always been all over the map. Growing up, she loved subjects spanning the humanities and the sciences, from chemistry to history to microbiology to Latin, and she struggled to pick an academic focus. “It wasn't until I got to college that I learned about the field of anthropology and realized that there was a discipline in which all of these different interests could reside,” she says.

Warinner hopes to use her knowledge of ancient diets and health to demystify contemporary nutritional science. This fall, in her new course Anthropology 1255: “Human Diet: From Neanderthals to the Future of Food,” Warinner aims to give students “a perspective on the really long history of food … and the tools and the information they need to evaluate some of the claims that are happening.” Her biggest piece of advice for eating healthy in the modern world is to eat a variety of fresh food from the sections along the walls of the grocery store — the produce, meat, dairy, and bakery sections — while avoiding the processed corn, wheat, and soy products from the center aisles.

Warinner devotes herself to outreach and education beyond the academic sphere. “I feel like we have, as academics, a real responsibility to educate the public,” she says. “And I feel like as archeologists, we’re in a position to do it in a way that's more accessible than other fields.” She has published 75 percent of her articles open-access, given two TED talks, and been featured in several videos and online lectures.

Her favorite outreach project was editing a children’s coloring book called “Adventures in Archeological Science.” The book has been translated into more than 30 languages — including Nepali; Tibetan; Brazilian Portuguese; and Nahuatl, the Aztec language that is still spoken by almost two million people in Mexico. Warinner believes in making her outreach materials accessible in the countries she works in and in smaller communities that speak Indigenous languages. “This could be an opportunity for us to explain what we do and why it’s important, and maybe even encourage children in these places to get interested in archaeology and become archeologists themselves,” she says.

In her upcoming work, Warinner hopes to apply new biomedical technologies to the field of archeology, use modern breakthroughs to better understand the past, and incorporate both of these strategies into her curriculum.

“We’re in a period where we can start to ask questions we never even thought were imaginable before,” she says.