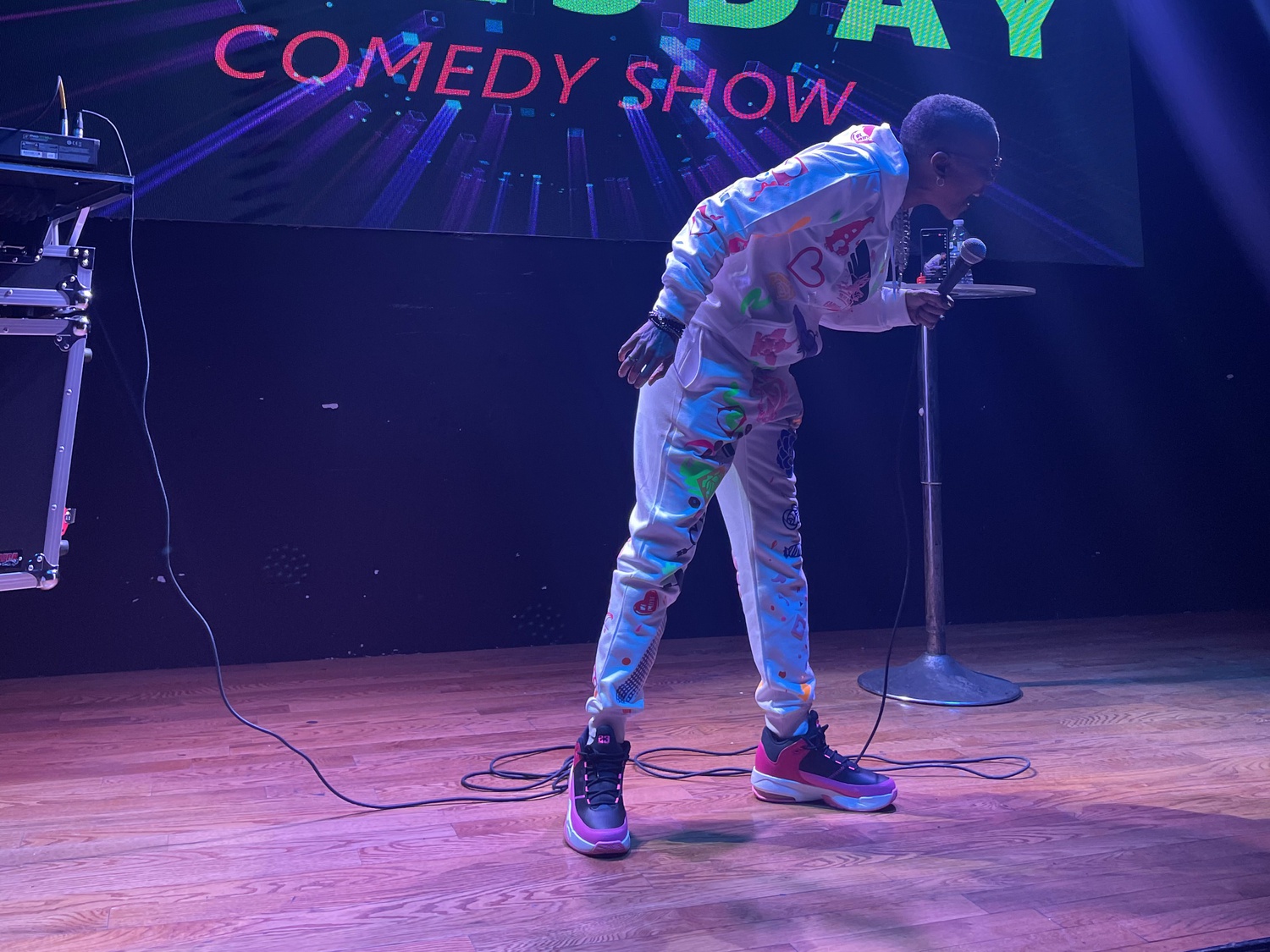 Social isolation caused by the pandemic has made events like Tickle Me Tuesdays, a weekly all-Black comedy show, all the more essential —  they create a space for Black folk to be happy and celebrate one another.
By Eden A. Getahun

As I walk into the room, I feel the bass pounding in my chest. Each step I take closer to the stage makes the noise even louder. The overhead red lighting sets the mood, hip-hop blaring as Black folk seat themselves in the audience, ready for the night to begin. Welcome to Macumba Latina, a club in Mattapan, and the home of Tickle Me Tuesday, a weekly all-Black comedy night hosted by Wendell L. Delk and his organization I Am My Own Hero.

Delk starts the event with the intention of putting Mattapan on the map in a positive way. Having grown up just a street over from where Tickle Me Tuesday is hosted, he wants to dismantle negative stereotypes about Mattapan by bringing together and uplifting the community that he was raised in.

I first learned about I Am My Own Hero at CambridgeSide Galleria’s Black History Month Pop-up, where I spoke to Lenika A. Gousby about the importance of highlighting Black joy through these weekly comedy nights. She describes the extreme gentrification in her area, “big development companies coming in and building up condos, forcing families to be displaced or move out.” Gousby added that the social isolation caused by the pandemic makes events like Tickle Me Tuesdays all the more essential — they create a space for Black folk to be happy and celebrate one another. 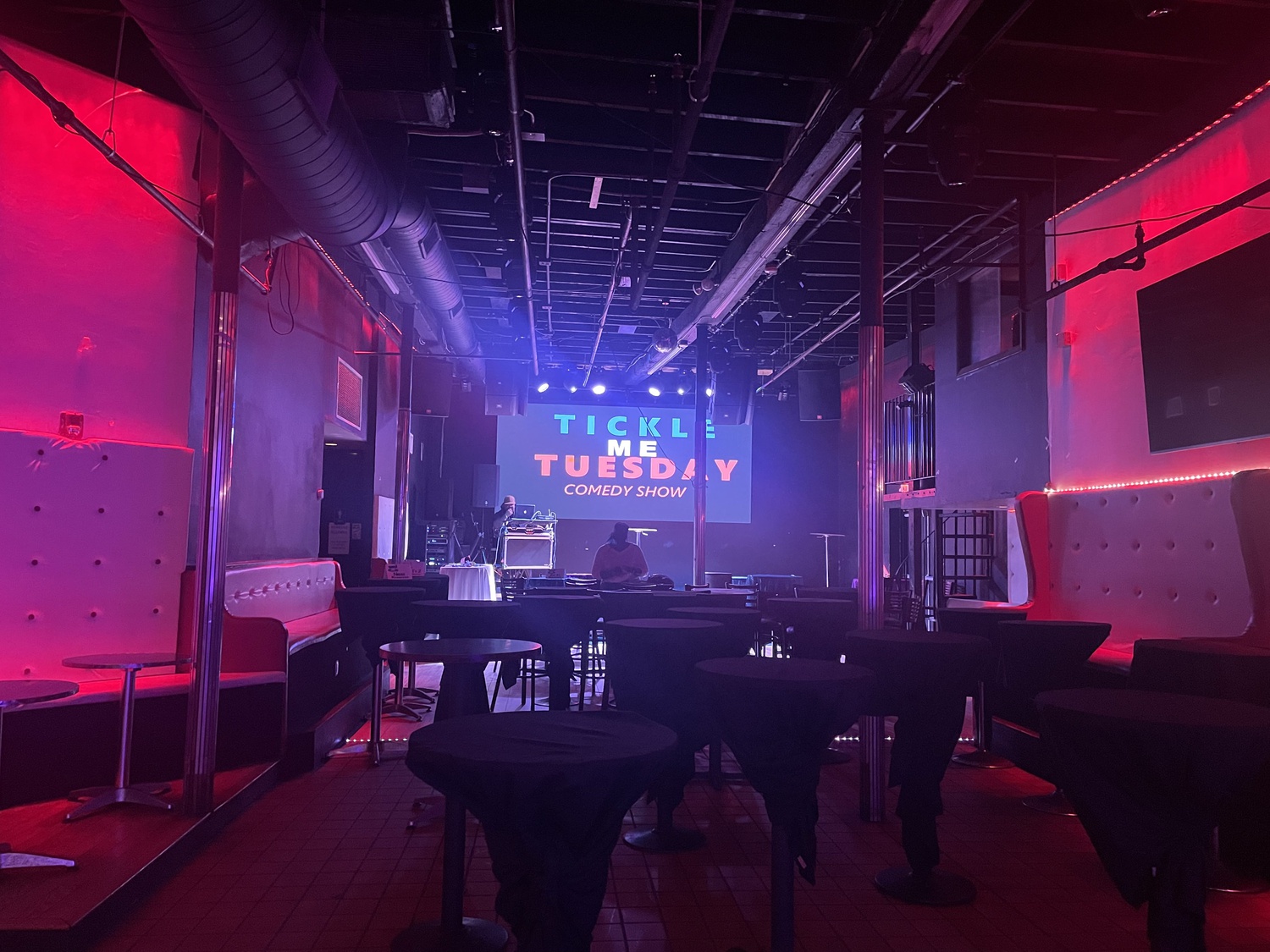 The stage is set for Tickle Me Tuesday, a weekly all-Black comedy show. By Eden A. Getahun

Events like Tickle Me Tuesday, Gousby explains, show that members in the community “are here to support and uplift each other, and that not everything that goes on in our communities is negative.”

A’Plus Hollywood, one of the comedians who performed at the show, agrees. She speaks about the healing role of comedy, particularly within the Black community. “Laughter is needed,” she says. “There's so many lives that have been taken from senseless killing. To keep going to the funerals and continuing to see ‘RIP’ everywhere – at some point, you have to make light of it.”

For the Black entertainers I spoke to, comedy is more than a performance. It is more than just standing up in front of an audience and reciting memorized jokes; it’s an interactive process of healing and community building. Sitting in the front row for the two-and-a-half-hour long show, I got a firsthand taste of a wide range of comedians. Some told raunchy stories, while others danced and encouraged the audience to move in their seats.

I was even the butt of a few jokes — the comedians were quick to call me “Ms. Harvard” throughout the show, telling me to “Blink twice if I needed any help.” I was a willing participant, and these comments drew me into the event, helping me feel like I was a part of the community.

Cookie H. Hull, a comedian of 16 years and writer for stand-up comic and actor Kat Williams, explains, “[Comedians] have something to say that makes you think. And yes, to make you laugh and change your mood.”

Hull says she prefers smaller, more intimate shows like Tickle Me Tuesdays, rather than performing in front of a sea of nameless faces, because they help people see the lessons in her comedy. She adds, “Comedy has messages, and comedians are the messenger.”

— Magazine writer Eden A. Getahun can be reached at eden.getahun@thecrimson.com