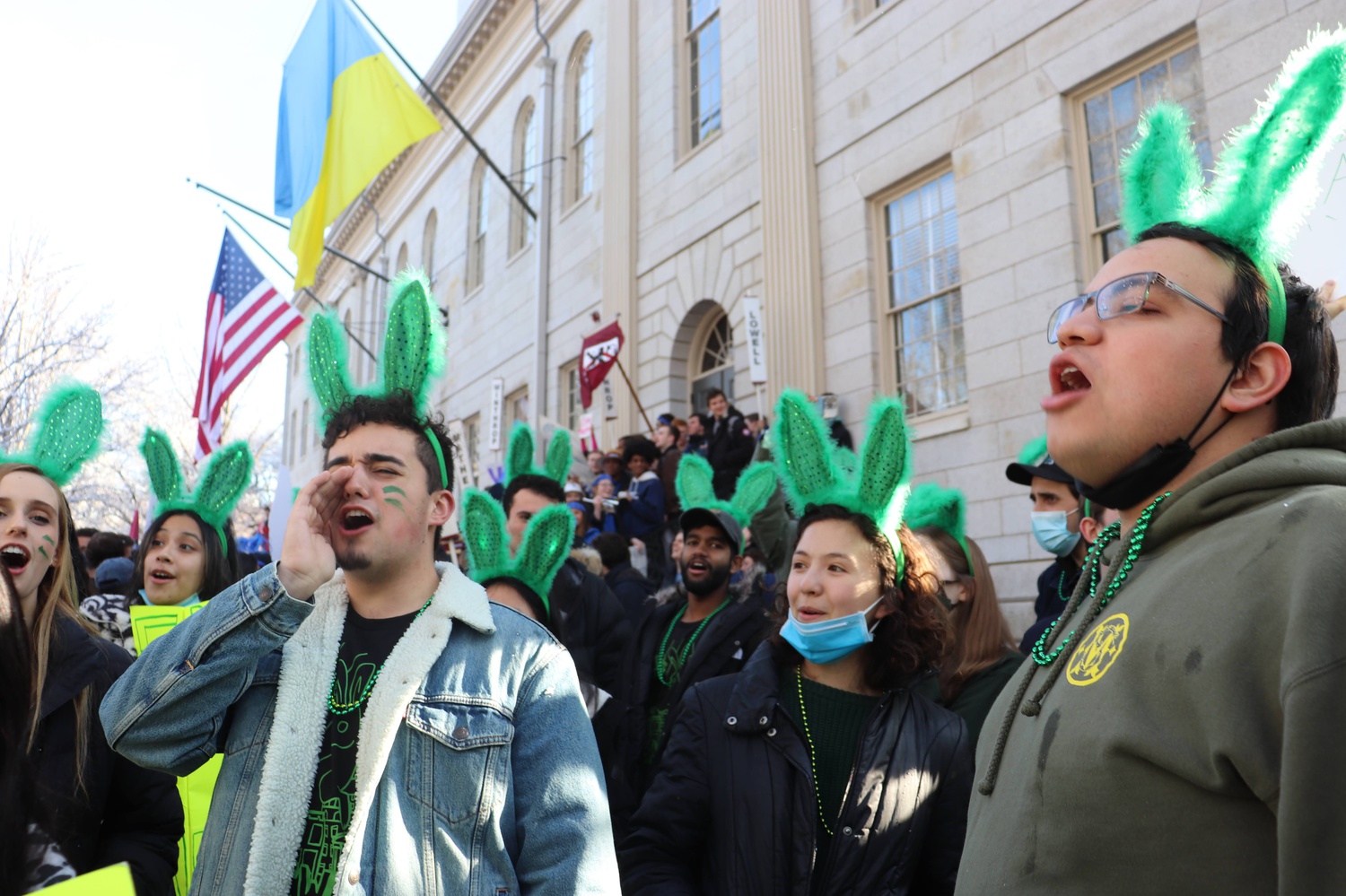 No more Zoom reveals, no more virtual welcomes. This Housing Day, for the first time in two years, Harvard freshmen learned about their future homes in riotous dorm-storm fashion.

On the second anniversary of the day Harvard sent students packing due to the Covid-19 outbreak, upperclassmen decked in house gear hollered chants, waved posters, and stormed freshman dorms. Housing Day is an annual tradition during which freshmen are sorted into one of Harvard’s 12 upperclassman houses or the Dudley Co-Op in groups of up to eight students, called blocking groups.

The Dean of Students Office had previously announced a pandemic-era modified version of the tradition, in which upperclassmen storm freshman hallways in groups of three for up to five minutes. Still, many students took to pre-pandemic ways, disregarding the restrictions and mobbing the freshman dorms en masse sans masks.

“I thought it’d be a little underwhelming, but it was actually really fun,” said Jennifer Xiong ’25, who was placed in Lowell House.

In the week leading up to Housing Day, House Committees released widely-viewed music videos showing off house amenities and dissing the other houses. On Wednesday night, some freshmen took part in River Run, a forbidden ritual in which students take shots of alcohol at each of the nine river houses in an ill-fated attempt to avoid being assigned to live in the remote Radcliffe Quadrangle.

Throughout the day, freshmen — even those who were “quadded” — expressed excitement about their new homes, donning house merch, sharing pictures on social media, and attending house events. 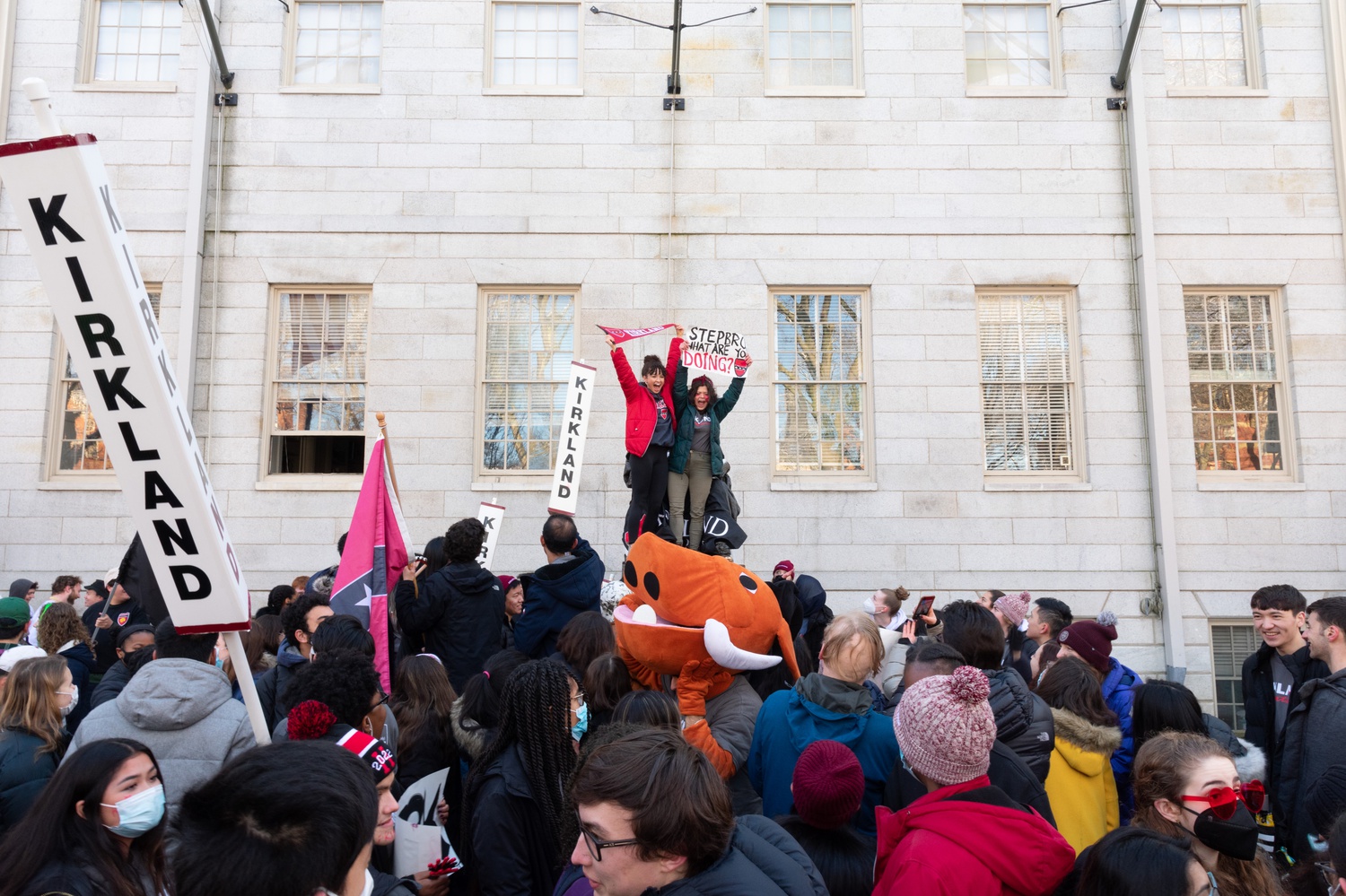 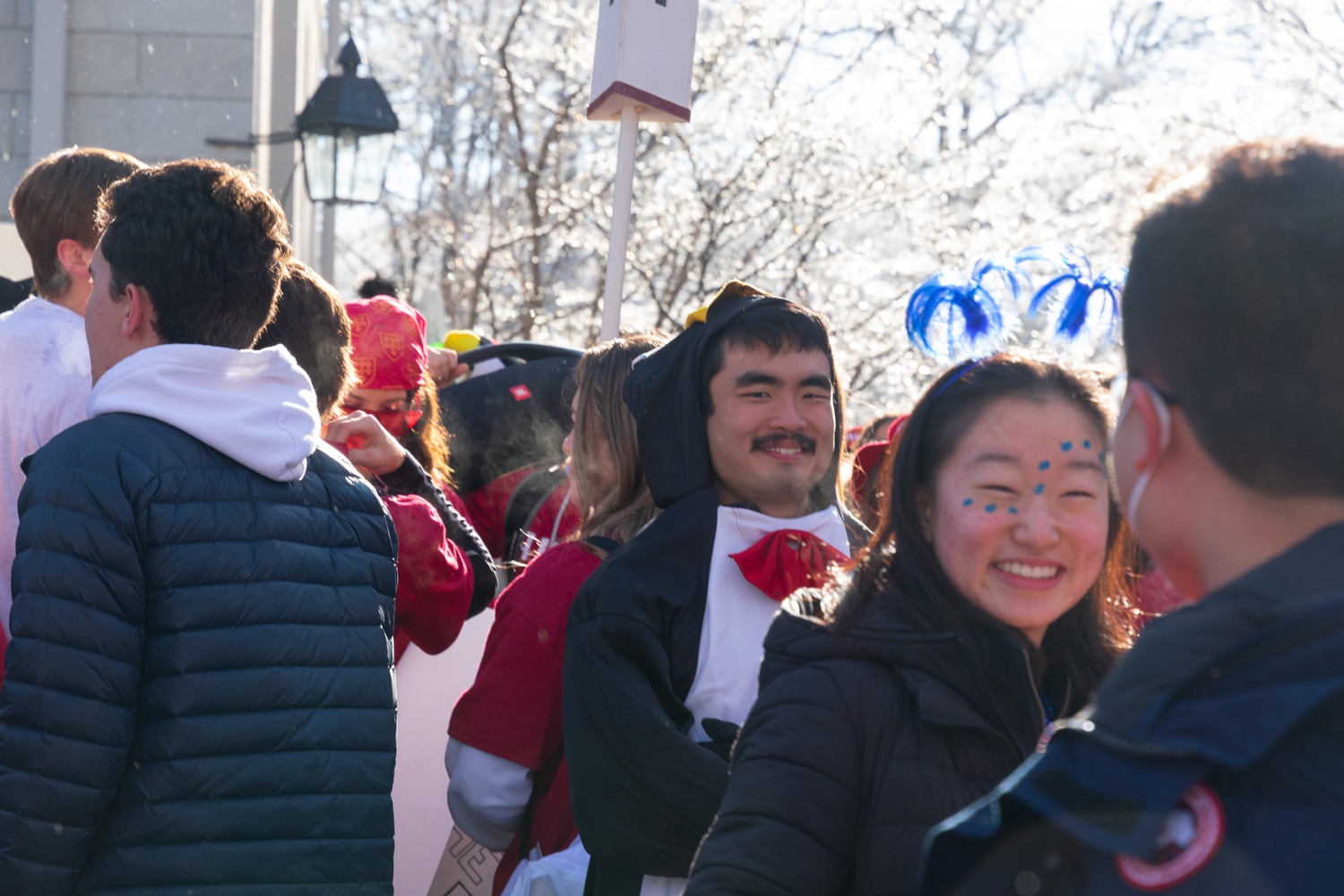 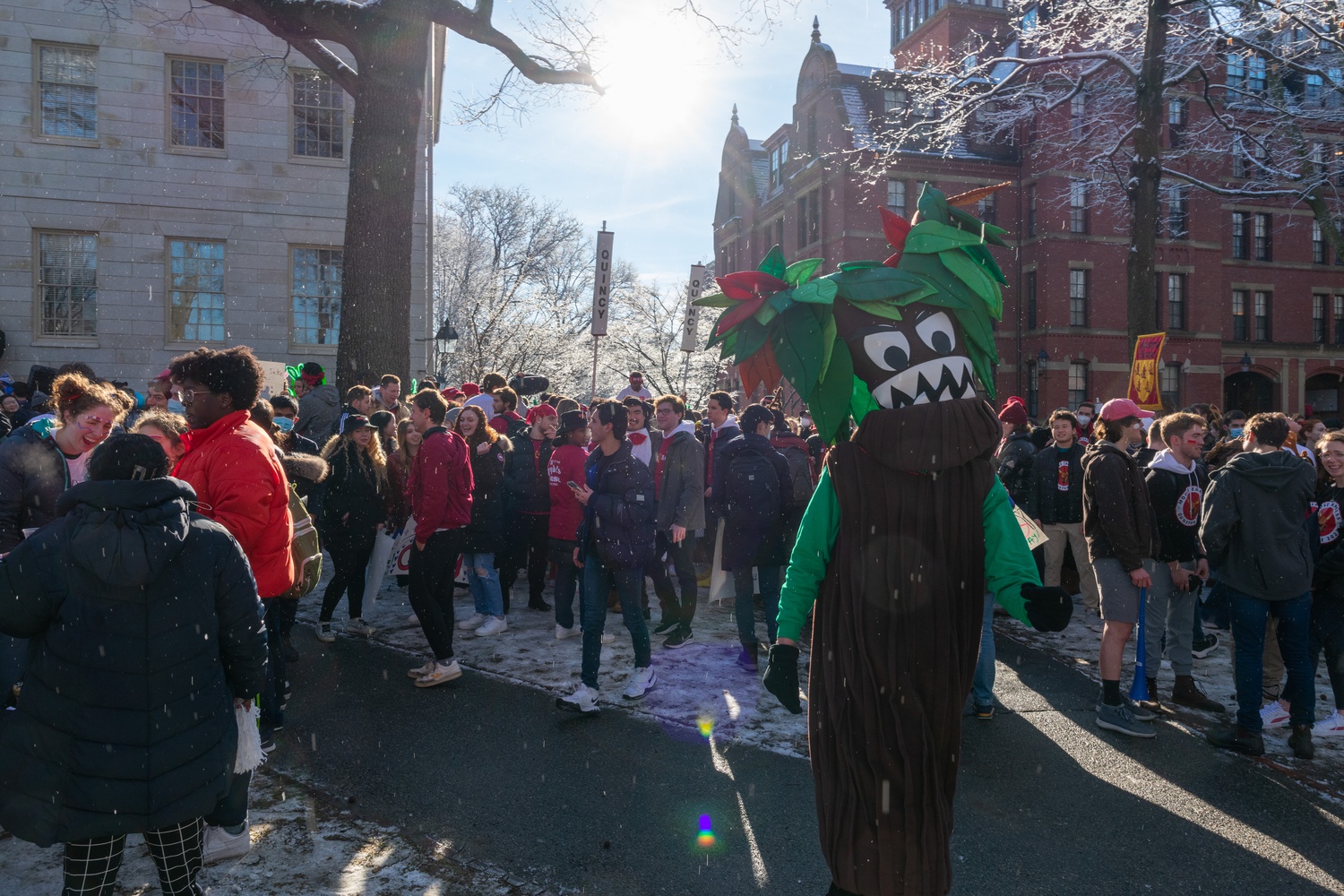 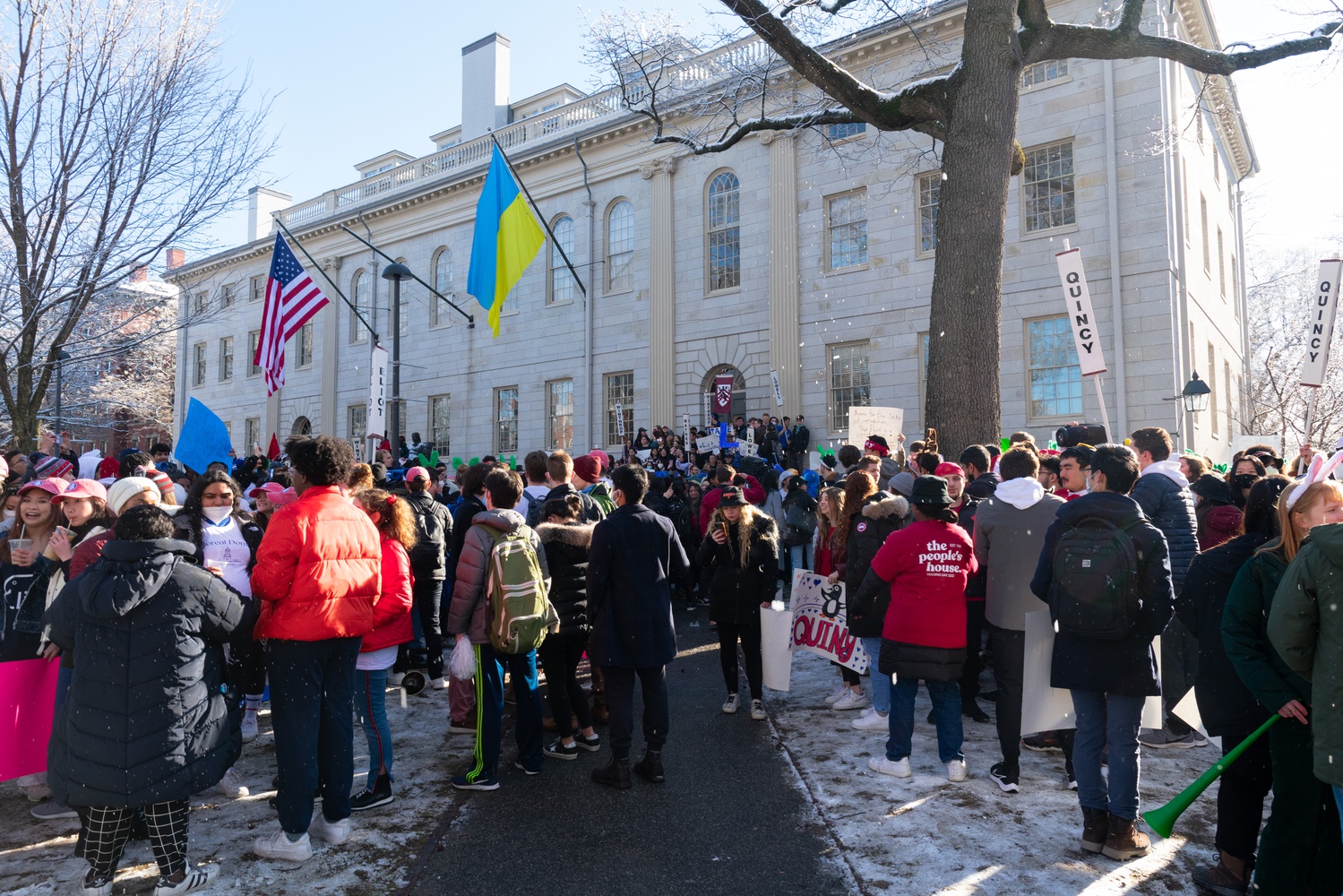 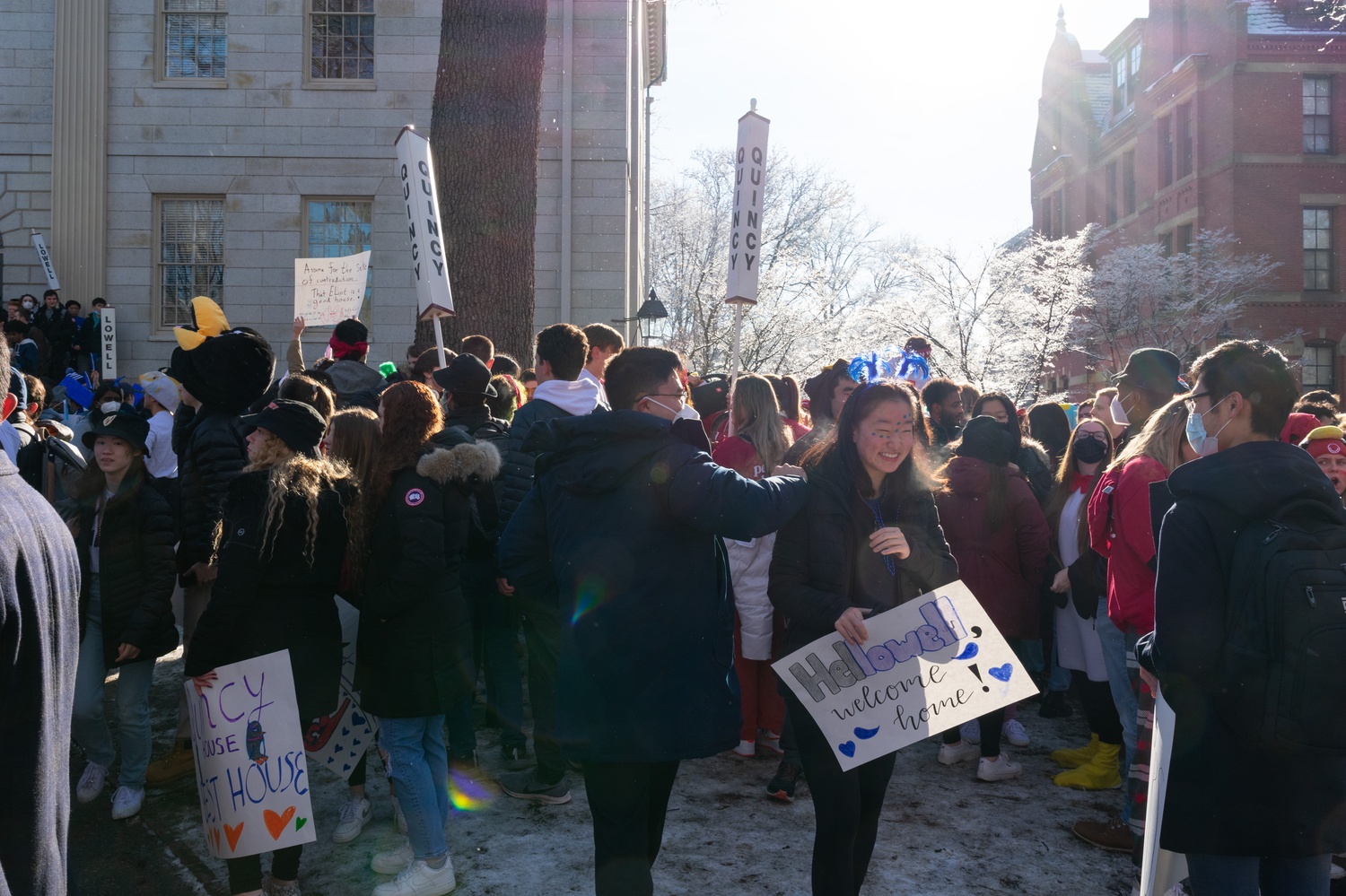 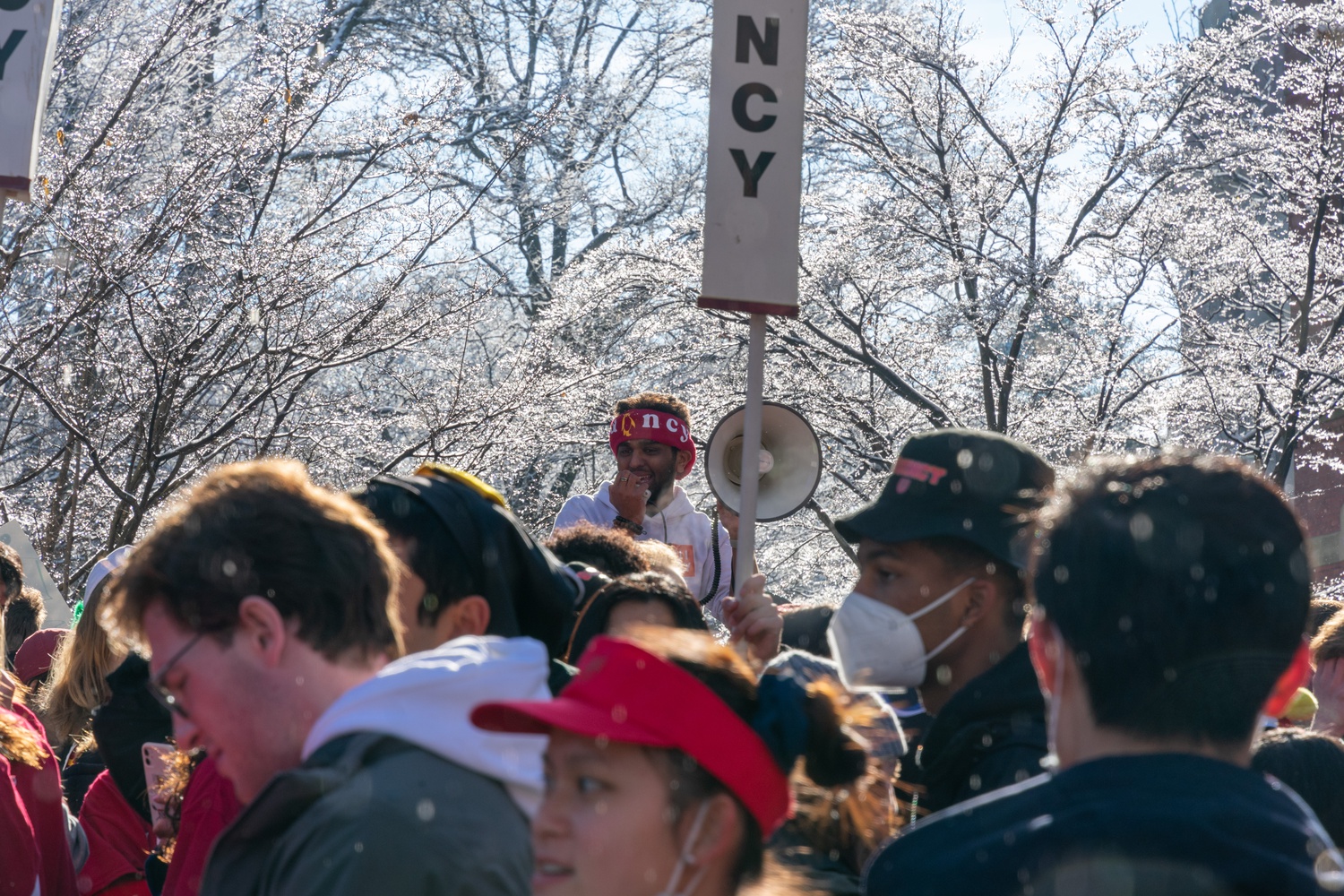 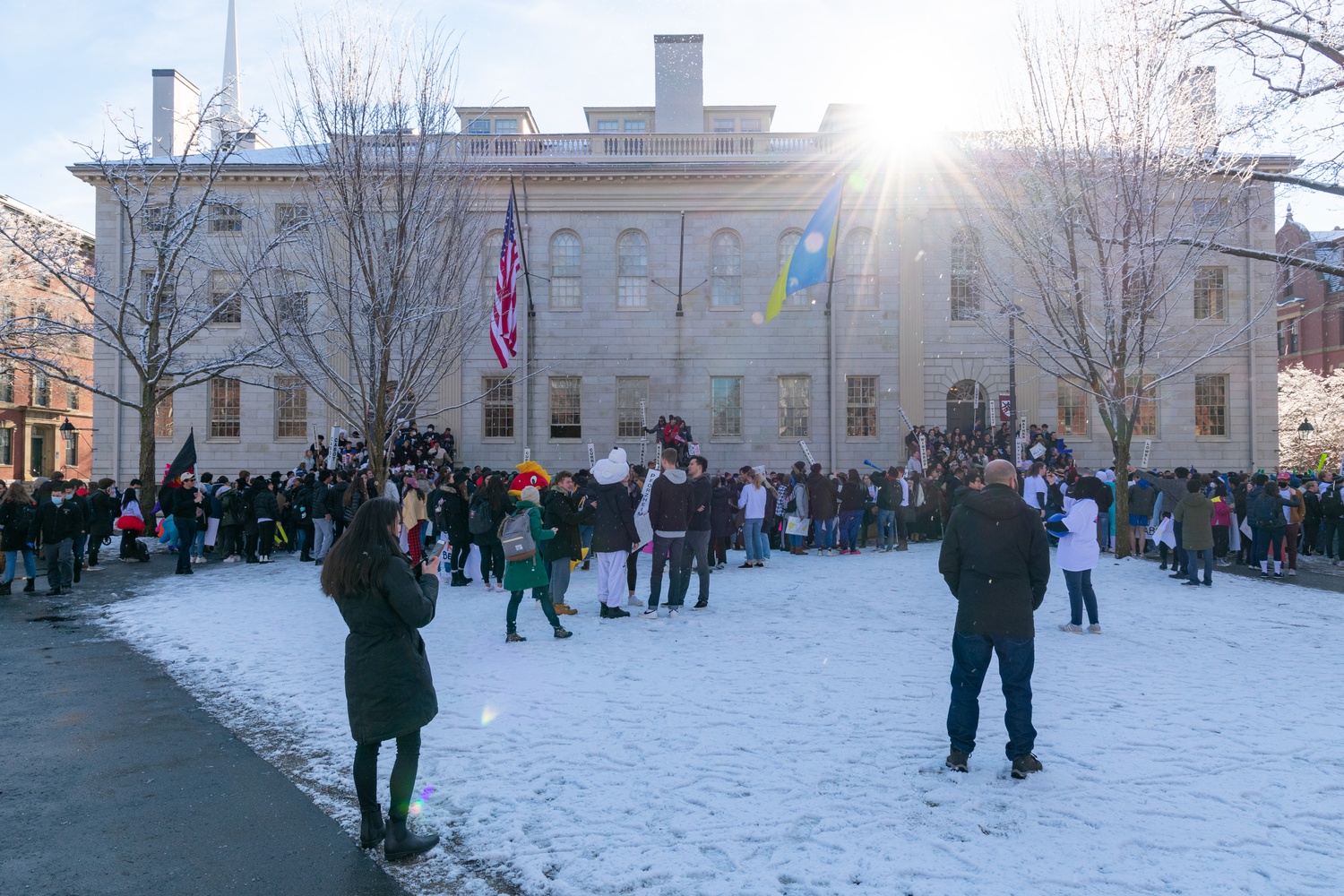 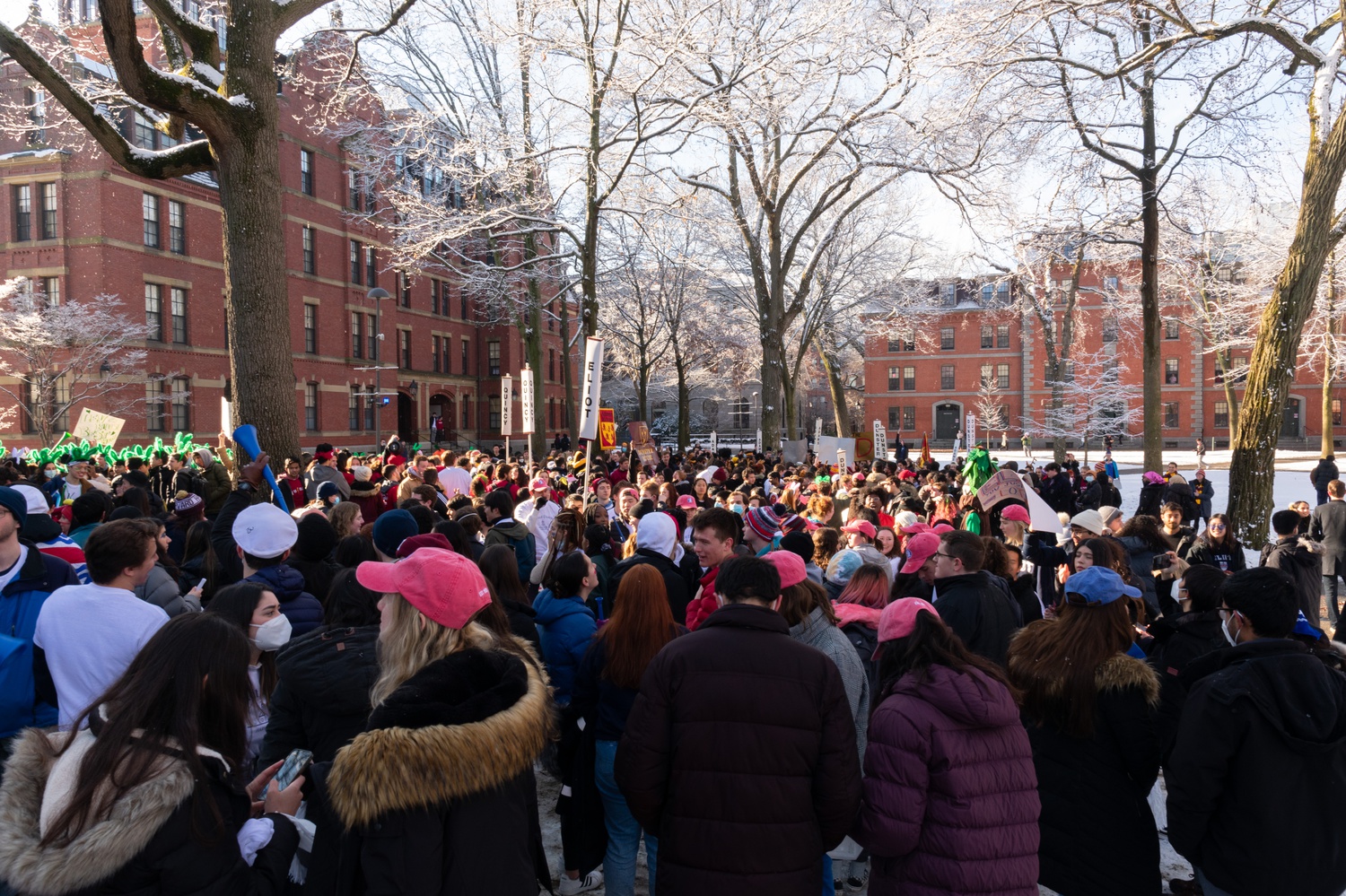 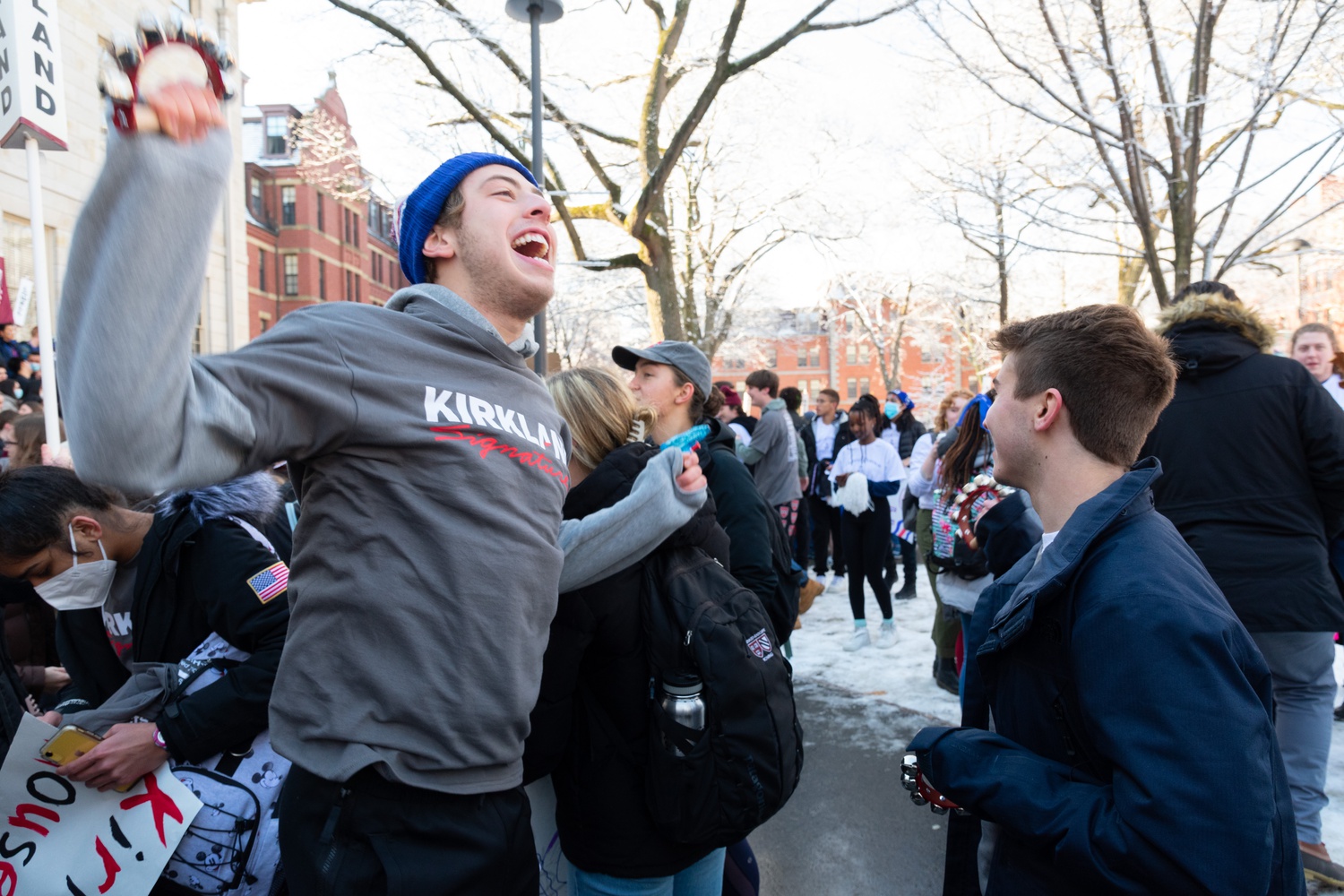 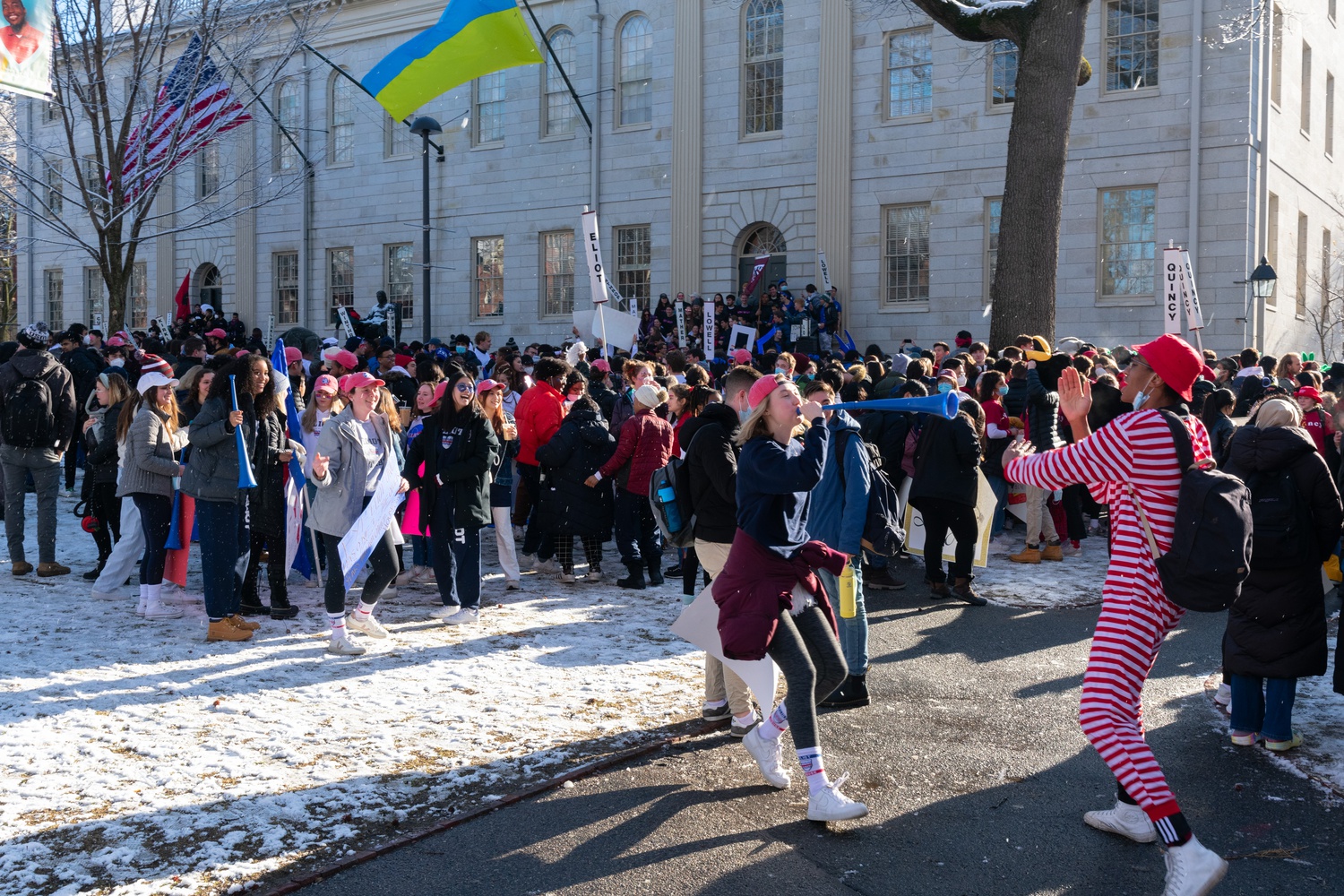 Jeffrey Fang ’25, who displayed his house pride with a new Currier House baseball cap and shirt, said he had hoped to get a house in the Quad, though some of his blockmates were less pleased.

“There’s a higher chance of getting a single, also better food. And just peace and quiet,” Fang said.

Some posters for the Quad Houses and Mather House bore the phrase “more sex,” in reference to their abundance of single dorm rooms.

Early Thursday morning, students from Kirkland House arrived first to University Hall, where they draped a house flag over the John Harvard statue and hoisted another onto the building.

When asked how he felt about his new house, Mahdi A. Hamad ’25 yelled “Quincy! Q house! Let’s go!” and said it was his second choice behind only Adams House.

Savannah S. Cooksey ’25 said Housing Day and the dorm storm were “pretty fun,” even though she was “iffy at first” about getting assigned to Currier.

Taylor Fang ’25 said she was concerned she might have a higher chance of getting “quadded” due to the unusually large size of the Class of 2025 but felt “really lucky” to be placed in Adams. 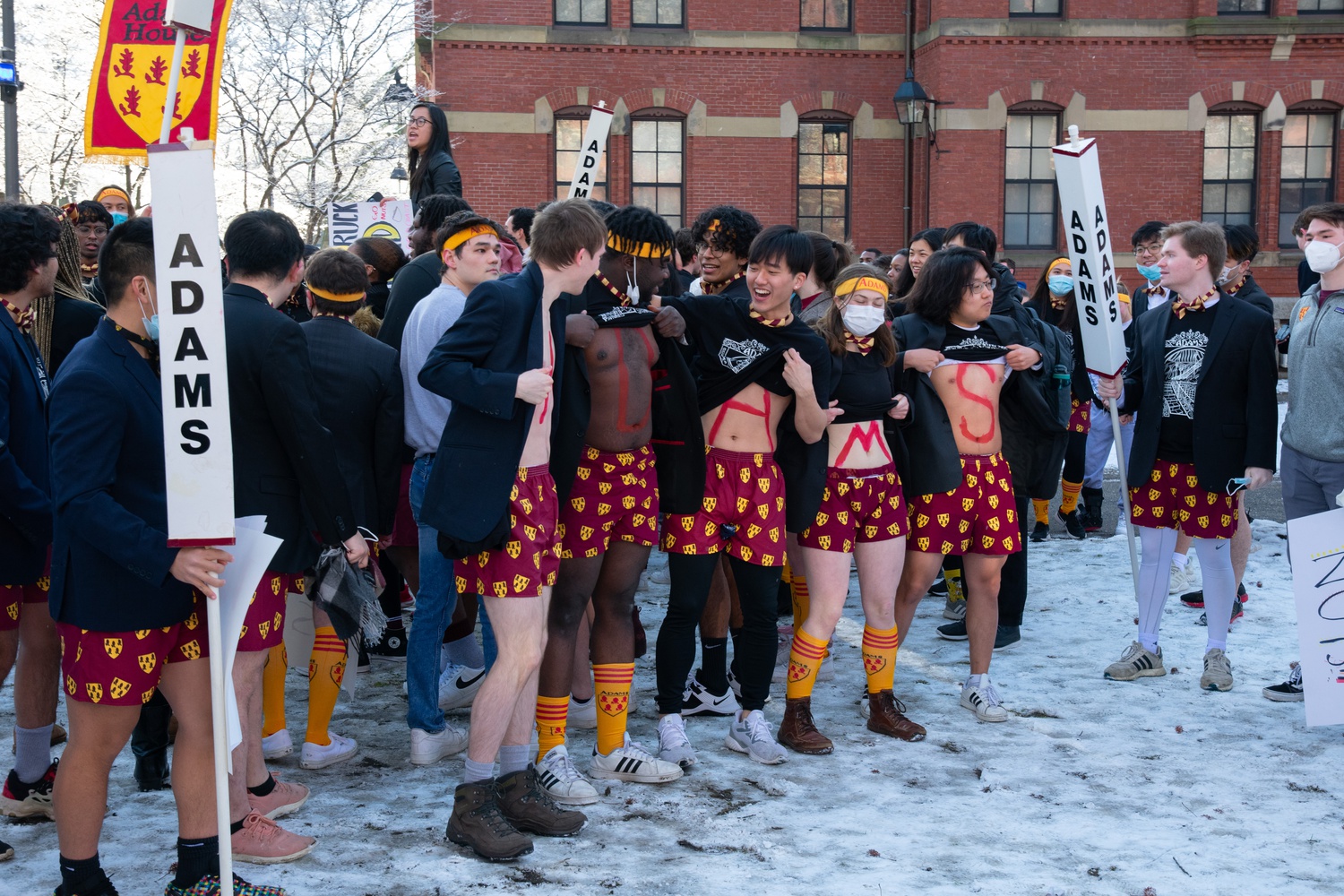 “I heard that the 300 extra freshmen all got quadded,” she said. “That might just be a rumor, but that just made me feel even more like, ‘Wow, I’m really lucky to get a house that I like.’”

After receiving their housing assignments, freshmen had the chance to speak to upperclassmen, grab swag, and learn more about their house on the walkway to Annenberg Hall, where students had set up tables.

Audrey Gunawan ’25 said Housing Day festivities “lived up to everything that [she] expected.”

“I can tell that it’s really exciting for a lot of people, and especially the upperclassmen, who haven’t gotten to have a real in-person Housing Day yet,” Gunawan said. “I’ve been meeting a bunch of people that, turns out, are in my house.”