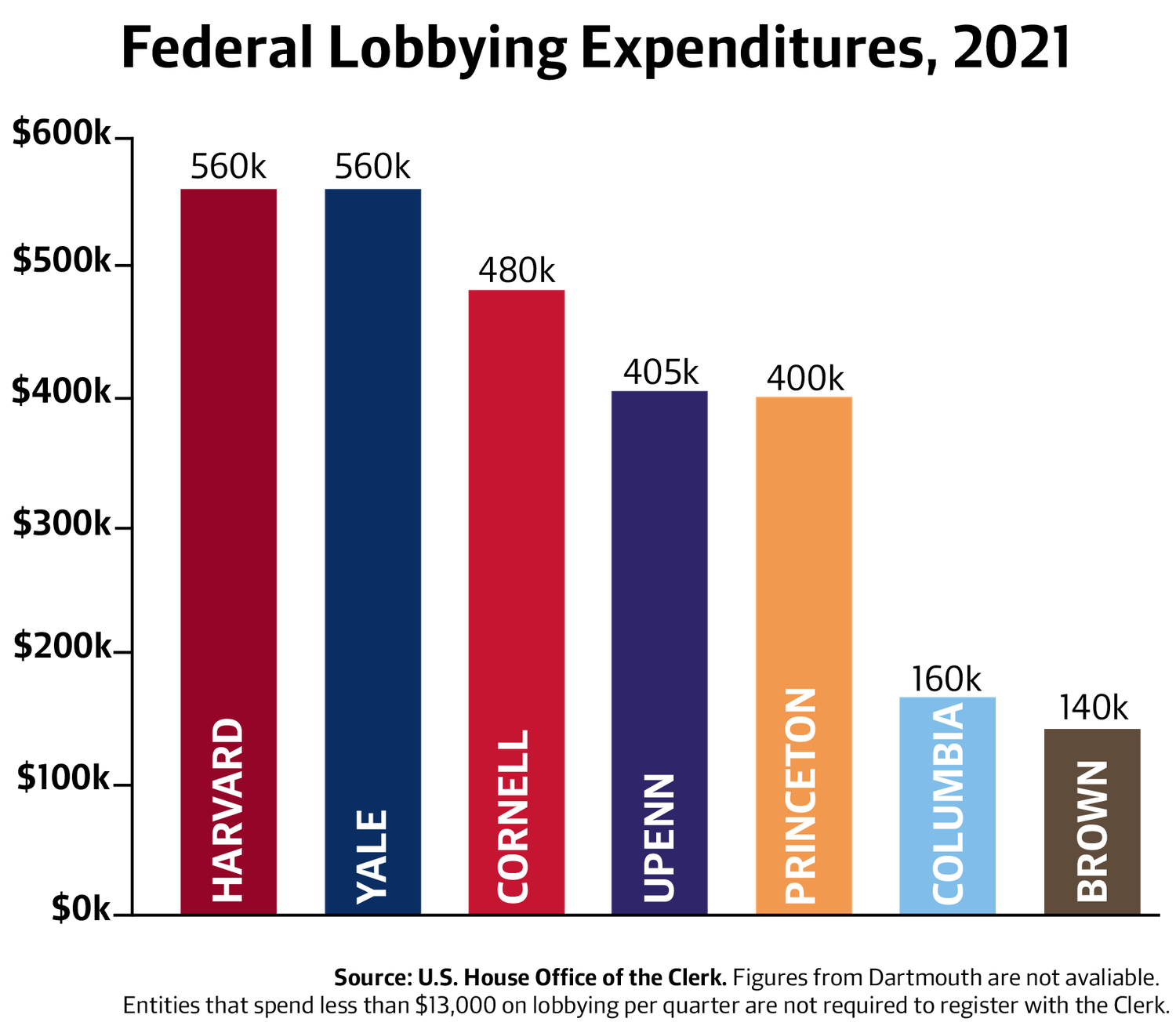 Harvard spent $560,000 on federal lobbying during President Joe Biden’s first year in office, pacing the Ivy League alongside Yale, which spent the same amount. The school's expenditures put it atop the Ivy League for the fifth time in the last six years.

During 2021, representatives from Harvard’s Office of Federal Relations and University President Lawrence S. Bacow continued to lobby the White House and Capitol Hill on key issues related to immigration and higher education, according to Harvard spokesperson Jason A. Newton.

“Key issues include robust federal funding for research and student aid, welcoming immigration policies for international students and scholars, support for DREAMers and other undocumented students, balanced research policies, and incentives for charitable giving,” Newton wrote in an emailed statement.

The University spent $130,000 lobbying in the first quarter of 2021, gradually increasing its quarterly expenditures before plateauing at $145,000 for the second half of the year.

Harvard continued to lobby for increased funding for higher education, including the Pell Grant Preservation and Expansion Act, which is supported by more than 60 American research universities. The act would double the maximum grant amounts under the program and expand its coverage, which currently includes 34 percent of American undergraduates.

Harvard also lobbied in favor of the National Science Foundation for the Future Act, which would fund the NSF through 2026 and expand STEM education.

The University also continued to lobby for immigration reform, most notably the American Dream and Promise Act along with the Dream Act. Both bills would create new avenues to citizenship.

Bacow has penned multiple letters advocating for immigration reform, including one last year calling on the Department of Homeland Security to reinstate the Deferred Action for Childhood Arrivals program, a position endorsed by the Biden administration.

While no immigration reform bills Harvard lobbied for in 2021 passed into law, Congress passed the American Rescue Plan, a Covid-19 relief bill backed by Harvard. Additional bills addressing the pandemic — including the RISE Act to support research related to Covid-19 or disrupted by the pandemic — continue to languish in Congress.

Yale also spent $560,000 on lobbying last year, tying Harvard. Cornell and the University of Pennsylvania trailed close behind, with expenditures of $480,000 and $405,000, respectively. Consistent with previous years, Columbia, Brown, and Dartmouth spent the least out of the Ivy League schools in 2021.

For several consecutive years, Dartmouth’s lobbying activity has fallen below the minimum threshold for disclosure.

Yale, Princeton, and Harvard saw slight increases in lobbying expenditures compared to 2020. Brown, Cornell, and the University of Pennsylvania all continued downward trends in spending that began in 2019.

Harvard, Yale, Princeton, and the University of Pennsylvania lobbied against the excise tax on large university endowments, supporting the Don’t Tax Higher Education Act — a bill that would repeal the endowment tax.

Harvard and Penn also backed a second endowment tax bill, the Higher Education Endowment Tax Reform Act, which would phase out the tax so long as universities give financial aid to students.

Harvard has long contended that the endowment tax undercuts the school’s ability to support its students and research. In an interview with The Crimson in November 2017, former University President Drew G. Faust called the endowment tax a “blow at the strength of higher education.”

The endowment tax is a part of the 2017 Tax Cuts and Jobs Act, the flagship tax reform championed by the Trump administration.

“The University, a charitable tax-exempt organization, is non-partisan, but is active in Washington with policymakers in Congress and the Administration on issues of importance to the University and its faculty and students,” Newton, the Harvard spokesperson, wrote.