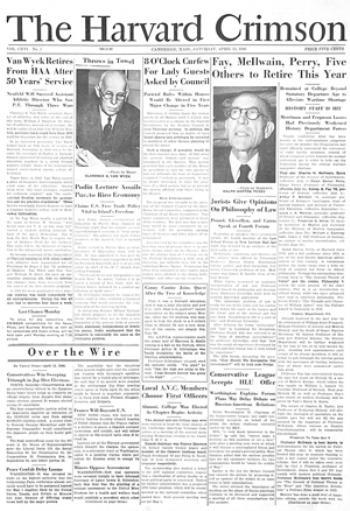 Every Friday, The Crimson publishes a selection of articles that were printed in our pages in years past.

April 10, 1900: Students Asked To Give Up Rooms and Furniture for Cuban Teachers

A meeting of the undersigned members of Harvard University was held last night in the parlor of Phillips Brooks Memorial to consider the housing of the Cuban teachers who will be in Cambridge for six weeks during the summer. All expenses for instruction and board will be paid by Harvard University, and a subscription to that end will be taken up among the graduates. The women, about 900 in number, will be lodged in the private boarding houses of Cambridge and it will be necessary to find rooms, furniture and bedding for the men in the College dormitories. There will be between five and six hundred of them.

Two hundred and ninety high school men are scholarship holders at Harvard this year while only 84 men prepared in private schools received these financial aids.

Boston and its vicinity ranks very high; for about 95 undergraduate holders of these awards were prepared in schools in this district. The Boston Latin School heads the list with 34 winners while Cambridge Latin has 22. There are 39 other men from Boston high schools. This large number is offset by the large percentage of undergraduates who prepared in this district, but in spite of that it shows the high standard maintained by these schools.

The next time your Radcliffe date murmurs in your ear that a dinner at Locke-Ober's would be nice, ignore her. A recent survey discloses that the average freshman gains from 10 to 15 pounds during her first term, largely on her fare in the Annex dorms.

This isn't so remarkable when one considers that last year 'Cliffe-dwellers polished off five tons of roast lamb, four tons of roast beef, three tons of ham, and almost two tons of butter. As if this weren't enough, they topped it off with 12,300 eggs and close to 300 gallons of ice cream.

After the assassination of Martin Luther King Jr. last Thursday evening, ghetto-cities across the country braced themselves for large scale riots. Every possible preventive measure was taken to minimize the violence: King's non-violent legacy was invoked; Johnson cancelled his trip to Hawaii and called for unity; a four p.m. curfew was declared in Washington; police, National Guardsmen, and Federal troops poured into the ghettos.

But after a painful summer of experience, a number of government officials had learned that armed repression often did little more than spread the fires of the riot-revolt. In a rare movement of governmental inventiveness Mayor Kevin White produced and directed one of the most daring scenarios in an effort to keep Roxbury off the riot casuality list.

White faced an inflammable situation when he heard that James Brown, king of soul music, was scheduled to perform in Boston Saturday night. To allow the event to occur without intervention would have been to set the stage for a major incident. All the ingredients were there: a large group of young blacks gathered together, King's murderer still on the loose, and the super-charged excitement of Brown's performance to provide the spark. To close the show down, on the other hand, was equally dangerous. There might easily have been a riot if Brown were not permitted to perform because of an order from White's office. Instead, White used the event to his own advantage, making it a city-sponsored production, and televising it a total of three times to keep Boston's Black population at home glued to the tube instead of out throwing bricks in the streets.

Shortly after noon today, more than 100 demonstrators occupied University Hall. As of 6 p.m., the demonstrators numbering 200—down from 350 at 4 p.m.—were still holding the building.

The demonstrators ejected all Administration officials and staff members from the hall, early in the afternoon, some by force.

Before leaving peacefully at 12:50, Dean Glimp several times told the demonstrators that their continued presence in the hall would subject them to disciplinary action. "You are obstructing the movement of individuals in this building. This alone merits disciplinary action. Furthermore, I am now instructing you to get out of here," Glimp said.