What They Won’t Tell You During Your Virtual Tour

By Peyton A. Jones and Rachel L. Reynolds • 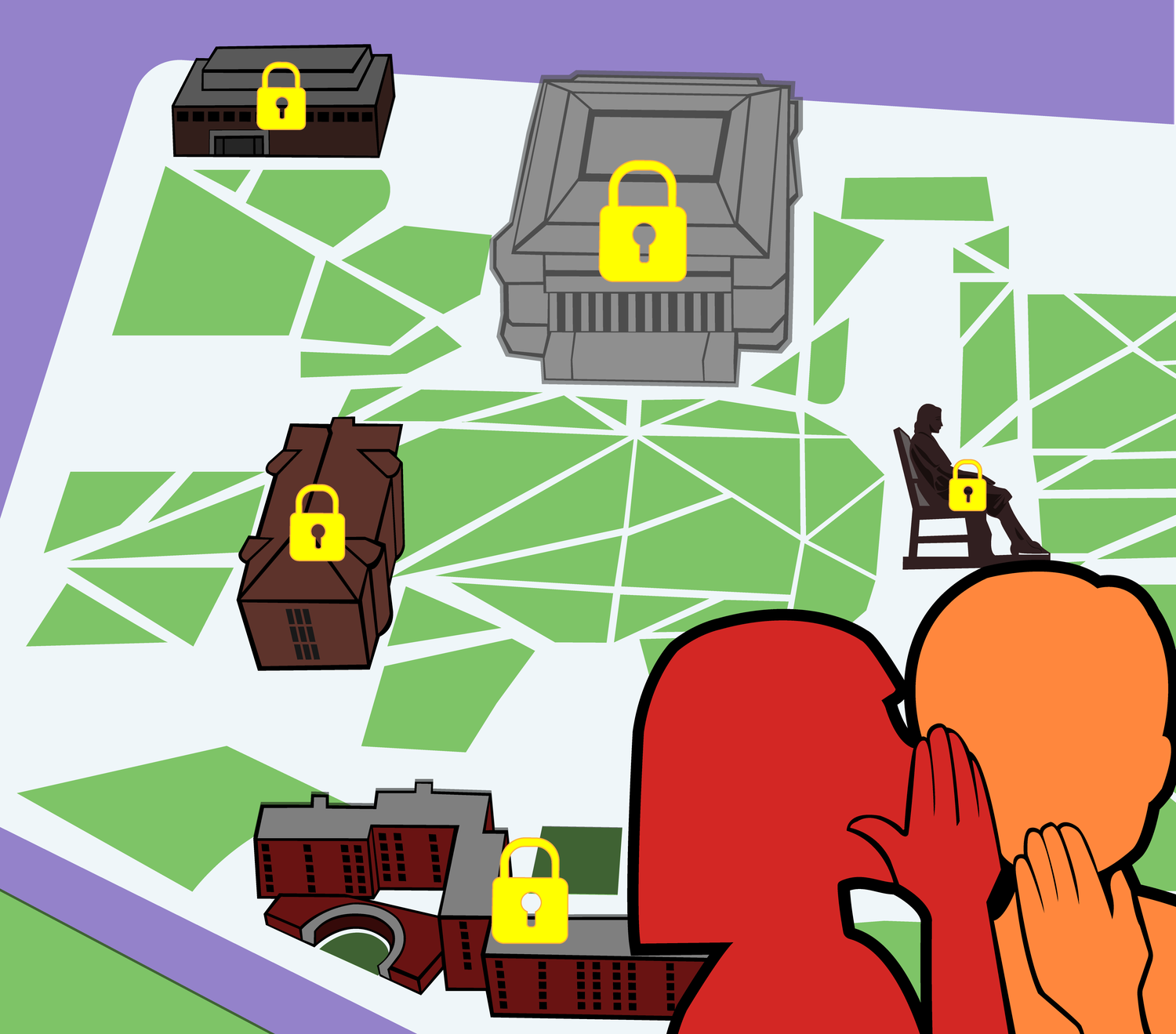 Even though we lost track of time a couple months ago — anyone know if it’s still February? — we’re fast approaching the end of the spring semester. For high school seniors, this means it’s everyone’s been talking about Where You’re Going To College for, like, a billion years. You might have taken plenty of virtual tours by now, but it’s no secret that college tours don’t tell you the whole story. Curious about what the fabled Harvard Yard is actually like? Consider this your in-depth, behind-the-scenes tour of the Yard, courtesy of the lovely writers of Flyby Blog.

As you embark on your first (virtual) journey through the Yard, you’ll inevitably be drawn to everyone’s favorite not-actually-John-Harvard John Harvard statue. Widely known for its not-so-secret tradition involving a certain foot — touch for luck if you’re not a student, pee on it if you are — every student knows about the piss, and if you listen as you walk, you can hear the Very Knowledgeable, Not-Like-The-Other-Tourists tourists imparting this knowledge to their friends.

You will be late to class at least once due to Yard crowds flocking to the statue, so be prepared to reroute your walk or get comfortable with hustling through groups lined up to touch John’s shiny foot. It’s more than likely that during some late-night adventure, peeing on the statue will seem like a fantastic idea. However, approach this tradition with caution: you or someone you know may inevitably be that one person who breaks an arm while scaling Piss Mountain. And, unless you want to see many half-drunk students trying to ~add to the tradition~, we’d personally recommend avoiding this tour spot at night.

Back in the olden days, Widener was known for three things: tourists, being the go-to spot for cute senior thesis pics, and sex. As of last fall, though, the Widener steps have become the spot for outdoor socializing, and apparently “meet me at the steps” is, like, a common phrase. There’s a lot to look forward to about the stately study space in the fall, whether you’re chilling on the steps or actually studying in the Stacks.

First things first, the validation of walking up the steps and studying in such an aesthetic place is truly unparalleled. Also, exploring the Stacks with friends (or friends-with-benefits) is always a fun time, since it’s truly a labyrinth in there! P.S., we’re not telling you that C West is a dark, more secluded corner of the Stacks, but we’re also not not telling you that. ;) Finally, Widener doesn’t just look better in the winter — it is better. Dear reader, it’s up to you to take part in upholding the time-honored tradition of sledding the Widener steps on a Dhall tray after a major snowfall. We hope you’re up to the challenge.

Next up on this Urban Dictionary of virtual tours, we’ve got the ever-beloved Lamont Library. Sure, it may be unassuming on the outside, but on the inside? It’s a wonderland of students (affectionately known as Lamonsters) camped in its cozy seating on the main floor, or on the top floor, a strict no-noise zone with plenty of desks for doing *actual work*. The built-in cafe, a.k.a LamCaf, has all the coffee and snacks you could ever need for those inevitable all-nighters. If you’re really looking to dig into a pset or paper and not move for hours (or dare we say, days) or just don’t want to wade through tourists on your way to study (@Widener), Lamont’s your girl. Note: one of our writers loves Lamont with a burning passion, and stands firm in the claim that LamCaf serves the best lattes on campus. If they bring back BoardPlus, just accept that you’re going to waste invest plenty of your money here.

Ah, Sever Hall. Good, reliable, and only smells a little bit like old people and students’ tears. As you may know from a more “traditional” tour, this classroom building will be a familiar site for anyone exploring GenEd or humanities courses — i.e., we would be shocked if you escape your freshman year without taking at least *one* class in this classic Harvard building. Don’t be scared of the chaotic entrance right when you walk in: here, you’ll really get to see a mix of everyone Harvard has to offer. Not to mention, the benches in each hallway are prime spots to get all the dirt on your section buddy’s latest entryway gossip.

A pro-tip from us to you: make sure to go get a coffee from LamCafe before you settle in for that next class! With the true power combination of being unusually warm, lacking caffeine, and a way-too-soothing professor’s voice in the background, you’ll inevitably find yourself snoozing through a class or two (don’t worry, we won’t judge). Now’s the time to break the high school habit of asking to go to the bathroom (especially in lecture classes — we promise, you can just go) and take a short break down in the basement where you’ll find the restrooms and a vending machine perfect for a mid-class snack.

The Warm Spot By Canaday

Have you ever thought to yourself, “Man, I really wish there was a vaguely garbage-scented patch of hot air right at the border between the Yard and the Science Center”? Well, dearest reader, dreams do come true. Right outside Canaday B (a first-year dorm on campus), there’s a squat little vent that emits some ~questionable~ steam. Much like your future section crush, you might initially think it’s a little odd and kind of trashy, but hey — it’s hot. Once Cambridge winters really get going, you’ll be grateful for the brief respite from the frost that the Warm Spot provides, and probably will end up using it as a toasty rendezvous point more than once.

It looks like Harry Potter! Hell yeah, it does. Berg is a mammoth of a building, and we can attest that her many stained glass windows are as beautiful as you think they are. Annenberg is actually just one part of a massive complex of Harvard buildings — truly the 3-in-1 shampoo of Harvard, but, like, in a good way. The back half is the famed Sanders Theatre, which hosts everything from acapella performances to CS50: “Introduction to Computer Science.” The ginormous basement of Berg is home to various classrooms, music practice rooms, the Cambridge Queen’s Head Pub (a fun place to grab mozz sticks and frequent host of trivia and other club events), and our mortal enemy, FlyBy (note the capital “B”). For the uninitiated, FlyBy is also known as “The Thing Under Annenberg”, and is a grab-and-go bagged lunch line for upperclassmen who can’t make it back to their House’s Dhall between classes. While FlyBy is an essential, in our unbiased opinion, Flyby is just a *little* better.

When you enter Berg, however, the first thing you’ll notice is not the gorgeous mahogany, but the sheer size of the dining hall. There are so many tables in the cavernous hall that the napkin holders are labeled with a letter and a number, so be prepared to inevitably send a “Hey, I’m at B-14, where are y’all??” text at some point. Architecture aside, Annenberg is also legendary for another reason — John! No, not the statue (John from Annenberg is much cooler). John S. Martin is the iconic and friendly card swiper at Annenberg and is a fantastic conversationalist. Other highlights of Annenberg include the cute holiday decor, the Veritaffle station on Sundays, randomly fancy meals, and an unfortunate tray return that will inevitably lead to you breaking a plate or two (probably in front of your crush).

Thus concludes the unofficial tour of the Yard! This list is definitely not exhaustive in terms of locations and details, but we hope we’ve imparted enough knowledge for you to explore the rest in the fall ;) Happy Visitas!