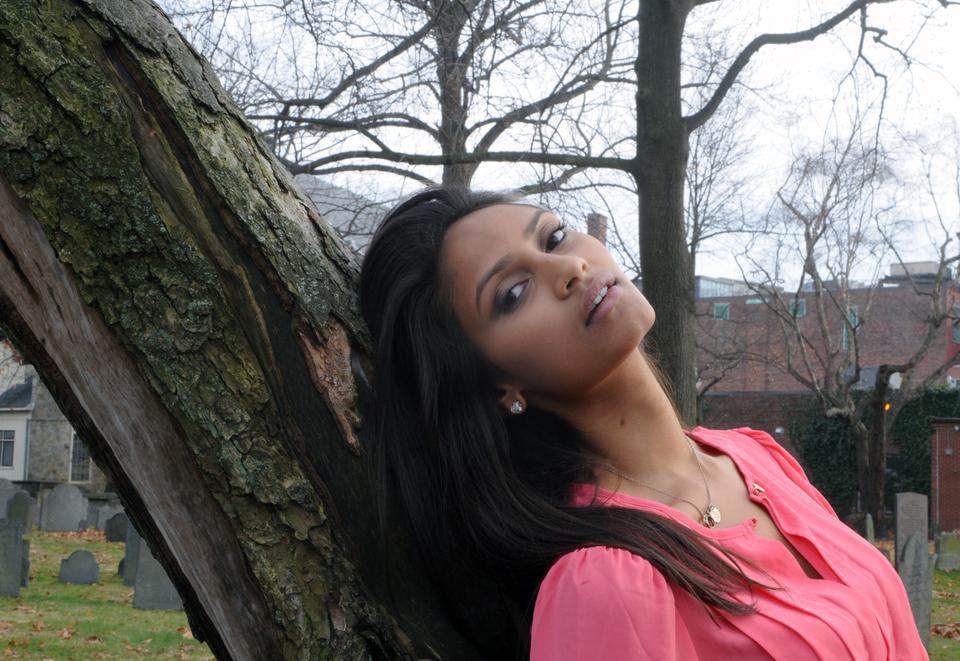 During her freshman spring, Dara received a call from Sports Illustrated asking her to be their cover model and—to vocal support, especially from the Indian media—the first South Asian model ever featured in Sports Illustrated’s swimsuit issue.
By Megan B. Prasad

Watching Sonia S. Dara ’12-13 walk into Eliot dining hall is like watching a model walk down the runway—maybe because Dara has been modeling for seven years. But the economics concentrator, who has walked the runways at both Paris and New York Fashion Weeks, didn’t start off with high fashion dreams.

In fact, Dara’s start was hardly indicative of her future as cover model. “She was absolutely a tomboy. She used to walk around covered in dirt,” says her older sister Jyothsna “Jo” S. Dara. After attempting sports like basketball and volleyball, where she thought her 5’11” height would give her an edge, she realized that her athletic abilities were limited, and started looking for other options.

“I’m obviously tall, so I was kind of hoping that something would come along, and someone suggested that I should try modeling,” Dara says.

Not only did Dara “try” modeling—she excelled at it, and at age 15, the Atlanta native went from tomboy to fashionista, signing with Elite Atlanta and, later, Elite New York.

The young model quickly scored photos in magazines like CosmoGirl and Seventeen. “My close high school friends were really excited. They were picking up CosmoGirl and saying, “Look, Sonia. That’s you.’”

Dara was the first member of her family to be born in the United States, and her Indian heritage has had a strong impact on her modeling career. Her family placed a priority on academics, and Sonia’s success in school made them initially reticent about her desire to choose a career in fashion. But when they realized that she could manage both, they gave her their full support.

After being waitlisted at Harvard, Dara made plans to pursue modeling for a year before starting college.

During her freshman spring, Dara received a call from Sports Illustrated asking her to be their cover model and—to vocal support, especially from the Indian media—the first South Asian model ever featured in Sports Illustrated’s swimsuit issue.

It was a career-changing moment for Dara. “I tried to pose as elegantly as possible because when you have a billion people from the motherland looking at you, you kind of have to be a little bit careful,” says Dara, who took a year off for the launch of the issue and to pursue other modelling opportunities.

Her full resume is even more extensive. In addition to concentrating in economics, Dara, formerly pre-med, will graduate with a secondary in human evolutionary biology and a language citation in Spanish. She is currently considering a job offer from Microsoft in Seattle.

It’s Dara’s aim to someday enter the business and marketing side of fashion. “More and more, now that I’ve been introduced into the fashion industry and the modeling world, and a little to the media side, I started focusing more towards that and towards marketing,” says Dara. “It’s taken me 22 years to come to that.”

By many standards, Dara has had a full career in her 22 years. In the future, whether she walks the runway or runs the show, there’s no doubt she’ll be turning heads and catching eyes.