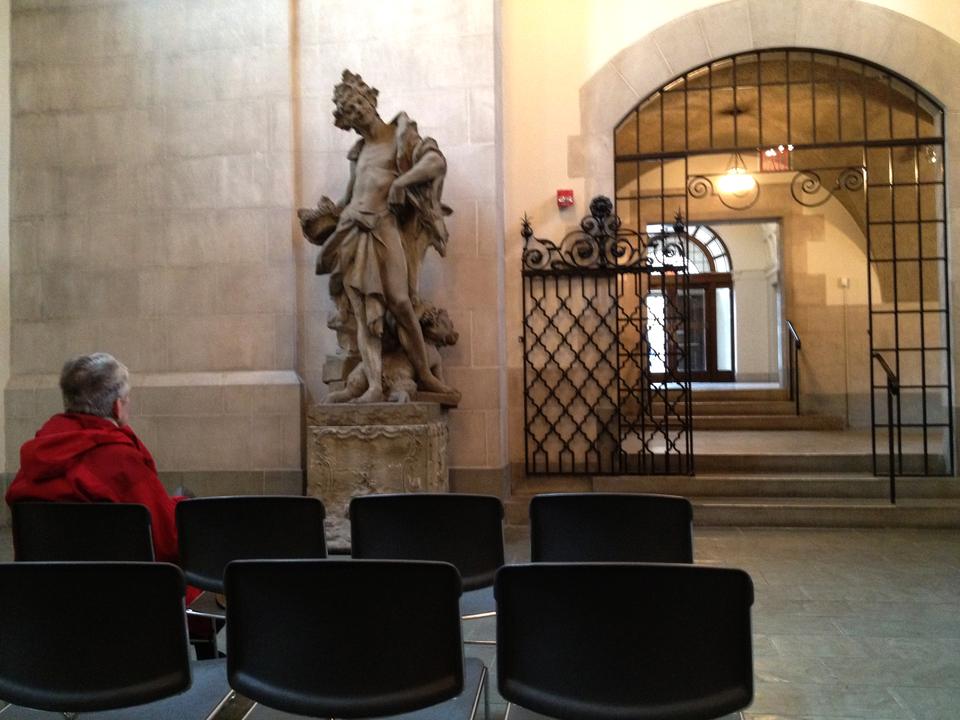 A man holding his wife’s elbow ushers her down the aisle. “It’s over there,” he shout-whispers, tilting her arm up and back to point at the organ.
By Sophie T. Bearman

A man holding his wife’s elbow ushers her down the aisle. “It’s over there,” he shout-whispers, tilting her arm up and back to point at the organ. They settle noisily into the middle seats and look around the hall, their eyes landing on the monumental instrument housed on the balcony. “There are over 3,000 pipes,” the man says to his wife.

It is Thursday, March 29, and two brothers are playing, one on the organ and the other on the trumpet. The balcony wall stands higher than the musician’s seated bodies, and as they begin playing, we surrender ourselves to the music. The melancholy tones rise and fall, filling the hall and the spaces between us. For 30 minutes, we listen.

This is the Lunchtime Recital Series, hosted by the Harvard Organ Society on Thursdays during October, November, March, and April. The recitals are held in Adolphus Busch Hall in the Center for European Studies.

James E. Goldschmidt ’09, the Recitals Coordinator for the Harvard Organ Society, has been with the group since 2005, first as an undergraduate and now as a student at the Law School. He knows the Thursday crowd intimately. “It’s really a cross-section of the community that shows up. Staff on their lunch breaks, students in between classes with Flyby meals, and others, some just locals,” Goldschmidt said.His tone softened as he described one of the regulars. “There’s one man, he always sits in the same place. Back, left, on the stairs...It’s almost like, if he didn’t come, I’m not sure what I would do.”

Beyond regular attendees, the organ itself draws musicians and audience members from afar. Christian M. Lane, Assistant University Organist and Choirmaster, explains that E. Power Biggs, a prominent American organist, commissioned the organ in the fifties to be built into that very space. Once completed, Biggs began hosting weekly, half-hour national radio broadcasts during which he played the instrument.

“Many people of a certain generation heard those broadcasts and know the organ only because of those broadcasts,” Lane said. “We don’t pay anything to our recitalists. People come because they want to be here and want to play this important instrument—this instrument that they’ve heard.”

For 30 minutes every Thursday, from 12:15 – 12:45 p.m., musicians and listeners alike make a small escape. Worried about skipping lunch? Don’t be. Bagged meals are encouraged.