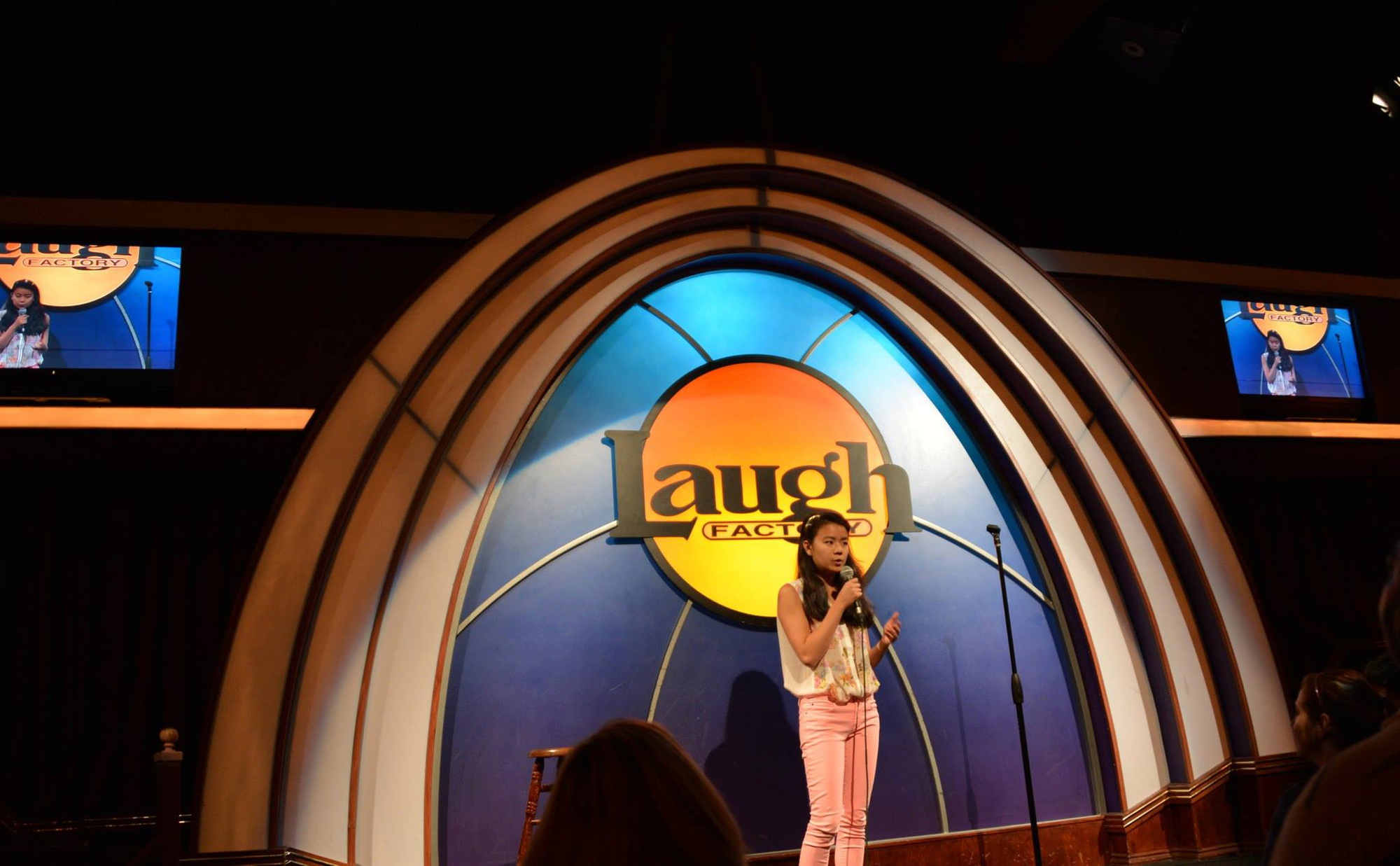 Harvard University Stand Up Comedy Society members meet under the broken, flickering lights of the Quincy House Spindell Room. The question they’re answering differs from those of the p-setters crushing brain break in the adjacent dining hall: “How old were you when you found out Santa wasn’t real?”
By Lena K. Felton

Harvard University Stand Up Comedy Society members meet under the broken, flickering lights of the Quincy House Spindell Room. The question they’re answering differs from those of the p-setters crushing brain break in the adjacent dining hall: “How old were you when you found out Santa wasn’t real?”

The discussion moves to upcoming comedy events, interrupted by more serious matters like q-tips and sex toys. The meeting is popcorn-style, with the comedians jumping in to pitch their newest jokes.

The group, which consists of more than 20 members, is the only official student group for stand up comedians. “I think everyone has a funny side,” said Ethan G. Loewi ’15, who joined HUSUCS this year. “It’s just people who do stand up comedy are more aware of their funny side and are more eager to share it.”

One way to share that funny side is through performing on-campus at on-campus events like Winthrop Stein Club. A half-hour before the show, the 10 featured comedians huddle tensely in tight circles, scribbling down notes and mouthing the words to their sets.

“Wide Awake” and “Safe and Sound” blast out from speakers to break the pre-show tension before the audience arrives. Stand up veteran Manny I. “Fox” Morone ’14, who’s sporting a casual gray hoodie and running sneakers for the performance, shakes his hips to the music.

“Really, you only get nervous if you haven’t gone on stage in a while,” Morone explained. “It’s really completely related to your confidence in your own material. If you go on stage and are like ‘I know this is funny,’ then you won’t be nervous.”

Minutes later, the comedians garner laughs from a crowded Junior Common Room. Laughter is essential to any successful stand up performance. “I don’t have a fear of performing or public speaking,” Loewi said, “but stand up is a whole different animal, because you need the audience to laugh.”

Starting Out Stand Up

For many group members, HUSUCS was their introduction into stand-up comedy. Dan J. Fitzpatrick ’15, HUSUCS co-president, got involved in HUSUCS simply to try something new. “I first heard about it at the activities fair my freshman year,” Fitzpatrick explained, stroking his chin. “I’d always been sort of interested in comedy, so I thought I’d give that a whirl.”

Morone jumped into the stand up world by performing at a comedy club off-campus during his freshman fall. The show “just went really, really poorly,” Morone said. “It wasn’t even like a bad crowd—sometimes you can blame it on the crowd, but I couldn’t.”

Despite what he deemed a “really shitty” performance, Morone kept pursuing stand up. “That’s the point where you kind of say like, ‘This is something that I like to do,’” Morone said. “It’s that thing that even if you’re bad at it you still want to get better or keep doing it.”

Like Morone’s own comedy, the HUSUCS has also evolved. When Morone joined in 2010, “it was a really, really small group, like about five people,” he said. The group was officially recognized by the College in 2007, and has expanded since.

“We’re a really tight group I think,” Fitzpatrick said. “We certainly have gotten a lot more  prominent and larger over the last couple of years or so. Last fall we made a really big recruiting effort and since then we’ve just made a bigger push to advertise our shows.”

Devon M. Guinn ’17, one of the youngest performers at the Stein Club show, has already established a place in the group. Guinn’s set ranges from Super Mario to Tibetan throat singing impressions. At one point in the Winthrop Stein Club show, after asking an audience member  where she’s from, Guinn replies, “Oh really? I’d guess you were from Tennessee… Because I bet it hurt when you fell from the sk - Oh shit,” and then walks off stage, getting a high five or two from his fellow stand up comedians. “It’s fun, because everyone’s really welcoming,” Guinn said. “There are fun opportunities for freshmen to do shows.”

Sierra L. Katow ’16 started doing stand up shows at clubs in Los Angeles, her hometown, at the age of 16, but recognizes the depth of opportunity for stand up comedians at Harvard. “It’s interesting, because back in the real world, or whatever you want to call it, you have to wait in line for a few hours just to get three minutes on stage when you’re not established yet,” Katow said. “Here, there are so many opportunities.”

Outside of HUSUCS, a few members are involved in stand up comedy in the greater Boston area. Morone and Fitzpatrick have performed at The Comedy Studio, located above Hong Kong, and at ImprovBoston, an improvisational theater in Cambridge.

Both found that there is a significant difference between performing for Harvard and non-Harvard audiences. “I think Harvard audiences are probably smarter and more polite,” Fitzpatrick said. “I think just because we’re all students at the same school they probably have more incentive to root for you to do well, whereas other people don’t care as much.”

For Morone, performing for non-Harvard audiences is good practice. “I think it’s useful, because you get an audience that represents most people instead of an audience of people that you basically see every day,” he said.

Katow, has also found success performing outside of the Harvard community. She performed during the summer, and is “finally getting paid at some colleges,” she said.

Although the world of stand up is relatively male-dominated, Katow has carved out a place for herself. “I’ve noticed being a woman in comedy, because there’s so few of you, is almost an advantage,” Katow said. “You have a certain point-of-view, and stand up comedy is all about telling your own story.”

When thinking of how to tell their own story, the Harvard stand up comedians are constantly scouring their environments for inspiration. According to Fitzpatrick, there’s no formula for joke-creating. “Most of the time you can’t just sit down and write something, you have to just have something pop into your head,” he explained. “And that can come from any random stream of consciousness or conversation with friends or something else you came across or were reading.”

This constant search for material can prove to be difficult. “It’s labor-intensive,” Loewi said. “People don’t realize. On stage, you’ve got to make it look casual.”

Before performing, Morone works on his jokes without sharing them with others. “It is still a very lonely activity in that I don’t like to share my material with people until I perform it, unless maybe if they’re in the stand up group,” Morone said. “I rehearse whatever to myself like the day before. It can be for many hours, just me alone in a room.”

Each comedian has his or her own style; some students prefer punchy jokes, while others create more story-based sets. Fitzpatrick prefers “jokes that are on the shorter side but have a very absurdist twist to them,” Fitzpatrick said. “Also ones that are clever but not necessarily being extremely dirty.” For example, one joke he wrote goes, “Why can’t Jesus ever finish the New York Times Sunday Puzzle? Because he always gets stuck on across.”

Comedian Anthony H. Zonfrelli ’14 is known at HUSUCS as “the master of the one-liner.” For Zonfrelli, it’s critical that he memorizes his jokes perfectly. “My set up is distinct, and if I screw up even just one word, everyone knows that was a failed attempt at a joke,” Zonfrelli said.

Zonfrelli ends the Stein Club set with one of his favorites. “I’m always really respectful to my girlfriends,” Zonfrelli begins with a straight face. “Especially in the beginning of a relationship. For instance, I never take a girl out to a rated-R movie on the first date. I want her to think of me as a nicer, more innocent guy. Not just a guy who can get her into rated-R movies.”

As the Stein Club Show wraps up, the comedians gather their backpacks and split ways to walk home. It’s a Thursday night, so no post-show party. Katow, who came from a midterm, is about to go study. Within minutes, the JCR is empty except for a few Winthrop residents who linger by the alcohol.

For most of these performers stand up comedy is still a part-time gig at the moment. However, Morone thinks he will continue performing “at the very least on the side, if I can,” he says. “I think I’m okay at it, and not only that, but you see a lot of people who are objectively worse than me who at least kind of make a living.”

Fitzpatrick agrees that he wants to stick with comedy. “Everybody sucks for years at a time before they get good,” he explained. “You really have to do it for years before you find your voice and build a reputation for yourself.”