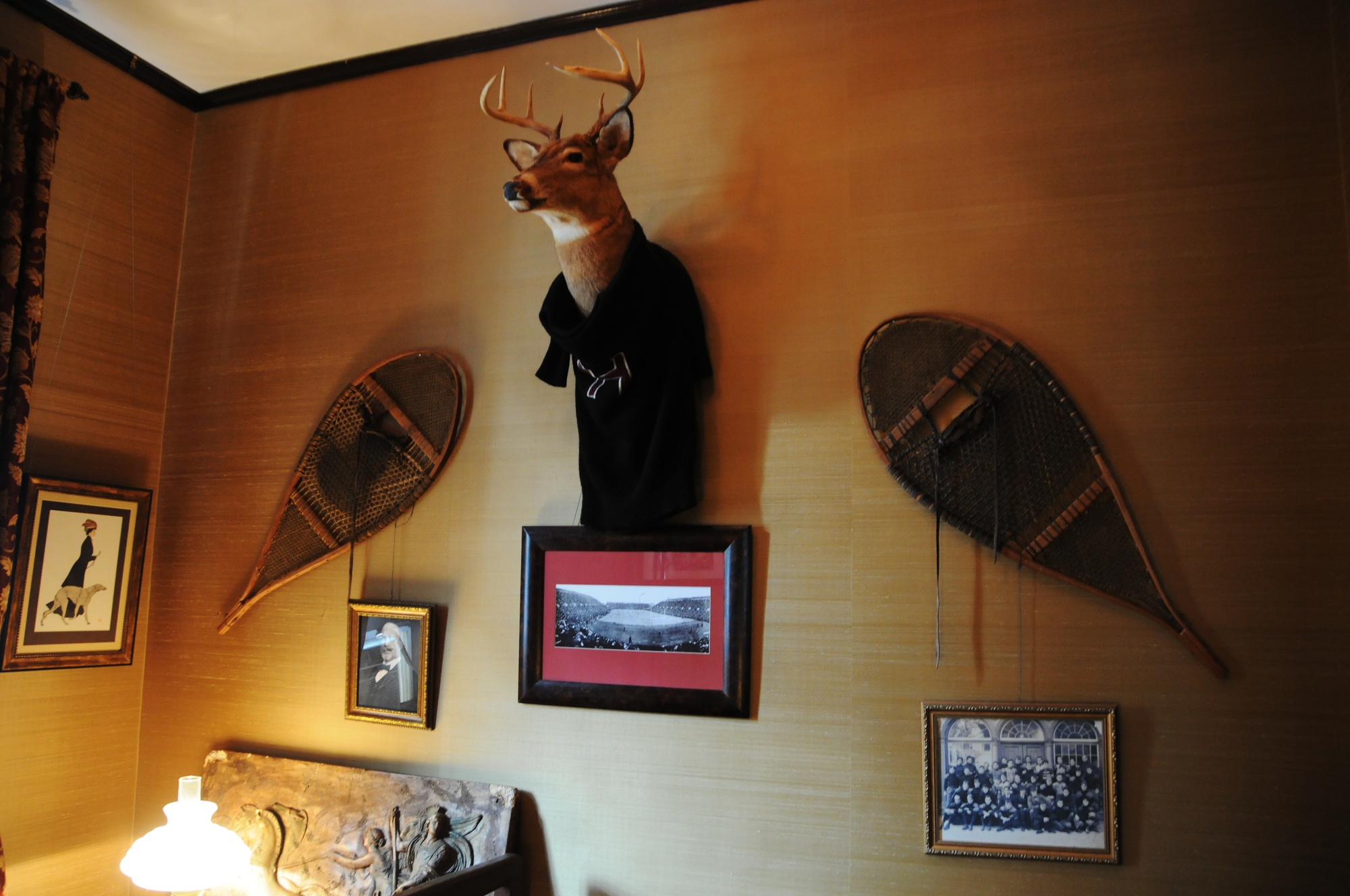 It cost $450 to rent the two person suite on Westmorely Hall’s first floor in 1900—three times Harvard’s $150 tuition cost. Franklin D. Roosevelt and his roommate Lathrop Brown, both in the Class of 1904, split the cost of their room right down the middle, paying $225.50 before utilities and maintenance for each year they roomed together.
By Ginny C. Fahs

“We went to the different agents & went over all the buildings, Randolph, Claverly, Russell & Westmorely. We saw many rooms but the pick was Westmorely, 1st floor corner, looking on the southwest […] The sitting room is large enough for two desks, & the bedrooms & the bath room light & airy. The ceilings are very high.”' —Franklin Delano Roosevelt in a letter to his parents, January 9, 1900

It cost $450 to rent the two person suite on Westmorely Hall’s first floor in 1900—three times Harvard’s $150 tuition cost. Franklin D. Roosevelt and his roommate Lathrop Brown, both in the Class of 1904, split the cost of their room right down the middle, paying $225.50 before utilities and maintenance for each year they roomed together. They both came to Harvard from Groton and would become roommates in Westmorely’s first floor room, now Adams B-17, from 1900-1904.

Crossing the threshold of Adams B-17 feels like walking into the Gilded Age. Ivory keys move on the player piano in the corner as it twinkles out a happy, Ragtime song, one of over 5,000 pieces the piano can play of its own accord. The curtain strings have tassels, the frames on the walls shine gold; plump cushions dot the couch and the armchairs that recline by the fireplace.

Michael D. Weishan ’86 sits at a desk by the corner window much like Roosevelt’s old one. Rays of sunlight stream through the glass onto his MacBook just as they may have illuminated Roosevelt’s papers and ink pens over a hundred years ago. An Adams House alum who helped spearhead the FDR Suite recreation, Weishan grins as he stands up from his chair and strides across the room to turn off the piano player and begin the tour of Roosevelt’s suite.

Five years ago, Adams B-17 was just a white-walled, bare-floored dorm room; students lived in the room as recently as 2003. Adams House Masters Judith Palfrey ’67 and Sean Palfrey ’67—who is the great-grandson of Theodore Roosevelt—were the first to initiate an effort to restore the FDR suite to the condition it was in when Roosevelt inhabited it.

2008 saw the formation of the FDR Suite Foundation, a 501(c)3 that formed to expand Roosevelt’s legacy and preserve the historic nature of Adams House. Under the leadership of Weishan and Rev. George Saltzman, the Catholic Chaplain to the Harvard Graduate Schools, the FDR Suite Foundation raised money outside of Harvard’s standard fundraising channels and began working towards the Palfrey’s vision of recreating the suite that Franklin D. Roosevelt once called home.

The Foundation reimagined Roosevelt’s room using a time capsule found in the Harvard Archives that dated back to 1900, the very year that Roosevelt arrived at Harvard. The capsule included letters written by both students and professors from that year as well as photographs of 80 student dormitory rooms. “It’s remarkable because this is the only year when that happened,” says Weishan of the time capsule. “There are no photographs from the decade before, no photographs from the decade after, but for the very year [Roosevelt] came we have about 80 pictures.”

Even though none of the photographs show Roosevelt’s specific room, Weishan was able to take some cues from further historical research to carefully configure a suite similar to what Roosevelt’s may have been like. “It became a kind of obsession,” Weishan says of his drive to recreate the suite.

Weishan arranged to have the common room’s wallpaper recreated for around $20,000 based on a small shard of plaster painted in a faded purple and green pattern that he found behind the radiator. An authentic box that once contained Egyptian Deity cigarettes sits on a side-table—Weishan tracked down the brand after he saw it advertised in copies of The Crimson from Roosevelt’s years in school.

“You can find amazing things but need to know enough to ask the question,” says Weishan, referencing the many hundreds of items he has tracked down in an effort to restore the suite. He was ultimately able to acquire many of the items he was seeking online. “This is the museum that eBay built,” he proclaims.

Only a quarter of Harvard students lived on campus when Roosevelt was at Harvard, and his “Gold Coast” suite in one of Adams’ most glamorous entryways included central heating, a fireplace, its own bathroom, maid service, breakfast in bed until 11 a.m., a solarium on the roof, and a beautiful pool next door. At this time, Harvard’s student body was almost exclusively white, Protestant men from New England. Beyond these demographics, students fell into one of two groups: the Digs or the Clubmen.

The Digs came to Harvard to study. The Clubmen, on the other hand, typically came from prestigious boarding and day schools, and their wealth enabled them to prioritize socializing, meeting future business partners, contacts, and friends, and, most importantly, finding wives.

Getting a degree was not a priority for the Clubmen—attending Harvard and making connections at the school was enough. As such, Brown maintained a D average while a Harvard student, and Roosevelt bested him only slightly with a C+.

The life of a Harvard Clubman was saturated with entertainment, festivity, and revelry. Weishan motions towards the walls of the common room to show off a poster from the Hasty Pudding production, “Boodle & Co.,” that Roosevelt wrote about in a 1904 letter to his mother, Sara. A frame on the opposing mantlepiece contains a photograph of John the Orangeman, Harvard’s mascot at the turn of the century who sold “fruit”—undercover booze, Weishan mutters—to all of the students in Cambridge.

Because Cambridge was dry at the time, students could not purchase alcohol legally anywhere near campus.In a dry Cambridge, final clubs were essential for buying alcohol covertly and facilitating the social experience for Harvard’s elite students. Clubmen also frequented social events throughout Massachusetts, making a full circuit of debutante dances in the suburbs, attending Saturday evening dance classes at the Somerset Hotel, ice-skating on Fresh Pond, rowing on the Charles, and shooting ducks on weekend hunting trips in Newburyport.

The students’ affinity for hunting is remembered in the FDR suite through the taxidermy animals that stand frozen atop Lathrop’s dresser and the common room piano. Weishan pats the head of a stuffed fox as he walks by.

“Lots of people say this [suite] is a monument to opulence,” Weishan says, swishing his hands as he gazes around the common room, “But we see this as a monument to change.” He pauses. “It is a monument to the Gilded Age, but also to the folly of the gilded age—to how much Harvard has moved on since those years.”