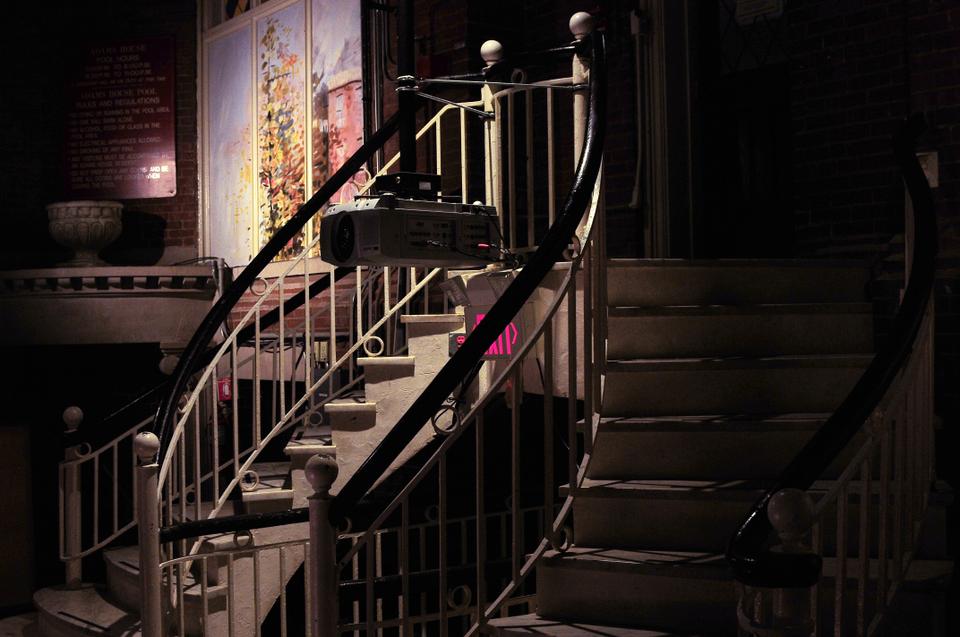 No Swimming in the Pool

Into the front door of Adams C-entryway, past the lobby and the dining hall, through a vestibule, and beyond the bustling dishroom lies the Adams Pool Theater.
By Olivia M. Munk

Into the front door of Adams C-entryway, past the lobby and the dining hall, through a vestibule, and beyond the bustling dishroom lies the Adams Pool Theater. The Adams Pool Theater is one of many artistic spaces Harvard has re-worked in its 377-year history. The Barker Center, reclaimed in 1997 as a center for the humanities at Harvard, used to be a dining hall for freshmen; Radcliffe women took classes in what is now the Agassiz House Theater; Memorial Hall housed a shooting range in its basement, which now has an assortment of music practice rooms.

Adams House, built around the turn of the 20th century as private dormitories for students who were accustomed to the finer things in life, is the only house at Harvard to have ever maintained a pool. These so-called “Gold Coast” facilities were considered a beacon of wealth at a college known for its old boys’ club.

“Westmorly, as was Claverly and Randolph, were built as fancy apartment buildings,” says Adams House Co-Master John “Sean” G. Palfrey ’67. “The newest ones were built when buildings were transitioning from gas to electric. They had all sorts of elaborate architectural structures; the buildings were supposed to include athletic facilities.” According to an article in The Gold Coaster, the Adams House alumni magazine, wealthy families such as the Vanderbilts paid upwards of $800 a year for their children to enjoy the newfangled creature comforts of central heating, telephones, and indoor plumbing.

“It was built as a resort, almost,” Palfrey says. “They had amenities that the boarding houses around Cambridge did not have, so that the richer families could have their children, sons particularly, housed appropriately for their stature.”

Bathing suits were not mandatory attire when the Adams Pool opened in 1902. “People swam nude. Some girls would come and every so often, probably things would happen, although I wasn’t here to witness,” chuckles Palfrey. Swimming tests and races were conducted sans suits at the Adams Pool, where the only residents were male until the 1970s. Before the advent of waterproof synthetic fibers, swimming in the nude was considered more hygienic, and traditional fibers clogged the filtration system.

When the Adams Pool was officially closed in 1990, the infrastructure was showing its age. The water was often green, and the hidden jewel of the Gold Coast was losing its luster. The word among students was that the administration was fed-up with the debauchery in the pool, although the official reason was that the pool was simply too costly. “I think it became very expensive to maintain, because there were infrastructure issues. The question became, is this a luxury? A decision was made to convert it to a theater,” says Dean of Freshmen Thomas A. Dingman ’67.

Palfrey similarly notes that maintenance issues were a huge factor in the pool’s closing, citing a figure of $150,000—in the economy of the 1980s—as a ballpark figure in the pool’s renovation cost. However, there were larger reasons looming that were out of the control of the students, administrators, and even the largest of college endowments. “It was the beginning of the AIDS epidemic, and people were skittish about sexual activity happening in the pool,” reasons Palfrey.

Based on these factors, former Adams House Master Robert J. Kiely chose to close the pool. He wrote in an email, “It remained empty for a few years until our drama tutor Art Shettle and Superintendent Billy Long came up with a plan to install seats from an old lecture hall and turn it into a theater. I heartily agreed, secured money from the Dean of the College; and we had a grand opening with, of course, ‘La Cage Aux Folles.’”

Today, the Pool Theater is a venue for lectures, plays, musicals, movies, readings, and more. It’s still clear, however, that the theater was once designed for swimming. White, weathered tiles line the walls; a majestic, twisting double staircase tops the seating area; a bust of Neptune, a River God that freshman toast to with Rubinoff on Housing Day Eve, remains glaring at the audience from behind a black curtain. When the curtain is drawn and the lights are down, one feels transported to the Chamber of Secrets.

“Adams didn’t want to completely get rid of it, so they turned it into a drama theater,” says Walsh. “Adams left up pool signs to remind people of the actual pool that was there. Now it’s something that we use.” Walsh cites a fond memory of Adams residents watching a movie on a snowy winter’s night, while Palfrey remembers annual thesis shows.

“Things like that,” he notes. “All the way from academic, to literary, and to dramatic.”