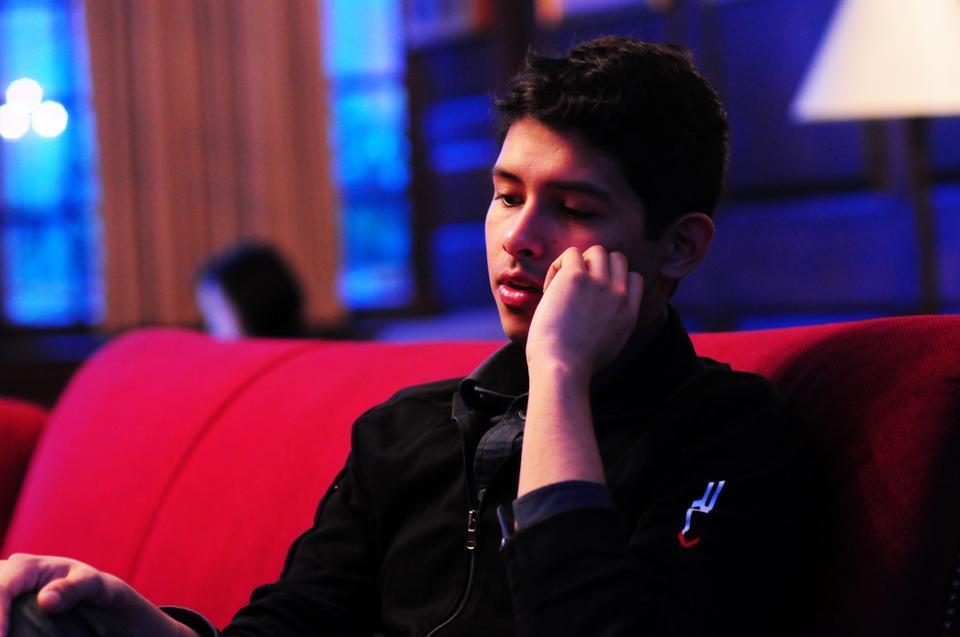 For undocumented students, even small steps toward more comprehensive reform can have a big impact. Before DACA, Ramírez says, he had no idea what life after college would bring. While his peers would be vying for scholarships, spots in graduate schools, and prestigious jobs, he feared he would have no choice but to engage in manual labor because of his undocumented status.
By Marina Molarsky-Beck and Valeria M. Pelet

When Alex C. Boota ’15 learned that his freshman year roommate, Dario Guerrero-Meneses ’15 was an undocumented immigrant, he was shocked. “It just blew my mind that there were undocumented people at Harvard,” says Boota. He adds quickly, “Coming from South Carolina, I’m probably a little sheltered.”

Today, a year and a half after Boota and Guerrero-Meneses ended up in the same dorm room, the two have just finished editing the final, 40-minute cut of the documentary film they co-directed, shot, and edited, “A Dream Deferred.” The film follows three undocumented Harvard students around campus and to their hometowns.

One scene features a student checking the status of his immigration case from his standard-issue desk in Wigglesworth, his hand hovering over an American flag mouse pad. In another student’s dorm, across campus, the camera sweeps from the student’s face to pictures of Led Zeppelin and Emma Watson, poster-gummed to the walls. A junior walks around the southern California city where she grew up, pointing out landmarks of her childhood.

Boota became interested in making the documentary, he says, because of his roommate. He explains that Guerrero-Meneses was unable to accept an offer of a research assistantship because his immigration status prevented him from working, and the law prevented the University from letting him work for free. “He was shut out of a lot of the opportunities that other students just take for granted,” Boota says.

“When you first come here, you really feel a sense of belonging, because for the first time, you were accepted. Harvard knew that I was undocumented,” says Enrique Ramírez ’16, an undocumented student who was featured in “A Dream Deferred.” Ramírez, a freshman, serves as co-chair of the IOP’s Immigration Policy Group and as the Legislative Director of Act on a Dream at Harvard College, a student-run organization that advocates for immigrant rights.

“You meet people [at Harvard] that come from all sorts of issues,” says Ramírez. “I’m undocumented, and that’s kind of been an obstacle, but other people have more obstacles, or obstacles that I hear about and think, ‘Okay, I’d rather be undocumented. It’s not so bad.’”

Ramírez’s testimony signals a significant change in the Harvard community’s attitude towards issues of immigration. Melissa V. Pérez ’13, who formerly served as Act on a Dream’s co-director, says that graduates of the Class of 2009 found it difficult to openly talk about their status as undocumented students. They told her of instances when they would be overwhelmed by what they felt was an ongoing crisis: the uncertainty that loomed around their futures. At times, they said, they would reach out to proctors and tutors only to be blatantly ignored or pushed away because their undocumented status turned them into a potential liability.

Pérez believes that Act on a Dream has gradually allowed for some of those muted conversations to take place on campus. When the organization started, it did not have members that self-identified as undocumented students.

“Many of us were affected by this issue personally, but none of us were necessarily undocumented,” Pérez says. “Slowly, the organization has grown as a presence on campus and these students know they have a source of support.”

Yet navigating Harvard as an undocumented student certainly comes with its difficulties. Castellanos admits that he is unable to obtain jobs or internships because he has been waiting to hear back on his deferred action status for more than seven months. Deferred Action for Childhood Arrivals, an executive order passed by the Obama administration last year, “protects undocumented students from deportation,” according to Act on a Dream’s website. Under DACA, undocumented students can also apply for two-year work permits.

“I can’t emphasize this enough,” Ramírez says, “DACA has completely changed everything.”

Yet DACA does not provide a path to citizenship for undocumented young people, and does not represent the comprehensive immigration reform envisioned in the DREAM Act.

“Even with DACA, there’s still issues with students ‘coming out’—you have to admit you’re undocumented,” Ramírez adds. “There’s still people who are really uncomfortable with doing that. There are no specific safe spaces—and where would a student like that go?”

Ramírez maintains that such an arrangement is simply not enough to meet all undocumented students’ needs.

Guerrero-Meneses says that he believes the University should play a more active role in providing resources to undocumented students.

“I feel as if the school has a certain responsibility to do that, because it provides resources for students from so many legal and socioeconomic situations,” says Guerrero-Meneses. “It provides the guidance networks for them. It would only make sense for the school to do the same for this other group of students. It just doesn’t seem right.”

Guerrero-Meneses says two law professors he interviewed for “A Dream Deferred” later asked him to cut the footage. He speculates that the professors were concerned that the University would face repercussions for its acceptance of undocumented students.

“That sort of let me see what Harvard’s attitude really was,” says Guerrero-Meneses. “It’s friendly, but at the same time, it’s trying to hide that fact that there are students like this at Harvard.”

Eric Balderas ’14, another undocumented Harvard student, has a more positive assessment of the University’s approach. “It’s really just a matter of putting yourself out there to a few, key individuals, persons that you trust,” says Balderas. “I think it’s a tricky situation for the administration, but they’re there, and I feel like they offer a lot of support.”

The summer after his freshman year at Harvard, in June of 2010, Balderas was flying from his home in Texas back to Cambridge to do research at MIT when he was detained at the airport. He was let go, he says, after about eight hours, and allowed to travel on to Boston. But his case remained pending. He faced deportation to Mexico, a country he had left at the age of four.

When he landed in Boston, Balderas launched a campaign with friends involved in migrant activism in the area. When the case began to receive media attention, Balderas said, Harvard came to him and offered to help.

Students from Act on a Dream contacted the Immigration and Refugee Clinic at the Harvard Law School and put Balderas in contact with its director, Professor Deborah Anker. Professor Anker helped Balderas receive prosecutorial discretion, which de-prioritized him for deportation.

That fall, Univeristy President Drew G. Faust accompanied Balderas to Washington D.C. to meet with Senator Richard Durbin (D) of Illinois, one of the original proponents of the DREAM Act, to draw further attention to the case.

“When I was threatened with deportation, it resolved itself pretty quickly,” says Balderas. “I’ve felt very protected after that.”

On April 17, a bipartisan group of eight senators, known as the “gang of eight,” presented an immigration bill meant to overhaul what many see as the nation’s broken immigration system. While critics claim the new bill leaves much to be desired, activists at Harvard feel the bill presents yet another opportunity for the University and its students to increase awareness about immigration on campus.

“There’s been a growing, more enthusiastic movement nationally that has made the campus a lot more receptive to issues of immigration,” says Pérez, recalling when legislators reintroduced the DREAM Act in 2009.

“When the DREAM Act came up to a vote, we thought the bill wouldn’t fly,” Pérez says, “But we worked with Harvard to lobby with senators anyway.”

Harvard itself has played a role in the wider immigration debate: in 2009, Faust officially endorsed the DREAM Act. María Romero, co-director of the IOP’s Immigration Policy Group, says that Faust’s support marked a huge change not only in the culture of the College, but in the national dialogue surrounding immigration.

“That was when the DREAM Act was really a hot button issue, so there was a lot of pressure from the outside to make a statement about it,” Romero says. “It was one that there were few precedents for, so it definitely was one that required a lot of proactive movement on her part and the part of the administration.”

For undocumented students, even small steps toward more comprehensive reform can have a big impact. Before DACA, Ramírez says, he had no idea what life after college would bring. While his peers would be vying for scholarships, spots in graduate schools, and prestigious jobs, he feared he would have no choice but to engage in manual labor because of his undocumented status.

“It was something I was constantly thinking about, ‘what if,’” he says. “Here, it’s a totally different world. I feel like I can do a lot of things, especially being around very accomplished people. I feel like it’s possible.”