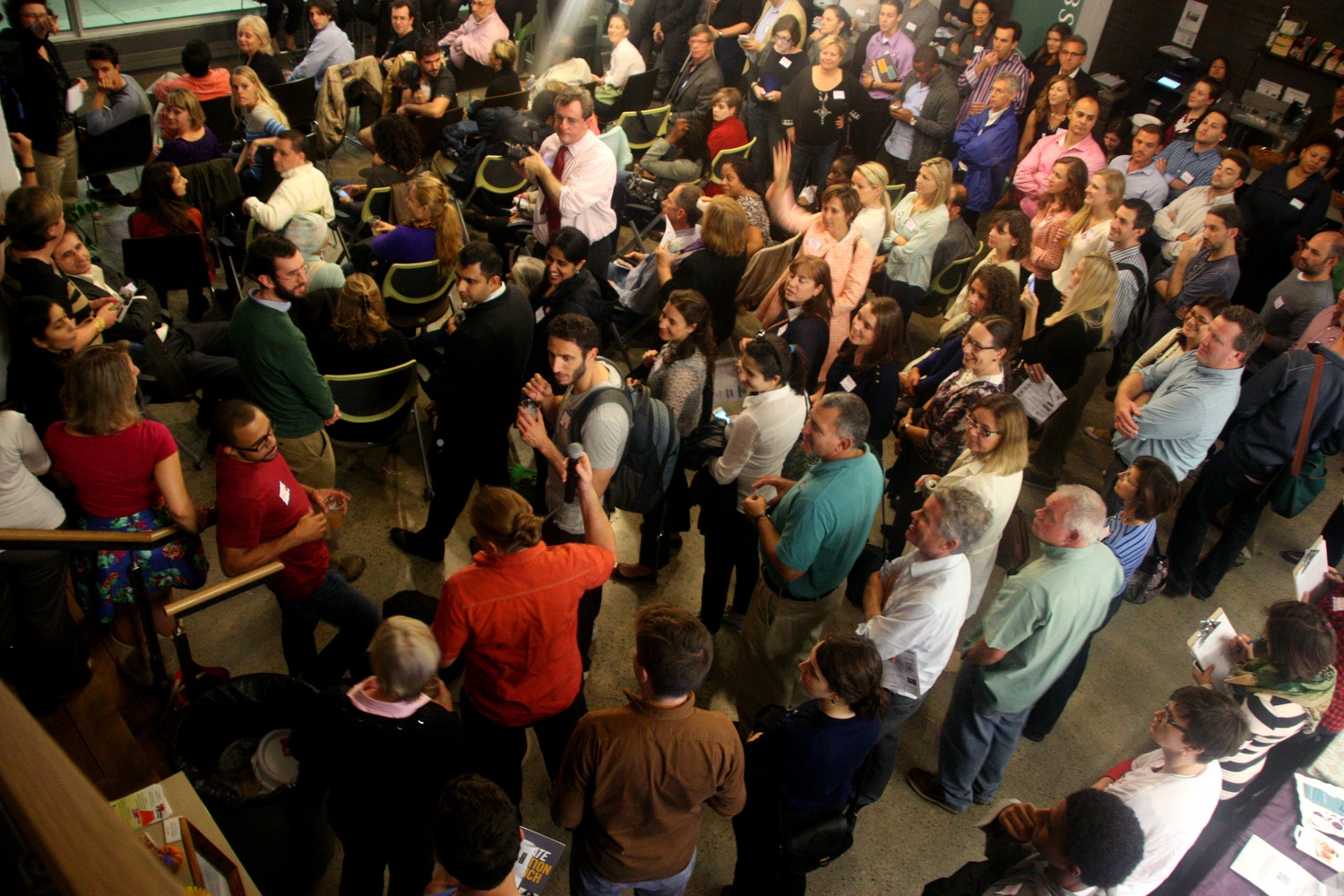 Needless to say, I came for the hedgehog.
By Ben G. Cort

I arrive early, which, judging from the crowd outside, is the thing to do. Peering in through the windows of Workbar, an space that feels like a hybrid office/cafe sitting just outside Central Square, I see entrepreneurs excitedly flitting around their booths and an army of folding chairs being deployed. Other than a sparse rumor or two about a hedgehog and a variety of companies, I know very little about Mass Innovation Night 67. Needless to say, I came for the hedgehog.

Immediately upon entering, I am handed a “Tweet Sheet” covered in QR barcodes and and ushered into an absolutely packed room where 10 local companies are showcasing their products.

I lower my shoulder and charge my way through the crowd to the first company, ReFleece, which is an “upcycling” organization. (Upcycling is a term I learned from the wall, upon which a live feed of Tweets with the hashtag “MIN67” is being displayed.) They take some of the 13 million tons of material wasted by clothes companies and turn them into thrifty bags, cases, and other accessories.

Companies are chosen for the Nights through a non selective process. If you’re on their list, they’ll give you a Night. They attempt to showcase two student startups a month, from different schools. The waiting list is currently five and a half months long.

In addition to Refleece, there’s On The Dot Books, a book sharing program for airports, Booze Époque, a craft cocktail catering company that describes themselves as “spirit alchemists,” and, up a staircase, the company I came for: Meet Eugene.

Meet Eugene is a student start-up that battles the problematic feeding of many hedgehog pets, a fact I learned while cradling their pet mascot, Eugene the hedgehog. Improper diets can lead to problems with obesity and cancer, shortening their average life span by three or four years. Perhaps it is the hedgehog, but I somehow coaxed into signing up for their email list.

I am also somehow coaxed into sampling a brand of organic dog food (dry, but tasty) as I make my way through the remainder of the companies. After a fifty-minute presentation, the least innovative part of the night, I am able to talk to Bobbie Carlton, the founder of the company.

The Innovation Nights were born five and a half years ago, when Carlton, out of a job after years of working marketing and global PR for software companies, found herself with too much free time on her hands.“

I don’t take well to boredom,” she tells me, in the midst of what seemed like half of the night’s attendee’s wanting to shake her hand (she is a big name in the Massachusetts Innovation Night Community).

For the first Innovation Night, Carlton sent out a blast on the then-young Twitter and wrangled ten companies and two hundred attendees. “This was never intended to be a monthly event,” she explains. “Everybody, as they were leaving that night was like ‘okay, we’ll be back next month, right?’ And I’m like, shoot.”

Now, the Nights provide a huge boost in visibility for the product launches they present. “Usually for those 30 days that we’re promoting them, we’re their biggest traffic driver,” notes Carlton. But it’s not all about the products; it’s also about the networking, and people are hungry to do it. I quickly lose count of the number of times I have to clarify that no, I do not have a company, and that no, we are not hiring.

The presentations wrap up, and the crowd disperses back to making friends and admiring products. The women from Orora Global, showcasing their affordable solar panel kit that they distribute among poor villages in India, come away having won a slew of American Airlines Business Points.

Schmoozed out for the night, I grab a complimentary sandwich for the road and slip out the door. I need something to get the taste of dog food out of my mouth.