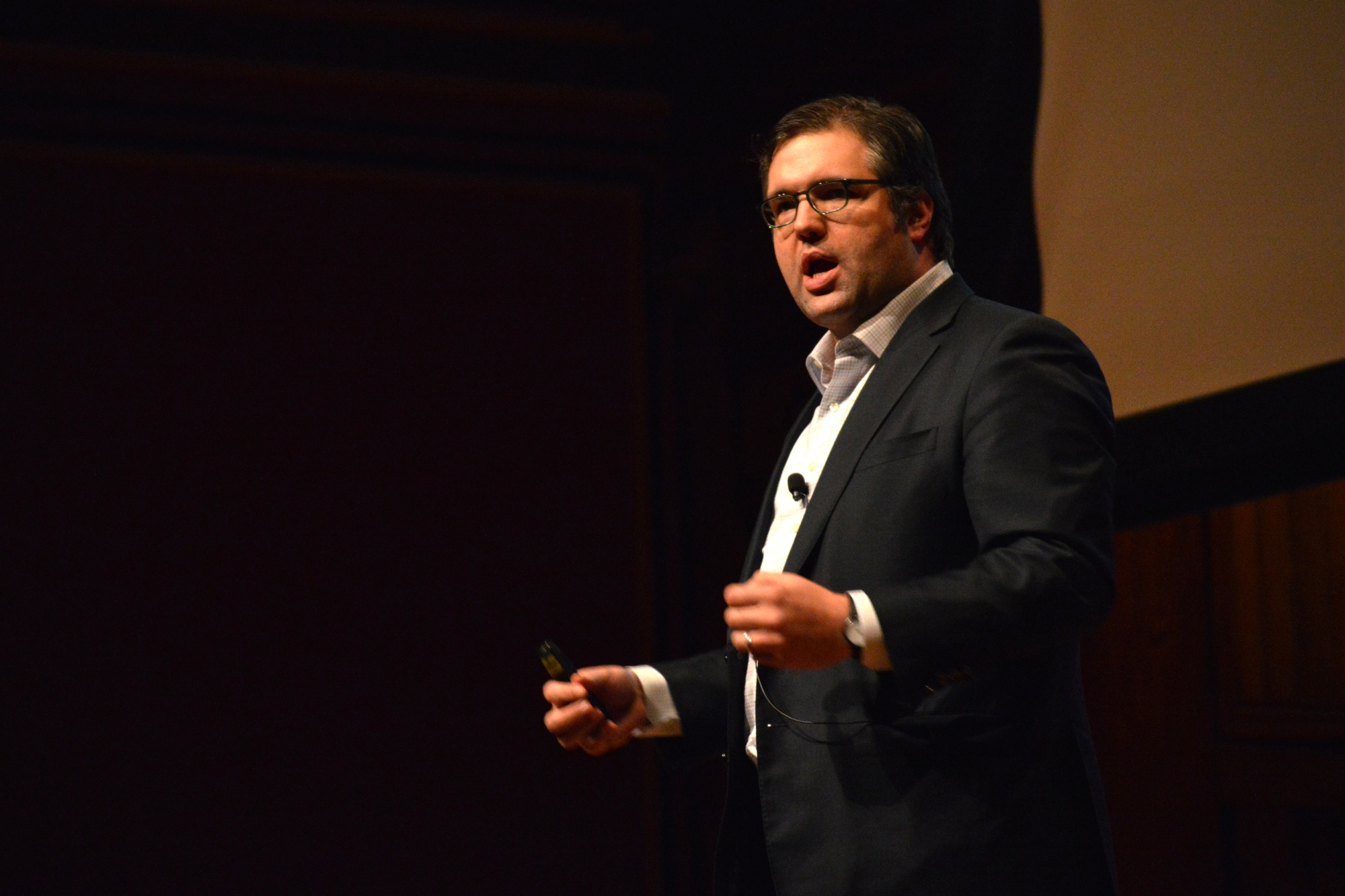 Nicco Mele speaks at the fifth annual rendition of Harvard Thinks Big on Wednesday evening. Six University professors spoke in the TED-styled event, with topics ranging from neurobiology to the implications of HarvardX.
Advertisement
Advertisement

My eyes are tearing up as I make my way up to the balcony seats in Sanders Theater. Not because I’m overly excited by the prospect of Harvard Thinks Big VI, but because it is cold as hell, and my eyes haven’t stopped watering since I stepped outside.
By Lena K. Felton

My eyes are tearing up as I make my way up to the balcony seats in Sanders Theater. Not because I’m overly excited by the prospect of Harvard Thinks Big VI, but because it is cold as hell, and my eyes haven’t stopped watering since I stepped outside. 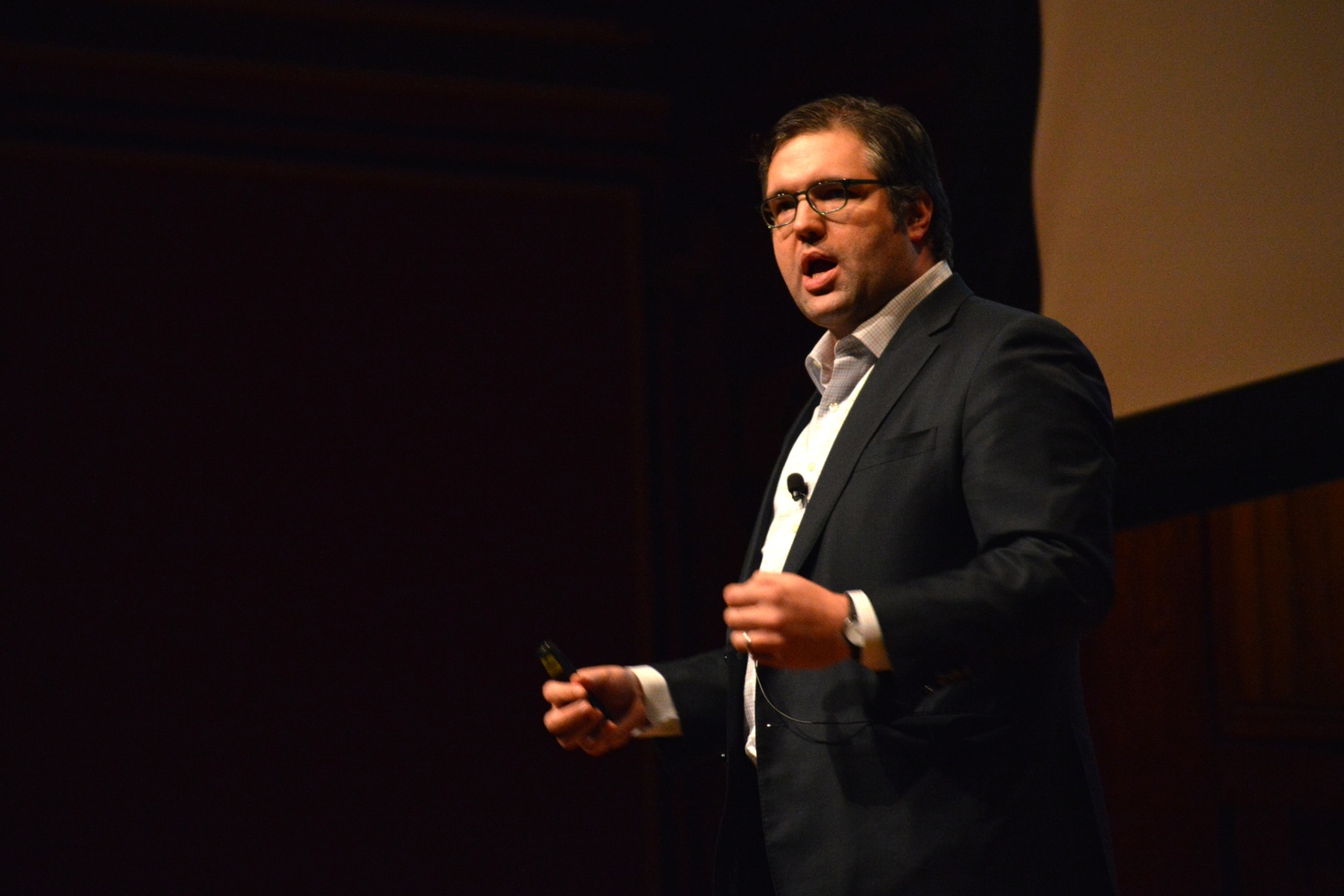 Sponsored by the College Events Board, Harvard Thinks Big is a TED-esque symposium during which several Harvard professors or students talk about a “big idea” for 10 minutes. I think I’m in the right place at the right time (Sanders on a Thursday at 7:50 p.m.)—there’s a big screen at the front with the logo—but there aren’t a ton of people here, like I was expecting. At least my fingers are beginning to thaw, and it’s entertaining if not a bit idiosyncratic that Ariana Grande is blasting from the speakers.

Soon, two student emcees take to the stage. They tell us that we are, in fact, here for the sixth Harvard Thinks Big—not Harvard Thinks Dirty. I let out a chuckle, put my phone on silent, and sit back, anticipating five scintillating, groundbreaking, mind-blowing big ideas (there were originally supposed to be seven speakers, but English professor Jamaica Kincaid has a sinus infection and music professor Ingrid Monson is helping Robin Thicke and Pharrell out with a lawsuit).
For those too lame to brave the cold, here’s a condensed version of those five pearls of wisdom.

Lewis talks about the role of practical learning at Harvard: where we’ve been, where we are, where we’re going. He shows us a few SEAS faculty members’ current projects, like  self-building robots and “material so slippery germs won’t stick to it.” The audience lets out a “woah” when a Robobee lands itself. It makes me feel more inadequate than ever.

Then, Lewis asserts that an applied science education is both formative and rewarding—you know, in equipping students for the real world. He shows us plans for the SEAS center in Allston, which looks like Northwest Labs on steroids. All of this makes it clear that applied science really is what we should be studying nowadays. Awesome that I declared English two months ago.

Applied Mathematics Professor Michael P. Brenner: “What is the difference between computer graphics and computer simulation?"

Unlike the other professors dressed in dark suits and shiny shoes, Brenner wears a cotton sweater and pants tucked into clunky snow boots, tongues both folded down. His casual approach becomes endearing early on, and he confides that he doesn’t really have a big idea; he just wants to complain to us about mathematical models for 10 minutes.

He shows us two videos: one of real fire, and one of animated fire, and the animation does look pretty legitimate. He explains that there’s a mathematical theory of fire, throws up some lengthy equations on the projector, and I mentally check out. Shortly afterwards he says, “I don’t know how long I’ve been going, but it feels like long enough,” thanks us, and leaves the stage.

Altringer doesn’t follow the 10 minute guideline; instead, she spends 20 minutes talking about herself. At one point, she flashes a bunch of her journal entries; she also talks about IDEO, a design and innovation consulting firm, a lot, which to her credit is the coolest company ever.
What Altringer explains is that she’s used her disparate interests to create a new model of business. Being able to flex different networks, she says, is the future of entrepreneurship. What I really learn is that boldface, capitalized type in pretty colors such as lime or cerulean make any presentation 10 times more professional.

This is my favorite presentation by far, mostly because I really am curious about extraterrestrial life, even if I don’t openly admit that. Charbonneau, who’s famous for his research on exoplanets, begins as if he’s  really giving a presentation in 2045. He tells the audience that by May 2015, we will find a planet similar to our own. Yes, that’s right: Charbonneau claims that we’re just months away from finding Earth-like planets out there in the great expanse. A pretty hefty claim to be making, but I like it. This is the kind of big idea I was looking for. 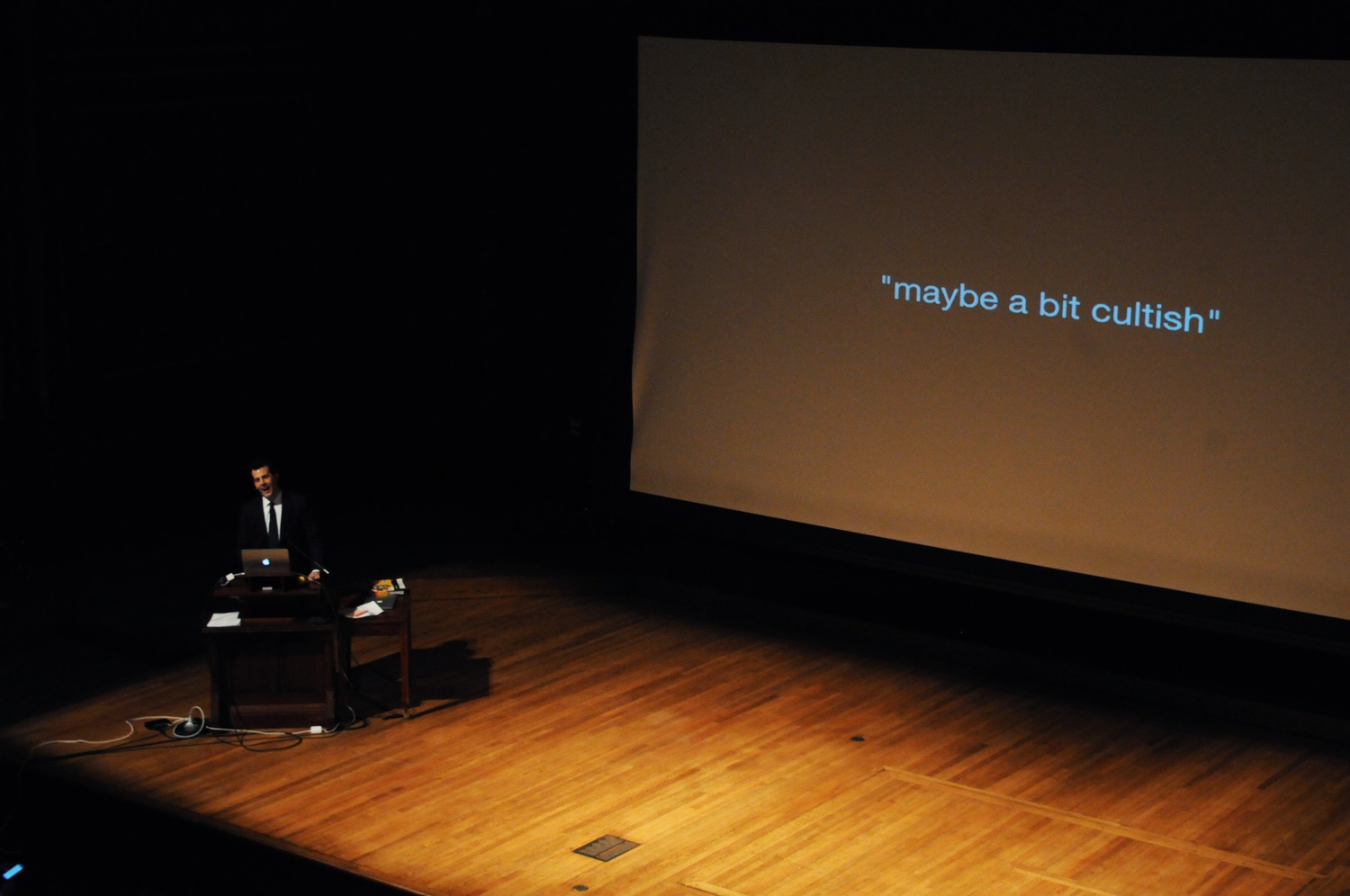 David J. Malan speaks about the cult-like culture of CS50. By Elizabeth Choi

Malan’s big idea is, basically, take CS50. I mean, his underlying idea is that we should be creating “class cultures,” and that this pedagogy is the key to future learning. As a result, the presentation feels like a condensed version of a shopping week class. At the very end, there’s a music video (high production value, of course) of students dancing and singing to a CS50 version of “Uptown Funk.” Enough said.