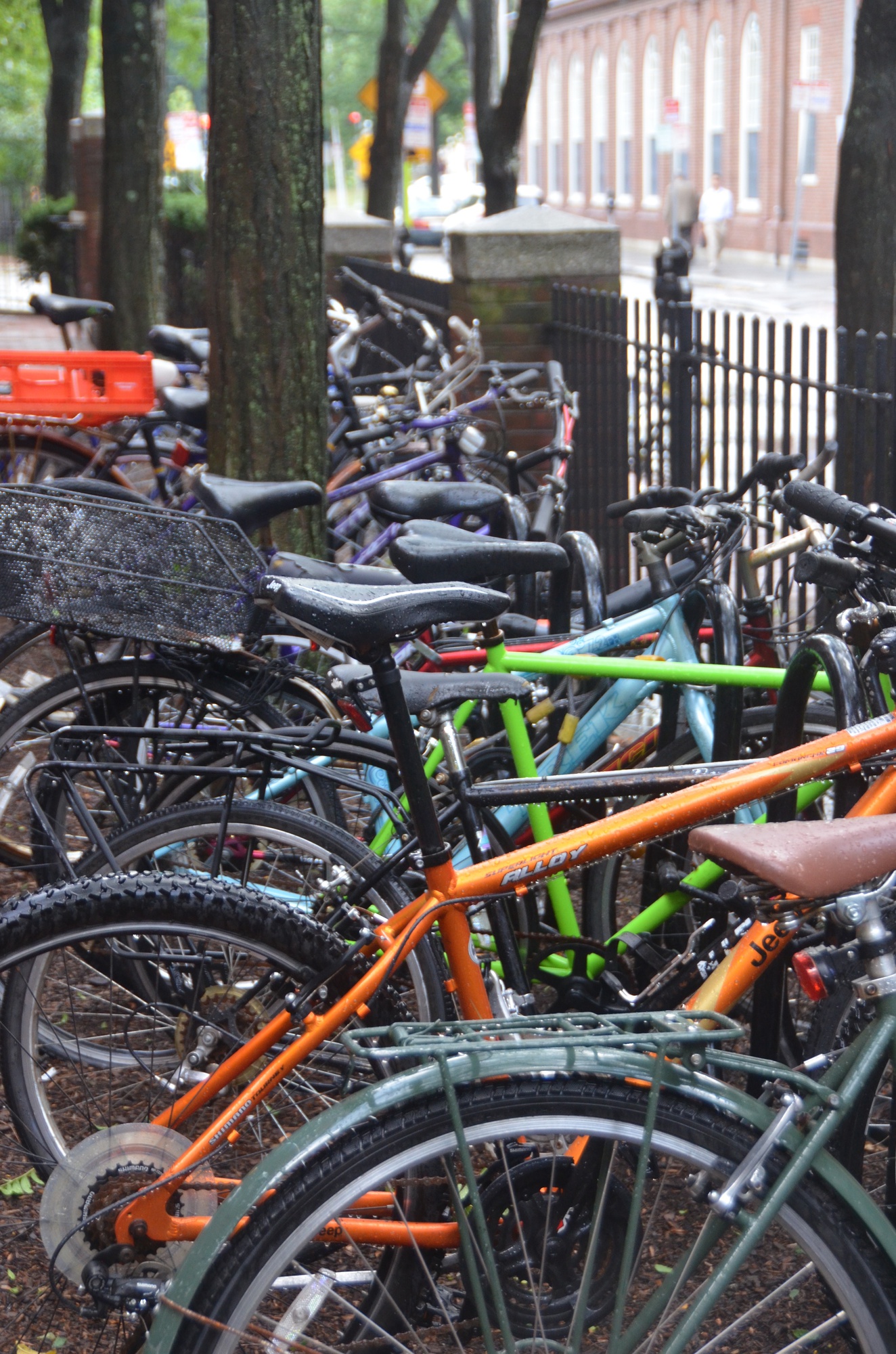 Rainwater glistens on bikes locked outside DeWolfe after a thunderstorm on Tuesday afternoon. The storm, which was described as "severe" on the Harvard Alert System, occurred from approximately 4:08 to 4:45 p.m. and included hail, thunder, and lightning.
Advertisement
Advertisement

Take 'Er for a Spin

What makes the Wheel so “super?” While you’re pedalling, the motor augments your speed, so attaining and maintaining high velocities is a piece of cake. The app controls how much juice the motor ouputs, and lets you keep track of battery life, speed, and distance travelled.
By Ben G. Cort

The Copenhagen Wheel is a futuristic product of the Cambridge-based company Superpedestrian. Born in MIT’s Senseable City Labs, the wheel was created as an entry for a competition run by the city of Copenhagen to encourage biking.

The Wheel can be retrofitted into an existing bicycle by adding a 17-pound red disk to the back wheel of an ordinary bike. Not only is it an interesting style statement; the disk also contains a motor, sensors, and a battery. It links up to an app created by Superpedestrian, called My Wheel.

What makes the Wheel so “super?” While you’re pedalling, the motor augments your speed, so attaining and maintaining high velocities is a piece of cake. The app controls how much juice the motor ouputs, and lets you keep track of battery life, speed, and distance travelled.

Superpedestrian is currently allowing anyone to rent one of their bikes, equipped with a Copenhagen Wheel, for test spins. For $15, I was given access to a bike from 10 a.m. to 6 p.m. It only took five minutes to get set up when I arrived at their headquarters, which are located southwest of MIT.

Starting to ride the bike from a standstill is shockingly easy. When the app is set to “turbo,” the motor immediately kicks in and starts helping you move the moment your feet engage the pedals. Used to a normal bike, I kicked off and pressed down hard, only to find myself already halfway down the street.

On “turbo,” the wheel is capable of accelerating the bike up to 20 mph. The motor could probably handle faster speeds, but then this “bike” would have to be officially classified as a motorcycle. As I lack a driver’s license of any kind, I was grateful for the speed cap.

Still, 20 mph is awfully fast. As I zipped through Cambridge, I found myself able to keep pace with cars on side streets, and rarely felt the need to pull over to allow one to pass. It felt as if some ethereal hand was holding me by the fender and steadily pushing me forward as I pedalled.

All of this power does come at a cost, though: In a half hour, I had drained about 20 percent of my battery life. I’ll pretend that this is the reason I pulled over to switch my motor’s output to “standard” on the app, but, truth be told, I was starting to get a little scared. Going fast is one thing—going fast over Cambridge’s pothole-happy streets is another.

On “standard,” my speed fell closer to the normal range of a bicycle, and I no longer felt like I was being literally pushed along by the motor. But I did notice that after another half hour of riding I hadn’t even broken a sweat, despite doing my best to go up and down as many challenging hills as possible. It almost felt like cheating. I suppose in many ways, it was.

The app also allows you to turn the wheel completely off. This turns your bike back into a normal bike, albeit with a 17-pound red weight attached. You can also switch to “exercise” mode, which makes the motor work against you. When riding in turbo or standard, you can charge the battery by pedalling backwards, like braking in a car.

The Copenhagen Wheel is currently on sale for preorder for $1,199. If you rent the bike for a day and fill out a survey, you’ll get a coupon for $50 off. Of course, it costs $15 to get this deal. $1,164 is still a little too price-y for this rider, but trying out the wheel is cheap and exciting. Cambridge has never felt so small from on top of a bicycle seat.