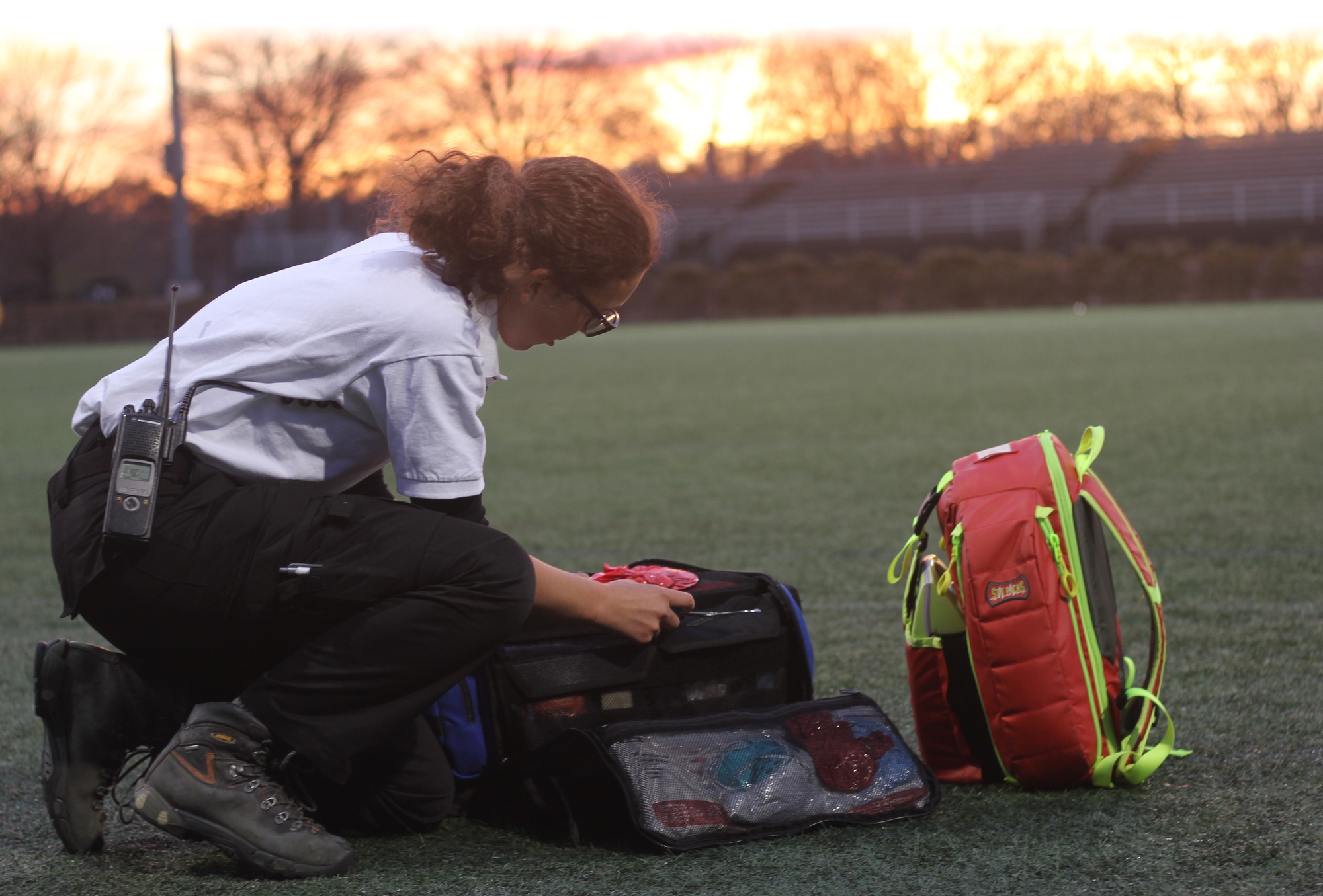 The 'What If': Crimson EMS

During the average week, the EMTs monitor between one and five intramural sports games per night and one or two parties per night on weekends.
By Annie M. Goldsmith

“I always wanted to be prepared for that ‘what if?’ situation. I wanted to be the guy that could walk up to the car crash and do something,” Evan R. Komorowski ’18, the operations chief of Crimson Emergency Medical Service (EMS), says.

He sits at a round table in the EMS “space,” a few large rooms on the sixth floor of the Smith Campus Center. Its walls display posters with CPR instructions, assorted flyers and informational handouts, as well as photographs of smiling student emergency medical technicians (EMTs). Next to him sits Lethu A. Ntshinga ’18, the chief of Crimson EMS, and Danielle A. Seda ’19, the service chief.

Founded five years ago, Crimson EMS trains student EMTs to monitor campus events big and small and act as liaisons between the University Police Department, the University Health Services, and students at the university. Each EMT goes through rigorous training and must complete service requirements to maintain their position.

During the average week, the EMTs monitor between one and five intramural sports games per night and one or two parties per night on weekends. “A large part of what we do is reassuring people that they’re safe here because we’re there,” Ntshinga says.

“Our role is also providing relief to students, in the sense that knowing there are skilled medical professionals here allows them to maybe enjoy themselves a little bit more,” Ntshinga says. “Even on nights when we don’t have patients, we still feel as though we’re serving a purpose.”

This sense of reassurance for the student body is not without sacrifices for the EMTs, who monitor parties and events “until people decide that the end of the party has come,” says Ntshinga. Komorowski and Seda exchange knowing glances, then nod. Clearly “the end of the party” is often quite flexible. Ntshinga says EMTs often bring homework along, as it’s not uncommon for a party shift to last up to five hours.

Even though the EMTs must stay on the sidelines, Ntshinga enjoys monitoring parties. “The shifts that we get to be on at night is the time when people are the most relaxed and the happiest and enjoying their college experiences the most.” Ntshinga says, smiling. She rests her hands on her closed laptop, decorated with a sticker that reads: “People Over PSets.”

Ntshinga likes to “watch my classmates have a great time and to see some of my friends—and see them when they’re not freaking out about a test or the project that’s due,” she explains. “Just taking a moment to take care of their social well-being.”

But serving as a collegiate EMT comes with unique challenges. “The issue is that your patients are your classmates. And that’s something you don’t get in a traditional 911 transporting service—you pick someone up and then you never see them again,” Komorowski explains. “Meanwhile, here, I have had people get very irate with me … and then 8 hours later I’m eating lunch two seats away from them in the dining hall.”

Despite these challenges, Komorowski says he appreciates the skills he has gained through his experience as an EMT. “When you find someone unconscious on the floor of a bathroom, a lot of people just panic,” he says. “But now, going through the training, you get the skillset to deal with that sort of emergency.”

The student EMTs also learn skills beyond medical response. “In EMS in general, there’s no room for self-doubt a lot of the time,” Ntshinga says. “You really need to look at yourself as the authority and trust in your own judgment.”