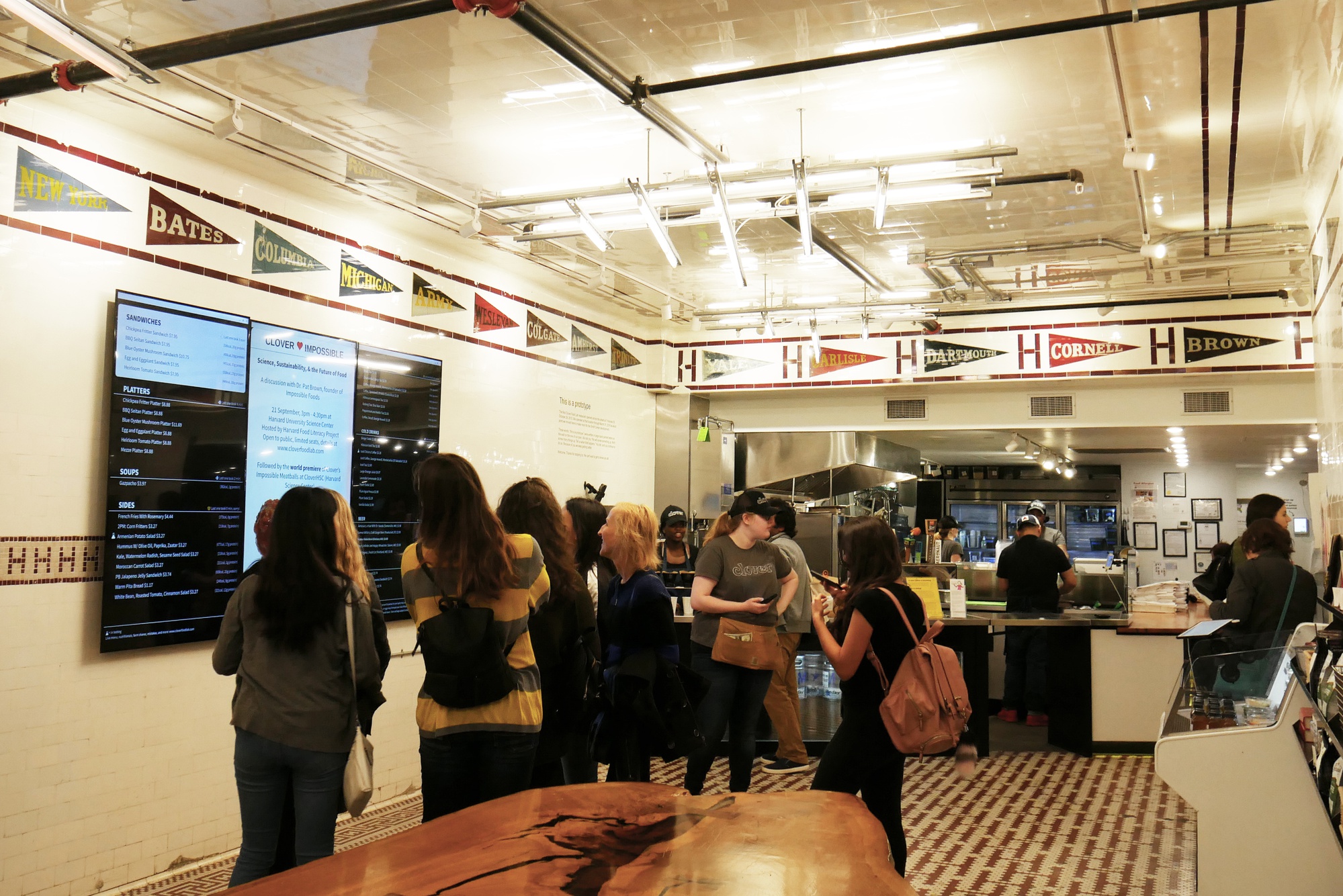 We Are Living in a Post-Sausage World

There was an obvious disconnect between the appearance of this fake sausage and the idea of a meat sausage — the signifer no longer corresponded to the signified. As it turns out, this was super unappetizing.
By Jensen E. Davis

I had never before seen a trademarked sandwich. But a few weeks ago, as I was walking past the Clover on Massachusetts Avenue, I noticed that the whiteboard outside the restaurant announced — in bolded letters — the arrival of their “Impossible™ Sausage, Egg + Cheese sandwich.” I paused.

According to Clover’s website, the restaurant has recently adopted Impossible™ Foods meat. Impossible™ Foods is a vegan food company that, as their website explains, “delivers all the flavor, aroma and beefiness of meat from cows,” except via vegetables. They mix together textured wheat protein, potato protein, coconut oil, something called heme, niacin, konjac gum, xanthan gum, and “natural flavors” into a vegan replacement for ground beef. Clover chefs shape this plant-based meat into faux-sausage patties and vegan meatballs. But I did not know any of this when I walked past the sign.

I haven’t had beef since I was 10 because I dislike the taste and sensation. My last memory of eating beef dates to dinner one night in the fifth grade. I remember trying to chew an overcooked chunk of steak but feeling like my jaw was too weak to rip the flesh. Although the cow was dead, it seemed like it was fighting against my jaw and somehow winning. By the time I finally broke down the chunk, it was already flavorless, drained of salt and blood. When I eventually chewed it down to a swallowable bite, I could feel my body’s difficulty integrating the foreign flesh with my own. I felt uncomfortably aware that the flesh I just ate would be slowly dissolved by stomach acids until it lined my arteries with pebbles of foreign fat.

But, as I stood outside Clover, I had to admit it: I was intrigued by the sandwich. I wondered how closely this substitute could mimic real meat. So, I walked into Clover around ten in the morning to order an “Impossible TM Sausage, Egg + Cheese” sandwich.
The restaurant was almost entirely empty. The cashier immediately me towards her as soon as I stepped inside. I ordered my sandwich by asking for “that impossible sandwich but without cheese.” Observing the way I stumbled over the word “impossible,” the cashier asked if I had ordered it before.

“No, I haven’t. Does it taste like actual meat?” I inquired.

“I think it depends on how much meat you eat.”

We stopped talking while she entered my order into an iPhone.

“What’s it even made of?” But, after asking the question out loud, I realized I had no desire to discover what was in the vegan sausage. “Actually, it’s okay. I don’t need to know.”

I assumed that, as is the case with regular meat products, the process of creating Meat™ would repulse me. Turning a full animal into a small geometric shape — a perfectly elongated cylindrical hot dog or a circular sausage patty — requires pulverizing and re-assembling flesh, which sounds totally unappetizing. Even though this wasn’t meat, I felt repulsed by the radically different shape my food would take.
It’s slightly unsettling that a vegetable (let’s say a potato) could, through some laborious process, be stripped of all qualities that help me identify it as a potato. The same goes for a cow. But I don’t find the conversion of cow to patty as distracting. The process of a cow becoming a sausage has been normalized to a point where I feel no need to question it. We even have a word for edible cow flesh: beef. Plus, I saw ground beef before I ever saw a real, whole cow, so it seemed natural that a cow should take the shape of ground flesh or a burger or a hot dog. But, I’m used to seeing full potatoes. A potato made to look like ground-beef forces me, more so than with actual beef, to imagine the process of totally bastardizing an identifiable potato to the point of total meat-looking obscurity. I do not associate vegetables with the sausage form.

After four-ish minutes, my breakfast was ready. I sat alone at a table for four and held my sandwich with both hands. Before eating, I looked at the egg and sausage, which were tucked into a whole wheat pita. I tried to determine if they were an egg and a sausage or an Egg™ and Sausage™.

The item is listed as “Impossible™ Sausage, Egg + Cheese sandwich.” So, I assumed that, due to the distributive property, the “Impossible™” applied to each food listed, not just to the sausage. I guessed that all three components were Impossible™ products, that each item consisted of a once-identifiable plant pulverized into mush and formed to look like an animal product.

I could tell the sausage patty was not meat but a middle-school-level production of meat. It was lumpy like a latke. I could spot various grains poking out. The sausage did not bleed like a once-living mammal. Instead, it was limp. There was an obvious disconnect between the appearance of this fake sausage and the idea of a meat sausage — the signifer no longer corresponded to the signified. As it turns out, this was super unappetizing.

The egg, however, looked like a real egg. To inspect it further, I squeezed the sandwich between my hands, breaking the egg white to reveal the yolk. The yolk burst out in a viscous, fondue-like drip. But the egg, now half-smashed and cracked open like a humpty-dumpty, looked too much like an egg to actually be real. The yolk was too yellow, the egg white too white. It looked a stock photo of a soft boiled egg. I decided the egg was probably fake.

Because I had already paid $8.64 for it, was fairly hungry, and planned to write this story, I took a bite. The sausage was salty, oily, and chewy. It matched the basic qualities of meat but somehow didn’t add up to the overall sensation and taste of real meat. It tasted like it had always been dead. But the egg tasted real. The yolk was cheesy and gooey and the egg white was rubbery.

As I continued to eat, taking big bites, I suddenly wondered: if I stopped eating meat because I was opposed to the idea and texture of meat, why I would want to eat fake meat? For this sausage to feel like a real sausage, to be a truly Impossibly™ convincing substitute, shouldn’t it elicit the same disgust and indulgence of actual red meat?

But the sausage didn’t taste like meat. I was enjoying it when I wasn’t inspecting the ingredients (or thinking about them). I could enjoy the different textures and tastes, the soft, warm bread and crisp fake sausage. It didn’t taste like the sandwich it looked like, but that’s why I enjoyed it. If it had tasted like fleshy, bloody beef, I would have thrown it away.

As I finished the sandwich, I looked around Clover. To my left there were large TVs with digital versions of menus. They informed me that the sandwich contained 381 calories and 23 grams of protein. I did not know the identity of the actual foods in my sandwich that a cook had smooshed into the shape of a different food. But I had the general nutritional outline of the sandwich, as if all I needed were the abstract qualities of my breakfast — the vague, crude outline of a meal.

The screens did not clarify the ingredients. So, only after finishing the meal, I looked through the Clover website on my phone to find the answer to the enduring question of my meal: was the egg real or fake? In the online description of the “Impossible™ Sausage, Egg + Cheese” sandwich, Clover explained, in bolded text, that their eggs are “local… laid days ago.” Apparently, the egg was real. I Googled a photo of the sandwich to recheck what the egg looked like, as if a picture of someone else’s pixelated version of what I just ate would somehow recover my own tangible meal. I couldn’t find a picture online.

Instead of the real egg making the fake sausage taste or feel like actual sausage, the fake sausage made the real egg seem fake. Sausage was no longer sausage but ambiguous vegetables stripped of all vegetable-identifying qualities and then congealed into an approximate image of a meat patty. It wasn’t a sausage but a post-sausage patty. The disconnect between my food and the image of my food didn’t convince me vegetables were meat but made me question the authenticity of all the food in my sandwich.

I was outraged. The Clover website did not simply inform me that the egg was real: they tried to convince me it was real by alluding to the actual, live chicken it came from. They invoked the image of a real, identifiable chicken shooting my egg out of its cloaca to legitimize the egg. So, I believed it.

Honestly, if the Clover website had listed the egg as an Impossible™ food product, I probably would have believed that, too. My sandwich could have been made of almost anything.

I left Clover and headed to class. While sitting in my 150-person lecture, my stomach started to feel bizarre. It growled, as if angry with what I had fed it. But I didn’t feel the kind of gross that meat used to make me feel. My stomach didn’t feel heavy with blood and flesh, but it also didn’t feel light, like I had merely consumed a couple vegetables.

My stomach continued to make digestion noises for the rest of the lecture. I tried to place the feeling in a mental schema of my stomach sensations. But I couldn’t identify what my stomach felt like.

— Magazine writer Jensen E. Davis can be reached at jensen.davis@thecrimson.com. Follow her on Twitter @jensendavis12. This is the third installment of her column, What Are You Lifting?, which explores different ideas and approaches to health in and around campus.