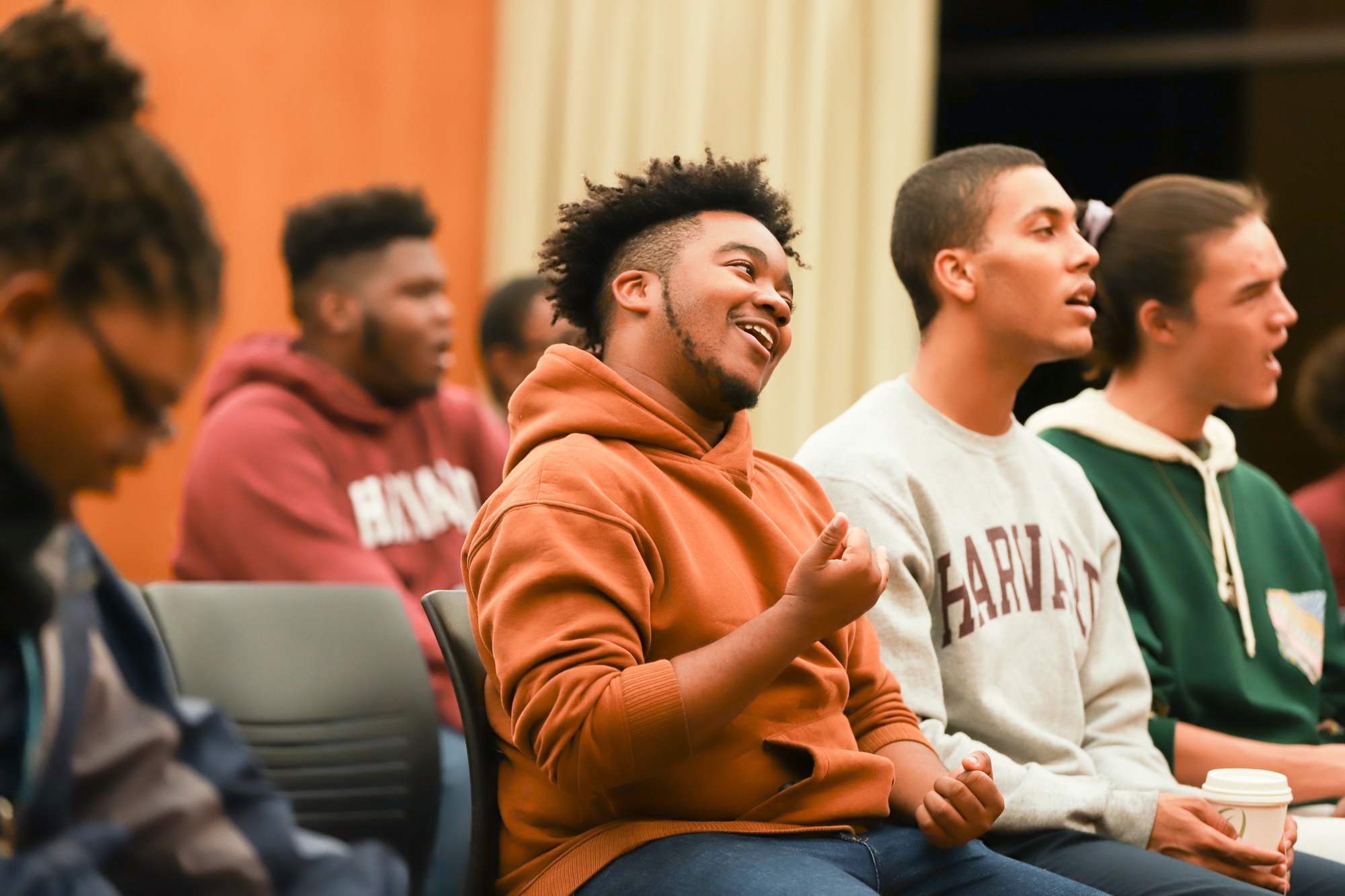 50 Years of Lifting Every Voice

Kuumba, founded in 1970 by students Dennis W. Wiley ’72 and Fred A. Lucas ’72, is a black choral organization and community for fostering black creativity and spirituality at Harvard.
By Roey L. Leonardi and Harrison R. T. Ward

Their 7 p.m. rehearsal start time has come and gone, but the Kuumba Singers of Harvard College stand in clusters, talking and laughing with one another, a few students tapping out melodies on the piano. There’s an informality in their interactions that can only be described as familial. Director Sheldon K. X. Reid ’96 finally calls the group to order, beginning with a moment of silence and encouraging the members to reflect on what they hope to take away from the evening and what they hope to give.

Kuumba, founded in 1970 by students Dennis W. Wiley ’72 and Fred A. Lucas ’72, is a black choral organization and community for fostering black creativity and spirituality at Harvard. The name Kuumba, is derived from the Swahlli word “to create,” chosen to signify the group’s commitment to the creation of community and celebration of black art.

Kuumba’s founding, two years after the assassination of Dr. Martin Luther King Jr. and a year after students stormed and occupied University Hall, came at a time of intense political division. The existence of a “singularly black space on campus” as Asa P. Coleman ’22, Kuumba’s librarian, says, was itself inherently radical.

The first time Kuumba performed in Sanders Theater, in May 1971, the singers covered the eyes of the statues of the white men looking down on them. “I think that it took that level of radicalism to take up space at Harvard,” Coleman explains. 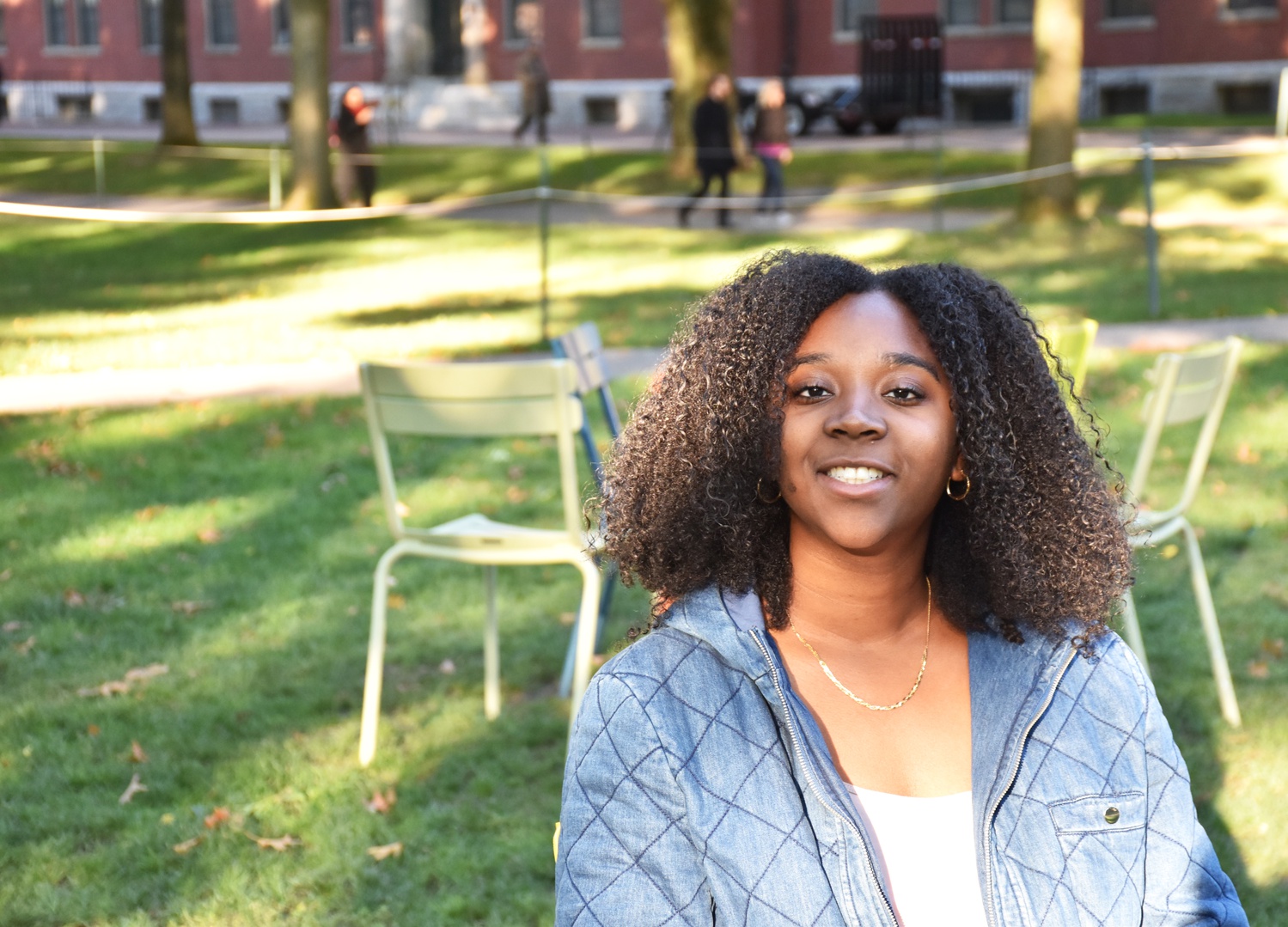 Asa P. Coleman '22 is the librarian for the Kuumba Singers of Harvard College, which celebrates its 50th anniversary this year. By Felicia Y. Ho

Jade O. Woods ’22, the 50th Anniversary Co-Chair, underscores the choir’s commitment to activism, which she says remains “vibrant” today, citing climate change and affirmative action as contemporary areas of advocacy. For example, last semester Kuumba sang at Harvard Heat Week, a series of events created to raise awareness of the climate crisis and to call for fossil fuel divestment.

Over the past 50 years, Kuumba has evolved from its original status as an all-black space on campus but has not strayed from its mission to be a nexus of black spirituality and creativity. Kuumba has incorporated more voices from a variety of racial and ethnic backgrounds, while also diversifying “what it means to be black at Harvard,” Reid says. Woods adds that each member represents “a different way that blackness can be expressed and celebrated.” Kuumba includes members from all over the world, including the Caribbean, Nigeria, and Louisiana. As Harvard’s black student body shifts away from the “monolithic” make-up of the 70s, Coleman says that Kuumba has equipped itself to incorporate “as many facets of blackness as we can” and integrate those experiences into their performances and community culture.

The Kuumba singers frequently perform “Lift Ev’ry Voice and Sing,” which is widely considered ‘The Black National Anthem.” “It doesn't say lift every black voice, it doesn’t say lift only black voices — it's all of the voices coming together to empower that creativity,” Coleman said. 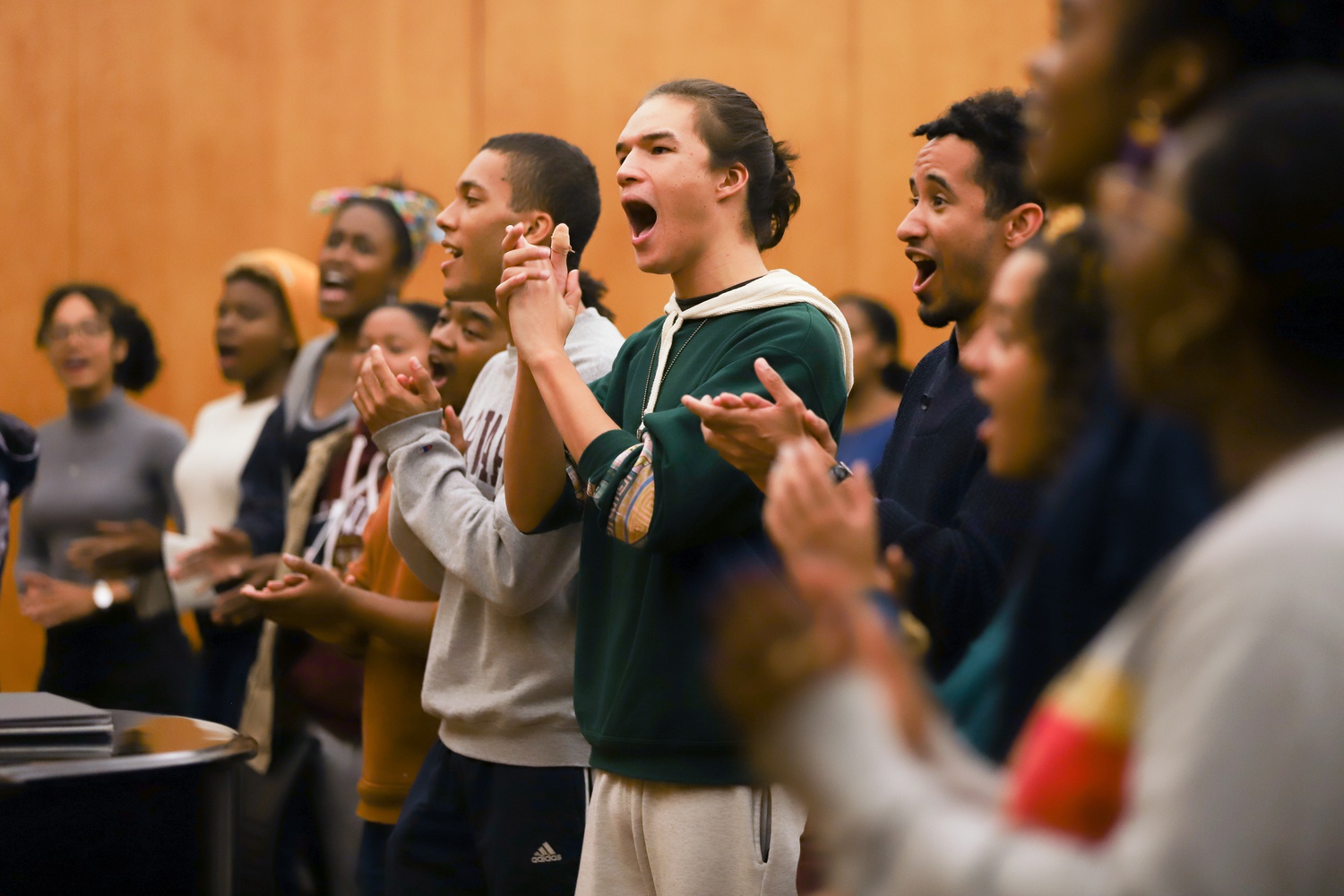 The Kuumba Singers of Harvard College clap and sing during a weekly rehearsal. Founded in 1970, Kuumba, the oldest existing Black organization at Harvard College, will celebrate its 50th anniversary this year. By Amanda Y. Su
Advertisement

Fifty years from now, Director Reid expects Kuumba to be “a space that celebrates black creativity and spirituality… 50 years from now that diversity will continue to grow and expand and that mission will be the same.”

Woods says this year will be an especially busy one, with a large focus on community outreach and increased interaction with Kuumba’s extensive alumni network. In fact, the weekend of the group’s spring concert will celebrate the last 50 years alongside Kuumba alumni. Reid says that graduates often tell him that while the choir might look unfamiliar as time passes, they have only to “stand at rehearsal and it feels like home.”

Kuumba’s existence over the last 50 years is “a testament to how important what we do is, how important uplifting black art is, how important community and joy are,” says Director of Publicity, Ije Okereke ‘22. In its first half century, it moved from a group of undergraduates struggling to create a space for blackness on campus to a storied Harvard institution that will continue over the next 50 years to lift every voice, and sing.