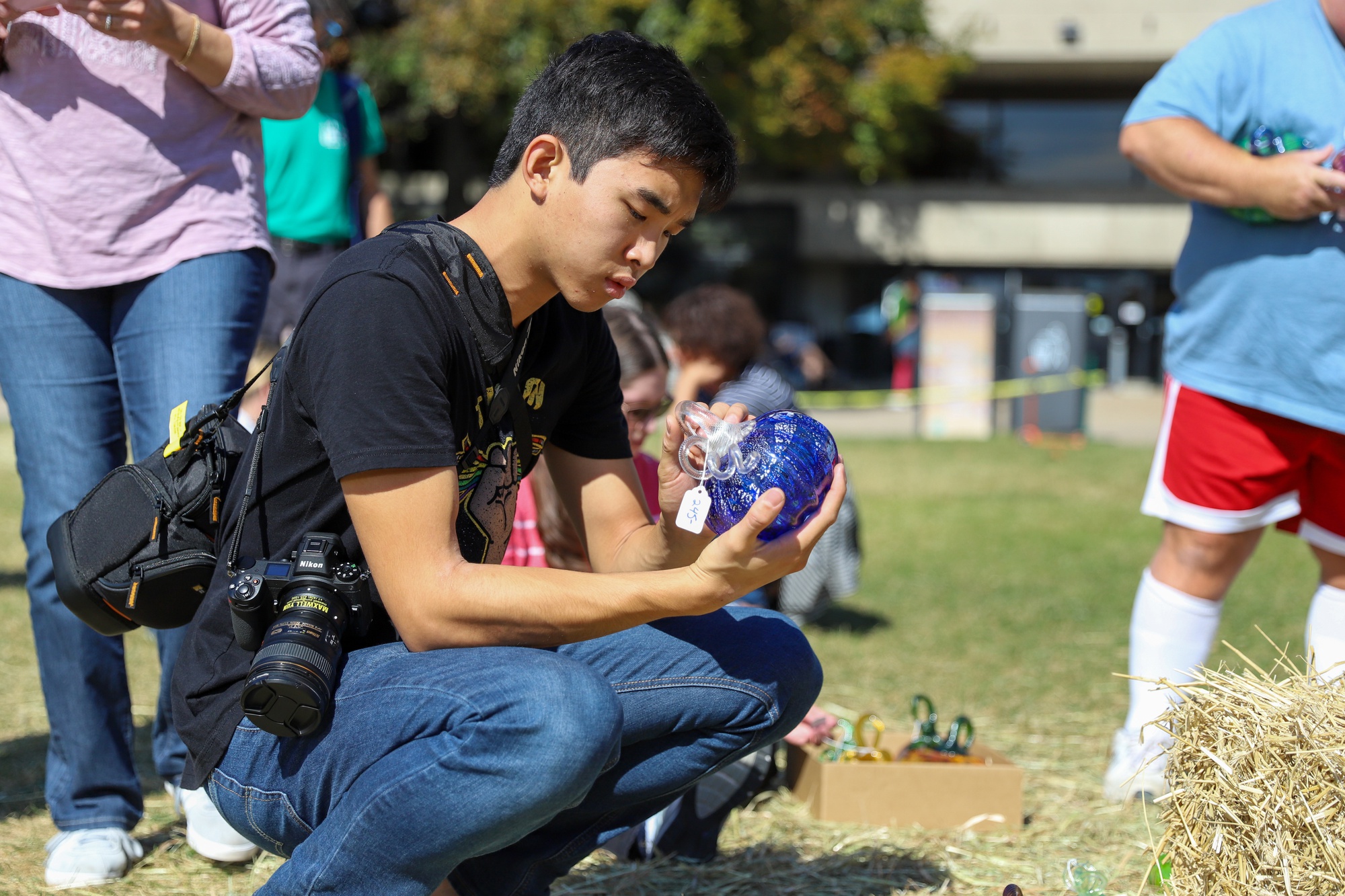 This isn’t your typical pumpkin patch — an 85 dollar price tag hangs off of the child’s apple-sized discovery.
By Maya S. Bhagat

“No running, no hoarding of pumpkins, please do not pick up pumpkins by their stems…” a sign commands at the entrance to the MIT’s Kresge Oval yard. A child loops two fingers precariously through the vines of a miniature pumpkin and runs over to their mother.

This isn’t your typical pumpkin patch — an 85 dollar price tag hangs off of the child’s apple-sized discovery. Contrary to the muddy gourds one expects from a usual pumpkin patch, this sale reveals a menagerie of pristine glass pumpkins sparkling in the sunlight. Hues of blood red, sea green, and deep midnight blue stripe and speckle the different pumpkins. No two look alike.

You can find these intricately designed gourds at the annual MIT Great Glass Pumpkin Patch. Every September, the MIT Glass Lab sells more than 2,000 hand-blown glass pumpkins crafted by affiliated students and faculty members who work year-round to create the glass works. The pumpkins, priced between $35 and $335, provide the primary revenue that funds the Glass Lab. 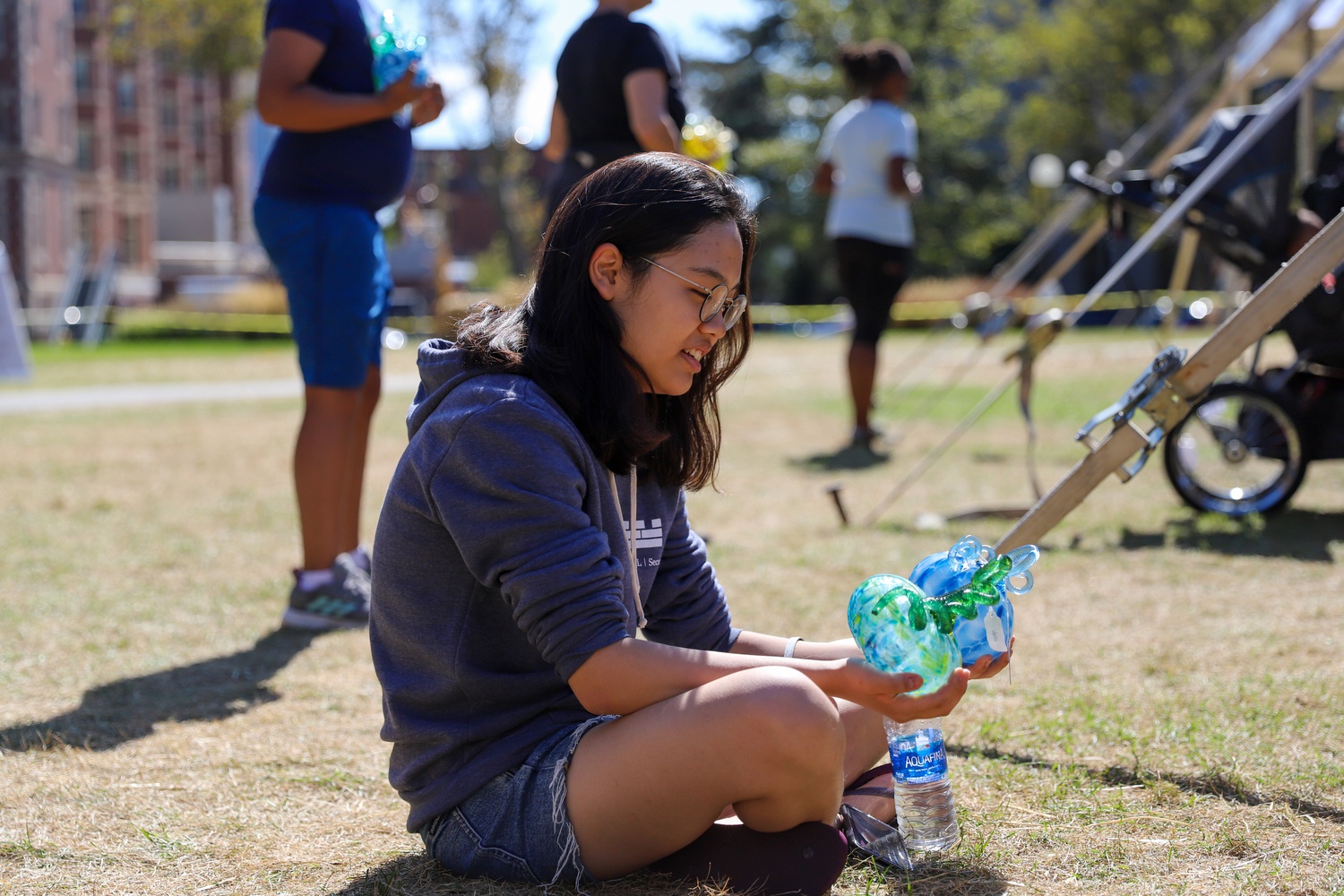 MIT first-year Shelley Choi struggles to decide which pumpkin she should purchase from the festival. By Ryan N. Gajarawala

Blowing glass is an opportunity for MIT students and faculty to indulge their creative impulses. As Professor Peter B. Houk, Artistic Director of the W. David Kingery Ceramics and Glass Lab, says, “What fascinates me is the intersection of artistic and engineering science approaches taken [in the design of the pumpkins].”

Professor Houk, who has led the Glass Lab since 1997, is intrigued by the variety of people who visit the sale. “At the beginning, we thought it would just be MIT, but the Boston community is really involved,” he says. At this year’s sale, a couple from Arkansas reportedly made an appearance. “It’s interesting to watch people come and engage — some of them even hoard [pumpkins],” he says with a chuckle.

Two freshman girls look conflicted next to a speckled orange pumpkin, a sky-blue pumpkin, and a pumpkin colored Granny Smith apple green. “We can’t decide,” one girl laments, looking around with frustration at what she deemed the “elite Bostonians” — those who can afford to buy multiple pieces. “I think the black spots detract from the look, it makes it look like the pumpkins have fungus,” her friend says. They decide to buy the cheapest one — the $60 orange pumpkin. 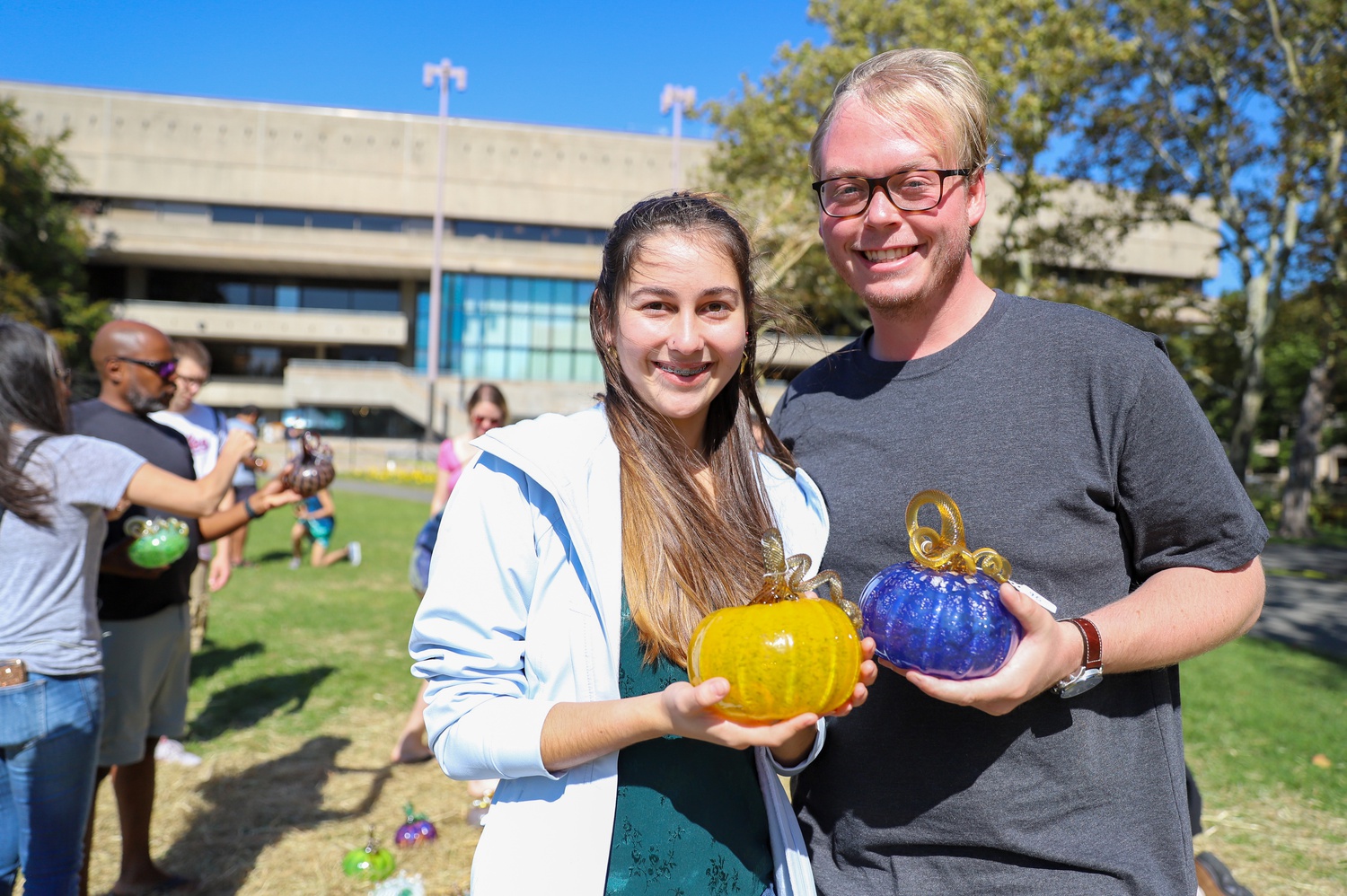 William B. Dahl and Melina P. Torres, PhD students of Molecular and Cellular Biology at Brandeis University, attended the event for the first time. By Ryan N. Gajarawala

Dr. Whitney Cornforth, a Glass Lab instructor, explains that the steep prices reflect the time and experience necessary to make each piece. “Some of the more expensive ones are not necessarily the largest, but they have really interesting color patterns which are very time-intensive to make,” he points out.

Despite these lofty price tags, Cambridge and Boston residents are enthusiastic about the decorative pumpkins. “I haven’t seen any other teal pumpkins, so we have to have this one,” an elderly man declares to his wife. His wife is already carrying five glass gourds and attracting the nervous glare of an employee, who soon rushes over with a basket. The pumpkins are hollow, surprisingly light, and very fragile.

Another couple argues over how to divide the pumpkins between their respective Woburn and Somerville residences. “I have to position them strategically in the house so that my cats can’t jump on them,” the woman explains to me. “We stumbled across this event on Facebook a couple years ago, but we have come every year since. It’s truly unusual, and the pumpkins are just so unique and gorgeous.”

—Magazine writer Maya S. Bhagat can be reached at maya.bhagat@thecrimson.com.