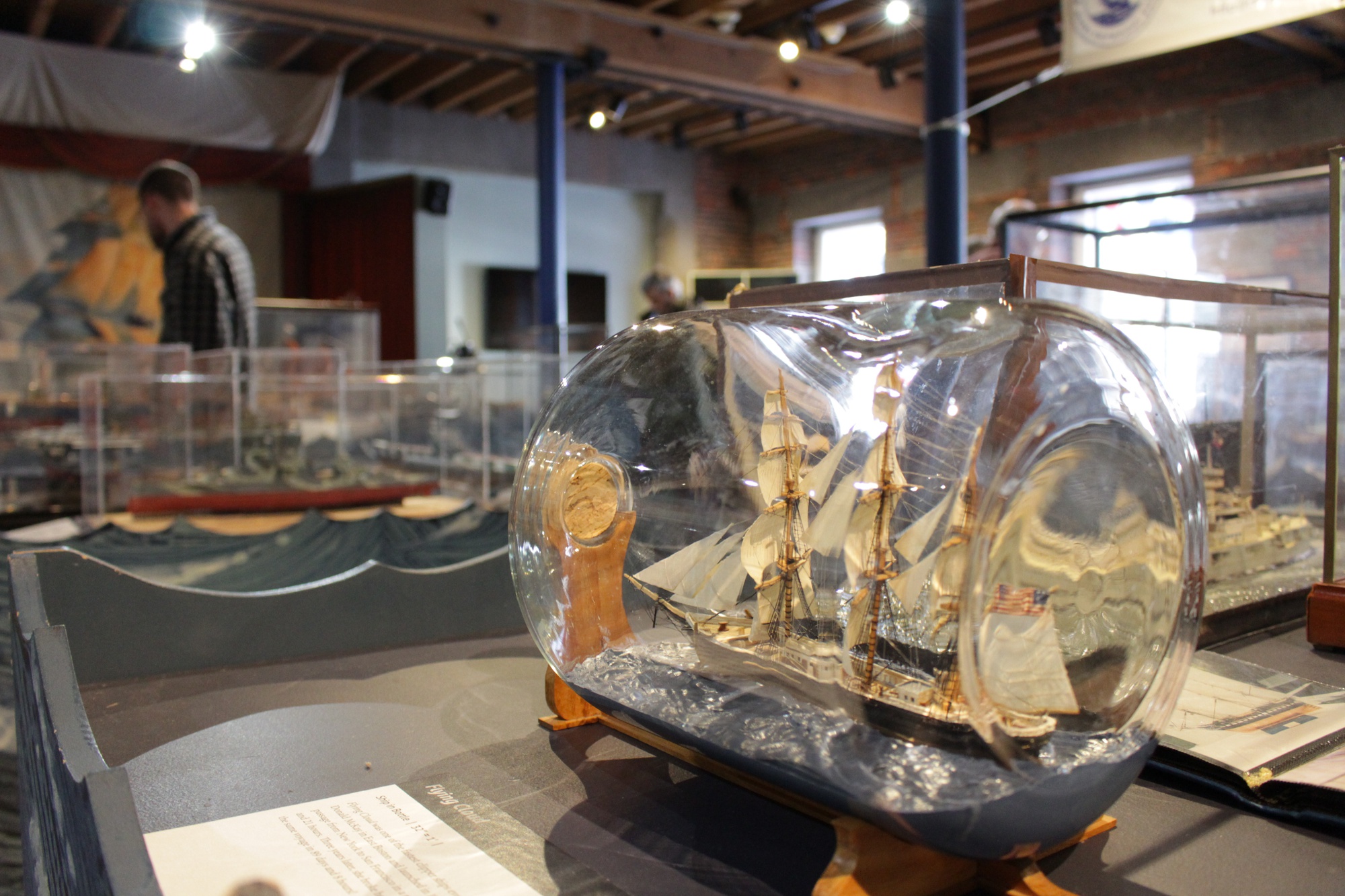 A model of the Flying Cloud, one of the fastest clipper ships ever, is presented at a model ship show at the U.S.S. Constitution Museum in Boston
Advertisement
Advertisement

Sailing Back In Time

Love is a necessary criterion for model ship building, considering the arduous, intensive process required. Love — a lot of it — is the driving motivation of these loyal hobbyists.
By Kainoa S. K. Lowman and Elyse D. Pham

The Charlestown Navy Yard stands still on a frigid March morning. Heavy snow swallows the wheels of parked cars and muffles the footsteps of a few workmen trudging along in Carhartt outerwear. Rusted cranes loom over the yard like arcade claws –– they seem to have been waiting hundreds of years to snatch up cargo. Docked in the waters beneath them is the USS Constitution, a proud, wooden-hulled battleship preserved since the 19th century, when it became known as “Old Ironsides” during the War of 1812.

Past the ship and across the Charles River stand TD Garden, various skyscrapers, and modern, functional cranes that build the city up so it can stare down on its past. The Charlestown Navy Yard defies these surroundings, this era, and even time itself. In a city full of movement toward the modern, the yard is a sanctuary of brick, wood, and rusty steel.

This anachronism serves as a perfect home for the USS Constitution Model Shipwright Guild, whose 90-or-so members gather on the first Tuesday of each month at the USS Constitution Museum. At the meetings, model ship-makers — labelled either apprentices, journeymen, or masters — show-and-tell their projects, which have consumed immeasurable amounts of their time, energy, and resources. Members are professionals and hobbyists alike, and they come from as far as Argentina and Germany. Transcending career and geography, members are unified by their graying hair and love of a dying art. Sometimes, the Guild features guest speakers; other times, it holds a fundraising auction among its members. This year, the Guild is celebrating its 40th anniversary with “Masters of Miniature: the 40th Annual Model Ship Show,” open to the public until March 23 at the USS Constitution Museum. 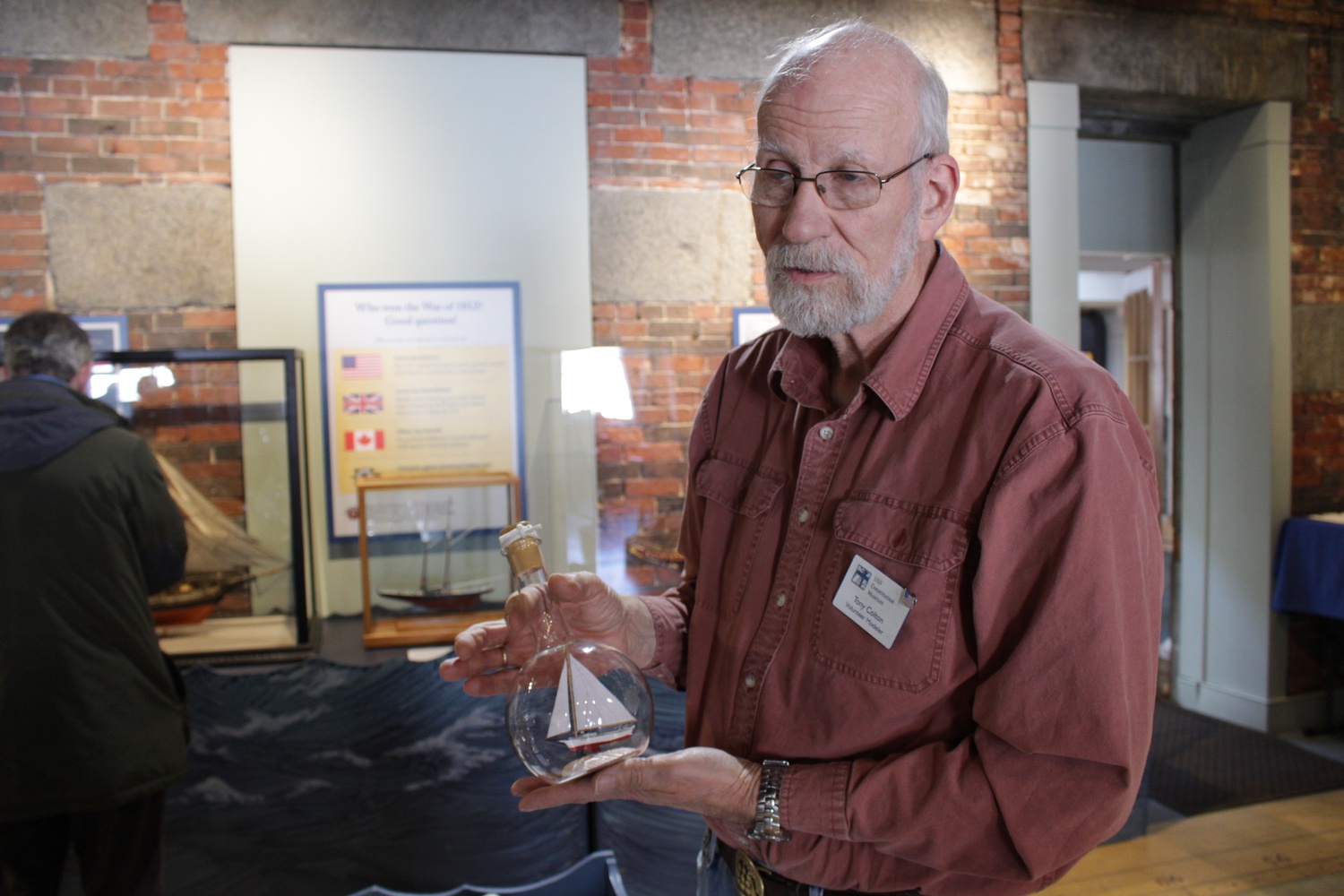 Anthony J. Colton showcases his model ship in a bottle of the Carrie Price, a boat from Maryland in 1897, at the Masters of Miniature: 40th Annual Model Ship Show. By Ryan N. Gajarawala

The show invites the average, non-ship-making-connoisseur into the world of the Model Shipwright Guild. Dozens of scaled-down ships are regally displayed with their sails unfurled in one of the museum’s rooms. They range from modest ship-in-a-bottle creations to imposing vessels that swallow an entire table. Every model is immaculately detailed and exhaustively researched. Modelers often find original plans for the vessels they imitate, meaning every miniscule cannon, railing, and dinghy likely has a supersized twin at sea, or once did. Guildsmen flit between the models, hovering over them affectionately and offering their abundant knowledge to visitors.

Glenn A. Kalimon, who has been a guild member for the past nine years and was recently named a master, has three ships of his own at the show. One of them is the Helen B. Thomas, a fishing schooner unique for its lack of a “bowsprit,” or the traditional stick jutting out from the front of the boat. Another is a stone sloop, specially designed to haul granite blocks; the third is a yacht owned by a personal friend. He explains that when choosing his models, he looks for something unique. “And it’s got to be something I can fall in love with,” he says.

Love is a necessary criterion for model ship building, considering the arduous, intensive process required. Love — a lot of it — is the driving motivation of these loyal hobbyists. 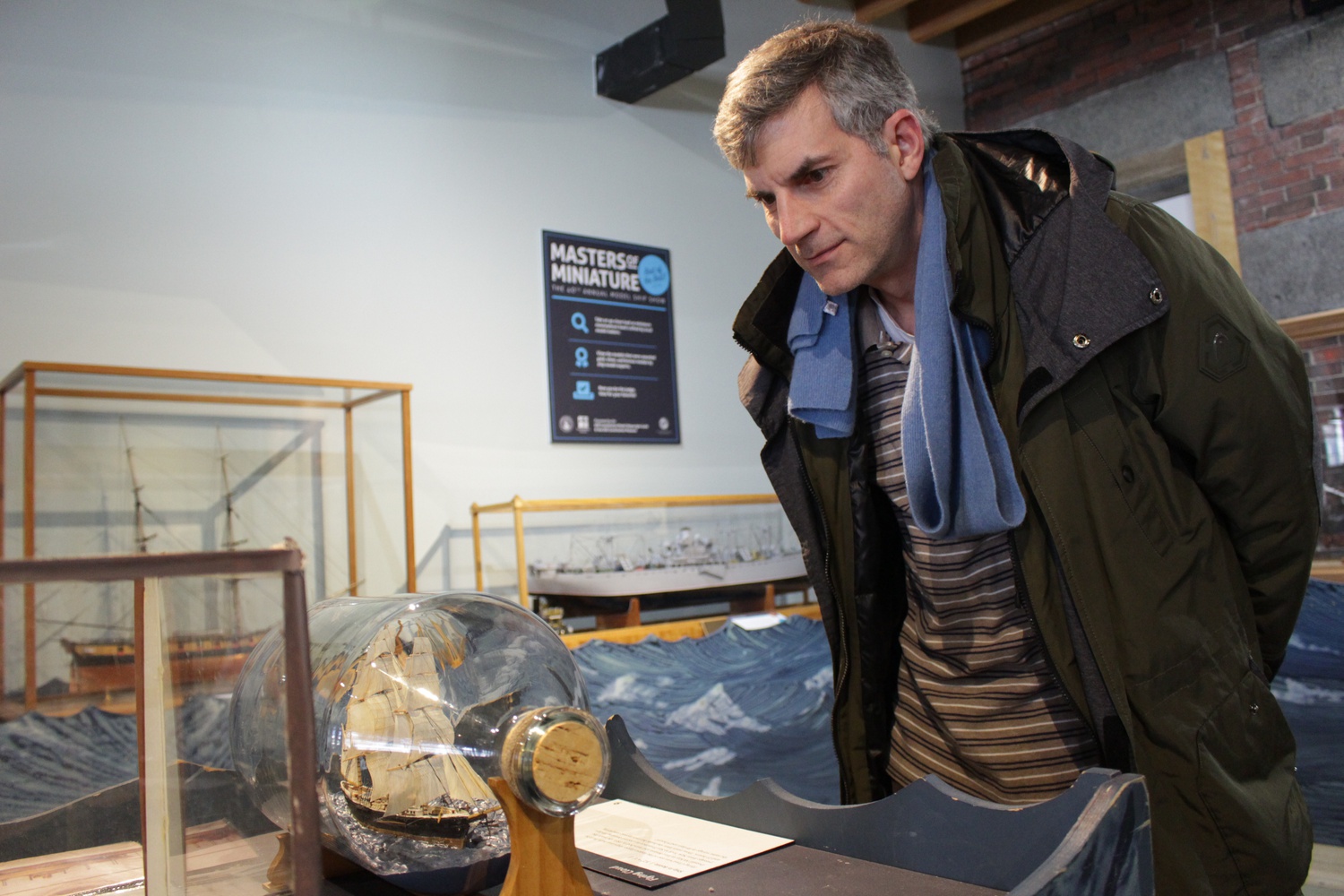 A model of the Flying Cloud, one of the fastest clipper ships ever, is presented at a model ship show at the U.S.S. Constitution Museum in Boston. By Ryan N. Gajarawala

Larry A. Ward, age 78, of Scituate, Mass., can attest to that. He spent a year building his model of the Steel Traveler, a cargo ship on which he himself served as chief engineer during the Vietnam War. The model is beautiful and exact; when asked how big the real Steel Traveler is, Ward responds without hesitation: “498 feet long.”

Ward’s masterwork is a model of the USS Constitution itself, which boasts fully functional rigging and 30,000 tiny copper plates on its hull. The White House wanted to display it in the Navy Mess restaurant, an immeasurable honor to be sure. But Ward wasn’t ready to hand over his labor of love. His idea: “How ‘bout I loan it to them?”

He took it back after just two years. “It’s a little piece of me,” he explains.

When you exit the museum, the hulking, real-life USS Constitution itself floats before you. It looks exactly like Ward’s.