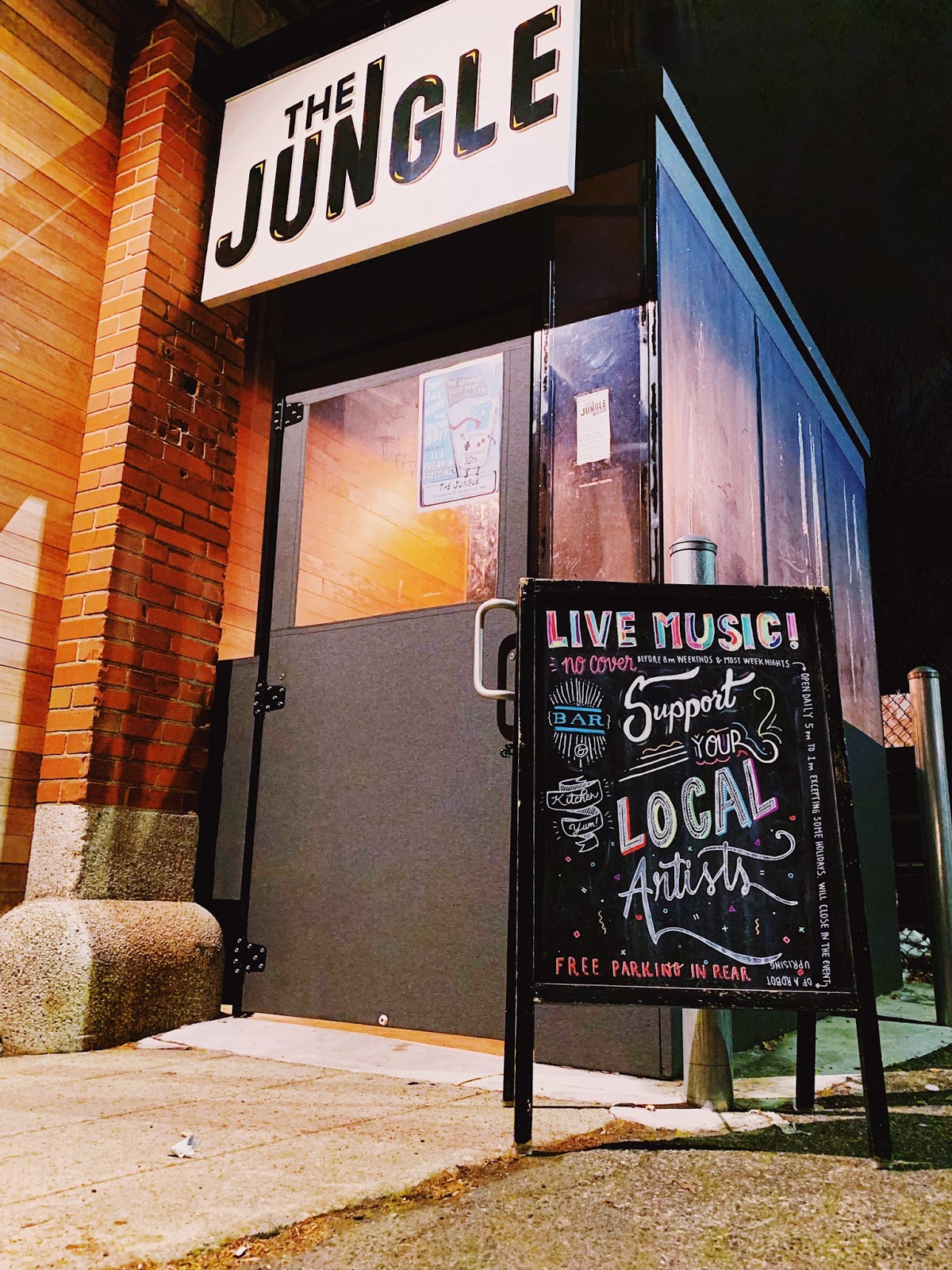 Musicians who played at The Jungle before the pandemic describe the club as a small, grungy hole in the wall.
Advertisement
Advertisement

"Let Musicians Work Outside for 1 Month Before the Long Winter"

On the website of The Jungle Music Club, a live music venue in Somerville, Mass., is a petition written by owner and co-manager Sam J. Epstein. “Let musicians work outside for 1 month before the long winter,” it reads.
By Dannie C. Bell and Meimei Xu

On the website of The Jungle Music Club, a live music venue in Somerville, Mass., is a petition written by owner and co-manager Sam J. Epstein. “Let musicians work outside for 1 month before the long winter,” it reads. Headed by a black-and-white photo of Black rockstar and “father of rock and roll” Chuck Berry, the page compares two scenarios. The first is the 1956 ban on rock and roll, implemented by many cities in fear of “uncontrollable” crowds reacting to the “provocative rhythms of an all [Black] band.” The second is the 2020 Somerville ban on live outdoor music during the pandemic.

Musicians who played at The Jungle before the pandemic describe the club as a hole in the wall with a high stage that allows them to perform surrounded by their fans. “It looks like a really cool basement,” says singer-songwriter Eva I. Davenport, a frequent performer and booking agent for the venue.

Now, no one performs in the club — save the musicians who live stream from the venue.

“We do not believe this decision was made with racist intentions,” the petition reads. It acknowledges that after seeing the large number of Black performers at The Jungle, Somerville has provided “an incredible amount of support” to help keep the club open during the pandemic.

Nonetheless, Epstein believes that the ban on live outdoor music does not make the city safer. “It is unfair,” he says.

On Oct. 5, the City of Somerville released a statement saying that Phase 3 Step 2 of the city’s reopening would remain on hold while the rest of the state proceeded. This step included the reopening of “indoor and outdoor performance venues” in addition to fitting rooms, arcades, and other recreational businesses. In the previous step, Phase 3 Step 1, indoor restaurants, gyms, yoga classes, and club hockey rinks reopened.

“The virus spreads indoors so much more than outdoors,” Epstein says.

Like Epstein, Davenport believes that different businesses were held to unequal standards. With the proper precautionary measures, she believes that live outdoor performances can resume safely.

“I think this ban was an oversight,” Davenport says. “The restaurants were given a clear plan while the music venues weren’t. I wish there were a way for the city to make it right, to make up for all the lost time, financially.” She believes that such compensation would prevent the city from losing more venues and small businesses.

Doug S. Kress, the director of Health and Human Services and of the Somerville Board of Health, writes in an emailed statement, “There is broad scientific consensus that live performances, especially those that involve singing, and large gatherings both indoors and outdoors, pose high risks for COVID-19 transmission and potential superspreader events.”

He continues, “Just as we worked with restaurants, gyms, houses of worship and others, we are currently working with performance venues and artists in Somerville to consider safer options for our community. As we face a potential fall surge, this is no time to let our guard down.”

In a town hall about the arts held over Zoom with Mayor Joseph A. Curtatone and members of the City Council, Epstein voiced his concerns regarding the ban. He emphasized the negative impact the coming cold weather would have on musicians’ income, work, and livelihood. “They want to be able to share their art with someone, to see people’s faces when they share it,” Epstein says. “Customers want to see and feel music.”

In response, Epstein received a phone call with the same explanation: Somerville was concerned about live performances drawing large crowds. However, “a week or two later,” the city lifted the ban on radio and recorded music in restaurants but kept their ban on live music. No longer seeking to make a profit for the rest of the year, The Jungle now pays its musicians 50 percent of all food sales. The other 50 percent goes to the Southern Poverty Law Center, a US civil rights advocacy organization.

“They are giving, constantly giving,” Davenport says. “I don’t know any other venue that does that. And they are always willing to take on any genre, any artist. They’re completely open; they’re not closing doors on any certain types of genres or people, which I have seen venues do in the past. So I’m just honored to work for them.”

Not performing for a crowd has impacted her work in many ways, Davenport says. . Besides the revenue from ticket sales, Davenport also generates revenue from selling merchandise at concerts.

The experience of performance itself is also a large part of music-making. “It’s weird not having people in the room. I love making eye contact with people while I perform and singing to them, seeing their emotions, their reactions, and things like that,” Davenport says.

The virtual platform has some advantages. Davenport can now keep up with her favorite artists by watching live streams. “I’ve been able to see a new kind of element to their performance and hear their pieces a different way than I would have ever heard them before,” Davenport says. “So, from a consumer perspective, from someone who listens to music a lot, I definitely enjoy that difference.”

This year the Somerville Arts Council hosted a virtual version of its annual PorchFest music festival — renamed “CouchFest” in light of the pandemic.

“If people want to do outdoor activities, and then the space is there, and they can respect those guidelines that were set to keep themselves safe and everyone else safe, like I said, I’ll be the first show to those events,” Mbah says.

Davenport is currently recording music and will be a part of a virtual Halloween music festival. Still, less than a week remains for musicians to perform at The Jungle before the club closes for the winter after a final concert on Oct. 17. They will reopen in 2021 “as soon as it is safe enough inside or warm enough outside.”

After The Jungle operates its outdoor patio one more time for a day of activism for democracy on Oct. 18, the seemingly uncertain winter will begin.