During the Coronavirus Pandemic, Town and Gown Cooperate

As the coronavirus pandemic forces retailers to close and students to evacuate campus, the city of Cambridge must rely more heavily on the University to weather the pandemic.
By Jing-Jing Shen and Charles Xu 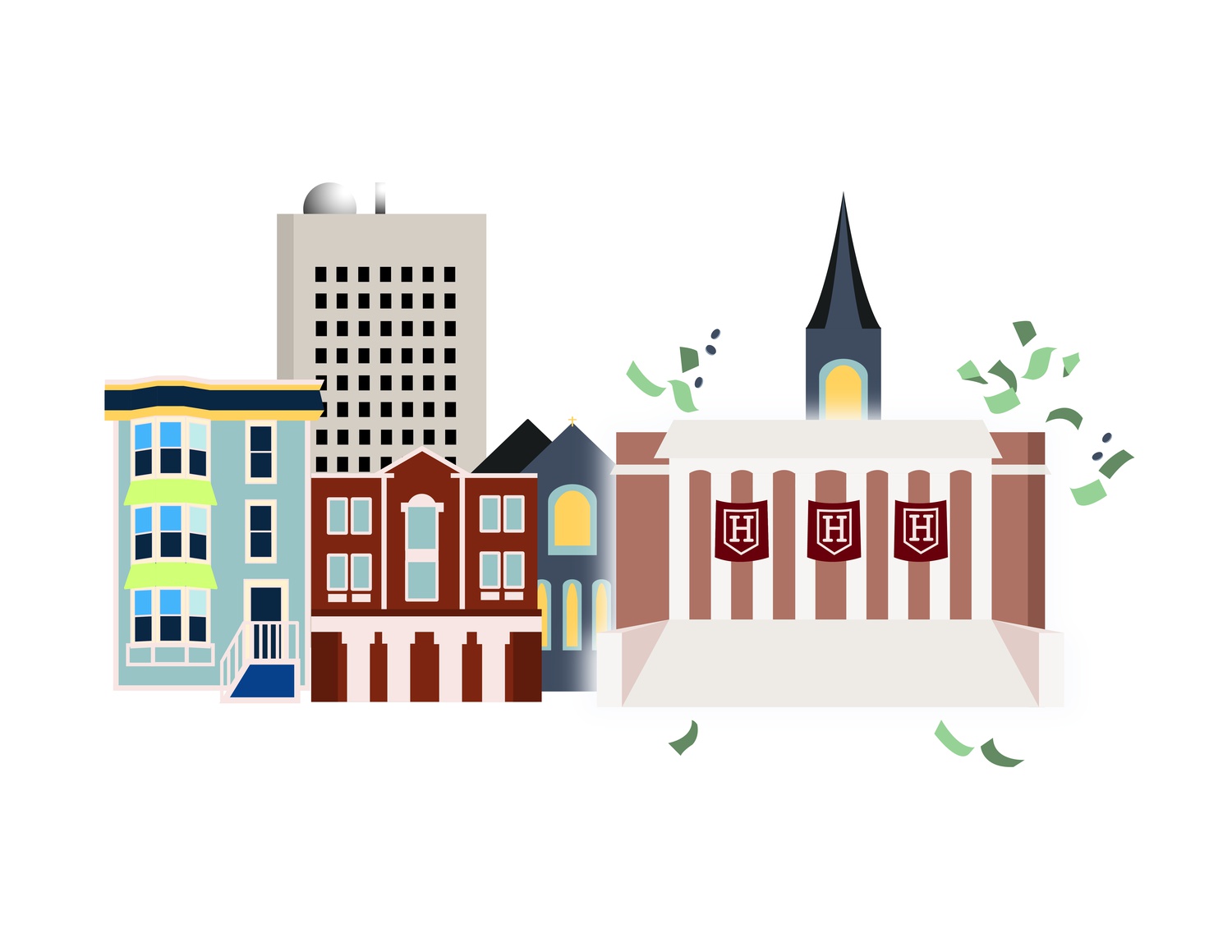 The coronavirus pandemic has seen Harvard and the city of Cambridge cooperate in new and surprising ways. By Elizabeth S. Ling

Roughly a month before the outbreak of the COVID-19 pandemic, Harvard representatives gathered at the City Hall Annex to present the University’s latest campus projects to Cambridge Planning Board members in the annual Town Gown meeting.

While giving an overview of recent initiatives, Harvard’s director of planning services Alexandra J. Offiong said the University hoped to be a “good neighbor” by ensuring projects for its own development did not encroach upon city guidelines and values.

However, more than three months later, the idea of “good neighbor” has taken on an entirely different meaning in the wake of the pandemic — shifting from one of non-disruptive behavior to generous support.

For Cambridge, a city typically home to roughly 40,000 University affiliates, the success of the non-academic — “town” — and the academic — “gown” — populations is inseparable. And as the virus forces retailers to close and students to evacuate, the city of Cambridge must rely more heavily on the University to weather the pandemic.

Residents, students, and city officials have called on the University to offer a portion of its endowment to mitigate the impact of the coronavirus. While it has not directly answered these calls, Harvard has provided infrastructure and other resources to the city.

In early March, Denise A. Jillson, the executive director of Harvard Square Business Association, recalled walking through Massachusetts Avenue and Brattle Street, where tourists, students, and residents frequently came to shop and dine.

New retailers like outdoor clothing supplier Patagonia and new eateries like California-based Veggie Grill had just settled into the Square. At the time, some of the biggest challenges these stores faced were attracting visitors amid online shopping’s increasing popularity and rising rent prices.

Two months later, nearly all Square businesses have shuttered due to the coronavirus outbreak. The streets themselves are devoid of traffic, presenting major economic costs for their owners.

Jillson estimates that out of the 292 businesses in Harvard Square, fewer than 20 remain open in mid-May. She said retailers are no longer attempting to combat the growth of online shopping. Rather, they are using it to help their businesses survive.

“In January, [we were] trying to focus on educating the public about how important it is for them to walk into the Square,” she said.

“The irony of it all was not lost on me,” she added.

As businesses experience major financial losses due to the stay-at-home advisory, owners occupying University-owned spaces have received aid from both the city and Harvard to stay afloat.

Jillson said even before the pandemic, the University was a “benevolent property owner,” often subsidizing rent below market rates and donating amenities like tables and umbrellas to the city and HSBA.

The University has furthered its efforts to support small business owners who lease its property in light of the pandemic, according to Meredith Weenick, the vice president for campus services.

Weenick said the University has reached out to its tenants to address their individual concerns. Based on each small business tenant’s situation during the pandemic, the University has offered “different rent-relief options” and “minimum-sales guarantees.”

Following the announcement that students would be required to vacate campus and continue their semesters online, Harvard also lifted its “lease requirements for mandatory minimum operating hours,” per Weenick.

As states issued stay at home advisories, University and city officials looked for places to house the homeless in Cambridge. With the closure of local shelters like the Harvard Square Homeless Shelter just weeks after pandemic reached Massachusetts, officials turned to alternative methods of housing.

Harvard and MIT donated $250,000 each to fund the construction of an emergency homeless shelter at the War Memorial Recreation Center, housed within the Cambridge Rindge and Latin School.

In the announcement, Cambridge Mayor Sumbul Siddiqui and City Manager Louis A. DePasquale praised the universities for their “extraordinary generosity” and deemed the War Memorial Center an “appropriate safe location” for the homeless population.

Other city officials called on the schools to provide more resources. City Councilor Quinton Y. Zondervan penned a petition challenging both Harvard and MIT to donate more aid and resources than a quarter-million-dollar donation.

In his petition — which has been signed by over 600 city and University affiliates — Zondervan criticized Harvard and MIT for getting away with “the bare minimum,” when “physical space” was most needed.

The petition urged the universities to house homeless residents in dorm rooms vacated by students who were sent home.

“These funds are not nearly enough, and what is much more critically needed is physical space to provide safe housing for everyone who needs to be physically isolated, including all community members currently experiencing homelessness,” the petition read.

Harvard spokesperson Brigid O’Rourke declined to comment specifically on the University’s decision to not house homeless individuals in dormitories. She also noted that the University made the Harvard Square Hotel available to house Cambridge first responders near hospitals and health care facilities.

DePasquale said he was grateful for the provisions in a press release.

“Having unfettered access to all the rooms at the Harvard Square Hotel will allow our health care workers and first responders a safe place to stay in close proximity to our emergency facilities,” DePasquale wrote. “It alleviates stress for both our frontline workers and their families during a very anxious time for everyone involved.”

Harvard has also offered campus facilities — especially areas with easily-accessible restrooms and office space — to assist with health care operations, according to the Harvard Gazette.

Beyond providing infrastructure and economic support to combat the effects of the virus, the University has invested in programs to improve education and health outcomes during the pandemic.

With Cambridge and Boston public schools forced to adapt to remote learning for the remainder of the school year, Harvard Business Publishing hosted a session over Zoom to offer teachers tools to improve online education, with approximately 9,000 educators in attendance.

Harvard also distributed approximately 20,000 copies of curriculum-tailored packets for students at all grade levels in the BPS system, Maile Takahashi, the University’s Director for Community Programming, said in an interview with the Harvard Gazette.

The University and its affiliates have also provided personal protective equipment from their facilities, with professors donating gloves, masks, lab coats, and eye guards. The school’s Environmental Health and Safety team gathered the supplies to be distributed to hospitals, health care workers, and state agencies.

The University also connected faculty members to elected officials and community leaders, according to Provost Alan M. Garber ’76 in an interview with the Gazette.

—Staff writer Jing-Jing Shen can be reached at jing-jing.shen@thecrimson.com.