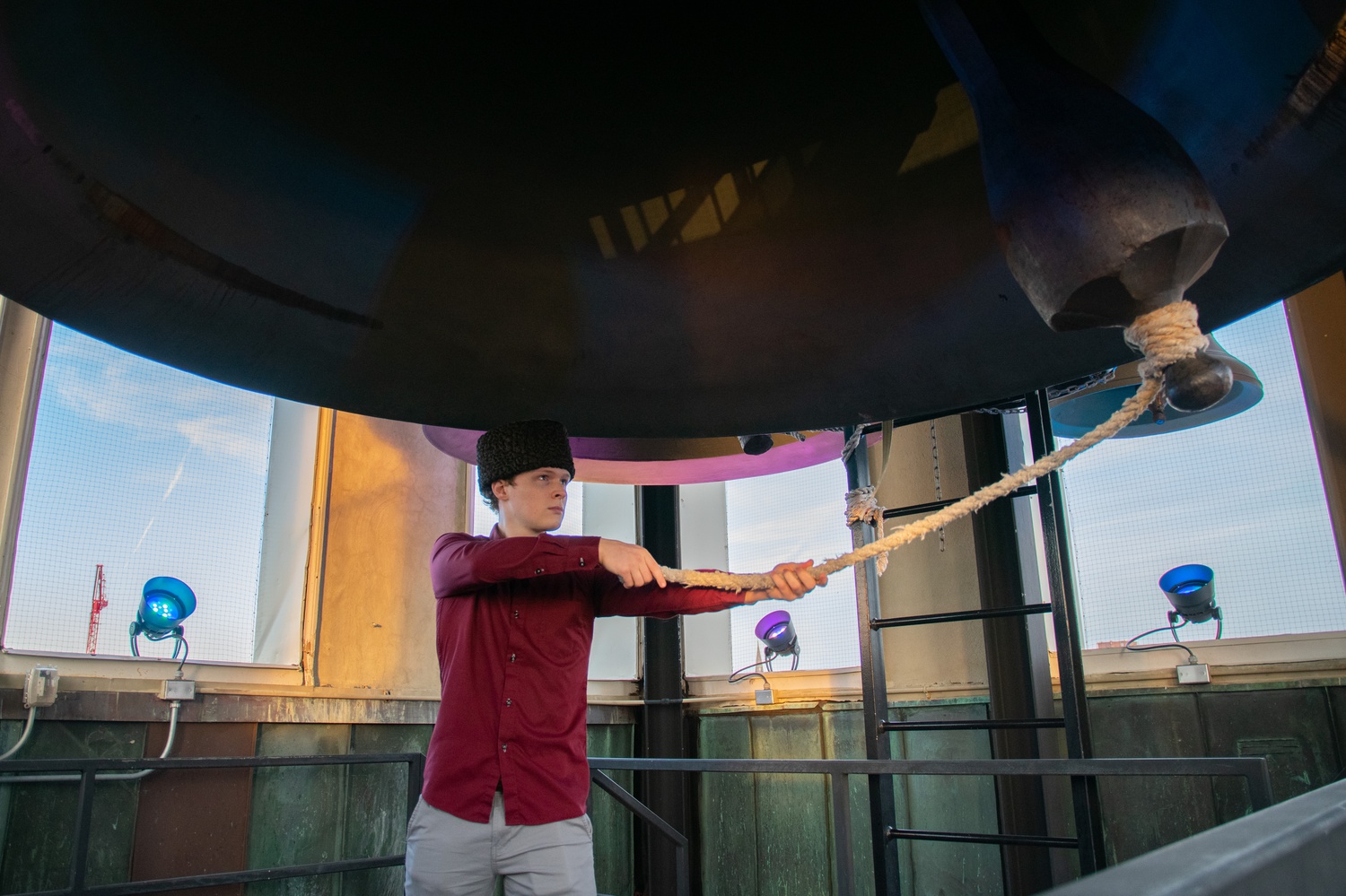 The Russian Bell Ringers Society Rings Out Support for Ukraine

When Russia launched a military invasion of Ukraine on Thursday, Feb. 24, Georgiy A. Kent ’22 watched in anger and dismay as his family’s home region came under attack.
By Huong T. Le

When Russia launched a military invasion of Ukraine on Thursday, Feb. 24, Georgiy A. Kent ’22 watched in anger and dismay as his family’s home region came under attack. Kent, a former president of The Lowell House Society of Russian Bell Ringers, decided to spearhead an emergency ringing of Lowell’s bells in a symbolic display of solidarity with Ukraine.

Around 4:30 p.m. that day, people around Harvard’s campus heard the bells playing the Ukrainian anthem.

Kent joined the Russian Bell Ringers Society during his first year at Harvard. His connection to both Ukraine and Russia has motivated him to be a part of the Society to preserve the culture shared by both countries — he spent five years living in Kyiv with his older sister and mother, who is Crimean Tatar. “Ukraine and Russia are predominantly Eastern Orthodox, and bell ringing is a tradition [celebrated] in both countries,” he says. 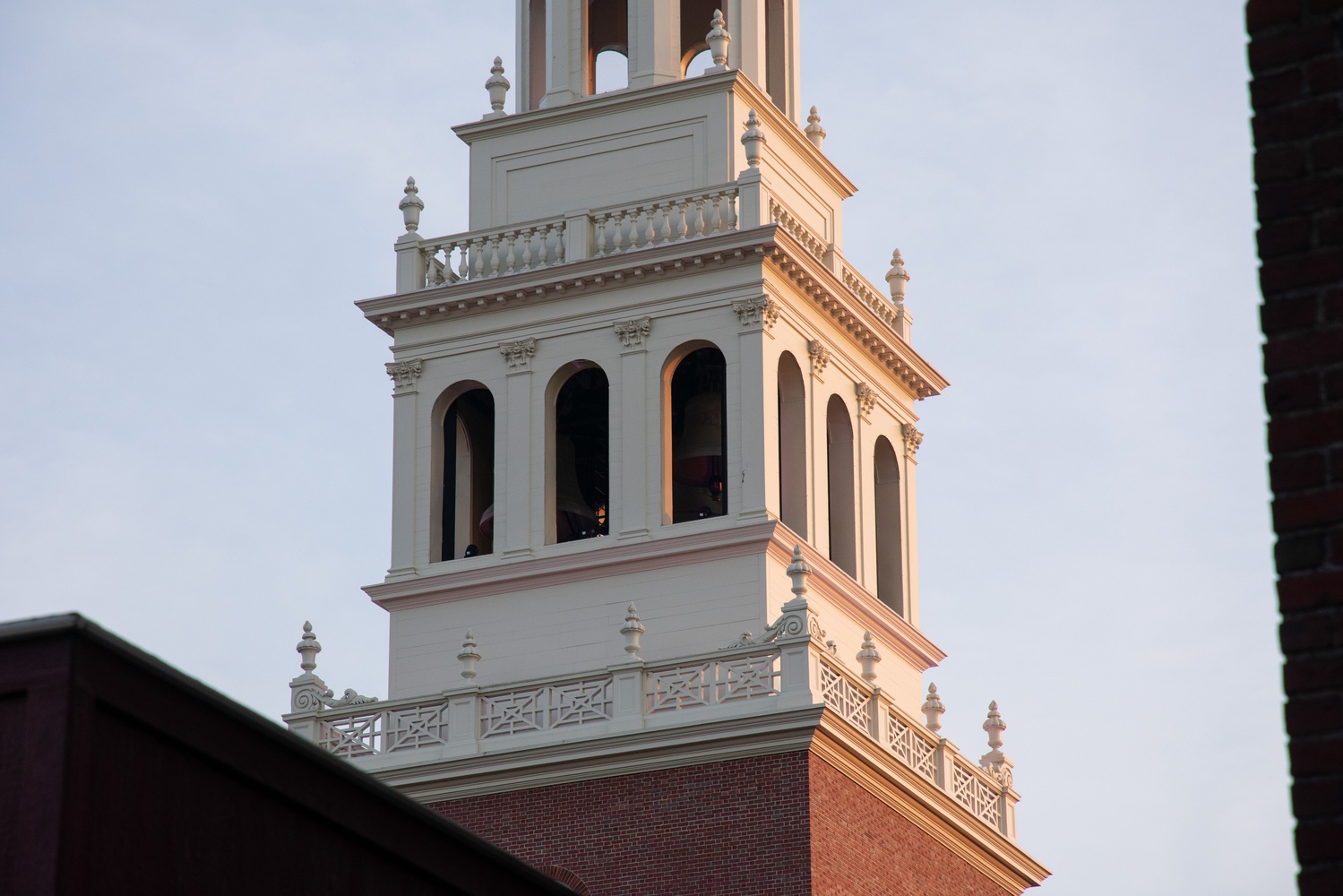 The Lowell House bell tower rings out its bells every Sunday. By Julian J. Giordano

For Kent, the close-knit Society is one of his main communities on campus. For their social gatherings, Kent says the bell ringers often enjoy snacks from a Russian store in Allston called BazaAr Supermarket. This week, Kent and his fellow bell ringers are celebrating Maslenitsa, which he says is like the Eastern Orthodox version of Mardi Gras, after their regular Sunday ringing.

In his last two years as the society’s president, Kent has worked on promoting cultural exchange among Society members, alumni, and bell ringers from around the world — but the Society already has a long history of cultural exchange.

The Bell Ringer Society has a long-standing partnership with the Danilov Monastery in Moscow. In 1930, Charles R. Crane, a wealthy American businessman, bought 17 bells from the monastery and donated them to Lowell in an attempt to prevent Stalinist government officials from melting them down. In 2008, the bells were returned to Danilov Monastery and exchanged for a replica set with the help of Father Roman Ogryskov, lifelong bell ringer and hierodeacon of the monastery. 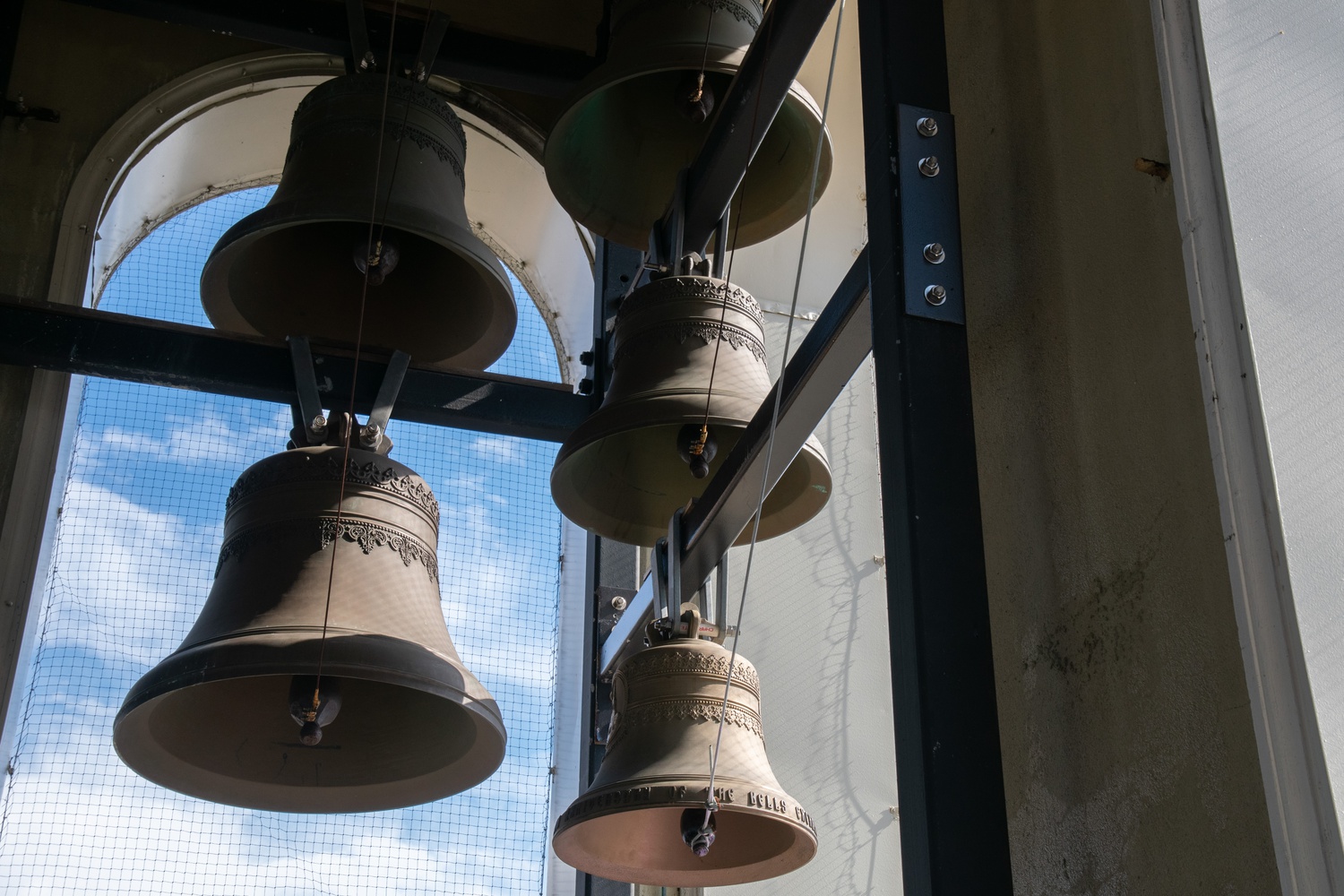 Before the pandemic, groups of Harvard bell ringers would travel to Russia for two weeks in the summer to study bell culture, tour sites of bell production, and practice ringing bells at various monasteries around Russia. By Julian J. Giordano

According to Kent, Father Roman, visits Lowell every other year to hold master classes on bell-ringing techniques with the society.

Before the pandemic, groups of Harvard bell ringers would travel to Russia for two weeks in the summer to study bell culture, tour sites of bell production, and practice ringing bells at various monasteries around Russia. “This is the cultural exchange that we were able to experience firsthand,” Kent explains.

The Society has not been able to visit Russia since the summer of 2018, and Father Roman’s last visit was in early 2020. With the pandemic, recent war, and airspace sanctions, Kent says it is unclear when the group will resume its exchange.

Though he recently retired from his two-year presidency in the Society, Kent maintains his engagement with the organization by mentoring the next generation of bell ringers. If you happen to be in Lowell House on a Sunday around noon, you might run into Kent wearing his signature black Karakul hat, discussing logistics with his ringers near the entrance of the bell tower. 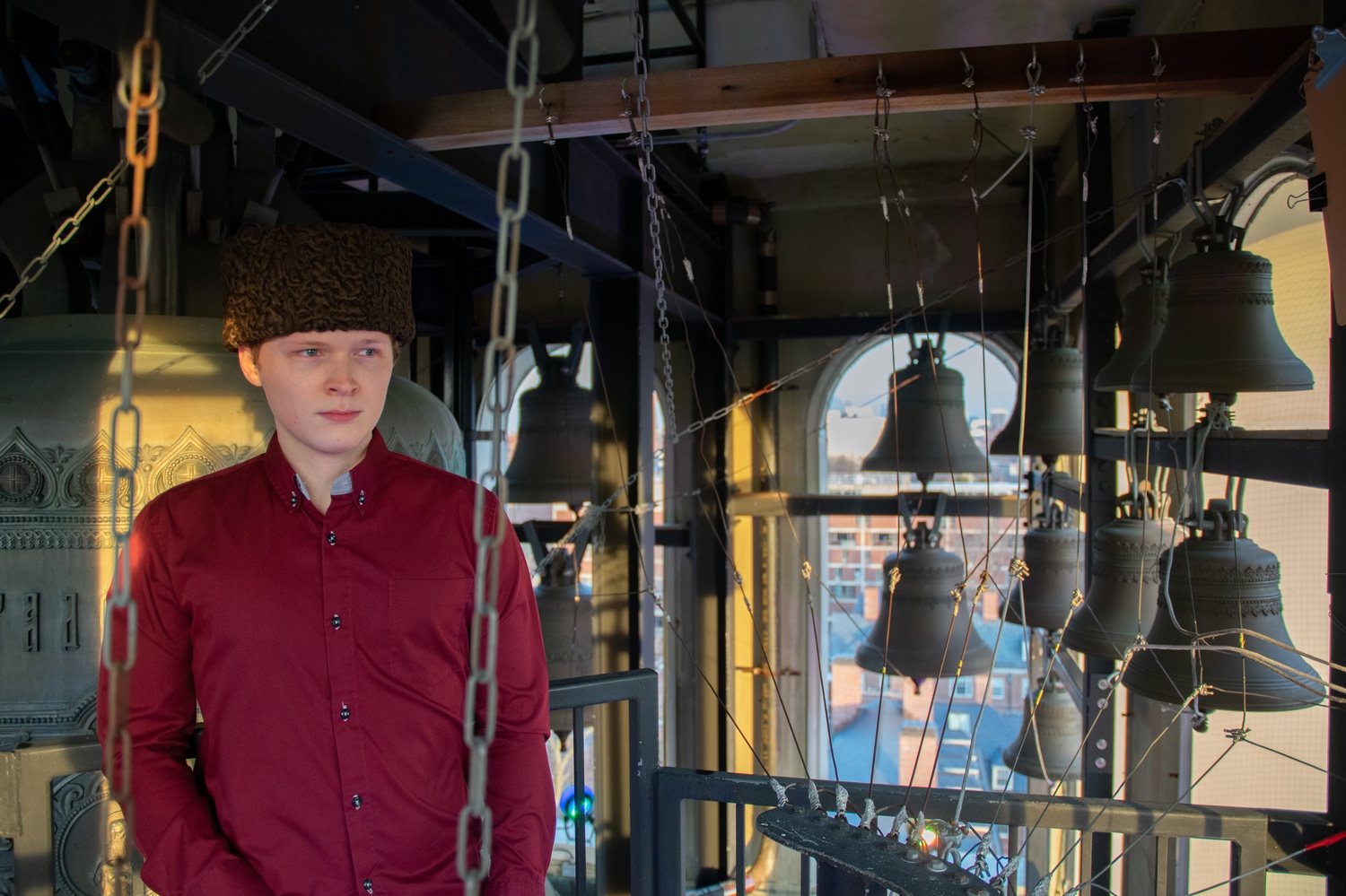 Kent has connections to both Ukraine and Russia — he spent five years living in Kyiv, and his mother is Russian, of Crimean Tatar heritage. By Julian J. Giordano

Kent refrains from characterizing the Bell Ringer Society as Russian-centered. He says that his relationship with the organization has not changed as a result of the war, as the Society ultimately is a community that values cultural exchange and understanding. “It just happens that the bells came from a Russian monastery,” Kent says. “At the end of the day, Eastern Orthodox bells are Eastern Orthodox bells, and they make the same sounds.” 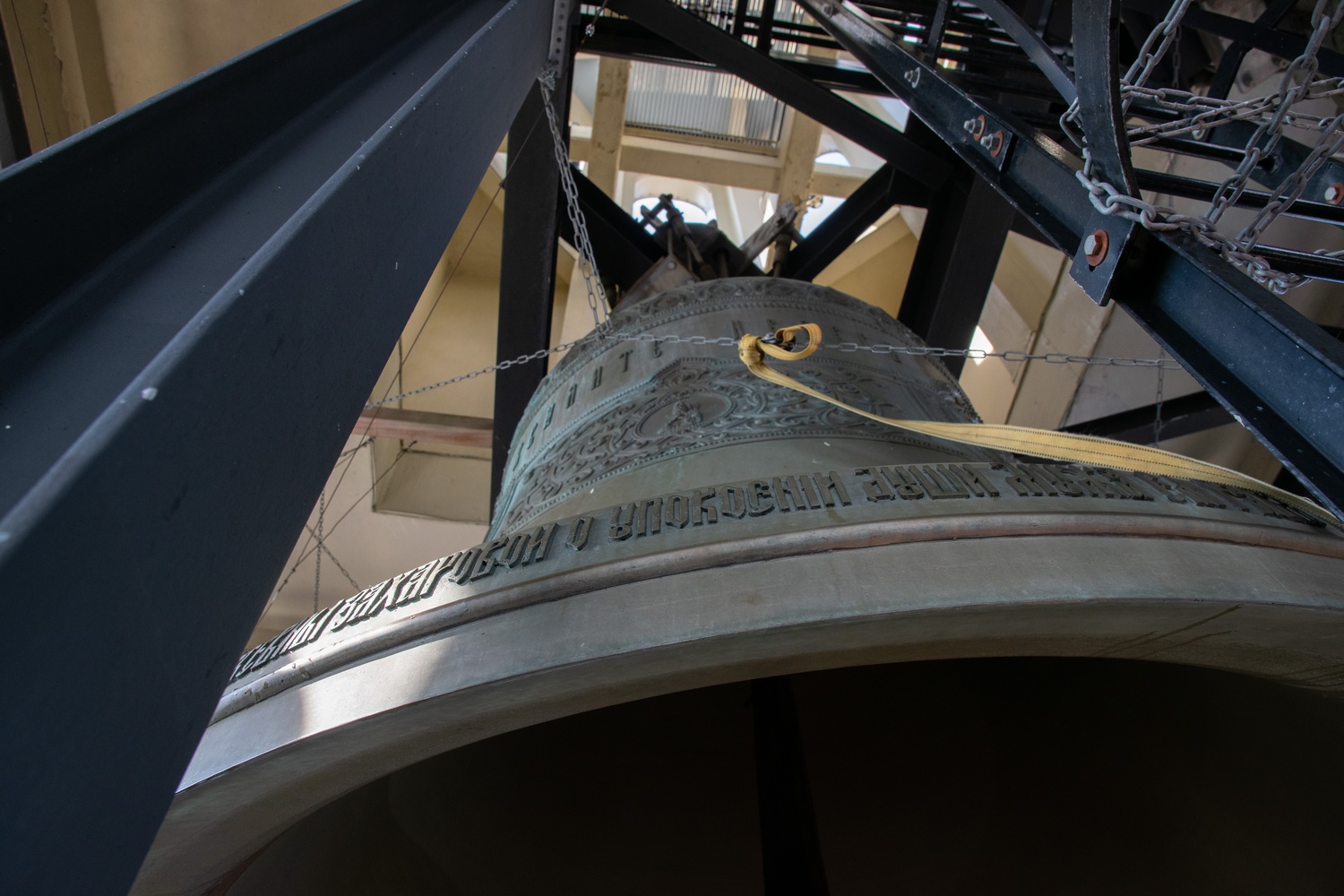 The original Lowell bells were gifted to the House by businessman Charles Crane, who bought them from the Danilov Monastery in Moscow in 1930. In 2008, they were replaced with replicas. By Julian J. Giordano

Now, Kent utilizes the Society as a platform for not only cultural exchange but also solidarity and advocacy. Some of the bell ringers recently joined hundreds of demonstrators in a rally urging the University to publicly denounce the Ukrainian invasion.

“Even though we have Russian in our official name, we’re more than that,” Kent says. “We’re a community of bell ringers who are supportive of Ukraine, their independence, and sovereignty.”

A previous version of this article incorrectly stated the heritage of Georgiy A. Kent’s mother. She is Crimean Tatar, not Russian of Crimean Tatar heritage.

A previous version of this article incorrectly stated the hat worn by Georgiy A. Kent ’22 is called a Ushanka. In fact, the hat is called a Karakul.