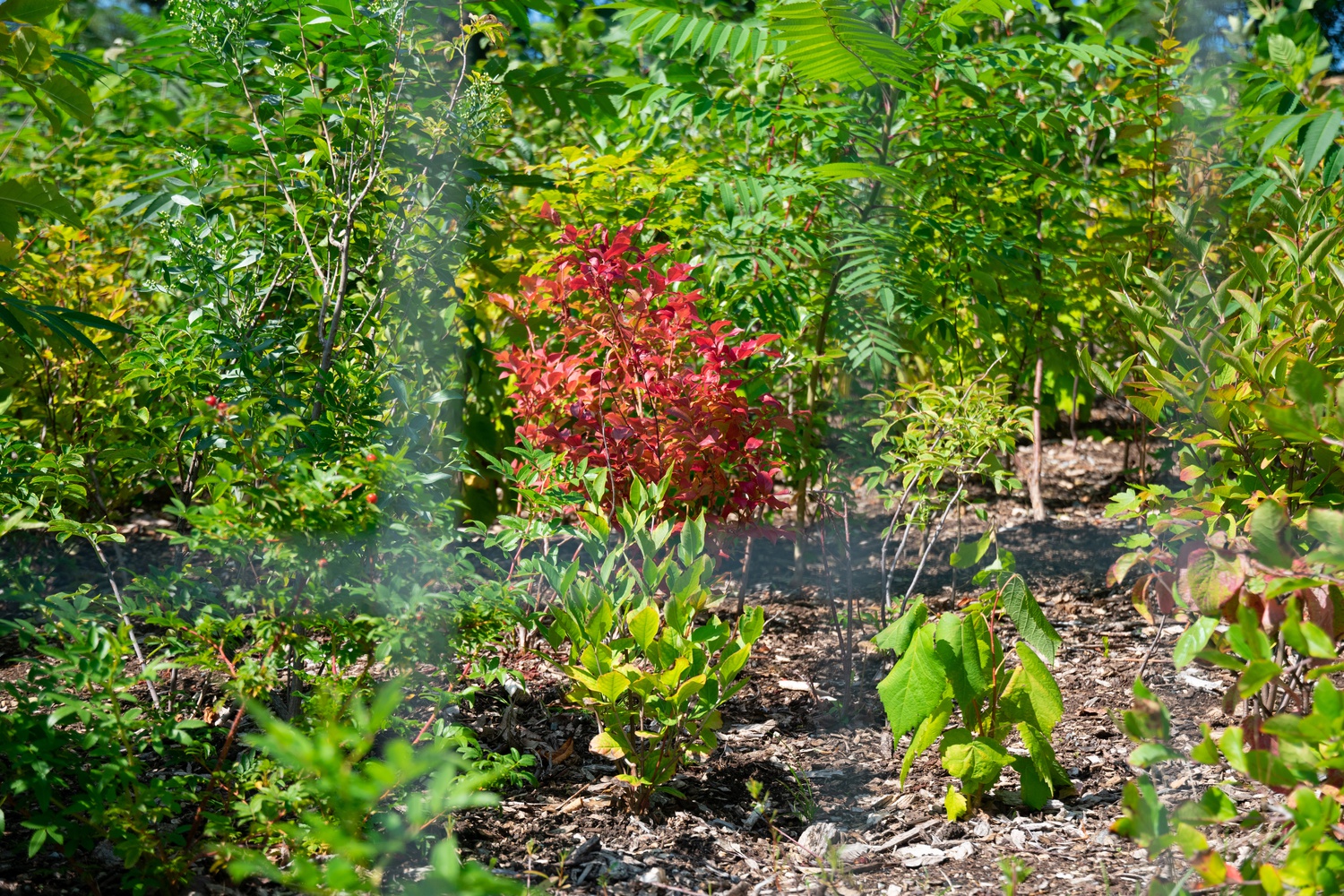 Cambridge has endured a drought since mid-June; since July 21, it has stayed at a “critical” level. Yet only a few weeks after the heat wave subsided, the trees in Danehy Park now appear sprightly and green.
By Olivia G. Oldham

On an afternoon in late September, Danehy Park has the calm of an open plain. Joggers and dog walkers amble; a few teenagers lounge by the track. Commercial sprawl adjoins the west side of the park; the east is lined by one of the wealthier neighborhoods of already-wealthy Cambridge; and to the south sit mixed-income affordable housing apartments.

In the center of the park, Maya Dutta is tending to the park’s 4,300-square-foot Miyawaki forest, which will turn a year old on Sept. 25. Dutta is bubbly and prone to rhapsodizing about the plants, some of which have already outgrown her — though, she points out, “I’m not that tall — I’m 5-foot-2.” She works for Biodiversity for a Livable Climate, a Cambridge-based nonprofit that advocates for biodiversity as a solution to the climate crisis. She is project manager for the Danehy Park Miyawaki Forest, a collaboration between the nonprofit, the city of Cambridge, and a Swiss forestry organization called SUGi Project. 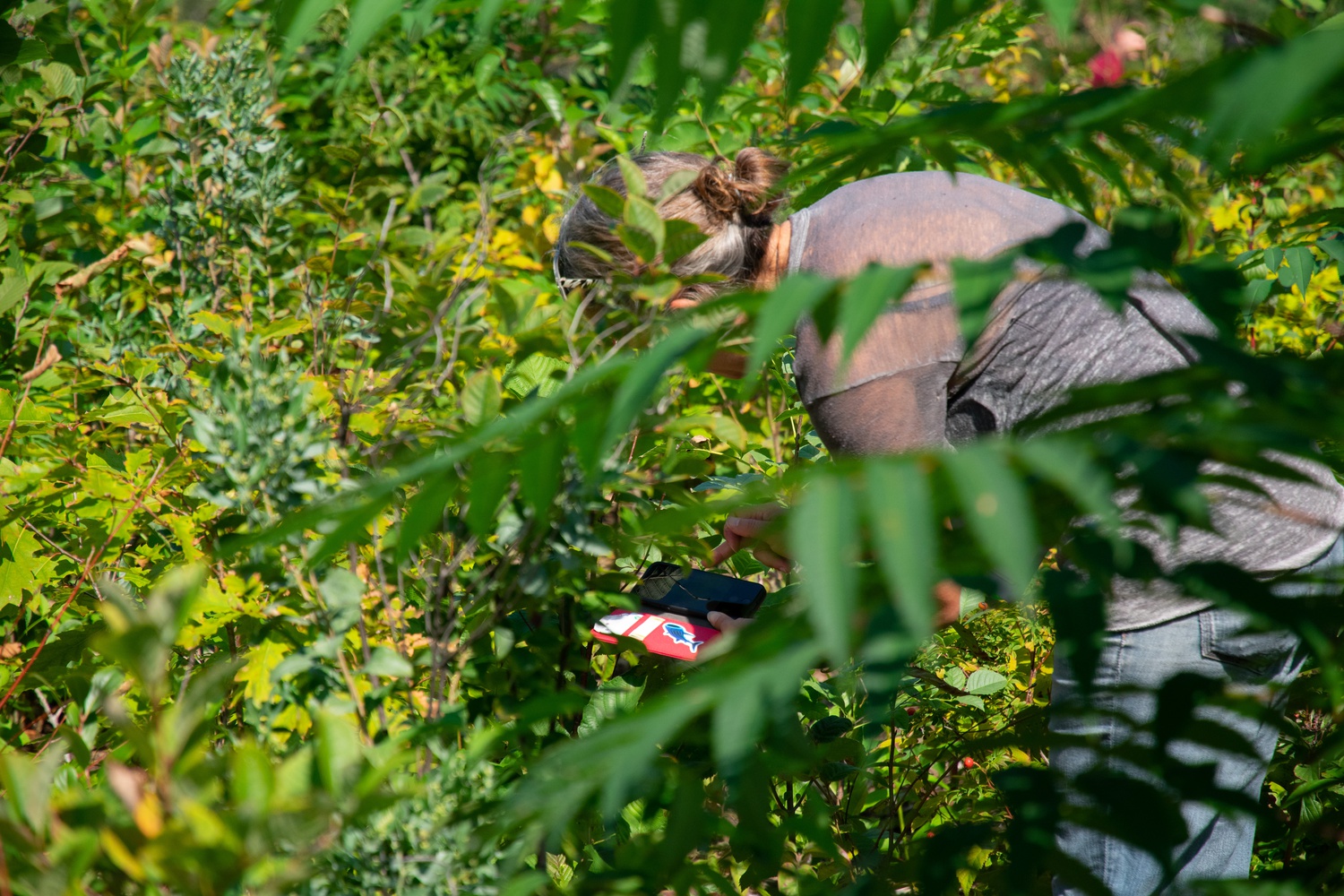 A woman snaps a picture of a plant at the Miyawaki Forest at Danehy Park in North Cambridge. By Julian J. Giordano

If you decided to dig a hole 100 feet into the ground below the Miyawaki forest, a certain history would emerge. At the very bottom of that hole would be glacial bedrock, hundreds of thousands of years old. Just above it, you’d see a deep divot into a layer of clay, excavated by the New England Brick Company between 1847 and 1952. In the 19th century, according to the Cambridge Historical Commission, North Cambridge was dotted with “muddy claypits, smoky kilns, and vast drying sheds”; the New England Brick Company advertised a “Harvard”-style brick, burnished and water-struck like those in the Yard. Once construction and brick production in Cambridge slowed, the site became an industrial landfill. Fifty years worth of household refuse fills a thick layer beneath the surface of the park.

In 1971, the landfill was closed, sealed, and used as a staging ground for the extension of the MBTA Red Line through Alewife. In 1988, the city began to establish a park on the site. One of the first of its kind in New England, the “recycled” park was opened to the public in 1990; in the 22 years since, Danehy has maintained its status as the largest public park in Cambridge. 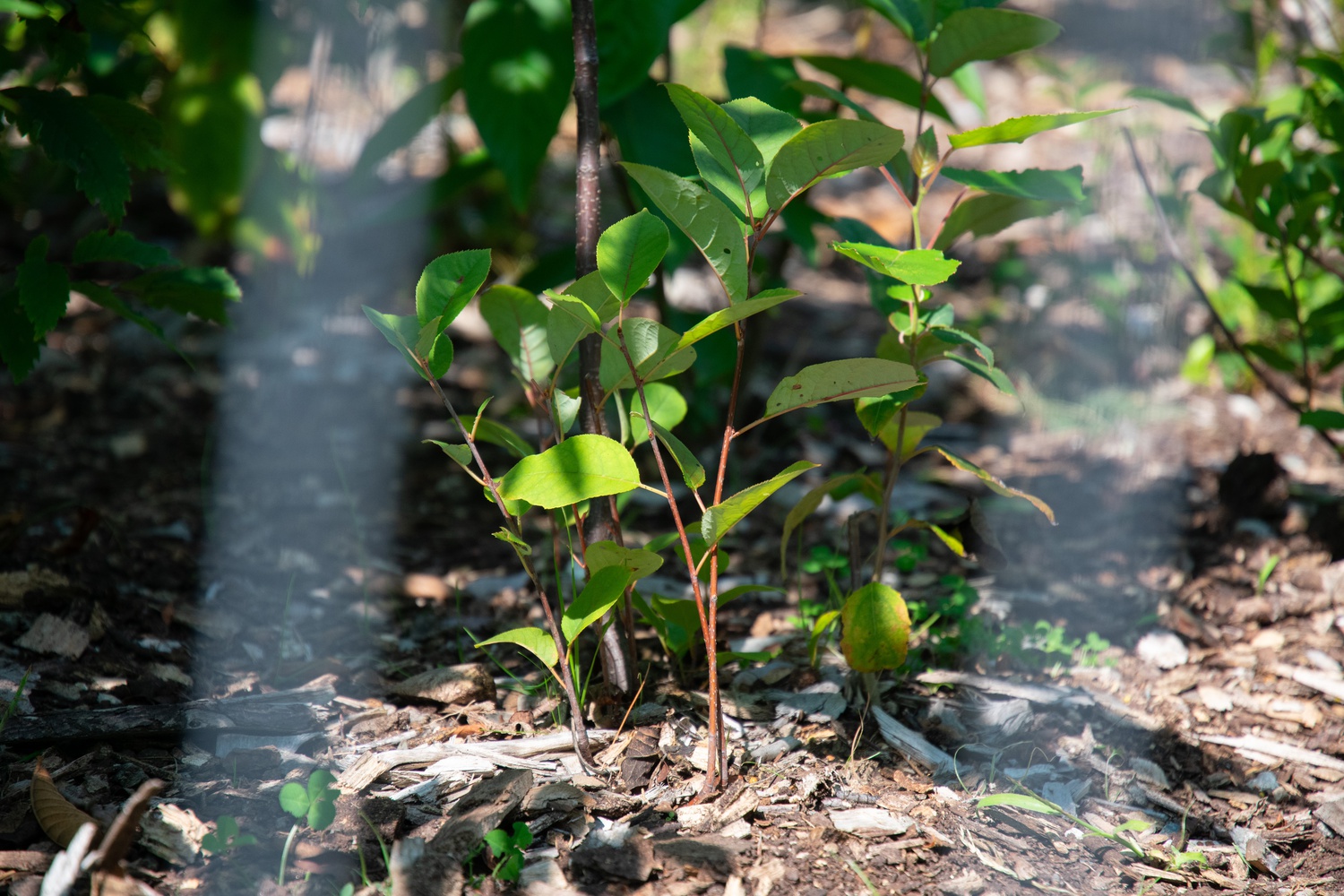 Plants grow in the Miyawaki Forest at Danehy Park. By Julian J. Giordano

The “pocket” forest is designed according to the principles of the late Japanese botanist Akira Miyawaki, who recommended densely planting species native to their region. When planted alone, trees can’t build rich networks with other plant life; Dutta points to a solitary leafless maple several yards away as an example. But in tandem with other plants — and with a few years of maintenance following planting — hearty systems emerge. While the City Forestry department aims for a 90 percent survival rate among its trees, the Danehy Park Forest has only lost two percent of its plants in the last year, according to Andrew Putnam, the city’s superintendent of forestry. As the forest grows and the landfill’s waste inevitably permeates the barrier above it, the soil will help break down the refuse, adding its own layer of history to the patch of land.

Before that industrial waste was introduced, before the Brick Company, the Massachussett and Pawtucket peoples were the stewards of this land. They actively managed robust forests and closely studied the properties of local plants. The project of “reforesting,” as it is often called, is fraught; a “return” to forestry often neglects the long history of Indigenous care for Northeastern land. In an attempt to address this, the forest’s planners collaborated with local tribe members and Marylee Jones of the Yakama Nation to ensure that Danehy’s Miyawaki forest features a variety of native plants. Dutta hopes that as these projects expand, more Indigenous people will have central roles in the nurseries that supply these plants. 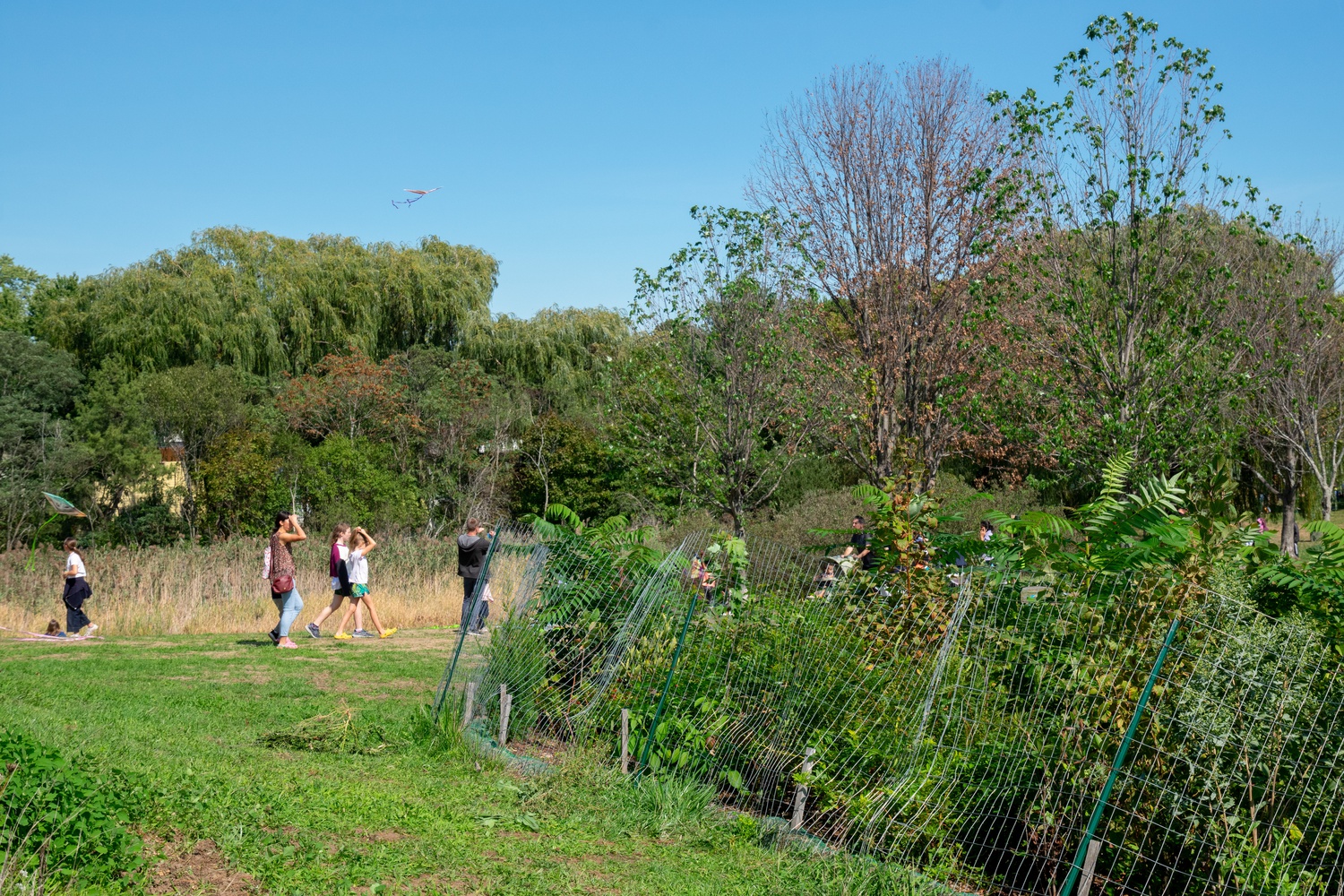 On this particular day, Dutta is measuring the heights of the forest’s trees. She is unsurprised to find they are shorter than projected the year before. As Dutta says, “The particular heat and dryness of this summer was not predicted.” Cambridge has endured a drought since mid-June; since July 21, it has stayed at a “critical” level. Putnam says that through the summer, all of the city’s water trucks were watering 12 hours a day and sometimes even through the night “to try to get through the worst of it,” he says. The forest also suffered, partly because the irrigation system in Danehy Park broke in late August. Yet only a few weeks after the heat wave subsided, the trees now appear sprightly and green.

Dutta imagines that forests like this one will become more crucial as the climate crisis intensifies. Miyawaki forests can be as small as 1,000 square feet or, as Dutta puts it, the size of six parking spots. “Take your parking lot, depave six parking spaces and turn it from hot, congested asphalt that doesn’t support anything [...] into something living,” she says. 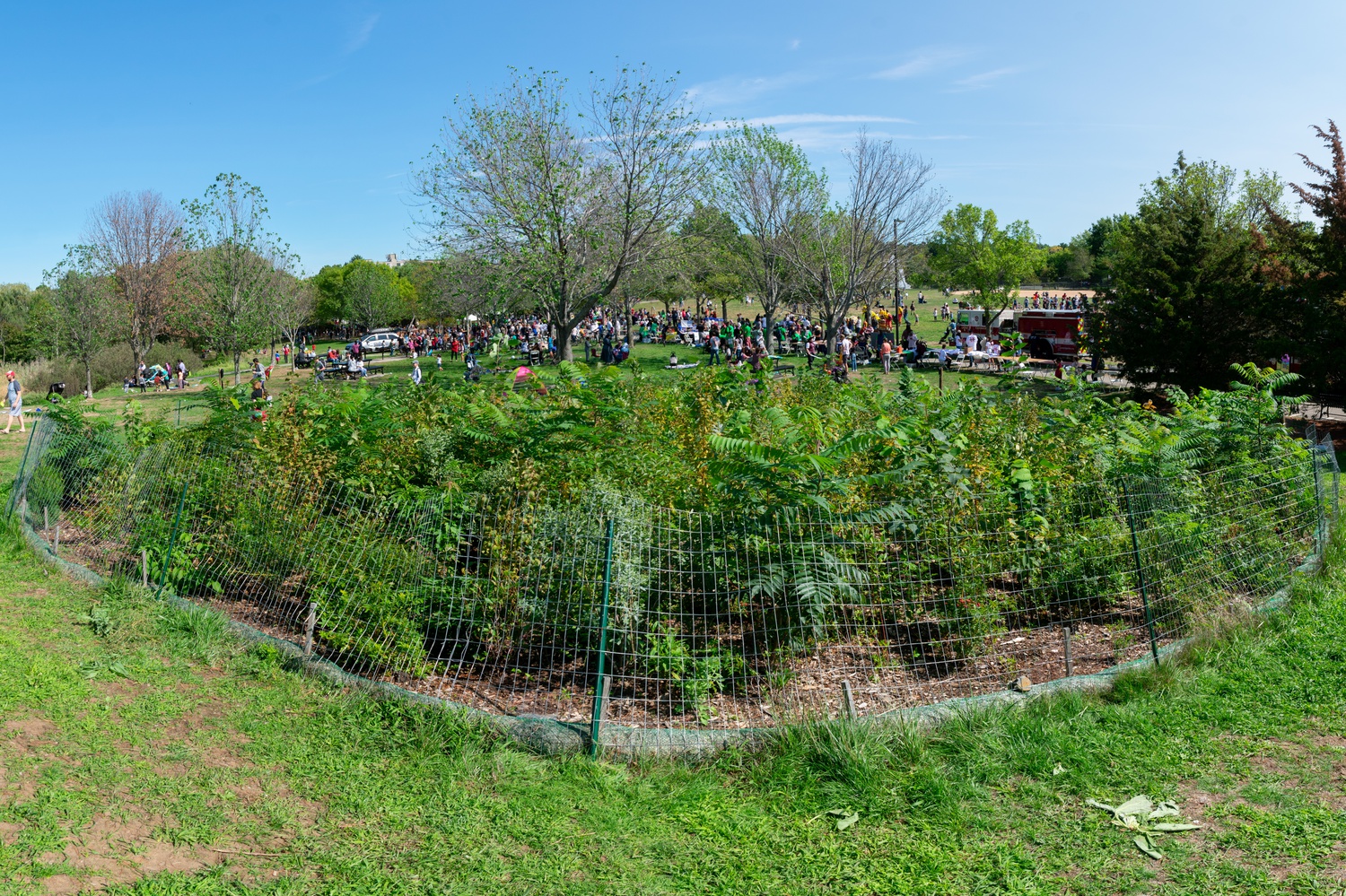 Danehy Park, in North Cambridge, is home to one of the region's first Miyawaki Forests, a method of reforesting which uses native plants to build a resilient ecosystem. By Julian J. Giordano

In cities like Cambridge, urban heat islands will become more prevalent as global temperatures rise: Areas without much plant life become hotter, demand more energy use, and concentrate air pollutants. These areas, Dutta adds, tend to be clustered in poorer neighborhoods. A few parking spots’ worth of forest could, simply put, make these neighborhoods more livable.

As we circle the forest, Dutta says that one of her favorite parts is how it sounds: alive and buzzing. Dragonflies and monarch butterflies flutter overhead. Sumac, chokeberry, and elderberry grow in the underbrush. In November, a smaller Miyawaki forest will be planted in Green-Rose Heritage Park. The next summer, too, is projected to be hotter than the last. Will this young forest have time to grow?

— Olivia G. Oldham was the Magazine Chair of the 148th Guard. She can be reached at olivia.oldham@thecrimson.com. Follow her on Twitter @olivia__oldham.