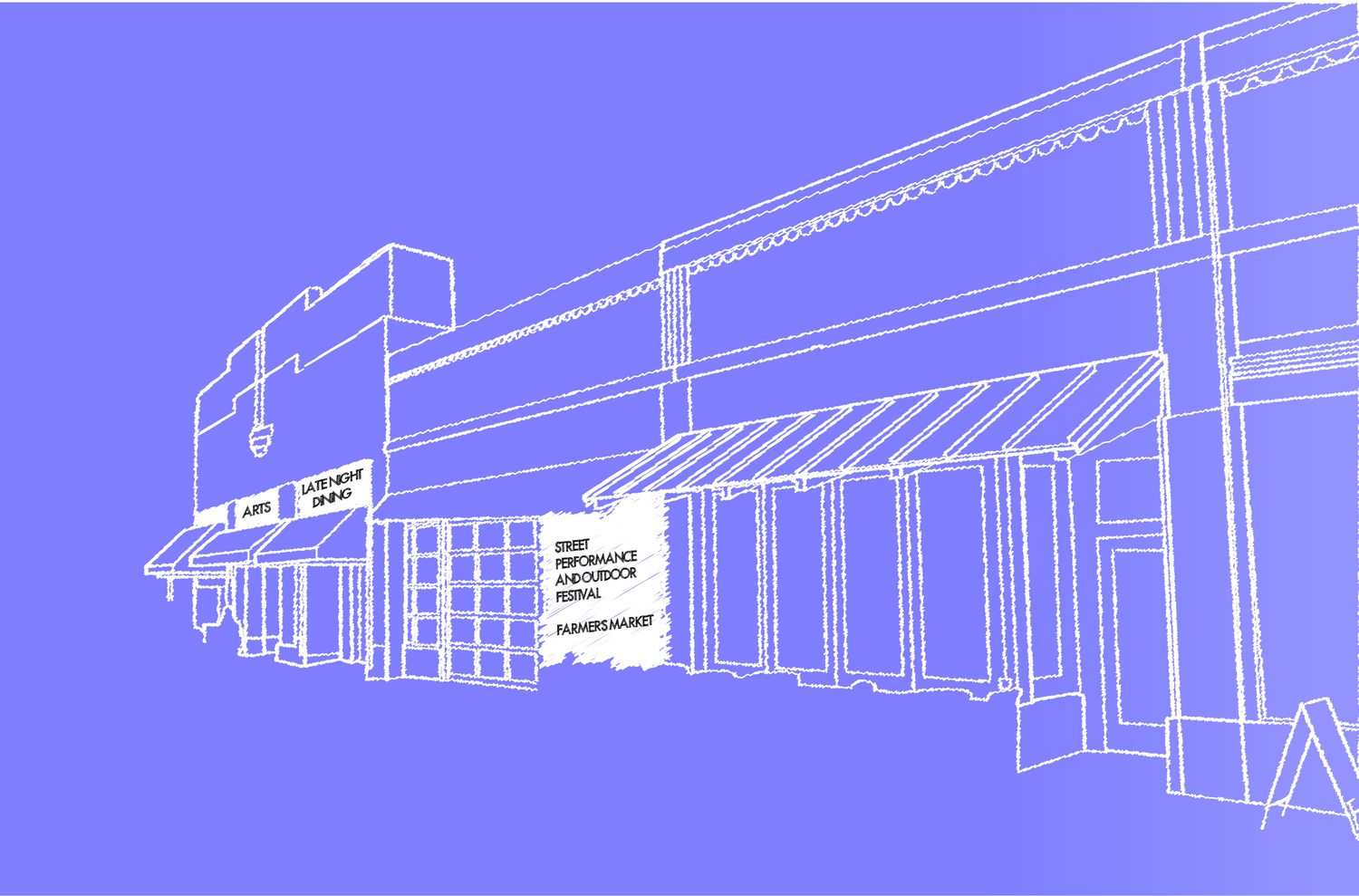 When Denise A. Jillson picks up her phone and hears someone ask, “Are the shoes ready?” she knows she needs to run up the street to Felix Shoe Repair.

That’s because Christos Soillis, the shop’s owner, does not have his own landline — so Jillson volunteered to field calls meant for him.

“If you look at the directory, the phone for Felix Shoe Repair is our number here,” she said, sitting in her office at the Harvard Square Business Association.

Whenever she gets a call meant for the local shoe shop from the Brattle Street office, Jillson stops whatever she is doing, rushes down Massachusetts Avenue, and alerts the store’s employees.

Directing customers to the shoe shop is not a formal part of Jillson’s job description. As the executive director of the HBSA — a job she has held for 13 years — she coordinates events to promote local shops, restaurants, and non-profit groups. She also informs local business owners of information relevant to their stores and connects them with resources from the city of Cambridge.

Several Square business owners and HBSA colleagues said they think one of the hallmarks of Jillson’s leadership is her willingness to go above and beyond her explicit responsibilities.

“I don’t think people understand the scope of what it is that this office produces to make this an inviting place for people, so there’s a lot of things behind the scenes that people aren’t aware of,” said William W. Manley, the HSBA’s marketing and events manager, who has worked with Jillson for nine years.

“She does a lot of things for not only for me, for everybody,” he said. “Go ask something, she’s there. She’s going to help you, doesn’t matter — daytime, nighttime, overtime — doesn’t matter what.” 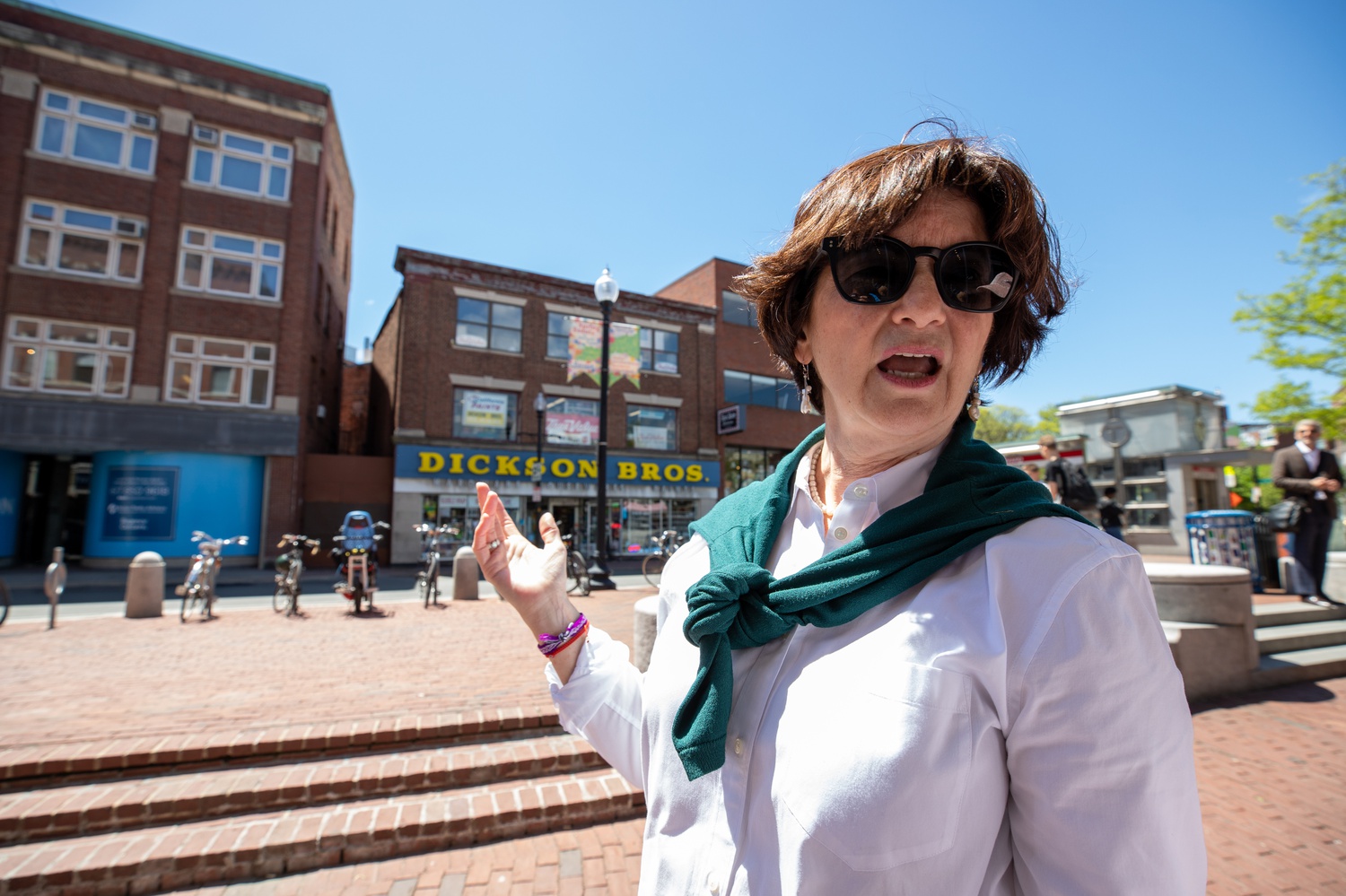 Denise A. Jillson, the Executive Director of the Harvard Square Business Association, discusses the state of the Square. By Ryan N. Gajarawala

A Vision for the Square

When Jillson first stepped into her role in 2006, she was presented with the Harvard Square Initiative, a set of documents that outlined changes for the Square’s future commercial landscape. Ever since, the papers have sat on her desk enduring time and coffee stains.

“I took that as my roadmap, and that hasn’t changed,” Jillson said. “And that has nothing to do with me, or frankly the association, and everything to do with what the community wanted and how they envisioned Harvard Square.”

Jillson’s current project is working alongside Cambridge to restore and repurpose the kiosk in the heart of the Square, which currently houses Out of Town News. She’s also advocating for constructing a new theater on Church Street, where a once-vibrant theater now stands empty and abandoned.

“It’s about this absolute belief from our leadership here in Harvard Square and the University and the city of Cambridge that this place is important and that nothing, or as little as possible, should slip through the cracks,” she said.

As Jillson tries to accomplish her goals for the Square, however, she has faced some challenges. In the past year alone, there has been significant turnover among its businesses — Crema, Chipotle, Sweet Bakery, Starbucks, Urban Outfitters, Tealuxe, Au Bon Pain, and Petsi Pies have all closed their doors.

Just this month, the new owner of the World’s Only Curious George shop announced the store would shutter its Harvard Square location and move to Central Square on June 30, citing rising rent prices.

Jillson attributed many of these closings to the rising popularity of online shopping.

“What people have to understand is when they make a decision to purchase online, or even to have Uber Eats delivery, that has an impact,” she said. “And the reason for that is, if you’re at home and you’re getting something delivered from Felipe’s or El Jefe’s, the chances of you popping into the Coop to pick up a book or going into Black Ink to get a little gift for a friend’s birthday this coming weekend has just become completely diminished, right? It’s not going to happen.”

Not everyone, however, completely agrees with Jillson’s characterization of the issues facing Square businesses.

Susan Corcoran, the owner of stationery shop Blank Ink, wrote in an emailed statement that she does not think public tastes are what are driving stores out of the Square.

“With unsustainable rent increases and development construction displacing more of us in the near future, it's disingenuous to say that the community makes the choice of who succeeds, but community support at this time is crucial,” Corcoran wrote.

Corcoran added that she decided not to renew her membership with the HSBA this year. She said that she intended to use the funds to foster a “grassroots movement” that aims to encourage shoppers to support local businesses.

Jillson replied in an emailed statement that encouraging support for local businesses is “amongst our highest priority,” member or not.

“While over 70% of the businesses in Harvard Square are locally-owned, independent, we work on behalf of all,” she wrote. “We value our members and appreciate their support. Those businesses who are not dues paying members of the HSBA surely benefit from our efforts.”

Vice Mayor of Cambridge Jan Devereux said that while the HSBA and Jillson will increasingly have to contend with changes in the Square, she said she thinks they’ve responded well to challenges so far.

“People are like, ‘Oh, it’s not what it used to be, it’s dead,’ and you know, that’s not true, but it needs to evolve, and I think Denise knows that and is working really hard,” she said. “I give her a lot of credit for being so determined, and so optimistic, and so positive that Harvard Square has survived for centuries and will survive.” 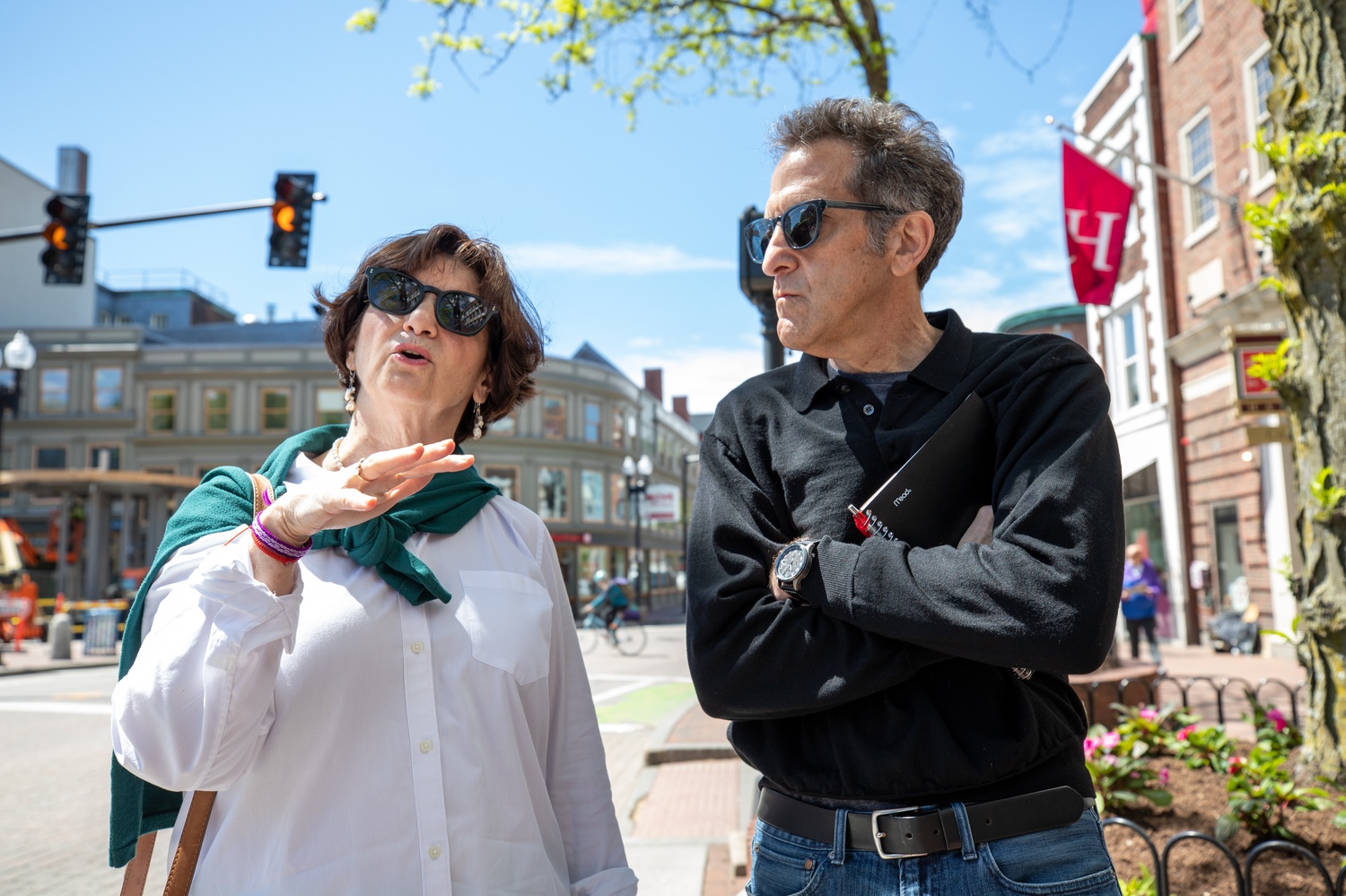 Harvard Square is home to many local and national businesses but has faced a number of closings over the last year. HBSA Director Denise Jillson is pictured here on the left. By Ryan N. Gajarawala
Advertisement

Central to Jillson’s responsibilities is supporting businesses and helping them draw customers.

Out of the many initiatives she has lead over her tenure, Jillson says she is particularly proud of her social media strategy.

When she wants to drum up publicity for local restaurants, she posts on Facebook at 11:55 a.m. — a time she says residents are likely to be hungry and searching online for menus.

Some local business owners say Jillson’s attention to this sort of detail shows her individualized commitment to the Square’s businesses.

When Salt & Olive moved to a new location in the Garage earlier this year, Jillson and the HSBA helped Taylor by posting about Salt & Olive’s move on their website. The HSBA also facilitated interactions between Salt & Olive and Cambridge’s city manager to help Taylor to obtain her lease and license.

Suzy L. Palitz similarly praised Jillson’s willingness to tailor her support to each business’s needs. Palitz, who owns Furnishing Hope — a nonprofit organization that collects furniture donations and distributes them to families transitioning out of homelessness — said that when she was moving from Central Square to Harvard Square in September 2017, Jillson met with her to strategize for the relocation.

“From that very first meeting, she was just amazing in terms of brainstorming about how to help us get settled here, how to help us reach out to the community,” Palitz said.

Jillson said she tries to offer advice to small and large businesses alike, and works to bring all of them into the Square’s community.

“When new people come to town, and it doesn't matter who they are, whether they’re an international company like Zambrero or if they’re a small locally owned independent that just arrived last summer, like Black Sheep Bagel or something, we want to make sure they feel like a part of the community very quickly,” Jillson said. 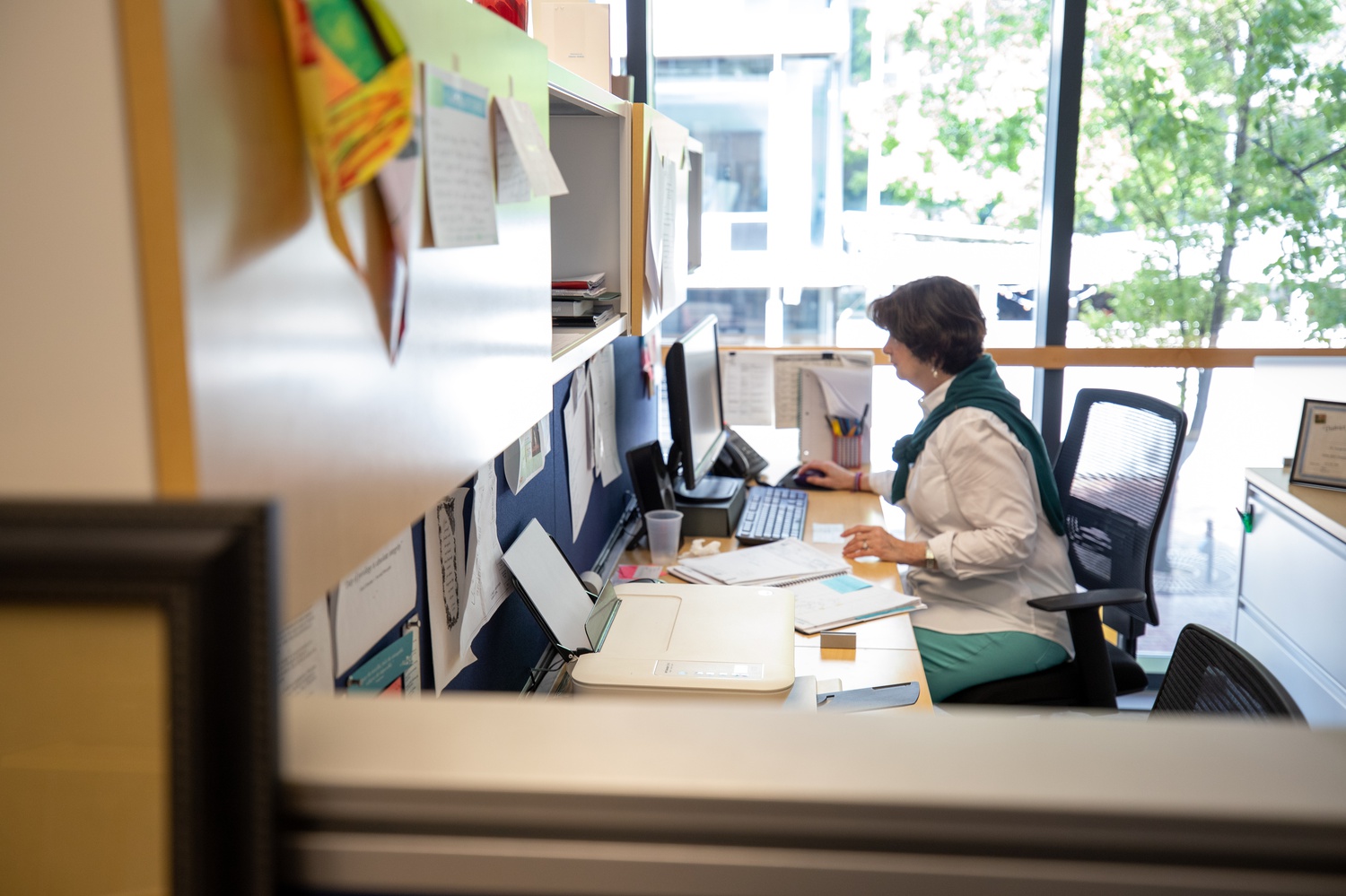 Her title may suggest a singular focus on the Square’s commercial offerings, but Jillson said she believes there’s much more to it than just working with businesses.

Jillson said she thinks it is important to promote a sense of community in the Square. Store owners and Cambridge residents say she tries to make the place welcoming for new businesses and to forge relationships with visitors.

On March 2 — Dr. Seuss’s birthday — she stood in front of the Out of Town News kiosk and distributed green eggs and ham to passersby in celebration of one of the author’s most famous books. For William Shakespeare’s birthday in April 2015, she handed out cake in front of the Harvard Square T Station.

Jillson said one of her focuses as HSBA director has been arranging events that showcase local businesses and draw Cambridge residents to the Square.

Each January, Jillson organizes the “Taste of Chocolate Festival,” a weekend-long event that allows businesses to share their chocolate treats with event attendees. The annual “Some Like It Hot” Chili Cook-Off draws Harvard Square chefs together each February to cook chili for attendees to sample.

In 2016, Jillson collaborated with the Cambridge Arts Council to unveil a new project to beautify the Square — the Utility Box Art Project, which brought together artists from Cambridge to paint electrical boxes in Harvard Square. The initiative resulted in 12 painted boxes featuring a host of images, from depictions of devilish pandas to exhortations to “follow your dreams.”

For Mary Stack, director of the Cambridge Public Forum, these efforts reflect Jillson’s commitment to the Square.

“HSBA and Denise, apart from being sort of passionate and energetic about the cause of the Square and drawing people to the Square like a Venus flytrap, they’re are also great stewards of the space,” she said. “By that I mean it’s not just all about celebrating money — which of course is important for businesses to make money in the Square — but they take care of everybody in the Square.”

In 2017, Jillson noticed that James B. Lappin, a man who often sits outside of the Cambridge Trust Company, was having trouble with his wheelchair. Jillson proceeded to promote an online fundraiser that that eventually raised $13,305 to buy Lappin a new chair.

“Cannot thank you all enough for helping me with the money for my new wheelchair,” Lappin wrote in a note to Jillson at the time. “I love all of you very much.”

Beyond her partnerships with local businesses that form the base of her work, Stack said she appreciates Jillson’s efforts to help Cambridge residents and build a sense of community in the Square.

“Their operation is not just working with businesses but giving back and helping out people that are in need,” she said. “So I think they’re very good stewards of the Harvard Square space. It’s in good hands.”