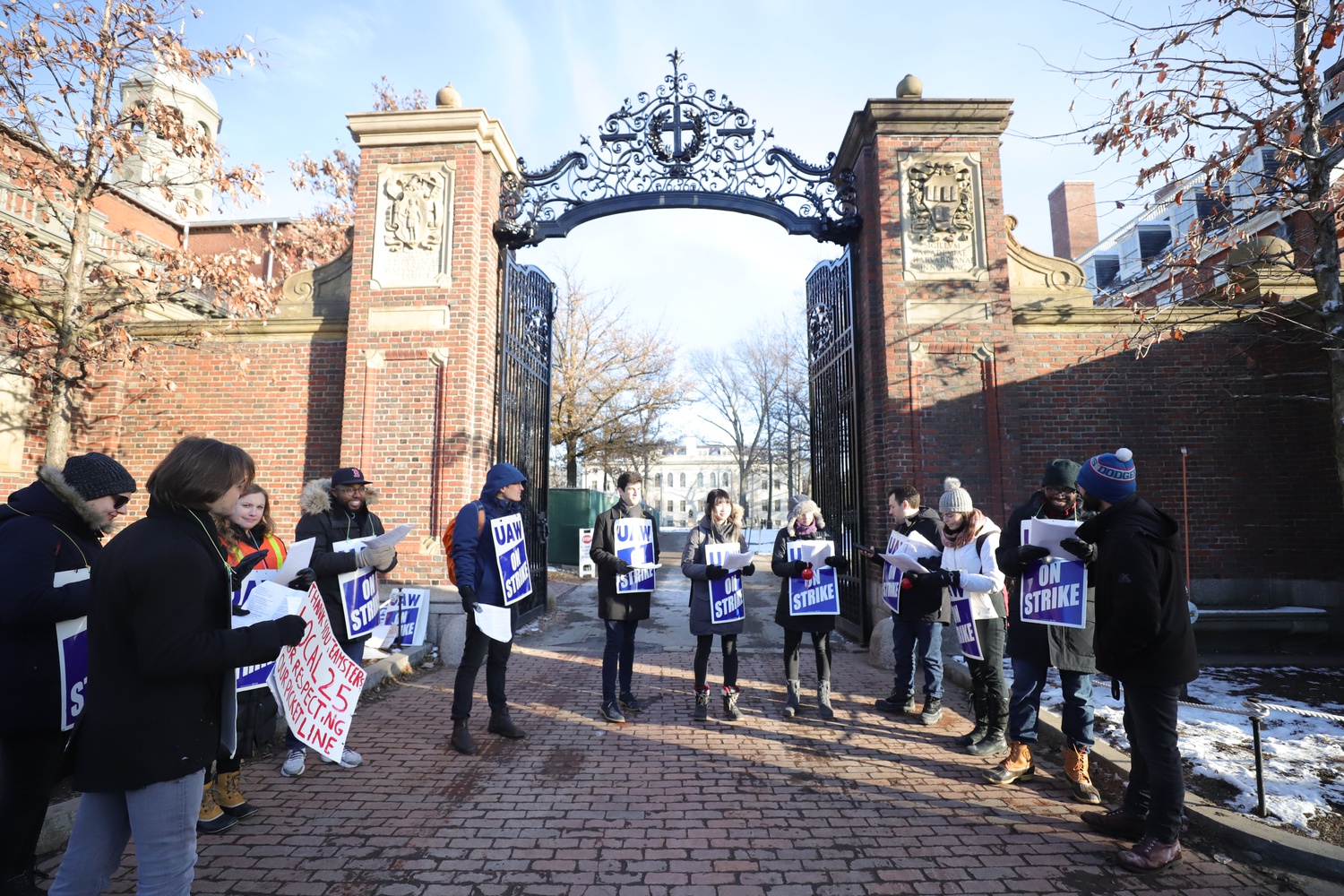 Harvard’s graduate student union and University administrators agreed to six tentative contract provisions during a bargaining session Wednesday — none of which include the three major points of contention at the heart of the union’s more than two-week-old strike.

The session was the two parties’ first meeting since members of Harvard Graduate Students Union-United Automobile Workers began their strike on Dec. 3. Harvard and HGSU-UAW, who had agreed on 12 contract provisions in 28 bargaining sessions prior to Wednesday’s meeting, remain deadlocked on critical provisions, including those related to compensation, health care, and grievance procedures to adjudicate claims of sexual harrassment and discrimination.

During Wednesday’s bargaining session, the University and the union reached tentative agreements related to discipline and discharge, strikes, grievance and arbitration, titles and classifications, an emergency grant, and housing, Harvard spokesperson Jonathan L. Swain wrote in an email.

The agreement on grievance and arbitration establishes a procedure for resolving violations of union members’ contractual rights, allowing union members to appeal to a third-party arbitrator. This contract provision is separate from grievance procedures for allegations of harrassment and discrimination — one of the union demands that remains at issue.

In the agreed upon strike provision, the union will not sanction strikes once the contract is ratified. In exchange, the University will not “lock out” union members from their workplace.

The union conceded to the University’s offer to put $25,000 annually toward an “emergency grant,” which would be distributed to student workers at the union’s discretion subject to Harvard’s approval. The union’s proposal had asked that the University contribute $100,000.

The two groups agreed that, when finalized, the contract will group student workers based on the nature of their work in order to determine their wages, though the union and University remain at odds over the amounts Harvard will ultimately pay each group.

Under one of the newly agreed-upon provisions, student workers living in University housing who decide to pay rent on a monthly basis, rather than up front, will not have to pay an additional fee. The two parties agreed to the provision as a “side letter,” meaning it will not be included in the permanent contract — a decision Harvard argued for in its initial proposals.

Swain wrote that the agreements reached during Wednesday’s meeting marked “progress” in the negotiations.

“The University remains committed to addressing concerns raised during these negotiations and will continue to meet with HGSU-UAW in hopes of reaching a reasonable resolution,” Swain wrote.

“[T]he administration demonstrated more willingness to seriously bargain than they had up until this point,” Kennedy-Shaffer wrote. “We also heard something we have not heard from the administration since bargaining began—that both parties at the table have a mutual interest in reaching an agreement.”

Swain added on Wednesday that the parties discussed each of the three topics central to the strike during the three-hour session but did not come to a consensus.

In response to the union’s proposed contract as of Dec. 2, the University put forth new proposals on Wednesday regarding two of the three issues: compensation and health care.

Kennedy-Shaffer wrote in his email to union members that he was disappointed by the new University proposals. He wrote that he believes they do not represent “substantive changes or a pathway to a contract on compensation, healthcare, and protections against harassment and discrimination.”

Harvard increased its proposed dollar amount for a pool fund to help finance union members’ child care from $275,000 to $325,000 annually. Still, the $50,000 increase falls short of the union’s proposal, which demands the University put $950,000 annually toward a fund that student workers can use to pay for costs related to supporting their children — not restricted to merely the cost of child care.

Administrators also proposed an annual pool fund of $100,000 to reimburse student workers for any medical costs that are not covered under the Student Health Plan.

The union’s Dec. 2 health care proposal calls on the University to help finance the costs of each member’s health care, rather than provide health care coverage through a pool fund. Under the union’s plan, Harvard would be required to reimburse student workers up to $500 due to annual costs related to mental health in addition to funding 90 percent of each student worker’s dental costs.

Harvard also increased its proposed compensation for student workers on Wednesday. The new proposals would give research assistants a 3 percent raise in the first year, followed by a 2.6 percent increase each subsequent year of the contract. For teaching fellows, the University’s new proposal would increase their pay by 2 percent in the first year followed by 2.6 percent each of the following two years. Harvard also offered to raise the minimum hourly rate for research work by one dollar to $16 per hour up from $15 per hour.

These raises do not match the union’s compensation proposal, which demands a 5 percent raise in the first year of the contract followed by 3.5 percent each of the following two years. The union’s proposal sets the minimum hourly wage at either $25 or a 5 percent increase from the current rate, whichever is greater.

Kennedy-Shaffer wrote in his email that the University’s new proposals would not end the strike.

“These minor improvements are not sufficient to settle this contract,” he wrote. “The strike continues as we head into winter break.”

The two parties have not scheduled their next bargaining meeting.

“We are hopeful that the administration will confirm further dates for an accelerated pace of bargaining prior to the start of the next semester,” Kennedy-Shaffer wrote in his email.

Roughly 100 union members and supporters gathered for a rally in Harvard Yard before escorting the union’s bargaining committee to their meeting with administrators, which took place at an administrative office building in Harvard Square.

History Ph.D. student Laura Correa Ochoa said in a speech at the rally that simply scheduling the bargaining session represented a victory for the union.

“I just want to start by saying that the bargaining meeting we landed today is not coming out of the generosity of Harvard’s heart,” she said. “This is a reflection of us being out here for three weeks and all the disruption we've caused, and I think we should be proud of that.”

“You won us this session,” HGSU-UAW bargaining committee member Jennifer K. Austiff added in her speech.

Before the bargaining session, Music Ph.D. student Samantha C. Jones said in an interview that she was “hopeful, but not too hopeful” about the results of Wednesday’s negotiations.

The union has not announced how the bargaining session will affect the strike. HGSU-UAW has previously said that the strike will not cease until the University and the union agree to a contract.

Though the fall semester concludes with the close of finals period on Thursday, union members have stated they are prepared to strike into the spring semester.

Human and Evolutionary Biology graduate student Evelyn J. Jagoda said in an interview that she expects union picketers to continue pressing the University until they reach a satisfactory agreement.

“If we don't get the contract we deserve and want today, we are not going to stop,” she said. “This will not be the end. We will be out here until we get what we deserve.”

“No matter what happens we're going to keep the pressure on the administration and we're not going anywhere because they think they can wait us out but they can't,” he said.