When the real estate firm Asana Partners arrived in Harvard Square in 2017, it did so with a simple message to the community: It wouldn’t be changing much.
By Jasper G. Goodman and Hannah J. Martinez 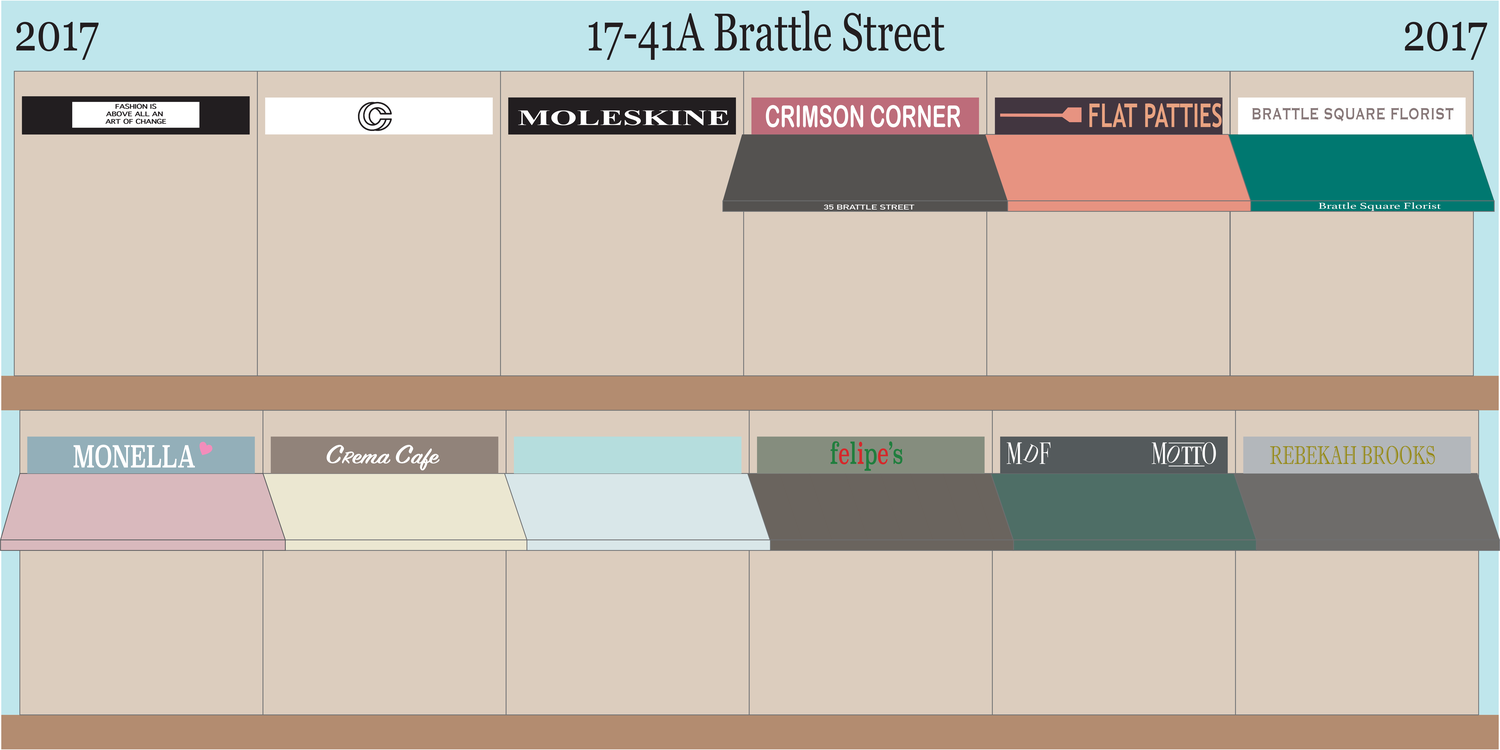 When the real estate firm Asana Partners arrived in Harvard Square in 2017, it did so with a simple message to the community: It wouldn’t be changing much.

To an outsider, it would seem this promise has been mostly upheld. The two Brattle Street buildings that Asana paid a whopping $108 million for are still intact — and most businesses in their ground-floor storefronts are selling many of the same items that they were when the company came to town.

But at several locations, the faces behind the counter have changed. Sky-high rents on Brattle Street have forced several small businesses out, sparking concerns among community leaders and earning Asana mixed reviews from proprietors and patrons alike.

Asana, a Charlotte, N.C.-based real estate investment company that owns swaths of retail property around the country, purchased 1-8 Brattle St. and 17-41A Brattle St. from the Dow and Stearns family trust in December 2017. The sale came two years after the family trust sold off its properties at the Abbott Building on John F. Kennedy St. and Brattle St. to another national real estate group.

“We’re not trying to create a mall here,” one of Asana’s founding partners, Sam E. Judd, told the Boston Globe at the time of the sale.

Since the company came into the Square, though, a steady stream of local businesses have closed their doors, most citing rising rent costs.

When Asana bought the Brattle St. buildings, 11 of its ground-floor storefronts housed locally-owned businesses. Less than three years later, five of those local businesses have been shuttered or moved — and all but one of them have been replaced by national chains.

‘The Rents are Unsustainable’

The trend of rising property costs in Harvard Square was hardly created by Asana. The assessed value of Harvard Square property almost doubled between 2012 and 2017, and closing Square businesses have been complaining about rent spikes on the way out for years.

While the Brattle St. properties were owned by the Dow and Stearns family trust, “they had had an incredibly strong record of support” for local businesses and nonprofits, according to Harvard Square Neighborhood Association President Suzanne P. Blier.

After Asana took over the properties, local business owners who left the properties said rents skyrocketed when their leases ran out. Black Ink, Crema Cafe, and Flat Patties all departed the Square citing a breakdown in negotiations or unsustainable rent hikes.

MDF Motto, a jewelry store, moved to a new location in the Square and Beyond — a shoe store formerly known as The Tannery — closed up shop in Cambridge.

“They’re increasing rent to a level that is not tenable for small businesses,” said Theodora M. “Theo” Skeadas ’12, the executive director of the local business group Cambridge Local First. “The rents are unsustainable.”

So far, no local businesses have replaced the shops that have left, though Fóumami, a Boston-based Asian sandwich shop, is expected to take over in the Flat Patties location.

Beyond has been reconstructed as a Patagonia store, Crema was replaced by the Australian coffee chain Bluestone Lane, Black Ink’s shop will soon re-open as Topdrawer — an international retailer selling gifts and travel accessories — and MDF Motto’s location is now occupied by a Ray-Bans store.

“I think it really changes the character of the Square and, especially for Cambridge residents, what kind of place they think it is — a place that they see for themselves … that caters to everyone, or if it’s only a place that caters for people who can pull in six figures,” first-term city councilor Jivan G. Sobrinho-Wheeler said.

Thomas J. Brush — who co-owned Crema and Flat Patties before they closed their doors and continues to operate Felipe’s Taqueria — said he doesn’t fault the company for seeking high rents given the fiduciary responsibility it has to investors. The Felipe’s lease was negotiated before the firm took over.

“They’re going to lease to whoever pays the top dollar,” Brush said. “And I respect that. That’s the way life is.”

Asana is financed by an array of private equity investments, including public and private pension funds, endowments, and insurance companies.

Brush said the company has been helpful in allowing him to expand the Felipe’s roof deck and has made improvements to the buildings.

“They’ve been great to work with,” he said.

One Asana tenant, who spoke on the condition of anonymity in order to protect their relationship with their landlord, said communication with the company has been limited, and that the firm has been “very aloof.”

The coronavirus pandemic, which has led to an economic calamity that has shuttered businesses across the country and created a mass spike in unemployment, has cast a cloud of uncertainty over the future of many small businesses in Cambridge.

Asana has not yet offered rent reduction amid the pandemic, according to one tenant, though negotiations may differ from tenant to tenant.

In Atlanta, another Asana tenant described a similar story. Ming Yang, the owner of Richard’s Variety Store said she has been contacted by the firm’s lawyers after not paying April’s rent. Yang said she has been unable to afford the payment due to the economic downturn caused by the coronavirus.

She said her store was scheduled to move out of its current location and into a nearby mall by the end of April, but she claims it has been unable to do so due to the virus. She attributed the move to rising rent costs.

“I think Asana is out of touch,” Yang said.

Asana did not respond to a request for comment.

Some area landlords are allowing for increased flexibility on rent as Massachusetts operates under a stay-at-home advisory with only essential businesses open.

John P. DiGiovanni, the president of the Harvard Square Business Association who owns property around Cambridge, said “the vast majority” of his restaurant and retail tenants are not currently paying rent. He said he has not sent any default notices to local tenants.

The University, which owns a significant amount of Square real estate, has been handling negotiations with their Square tenants on a case-by-case basis, according to Vice President for Campus Services Meredith L. Weenick ’90.

“We’ve been in contact with all of our retail small business tenants and continue to work to address their individual concerns and needs,” Weenick wrote in an emailed statement. “Depending on their individual circumstances, Harvard has offered different rent-relief options.”

Weenick added that the University has lifted mandatory minimum operation hours for its commercial tenants.

Denise A. Jillson, the executive director of the Harvard Square Business Association said Asana’s relationship with HSBA has been “very good.” Chris R. Dalton, a director of asset management for Asana, sits on the Association’s board and often flies in to attend meetings.

Jillson said she is “very confident” that the percentage of locally owned businesses in the Square will remain at around 70 percent, where she said it has sat for the last 15 years.

Richard B. Peiser, a professor of real estate development at the Harvard Graduate School of Design, said Asana opting to bring in more national tenants is unsurprising.

“It’s just a fact of retail life that every landlord wants the strongest tenants they can get,” Peiser said. “When you get the national chain stores … the value of the shopping center is significantly higher than it would be with tenants who do not have national credit ratings for the very fact that in downturns like the ones we’re seeing in the COVID crisis, the mom-and-pops are the first ones to go under.”

‘Not That Much We Can Do’

The closure of several of the Brattle St. businesses, and construction being done on the Abbot Building, which is owned by Regency Centers, has sparked debate among city leaders and residents about how to best preserve independent proprietors in the Square.

Brush, the Felipe’s co-owner, said that he, too, laments the loss of businesses like Black Ink. But he said he faults the city for not previously enacting stricter zoning regulations.

Sobrinho-Wheeler, the city councilor, said he supports zoning initiatives that prop up local businesses, but he cautioned that their regulatory power can be limited in scope.

“There’s only so much you can do with zoning,” he said. “We, at the end of the day, can’t choose which tenants [are] there. We can’t control what the rents are like.”

Likewise, Skeadas said that Cambridge Local First, which represents more than 500 businesses from around the city, is limited in its ability to prevent local turnover in Harvard Square.

“There’s not that much we can do, realistically,” she said. “We live in a relatively open-market system, and things are sold to the highest bidder. As a small non-profit, we can do some advocacy, but we can’t change the rules of the market system.”

She said she views zoning as “an important tool in the toolkit,” but added that she does “not attribute this change predominantly to inadequate zoning.”

Longtime Harvard Square resident Christopher Mackin, who sits on the board of the Harvard Square Neighborhood Association, said he backs the idea of the city “building the financial resources and institutions” to compete in the real estate market with a land trust.

“They’re no better and no worse than a dozen others who could’ve taken their place. The problem is not Asana,” he said.

Blier said she hopes the economic recovery after the pandemic will be advantageous to local businesses.

“The whole country — the whole world, really — is going to be reshaped through the circumstances of this pandemic,” she said. “We have a choice — all of us — about how we respond to it. And hopefully we can help to build a much stronger local base and economy out of it that will end up being even more vibrant than it was before.”

—Staff writer Hannah J. Martinez can be reached at hannah.martinez@thecrimson.com.