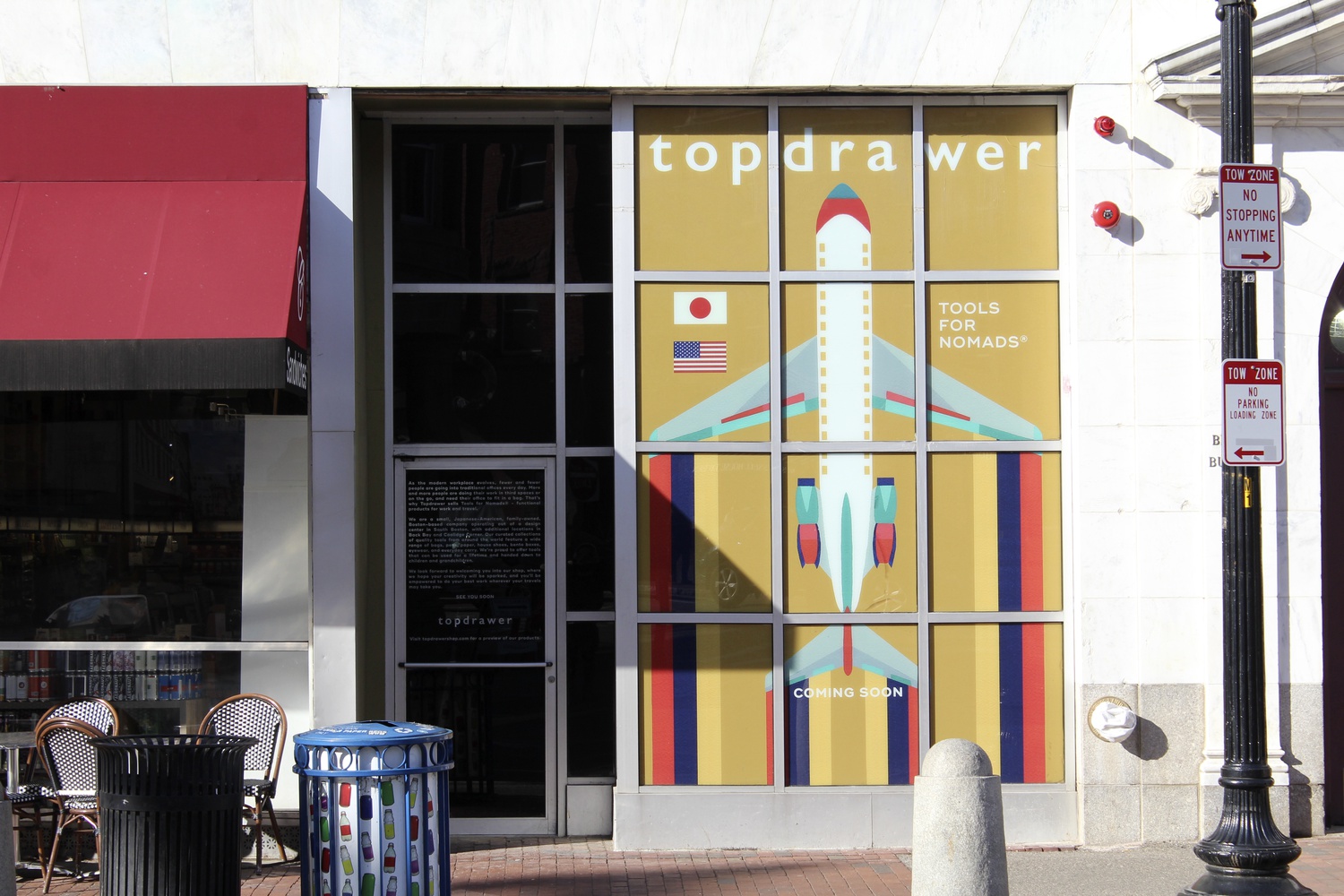 Topdrawer, a family-owned Japanese-American store for everyday accessories, is opening this spring in the Square in the space previously occupied by Black Ink. By Aiyana G. White
By Ellen M. Burstein, Crimson Staff Writer

Topdrawer — a lifestyle accessory store geared toward “creative nomads” — is set to open in Harvard Square in April.

The Japanese-American company sells sustainable tools that “can be used for a lifetime and handed down to children and grandchildren,” according to its website. The store’s wide-ranging inventory includes backpacks, notebooks, and sunglasses, designed to empower their users to be “creative” and “productive.”

The upcoming opening marks Topdrawer’s 14th location worldwide and its third in Massachusetts. It will join existing stores in Boston and Brookline.

Denise A. Jillson, the executive director of the Harvard Square Business Association, said Topdrawer’s offerings are designed to mimic what one might find in the “top junk drawer” in their house.

Jillson added that her organization was “looking forward” to having Topdrawer in the Square.

Topdrawer will join a number of stores that have opened or will open in Harvard Square this year, including bubble tea chain Kung Fu Tea and sandwich shop Fóumami.

Peter Dunn — president of Itoya Topdrawer Corp., Topdrawer’s parent company — said the company chose Harvard Square to open a store because many store employees cited neighborhood as one of their favorites.

“We have a huge long-term relationship with Harvard Square,” Dunn said. “We think our people are here, you know, people that appreciate these types of products and use them.”

Topdrawer will replace Black Ink, a stationery store that shuttered in December after nearly two decades in operation.

Black Ink’s departure due to rising rent prices sparked a wave of criticism against Asana Partners, the North Carolina-based real estate company that owns the property. Before Black Ink’s closing, the store launched a “Dear Asana” letter-writing campaign, placing large sheets of paper in the store for customers to write messages to the company.

Dunn said he learned of the circumstances of Black Ink’s departure after the store decided to close, adding that the “rent is expensive” at the property.

“There’s no question it’s probably the most expensive we pay in the country,” he said.

Paige G. Coolidge ’21, co-founder of Fig. Magazine, a campus fashion publication, said she felt the plethora of lifestyle stores in the Square may reflect a growing trend toward “fad-ish” commerce.

“I think that it’s almost ritualistic the way that these sleek and chic shops are popping up in Harvard Square and on other college campuses,” she said.

However, Coolidge added that she would be interested in shopping at Topdrawer.

“I would check it out for sure,” she said.