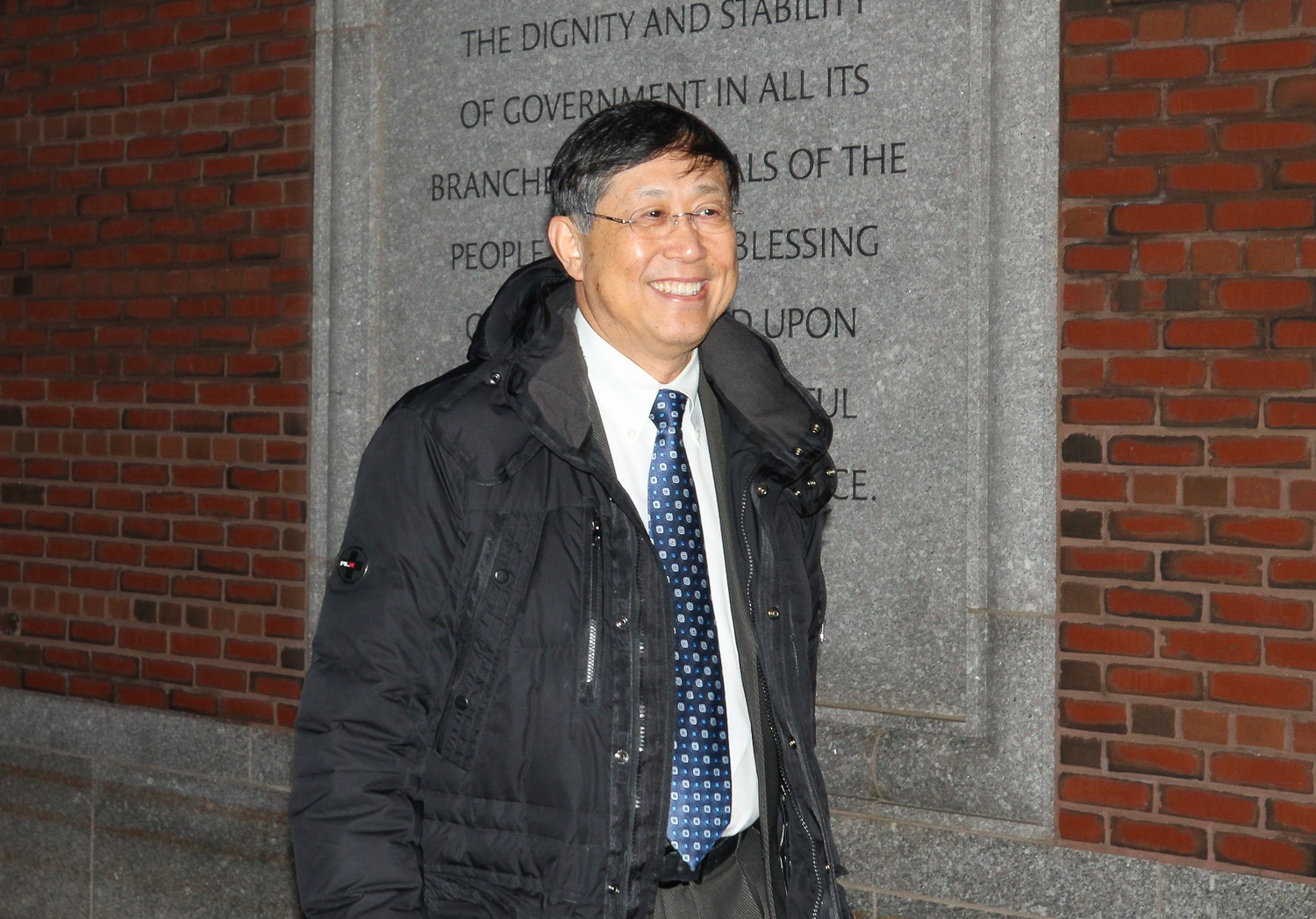 Federal prosecutors alleged Brand accepted over $1.5 million in kickbacks in exchange for recruiting Zhao’s two sons to Harvard’s fencing program. In 2020, Brand and Zhao were arrested and indicted on bribery charges, and in June 2021, a federal grand jury added a charge of conspiracy to commit honest services wire fraud.

But both men were acquitted after more than two weeks of trial, following a successful effort by defense attorneys for Zhao and Brand to portray the almost $500,000 Zhao used to erase Brand’s debts as personal loans that Brand intended to pay back with anticipated inheritance money.

Jurors came to the unanimous verdict after just over six hours of deliberation.

Immediately after the decision was announced, Zhao broke into a wide smile as his attorney William D. Weinreb patted him on the shoulder. Brand shook his head in relief and hugged each of his attorneys, R. Matthew Rickman and Douglas S. Brooks.

“I just want to thank my family for the last couple of years,” Zhao told reporters after proceedings concluded Wednesday. “I’m very happy.”

In a government statement released soon after the acquittal, U.S. Attorney Rachael S. Rollins wrote that “although we fundamentally disagree, we respect the verdict.”

The government's case relied heavily on self-described “middleman” Alexandre Ryjik, a fencing coach for Zhao’s sons who said he facilitated the transfer of bribes between Zhao and Brand. Brooks was able to cast doubt on Ryjik’s testimony in his closing remarks Tuesday, calling the key government witness “a liar and a criminal.”

“All of these holes add up, and they create a sinking ship of reasonable doubt,” Brooks told jurors Tuesday.

Throughout the trial, the defense called 11 witnesses to testify and presented hundreds of evidence exhibits to show that Zhao’s sons — Eric Y. Zhao ’18 and Edward Y. Zhao ’21 — deserved their acceptances to Harvard based on merit. The Zhao brothers testified on Monday, and their high school and college transcripts were displayed for the jury, as well as their full Harvard applications.

“The jury saw through Alex Ryjik’s lies,” Brooks told reporters after the verdict. “I think the jury recognized how incredible Eric and Edward Zhao were, and I think that made the difference.”

Attorneys for Brand and Zhao sought to demonstrate that neither of the defendants had motive to participate in the alleged bribery scheme and that none of the transactions were hidden from the public.

Brooks said during Tuesday’s closing remarks that no one executing a bribery scheme would have approached it the way the two men did, referencing the extensive paper trail documenting Brand and Zhao’s transactions.

“This would be the equivalent of going to rob a house, taking off your gloves, sticking your bare hands into a vat of black ink, and when you’re in that house, putting out your hands up against every white wall or table in the house,” Brooks said. “There could not be more fingerprints on this transaction if they tried.” 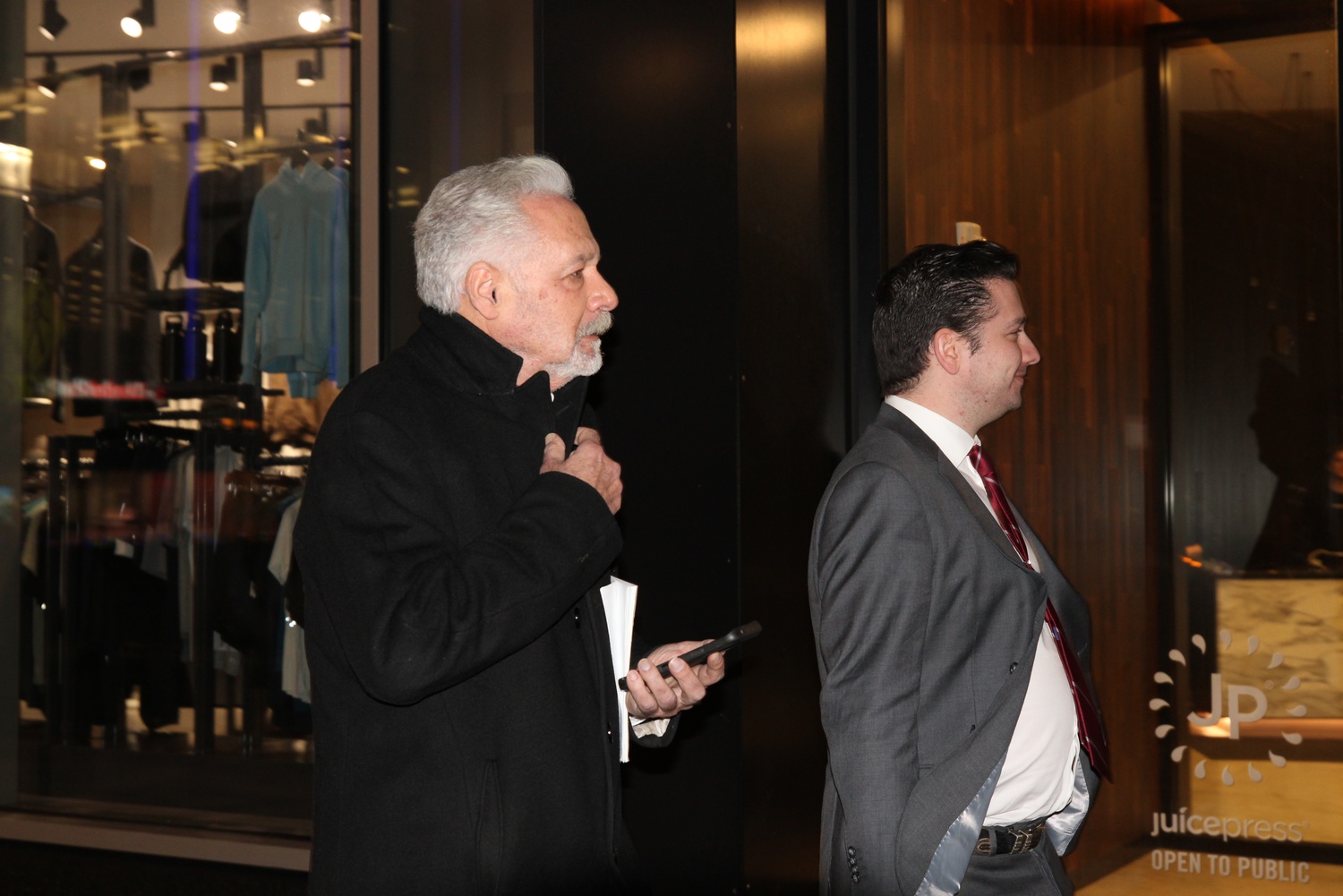 The acquittal comes on the heels of the high-profile Varsity Blues scandal that swept the nation in 2019 and ignited a global conversation on corruption in college admissions. As part of the scheme, 33 parents — including high-profile executives and celebrities — paid William “Rick” Singer, the CEO of a college admissions prep company, more than $25 million to inflate their children’s test scores and bribe admissions officers.

Rollins wrote in a statement that she was proud of her legal team’s work, adding that the case “exposed such profound levels of privilege, entitlement and wealth abusing the college admissions process.”

“Their efforts were not in vain,” she wrote. “This case and all of the college admissions prosecutions have led to significant reforms at colleges and universities across the country.”

Defense attorneys sought to show that no one was harmed by Zhao and Brand’s actions, and that the case had no victims. Weinreb said during the tenth day of trial that in all of the Varsity Blues cases, the judges ruled that there was “foreseeable economic harm done to the schools.”

“Once they were admitted, Eric and Edward paid full tuition to Harvard. They fenced all four years. Their family donated over $300,000 to Harvard generally and the fencing team,” Brooks told jurors on Tuesday. “Does that sound like Harvard was victimized to you?”

After the verdict was announced Wednesday, Weinreb told reporters, “We’re grateful to the jury for their service and thank them for doing justice in this case.”

The federal investigation into Zhao and Brand followed a 2019 Boston Globe report that Brand sold his Needham, Massachusetts home to Zhao for almost twice its market value.

The Boston Globe story prompted Faculty of Arts and Sciences Dean Claudine Gay to launch an internal investigation into Brand’s conduct later that day, which ultimately led to his firing for violating Harvard’s conflict of interest policies.

In addition to scrutinizing the 2016 house sale, the trial also delved into Brand’s short-lived charitable organization, the Peter Brand Foundation, which prosecutors alleged had been used to funnel $100,000 to Brand from a non-profit run by Ryjik.

Ryjik, a key government witness who claimed to broker a scheme between the two men, testified on the second day of the trial that he used his charity, the National Fencing Foundation, to facilitate the transfer with the understanding that the payment was to be used to secure admission for Zhao’s eldest son.

Brand’s wife, Jacqueline Phillips, testified on the eighth day of trial that the couple sold their Needham home to Zhao for what she believed was an accurate price, and that the foundation had been solely intended to direct grants to charitable causes.

“I took nothing from the foundation, not a dime,” she said during her testimony last week.

Brand thanked his wife in an impromptu press conference with reporters outside the courtroom Wednesday, appearing visibly relieved following the verdict.

“This is probably the greatest win in my lifetime,” Brand said.