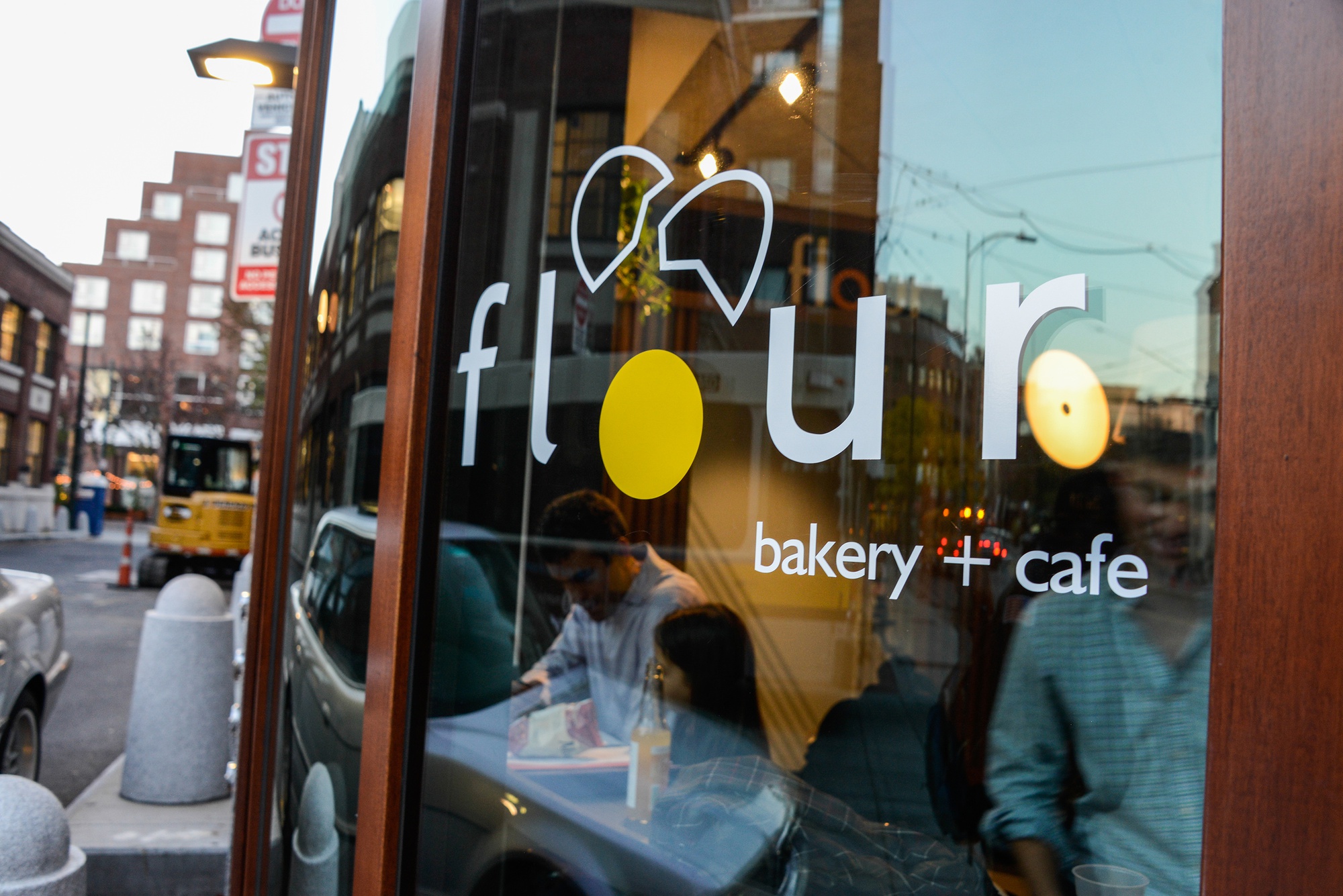 Baking, Not Business School: A Conversation with Joanne Chang

Joanne B. Chang ’91 estimates that she eats an entire loaf of banana bread every day.
By Emma C. Scornavacchi

Joanne B. Chang ’91 estimates that she eats an entire loaf of banana bread every day. At each of the five Flour Bakery + Cafe locations in the Boston area, the staff in charge of trimming banana bread loaves in the morning know to save the cut-off ends for Chang. As she travels to each Flour location throughout the course of her day, Chang snacks on these leftovers. This is just one of many sweet perks of owning a successful bakery chain.

Chang opened the first Flour in Boston’s South End in September of 2000, and its latest installation is right in Harvard Square at 114 Mt. Auburn St. Though grounded in the simplicity of its delicious pastry selection, Flour also serves sandwiches, salads, coffee, tea, soups, and more to its steady flow of customers. The bakery’s colorful and fun decor is a backdrop to people working on laptops, sipping coffees, and chatting at small, circular tables. 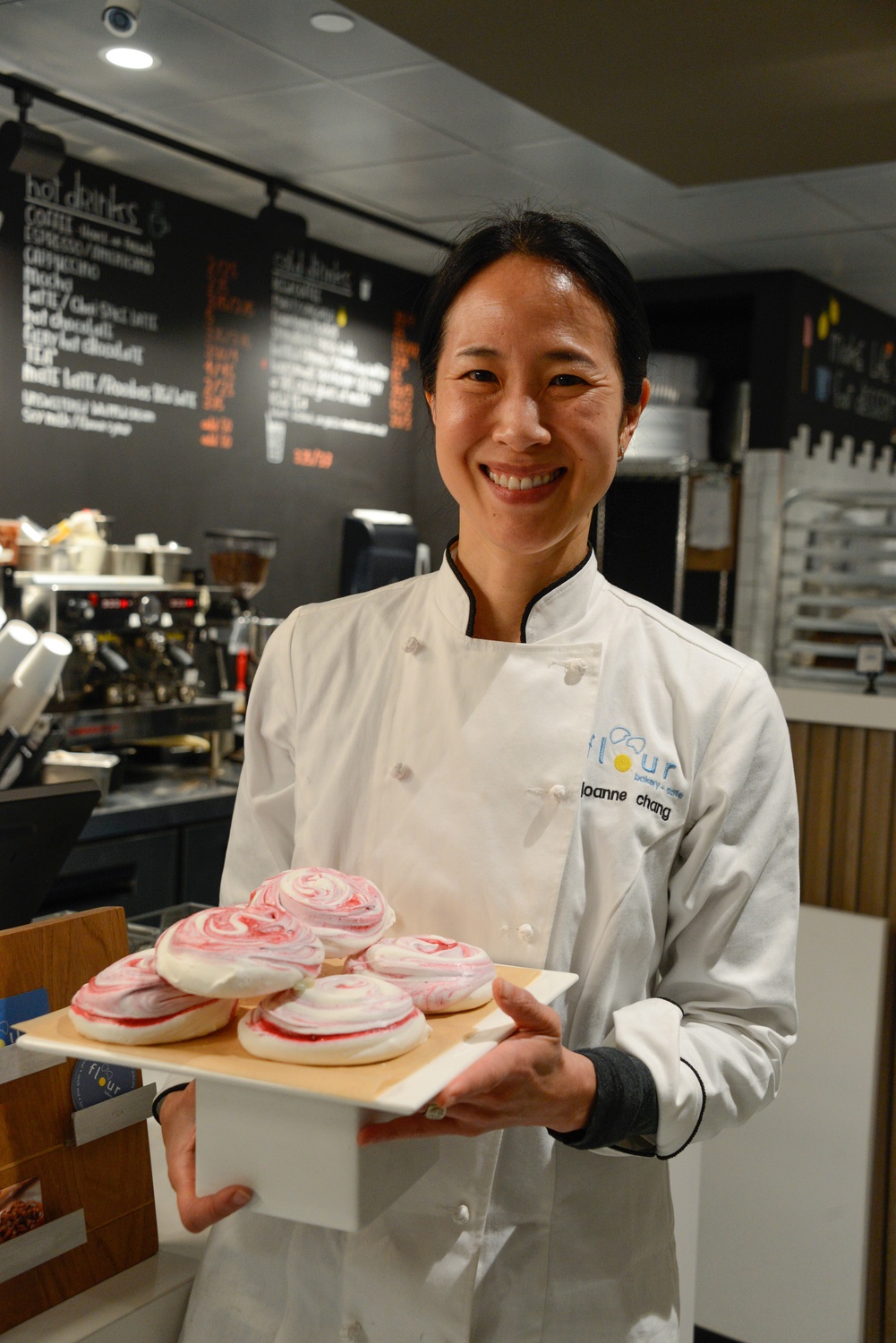 Joanne Chang, founder of Flour, poses with some of her baked goods. By Xenia O. Viragh

I sit down with an iced coffee on a Saturday afternoon to talk with Chang in Flour’s new Harvard Square location. Only four days after its opening, the whimsically decorated cafe is so busy I need to lean in close to hear Chang’s story—an unexpected one for someone in her field of work.

Chang graduated from Harvard in 1991 with a degree in Applied Mathematics and Economics. Upon graduation, she pursued a path popular with Harvard students both then and now: consulting. After spending two years at a management consulting firm called Monitor Group, Chang decided it was time to move on. 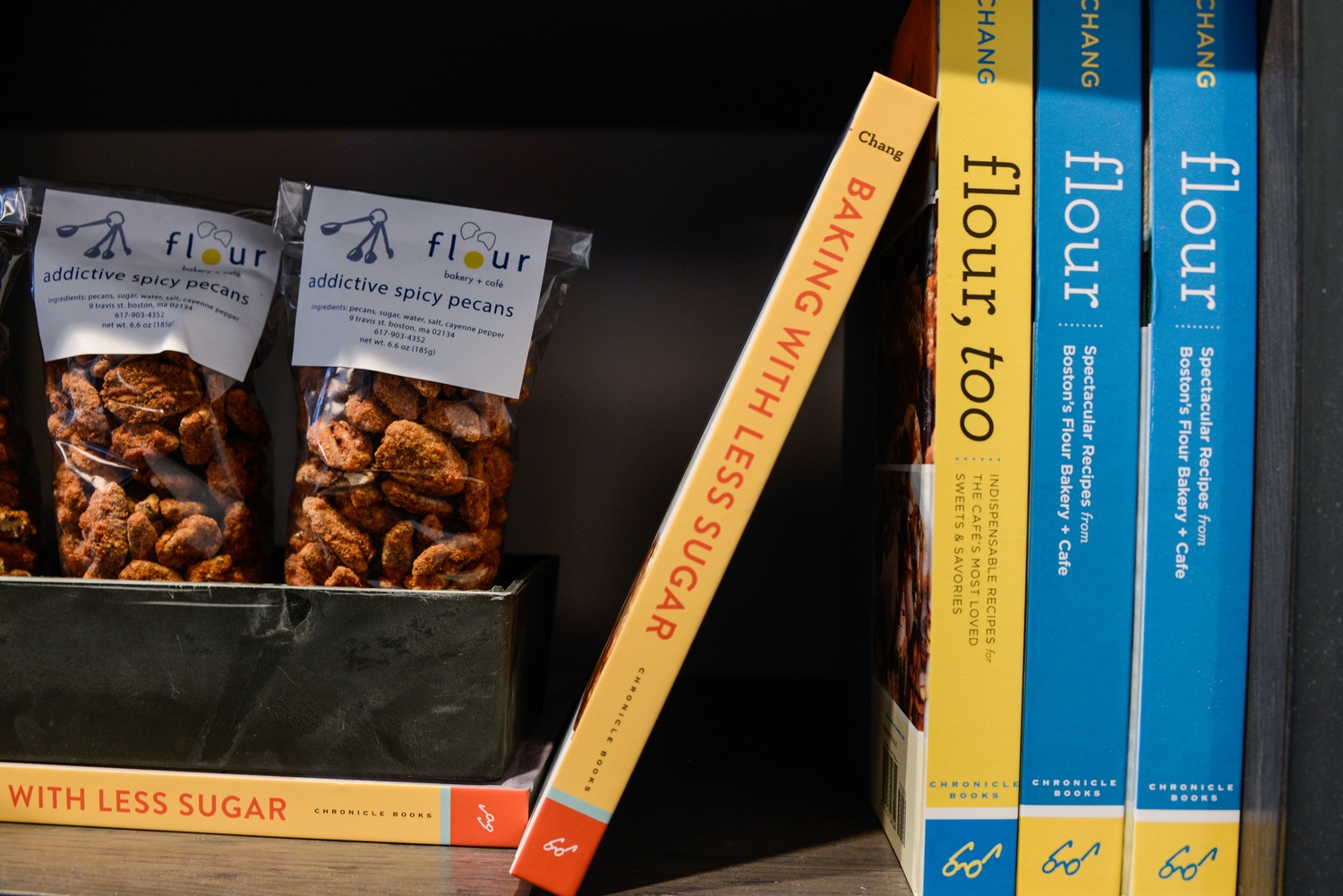 “Everybody was applying to business school,” Chang says. “I didn’t want to go to business school.” She had a feeling she should be doing something completely different. Thinking back to the days when she used to bake chocolate chip cookies for the Leverett House Grill, Chang wondered if she should try a restaurant job.

After Chang saved up enough money working for Monitor, she had the freedom to try a less lucrative field. She remembers thinking: “Now I’m making more money than I should at 23 years old, but [this job is] still not enough to make me feel satisfied.”

So Chang went with her gut. Leaving behind the world of consulting, Chang entered her first restaurant job at Biba restaurant in Back Bay at a salary of $7 per hour, a steep decrease from her salary at Monitor. Still, something clicked. “I fell in love with being in the kitchen,” she says.

Chang never quite left. She filled many roles in various restaurants and bakeries and had a brief stint in New York, before deciding it was time to own her own place back in Boston. 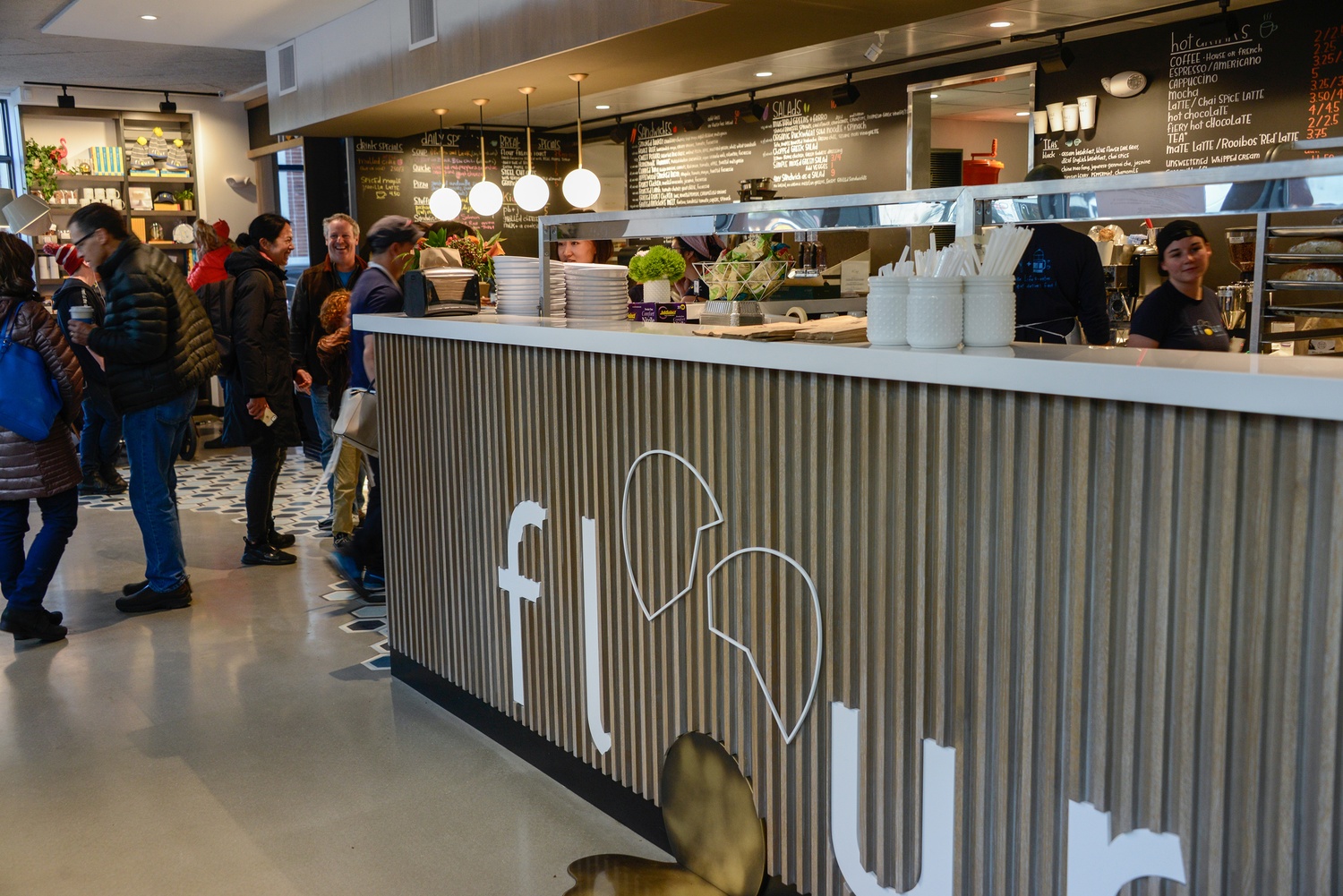 Now, Flour’s impressive expansion speaks to its success, but when Chang was first starting out, she remembers her peers’ skepticism. At her five-year Harvard reunion, Chang recalls being asked a question to the effect of “What’s it like to not have a real job?” after mentioning she had gone into the restaurant business. “This is a real job!” Chang exclaims, laughing.

Since that reunion, Chang has stepped even further into the very real world of restaurants. Her job title may be “Pastry Chef/Owner,” but Chang has also written three cookbooks, opened a Chinese restaurant with her husband, taught pastry classes, been featured in countless renowned cooking magazines, and won a James Beard Award for outstanding baking in 2016.

Though she has found her passion in cooking, Chang still nods to her consulting background as an important starting point. “Consulting is looking at a problem and trying to break it down into solvable parts,” says Chang. “That’s basically what running a business is.”

Chang also notes that managing a business is addressing all the things an untrained eye might not even recognize as problems.

“From your point of view, [it] probably looks like it’s working out,” Chang tells me, surveying the bakery with watchful eyes. “From my point of view, I see 20 things that are driving me crazy that I have to figure out how to solve.”

Curious, I ask what those problems might be. Chang directs my attention to the line forming by the pastry counter. “The woman with the sequins is in the right place,” Chang says, nodding approvingly. “The woman in the green is in the right place.” Another approving nod. The third customer makes Chang throw up her hands. “Now that guy’s in the wrong place!” This line-formation problem is high on Chang’s list of things to fix. A retail table to direct customers in a loop formation will do the trick, she thinks. 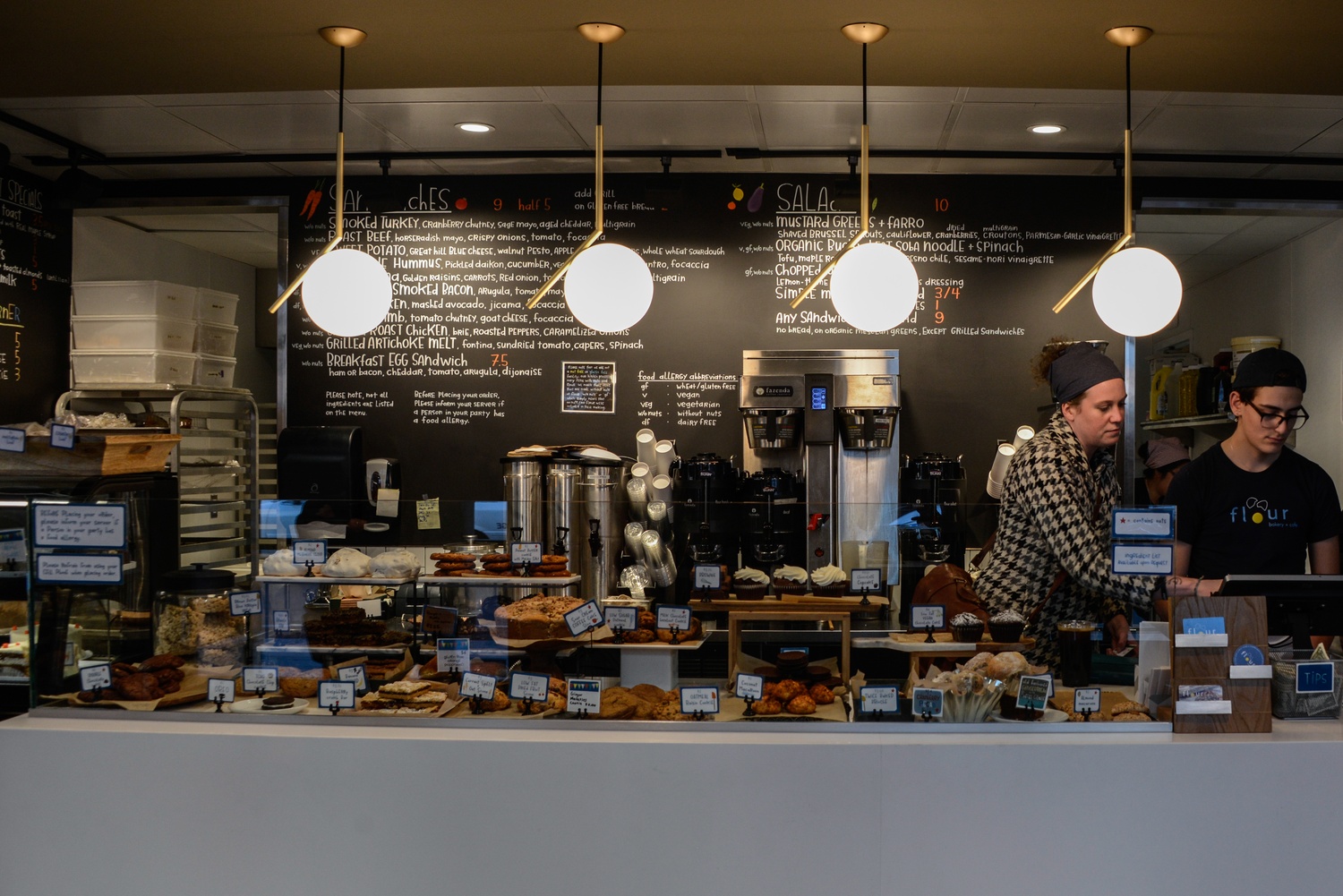 On the other side of the counter, one of the brand new staff members has just run his hands through his hair. “Now he’s not washing his hands!” Chang exclaims, observing the employee from across the cafe.

She excuses herself, gets up, and ducks behind the counter to tap him on the shoulder. “I just told him to wash his hands,” she says upon return, and I worry I got him in trouble. “Oh no!” Chang assures me. “He’s brand new.”

Despite her experience, Chang says it can still be a challenge when things don’t go quite as planned. She admits she takes everything personally, from a staff member being rude to a customer, to a sandwich coming out cold.

“You’re taking the things you love and presenting them to the world and saying: ‘I hope you love them too!’” says Chang. Challenges aside, though, Chang says she’s constantly inspired by the team at Flour, and that the people she works with are the best part of her job.

When asked about advice for those who don’t know what to do with their lives, Chang is hardly ruffled by the question. As someone who left a secure job on a gut feeling, she clearly has gotten this question a lot.

Her answer about a dream job is instinctive: “It’s what you think about when you don’t have to be thinking.”