Harvard’s campus is replete with the names of prominent historical figures who were essential to the development of the University and Massachusetts. These individuals and their generational legacies are honored through plaques, professorships, buildings, and streets that form the face of Harvard.

But many last names familiar to any Harvard student are also associated with a darker legacy.

A landmark University report released last week found that at least 41 prominent Harvard affiliates enslaved Black and Indigenous people — and many others propagated discrimination and racism through their leadership and scholarship at the University.

The report, produced by the University’s Presidential Commission on the Legacy of Slavery, identified more than 70 Black and Indigenous people enslaved by Harvard faculty, staff, and leaders — some of whom lived and worked on campus. Its appendix included a list of known slave owners, detailing how they are memorialized on campus.

Here are the houses, dormitories, professorships, streets, and towns that memorialize the legacy of slavery and discrimination at Harvard.

Harvard’s residential housing system is a quintessential part of the undergraduate experience. Upperclassman students at the College often introduce themselves to peers with their name, class year, and house affiliation. When they do, just shy of half of them identify last names associated with legacies of slavery, racism, or discrimination.

Governor John Winthrop, a founding member of Harvard who served on the University’s second-highest governing body, enslaved at least seven individuals and ordered for 17 prisoners from the Pequot War to be sold as slaves in Bermuda. Foundational to the development of the Massachusetts Bay Colony, he served multiple terms as its governor and lieutenant governor.

Winthrop House, an upperclassman residence, is dedicated to Winthrop and his descendent, also named John Winthrop. 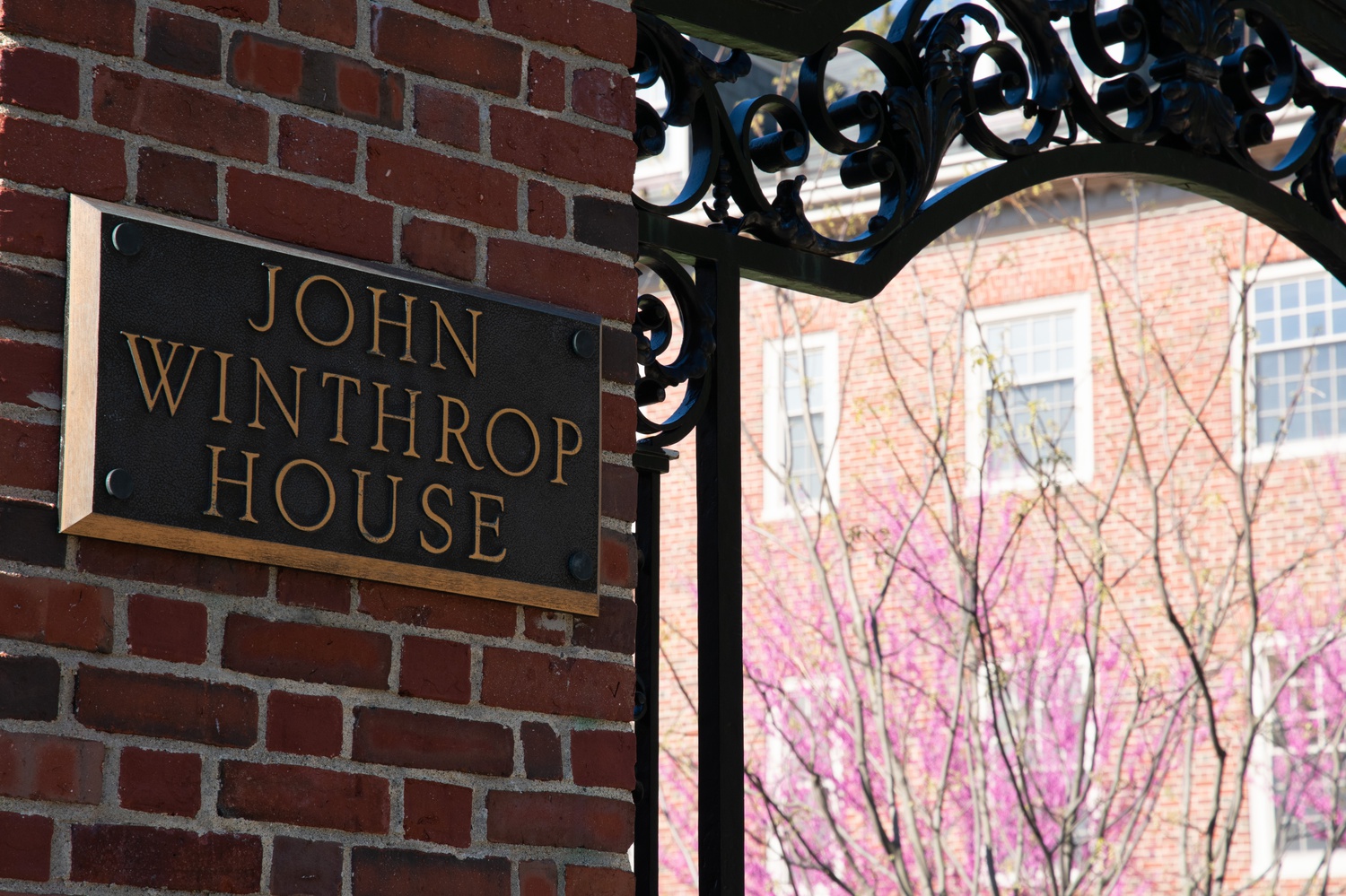 Winthrop, the governor’s descendent, owned two slaves known as George and Scipio. He served as a professor of Mathematics and Natural Philosophy from 1738 to 1779 and as acting president of Harvard for a year.

Mather House, another one of Harvard’s 12 residential houses, is named after Increase and Cotton Mather, who both owned slaves — identified as “The Spaniard,” Onesimus, Obadiah, and “a little boy” in the report’s appendix.

Graduating from the College in 1656, Increase Mather later served as Harvard’s president and rector. His son, Cotton Mather, was a member of Harvard’s top governing boards, serving first on the Harvard Corporation and then the Board of Overseers. 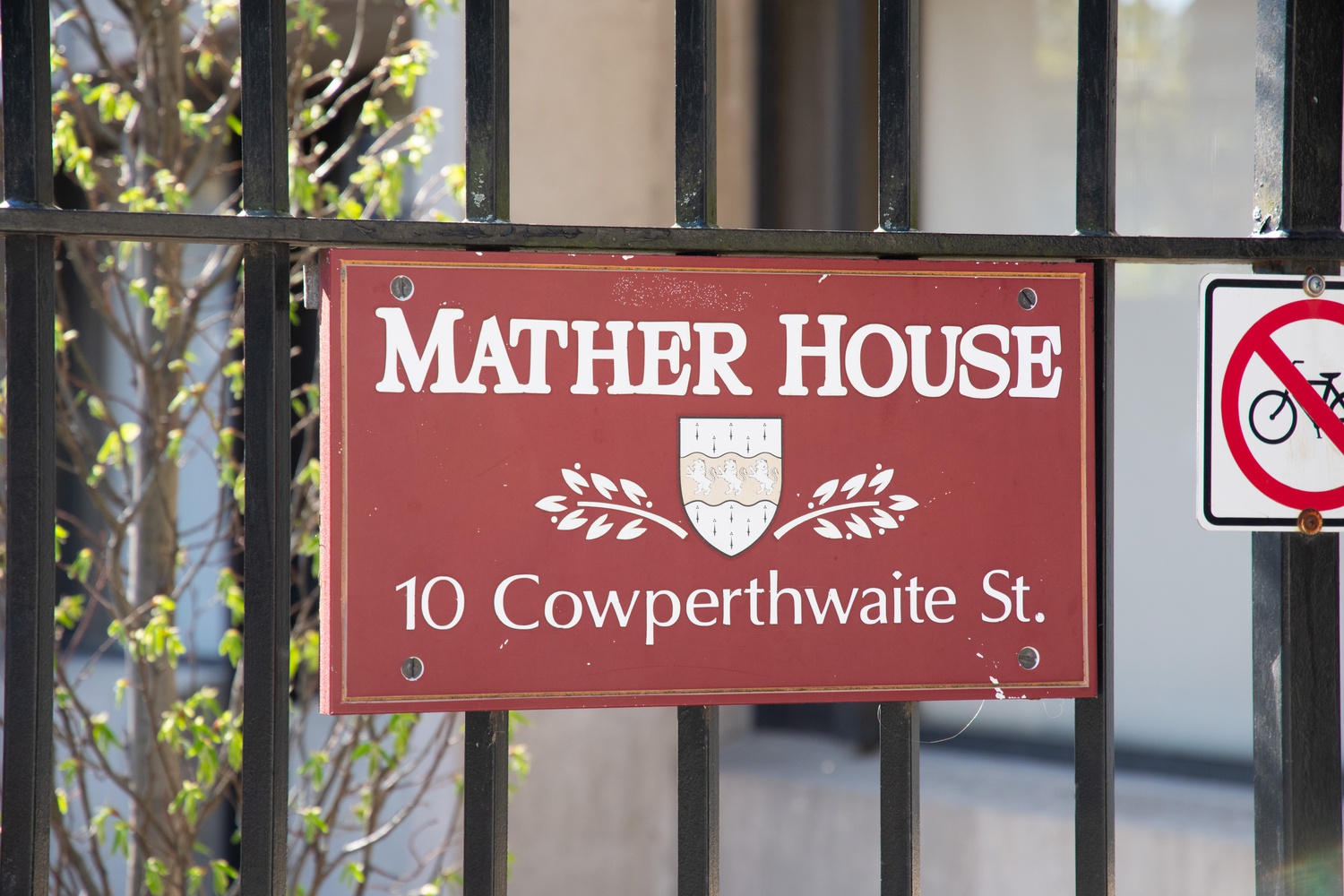 In 2020, four Mather House residents wrote a petition calling on Harvard to change the House’s name in light of the family’s ties to slavery that garnered more than 300 signatures. Though they acknowledged the Mathers’ slave-ownership, then-Faculty Deans Michael D. Rosengarten and Christie McDonald said there were no plans to change the house’s name.

Leverett House and the Dudley Community are named after the relatives of Harvard affiliates who owned slaves. Leverett House honors the grandson of Governor John Leverett, who authorized the capture, enslavement, and forced migration of hundreds of Indigenous people during King Philip's War.

Leverett House, left, is located in Harvard Square. The Dudley Community is an undergraduate co-op that serves as an alternative to other on-campus housing. By Julian J. Giordano

In emailed statements, faculty and resident deans of Winthrop House, Mather House, and the Dudley Community all acknowledged the report’s findings and pledged to facilitate further discussion.

The namesakes of Lowell House and Eliot House — Abbott Lawrence Lowell and Charles W. Eliot — are two University presidents who oversaw Harvard’s expansion in the 20th century. While neither enslaved people, both endorsed racist practices on campus. 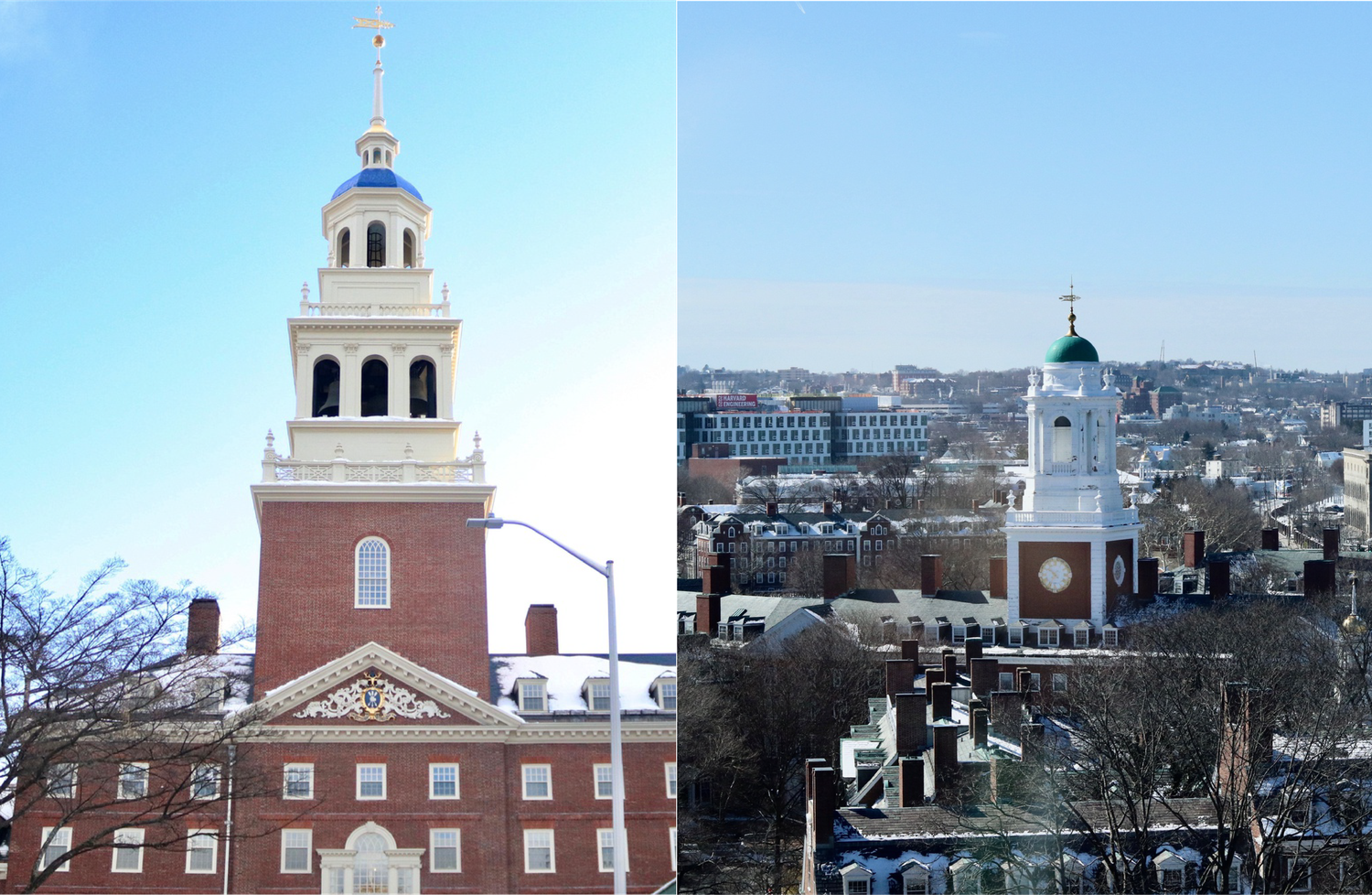 Lowell, famous for creating the residential house system, excluded Black students from living in the new houses, promoted anti-Semitic admissions policies, and supported eugenics. He also amassed his wealth through the textile manufacturing industry, which relied on slave-picked cotton.

As Harvard’s longest-serving president, Eliot had a “paradoxical racial legacy,” according to the report. While Harvard produced its first Black graduates during his tenure, Eliot also promoted eugenics and racial segregation.

The heart of the University, Harvard Yard — which draws thousands of tourists each month — is home to several memorials honoring enslavers and their relatives.

Wadsworth House, which sits on the edge of the Yard facing Massachusetts Ave., was built in 1726 for its namesake Benjamin Wadsworth, a president of the University who enslaved two people. The gate near the building is also named after Wadsworth. 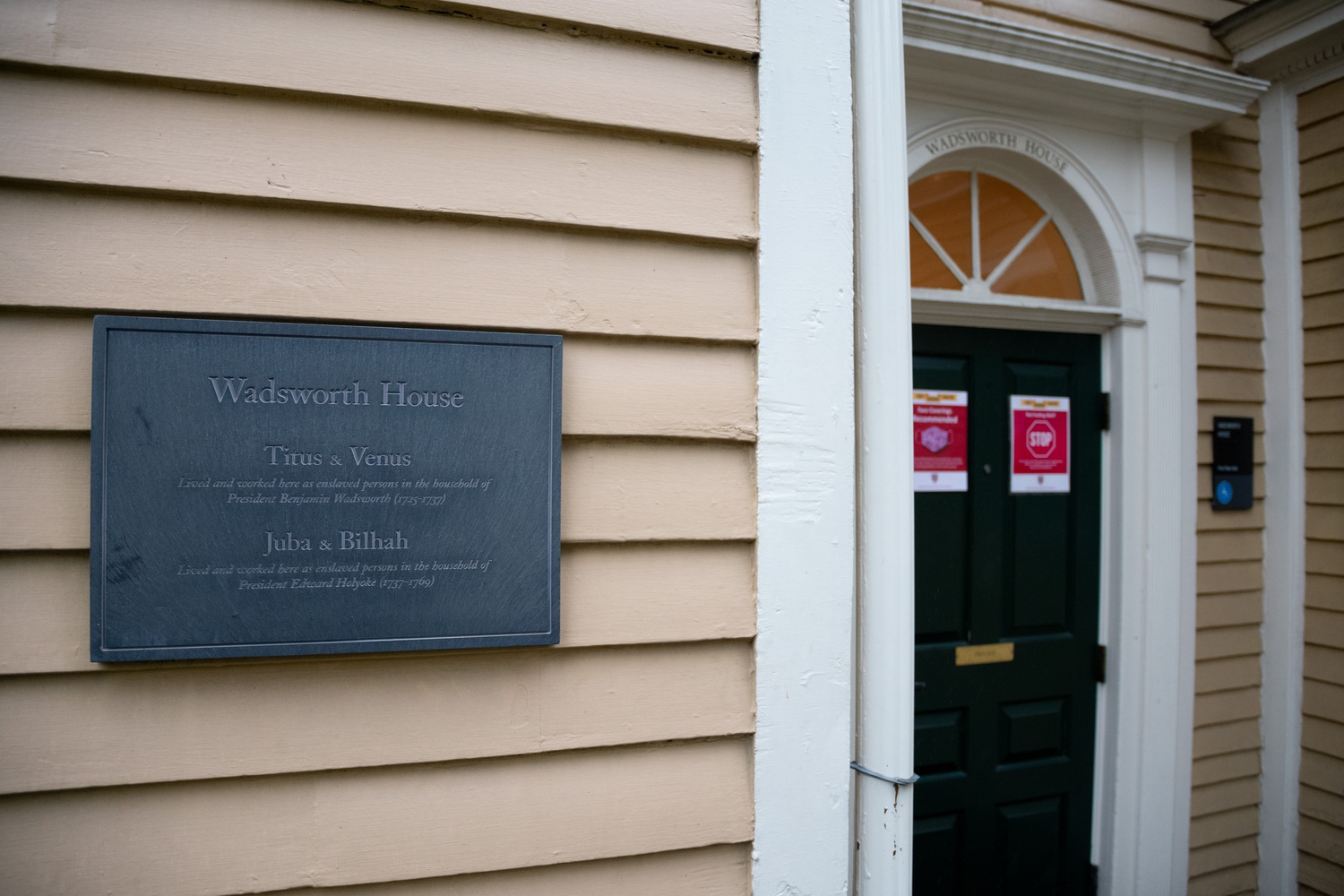 Farther down Massachusetts Avenue, brass markers memorialize the site of Nathaniel Eaton’s home. Eaton — Harvard’s first leader who served as schoolmaster in the 1630s — enslaved one individual, identified only as “The Moor.”

Wigglesworth Hall, a freshman dormitory located in Harvard Yard, was built on the site of the home of slave owner Edward Wigglesworth. A professor of Divinity and fellow of the Corporation, Wigglesworth enslaved a man known as Hannibal. The dormitory is named after his father.

Israel Stoughton oversaw the enslavement of hundreds of Pequot tribe members, per the report. He also enslaved an “Unnamed Pequot Woman” as well as a woman known as Dorcas. Stoughton Hall, another freshman dormitory, is named after his son. 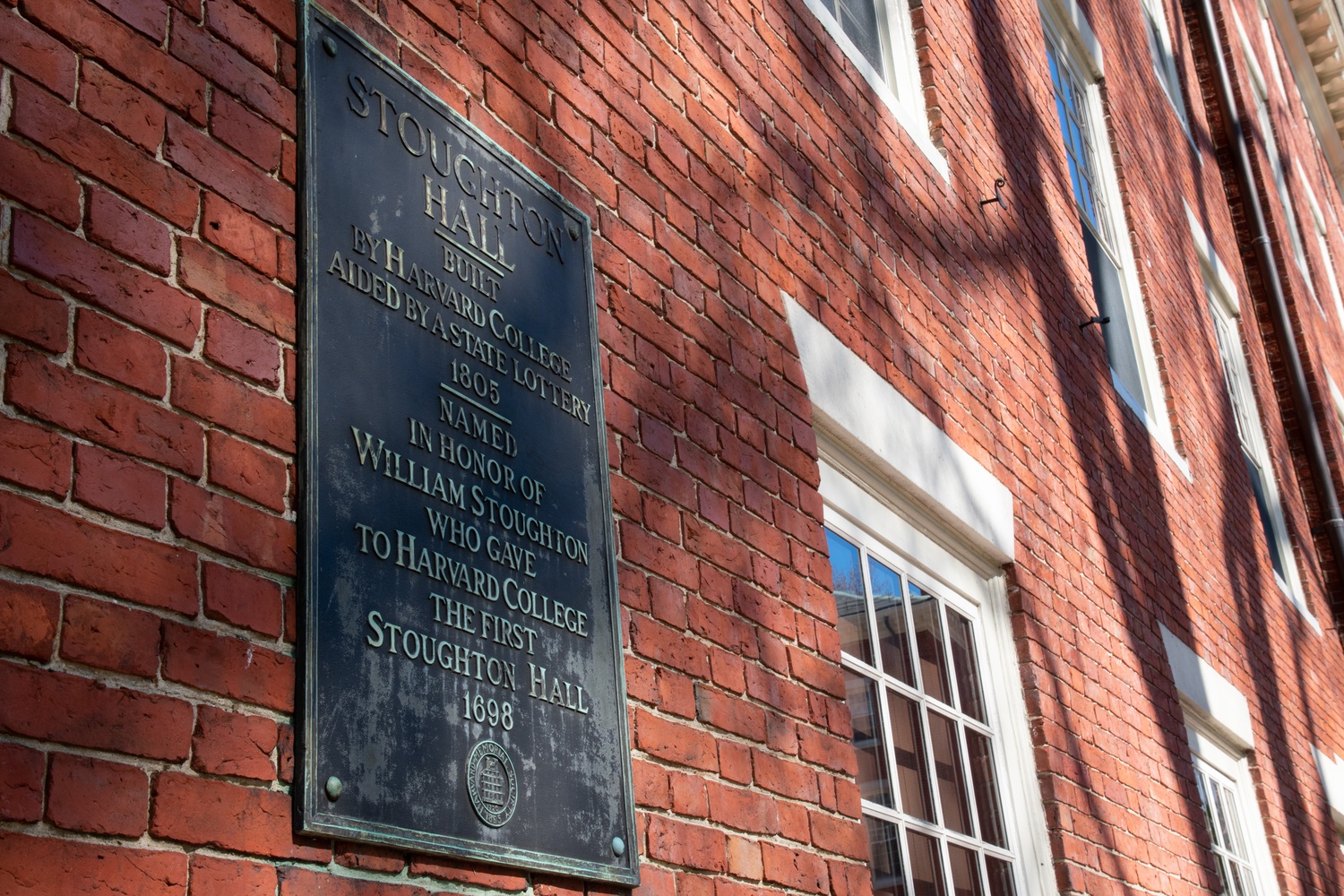 Harvard’s endowed professorships are named in honor of prominent donors — including some with ties to slavery.

Thomas Hancock, the namesake of the Hancock Professorship of Hebrew and Other Oriental Languages, owned an unknown number of slaves, one of whom was called Cato.

Isaac Royall Jr. funded the first professorship in law at Harvard, the Royal Professorship of Law. Alongside his father, he owned more than 60 enslaved individuals in Massachusetts and enslaved an unknown number of individuals on a plantation in Antigua.

Law School Dean John F. Manning ’82 announced in an email to affiliates following the release of the report that the professorship “will now be retired and will never be occupied again.” Professor Janet E. Halley, who held the post for more than a decade, resigned from the role, Manning wrote.

Other slave-owning Harvard affiliates played a role in shaping the school’s history — though changes to campus have altered or removed some of their traces.

For roughly two centuries, the seal of the Harvard Law School featured the Royall family crest. The Corporation allowed the school to change the seal in 2016 following student outcry.

For over a century, Francis Foxcroft’s house stood on the corner of Kirkland and Oxford Streets before it was demolished to build Lowell Lecture Hall. Foxcroft was a member of the Board of Overseers who enslaved two people.

Jonathan Hastings, who enslaved at least four people, was a steward for the College, in charge of managing the school’s residential operations. A stone tablet next to the Littauer Center at the Harvard Kennedy School marks the site of his home, per the report.

Andrew Bordman II served as a steward and cook for the College from 1703 to 1747 and enslaved at least eight individuals. Enslaved people lived and worked at the Bordman home until Harvard bought the site in 1794. The Smith Campus Center now sits where the house was located.

Former Massachusetts Lieutenant Governor Thomas Oliver enslaved at least a dozen individuals. Oliver built Elmwood — the residence of Harvard presidents since the 1970s — and sat on the Board of Overseers. The report recovered the names of at least 11 people enslaved by Oliver and noted he also enslaved an unknown number of people in Antigua. 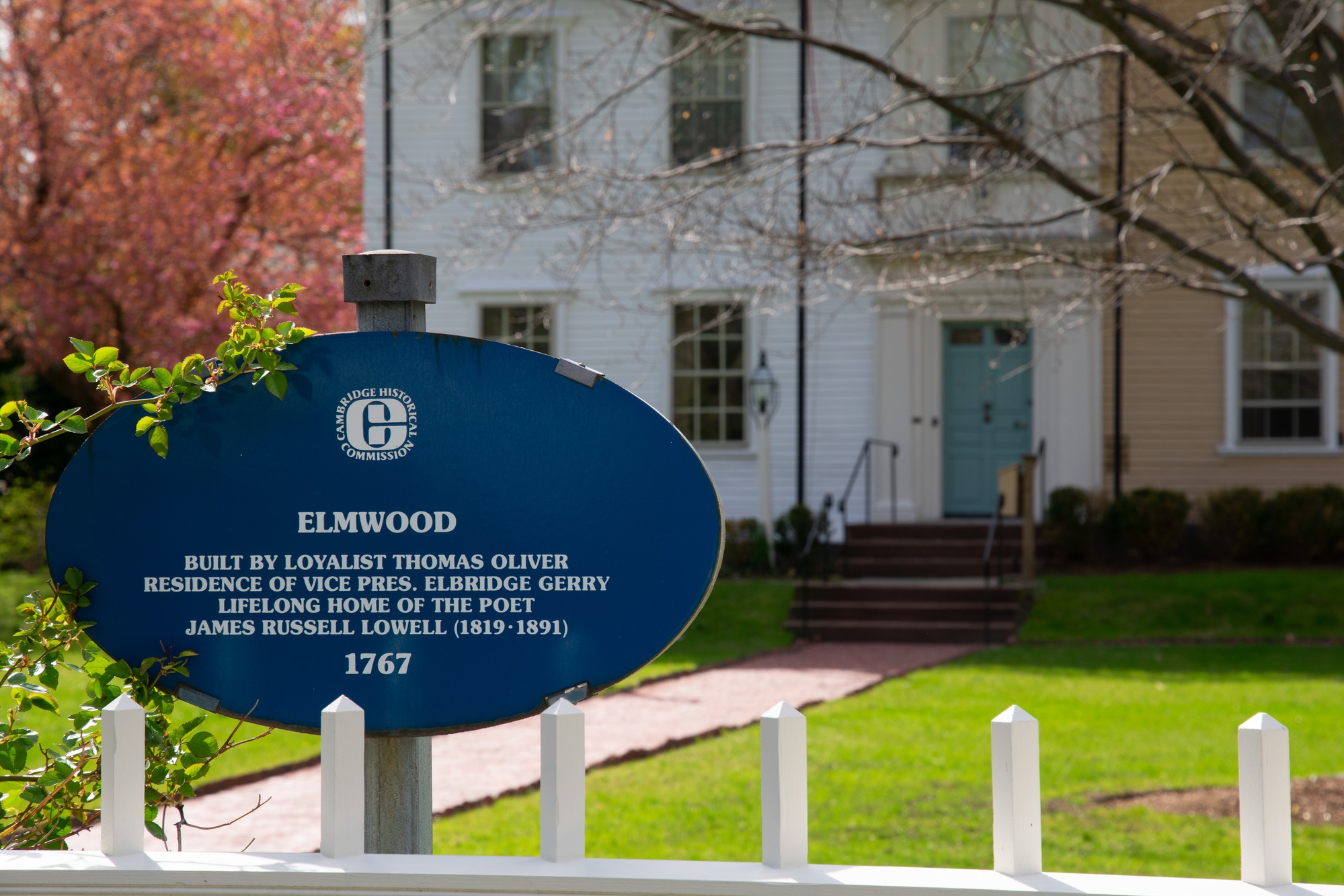 Several streets in Cambridge are named for families and Harvard affiliates with ties to slavery, including Holyoke, Willard, and Trowbridge Streets.

Edward Holyoke, who served as Harvard president from 1737 to 1769 and for whom Holyoke Street is named, enslaved four individuals. Joseph Willard, named Harvard president in 1781, enslaved a man named Cesar. Edmund Trowbridge, a professor and tutor, enslaved three people.

Brattle Street and Brattle Square are both named for the family of William Brattle. A tutor, fellow of the Harvard Corporation, and treasurer of the University, Brattle owned two slaves — Scipio and Cicely.

The report also identified 11 other Harvard administrators, faculty members, and major donors who enslaved people but are not memorialized on campus.

A previous version of this article incorrectly stated the Hancock Professorship of Hebrew and Other Oriental Languages is a position at the Harvard Divinity School. In fact, it is a Faculty of Arts and Sciences professorship.