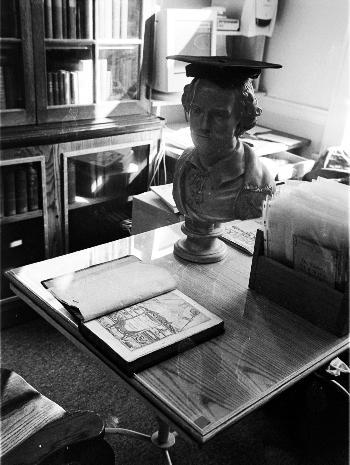 A manuscript is displayed in the new rare book store at 5 JFK St. The owner has yet to decide on a name for the store.
By Daniela J. Lamas, Crimson Staff Writer

On a Thursday morning last week, Michael Atherton moves deftly through the small antiquarian bookstore he opened three weeks ago at the top of a winding staircase above Curious George Goes to WordsWorth.

The bookstore—Atherton says he is considering the name “Ten O’Clock Scholar,” but has not yet decided—is just the newest member of the rare book mecca hidden at 5 JFK St. along with a collection of dentists and the office of “Car Talk,” a popular radio show.

As Atherton navigates the back room clutter of cardboard boxes, shelves and a 200-year-old beechwood press, he pauses to point out his favorite acquisitions—a first edition of the collected works of Thomas Hobbes, a Spanish leather binding from 1831, one of the first printings of the Declaration of Independence.

Classical music plays softly from a black radio balanced precariously on the radiator in the corner.

The bookstore’s mascot, a bust of Shakespeare wearing a graduation cap, sits on a cluttered wooden table.

It’s an unlikely scene at the Square bookstore that overlooks Finagle-A-Bagel and Abercrombie & Fitch.

“There’s still life to the old Harvard Square,” says Bill Keaveny, a bookstore employee. “This building, for example, is very cool. The landlord just seemed to get an itch to have more and more bookstores.”

When Atherton purchased the 5 JFK St. space last May, he says he realized he would have to rent out shelves to fellow rare book collectors for an extra source of income.

Although he bought the space months ago, Atherton spent the summer in Cape Cod and just moved into the Square location three weeks ago.

He says he plans to set up the back room for rebinding poorly maintained first edition works.

The front room serves as a display space for books on sale.

Atherton says he often finds books for the collection in unlikely locations—estate sales, yard sales, library sales. A first edition of the collected works of Hobbes came from a public school in Iowa, for instance.

Atherton rebinds the books if necessary and tries to sell them.

As he explains the store’s mission, Keaveny comes in with a new find wrapped in a pink Garment District plastic bag. The two men gather around the copy of Francis Bacon’s New Atlantis.

“I try to find early American works that should be preserved. These things deserve a decent home,” Atherton says. “The concept here is save old books, pass them on and make a profit.”

“I’m into the history of speculative fiction,” he says, referring to the array of Jules Verne novels displayed in his bookcase. “It’s prophetic. It’s just fascinating. People save these things for a reason.”

Atherton, Keaveny and the cast of characters at Atherton’s new bookstore join a community of antiquarian book lovers in the building.

As Keaveny works to organize his shelves, John E. Link stops by briefly from his own antiquarian and out-of-print bookstore, Karakoram Books, located just one floor upstairs.

The men joke with the casual nature of old friends.

Link’s store specializes in travel, exploration and discovery books, he says. Among his best finds are an atlas of maps of Asia from 1658 and a history of Wales from 1584 that claims the Welsh discovered America before Christopher Columbus (a book that would sell for about $2,500, he says).

Although it is not the most lucrative field, Link says, it’s a rewarding choice of career. He has been in the antiquarian book business for four years and bought the store last July.

“You just get to meet the darndest people,” Link says.

He mentions one regular customer who grooms poodles for a living and spends all his extra money on books with engravings.

“This is a business that has a lot of characters in it,” Link says. “You get your share of oddballs and curmudgeons, but we mostly get along.”

And bookbinding as a career has a long and interesting history, Keaveny says. He describes the bookselling and bookbinding trade as a “guild,” where “young pups” apprentice with more established bookbinders.

“If it wasn’t for publishers, printers and booksellers, we’d have no real sources for historical research,” Keaveny says. “It’s really a rescue mission.”

In order to make a living out of selling out-of-print and first-edition books, Link and many of his colleagues maintain websites in addition to their stores.

But the rising popularity of Internet sites have jeopardized the business, Atherton says.

“In the book trade, a lot of smaller bookstores have closed,” he says. “But in the last five years, the Internet business has started to die, too.”

Although lovers of old books can shop on the Internet, there is a “fondle factor” that drives them to the bookstores, Link says.

Despite the steadily increasing Square rents that have forced many independent bookstores to fold, the booksellers say quirky new stores still have a place in the Square.

“The Square presence is still very nice,” Keaveny says. “It attracts people. It’s important for us to be here.”

—Staff writer Daniela J. Lamas can be reached at lamas@fas.harvard.edu.