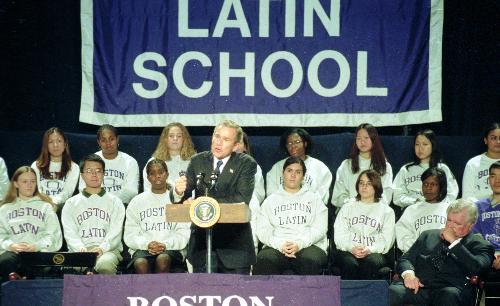 Senator EDWARD M. “TED” KENNEDY ’54-’56 (D-Mass.) looks on as PRESIDENT BUSH speaks at Boston Latin School yesterday after signing the “No Child Left Behind Act.”
By Ronaldo Rauseo-ricupero, SPECIAL TO THE CRIMSON

BOSTON—President Bush gave a speech yesterday at the Boston Latin School touting his newly enacted education reform bill, the “No Child Left Behind Act,” wrapping up the day’s three-state tour that started in Ohio where Bush had signed the bill into law.

“This legislation will put a Boston Latin all over America,” said Bush. The act will increase funding to public schools by $21 billion and will provide $10.4 billion to the Title I program to help disadvantaged students, $3 billion for teacher recruitment and professional development, $1 billion for literacy initiatives, and $200 million for charter school development.

The Boston Latin School Gospel Choir performed “I Can Do The Impossible” to welcome the president to the nation’s oldest public school, founded in 1635.

The theme of the event was one of bipartisan cooperation, as Kennedy told the nearly 1,000 members of the audience about increased cooperation in Washington on educational issues during Bush’s presidency.

“Senator Gregg and I remember three years ago when three weeks of work did not reach agreement, and two years ago when eight days of debate in the Senate of the United State resulted in no bill. . . President Bush has made a difference every step of the way,” Kennedy said.

In appreciation, he presented Bush with a replica of the Declaration of Independence, among whose original signers were five Boston Latin graduates.

Bush’s original proposal to issue vouchers for public school students was not included in the final bill, but was replaced with measures that will allow parents of students in failing public schools to transfer their children to successful public schools, charter schools or use tutoring from public or private organizations.

Bush’s visit, however, was not without conflict.

Several dozen protesters congregated in front of the school during the address. Eleanor L. Hyde, a student at Arlington High School and a member of the Student Coalition Against MCAS, Massachusetts’ standardized testing program, criticized the law’s requirement for standardized testing in grades three through eight to be conducted by each state.

“Why would Bush select Massachusetts to show off his program, where testing has openly threatened the quality of education?” she asked while waving a sign reading “Learning is Not Multiple Choice.”

Others, like Jennifer P. Banister of Teen Empowerment, a Roxbury-based community action group, said they were angered at the choice of the Boston Latin School for the presentation, arguing that as Boston’s top public school it is not representative of real urban youth.

Half a dozen demonstrators, who were opposed to the war in Afghanistan, drummed on buckets during the event and chanted “Selected Not Elected,” as guests entered the school.

In his remarks, Bush explained to the assembly that public schools are particularly important after the Sept. 11 attacks. “After 9-11, people always ask me ‘How can I help?’” he said. “I always tell them first to love their children. . . and second to mentor children, teach children to read. . . How can you fight terrorists? Support your public schools.”

In addition to the protesters, Bush also had his defenders, including Marcus Hughes, a senior at Boston Latin, who said, “We are very pleased that the president selected Latin School, because of the history as well as the talent of the students, but we would have liked to have had more students attend the event, especially the senior class.”

Only members of the National Honor Society, the student council, the Young Republicans Club, and the girls soccer team were invited.