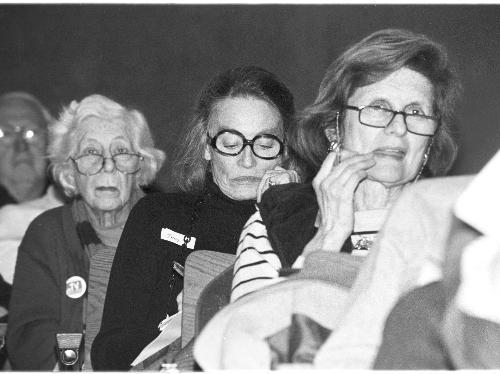 Underneath a painting of Martin Luther King delivering an impassioned speech, representatives from five Cambridge neighborhoods met last night to discuss public relations and political tactics to fight Harvard’s growth in their backyards.

Nearly 100 residents described by one participant as “veterans of the Harvard wars” gathered at the Martin Luther King School last night for the first all-neighborhood meeting on Harvard expansion in a dozen years, arriving at suggestions and common ground but little in the way of concrete action.

Still, many participants said they want to meet again, and suggested more joint action by neighborhood groups across the city to fight the University’s expansion.

Meeting organizer John Pitkin told the crowd that the “increasingly urgent need” to stop Harvard’s growth mandated the rare assembly of the neighborhoods—each of which has been fighting Harvard’s building projects on their own turf.

“If we let the next dozen projects follow in these projects’ footsteps, Harvard will indeed remain a great University, but the city [will be] without a soul” Pitkin told the crowd.

Several of the activists at last night’s meeting recently have been independently fighting Harvard’s proposals for new science facilities in the North Yard, a new home for the government department on Cambridge Street and a modern art museum in Riverside.

Participants from several neighborhoods said they were particularly concerned about the future of areas near the Charles, since Harvard has significant land holdings on both river banks.

“It’s going to end up feeling like Harvard Yard—you can walk through it but it ain’t your space,” said Phyllis Baumann, an activist from Riverside.

The neighbors held three hours of no-holds-barred discussions, and suggested everything from ousting City Manager Robert W. Healy—who many said they consider too friendly to development—to creating their own slate of city council candidates opposed to Harvard expansion.

One “break-out” group suggested forming a new umbrella organization for all neighborhoods near Harvard, called Voters for a Livable Cambridge, which could use its collective voting power to sway the city council—the body which hires the city manager.

Saundra Graham, famous for taking over Harvard’s Commencement in 1970 to protest the building of Mather House and Peabody Terrace, instructed the crowd to use their power at the polls to obtain leverage against Harvard.

“You, as a registered voter in the city of Cambridge, have power,” Graham said. “Power concedes to nothing but power.”

Several said they fault the city manager for appointing a planning board—the group that must approve every building project in Cambridge—they considerunresponsive to neighborhood concerns.

“I think we should march into City Hall to the city manager’s office and demand changes to the planning board,” said G. Pebble Gifford, to applause from the audience. “Otherwise, we’re just wasting our time.”

Many suggested attacking Harvard’s public image to force the University, a tax-exempt institution, into paying more money in lieu of taxes.

No official representative of Harvard attended the meeting.

Saying they were frustrated with Harvard’s piecemeal way of informing residents of development plans, some neighbors even suggested creating their own master plan for Harvard.

“Instead of reacting to each of Harvard’s proposals and saying ‘no, no, no,’ we should define what it is that should be happening,” Baumann said.

Cambridge resident and Lea Professor of Medieval History Thomas N. Bisson told neighbors that faculty could be their allies in pressuring Harvard for more information.

“I think Harvard has a master plan, but they understandably don’t want to reveal it,” Bisson said.

—Christopher M. Loomis contributed to the reporting of this article.

—Staff writer Lauren R. Dorgan can be reached at dorgan@fas.harvard.edu.