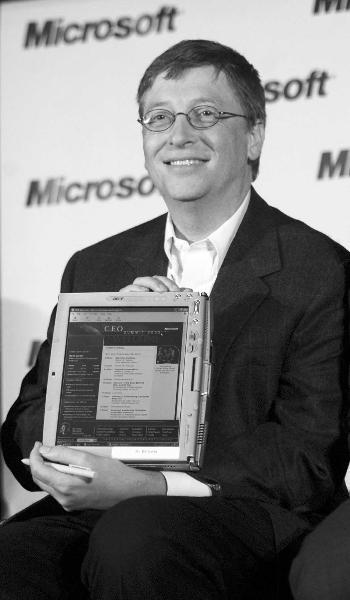 Bill Gates `77 is internationally recognized as a brilliant entrepreneur who created the world’s most powerful technology company and amassed a monumental personal fortune.

Many also think of him as one of the greatest living philanthropists, who has endowed the largest private foundation since Andrew Carnegie.

But only his college friends know him as a mediocre poker player.

Putting the Worth in Wigglesworth

“At first, the size of Harvard was very intimidating,” writes Gates, reached briefly for comment via e-mail. “I came out of a relatively small high school where I was pretty good at quite a lot of things.”

But friends say he made the adjustment well.

“[Since the first day] he was always a very intense, focused individual,” says Samuel Znaimer ’77, Gates’ first-year roommate in Wiggleswroth A-11. “From the very beggining he had a certain high-energy attitude and style. He’d work for 48 hours in a row. Then he’d crash for 18 hours, and when he woke up, he’d go straight back in.”

As a first-year, Gates enrolled in Math 55, the most advanced introductory mathematics course Harvard had to offer.

College friend James H. Sethna ’77, now a professor of physics at Cornell, remembers how he used to study with Gates until two or three in the morning, consuming pizza and taking breaks to play foosball or video games.

“The only all-nighter I ever pulled at Harvard was with Bill,” Sethna fondly recalls. “We played pong and computer chess all night at the computer facility on one of the older computers that had been put aside for just that purpose.”

In the spring semester of his sophomore year, Gates took Math 250, which Sethna and many of his friends had completed that fall.

“We had all found it challenging, and [Bill] said he found it very easy,” Sethna says. “He told us he had finally figured out what math was all about. It was just a system and he had figured out the system.”

It sometimes seemed that Gates did not confine his math to waking hours. Znaimer remembers that he woke up one night to hear Gates talking in his sleep.

“He was saying ‘one comma zero comma zero,’ laying out some sort of math problem in his head,” Znaimer says.

Gates also engaged in the more traditional college pursuit of late night poker but, according to friends, his mathematical ability did not always translate into winning hands.

“He was known to be an aggressive player,” says C. Greg Nelson ‘75. “But in the crowd at Currier House where we played, he was about the median—definitely not in the top quartile.”

According to Nelson, the group usually played with six people and allowed participants to buy into the game for $100.

As the year went on, the pot would grow until some hands were being played for over $1,000.

But no matter how much Gates lost, which he did regularly, his friends say he would always settle his account immediately.

“I don’t remember a single time Bill was in debt,” says Nelson.

While Gates succeeded in the classroom, his primary interest in computers and programming often led him to spend hours away from his studies.

“[In high school], he and a half-dozen of his friends, were addicted to computers,” says his father, Bill Gates Sr. “Bill used to go to bed, and then get up and go over to this computer center that was four or five miles away and do computer stuff with his friends.”

It was in high school that Gates developed a computer program to monitor road traffic and started a small company to market it.

Gates was also hired, while still in high school, to help develop a computer program which could operate a river dam.

“He would talk about how he interacted with the adult professional programmers who were also working on the project,” Sethna says.

“When the program wouldn’t work, [the professionals] would always complain that Bill’s code had bugs, but it was mostly their part of the program that didn’t work,” Sethna says.

As a first-year, he was already taking graduate level Computer Science (CS) courses and, by his junior year, he had taken most of the CS courses the University had to offer.

For one course, Gates developed a baseball computer game and Znaimer remembers how Gates would stay up late and work for hours developing the algorithms to model the bounce of the ball and the angle of approach of the fielders.

“The projects he worked on for the first year were not commercial,” Znaimer said. “They were mostly done for the love of computing.”

But starting sophomore year, friends say Gates started talking about business more seriously. He was not interested in the short-term or the small scale. He wanted to really make an impact.

“[Gates] was going to inherit some money from his grandmother, who had started a bank, and it raised the stakes,” Sethna says. “Unless he could make more money than his grandmother was leaving him, there wasn’t a point.”

According to Sethna, the ideas that Gates would discuss with his friends fascinated them.

“He always had this idea about doing something big and spectacular,” Sethna says. “He used to talk about how every elevator would one day have a computer chip, and even used to talk about artificial intelligence. It was very exciting being around him.”

While still enrolled at Harvard, Gates put the finishing touches on the programming language BASIC for the Altair 8800 chipset.

Though BASIC was not the most powerful programming language of the time, it was realtively simple and easy to use.

Although Gates chose not to finish his career at Harvard, he was almost forced to leave prematurely after a run-in with the College’s Administrative Board.

According to his friends, a CS professor, who they say Gates often corrected in class, accused Gates of using the University’s computer facilities for commercial use.

No serious action was taken, but Gates was given a warning and a proverbial slap on the wrist.

Sethna says he later asked Gates if he held a grudge against Harvard. He says Gates told him he didn’t hold any grudges against the institution and thought the conflict was mostly a personal one with the individual professor.

In any case, by the end of his sophomore year, Gates was getting bored with Harvard and was anxious to move on.

He had taken almost every CS course the University offered, and he was getting more interested in the commercial aspects of computers.

“[Gates] wasn’t adamant about leaving. He was just ready to get out,” says Sethan.

In what would have been his junior year, Gates moved to Alberquerque, NM to help his high school friend, Paul Allen, market BASIC 2.0.

“At first it was just a matter of taking a semester off, and then another semester,” Gates’ father says. “It made us nervous, but we didn’t try to convince him to stay. He was a grown boy.”

Gates writes that he does not regret leaving college to start Microsoft, but at times he wishes that he had had time to finish.

“I really enjoyed my time at Harvard, and being able to work with an amazing group of smart people,” he writes. “When I was building Microsoft and struggling to make payroll I certainly missed the pace of academic life!”

He also says that if he had waited to finish college, the opportunity to play a leading role in the information technology revolution may have not presented itself again.

The Rest is History

In 1983, Microsoft began shipping the first versions of both MS-DOS and Microsoft Word and, in 1986, Microsoft had an initial public offering of $61 million.

In the last fiscal year, Microsoft counted revenues of more than $25 billion in revenues with a staff of over 48,000 worldwide.

A hostile stock market and an anti-trust suit have pushed Microsoft stock down about $66 in the past two years, to $53.26 at press time.

Although Bill Gates has a personal fortune of over $50 billion, he has pledged that he will leave little to his children and give most of it to charity.

To date, Gates has endowed the Bill & Melinda Gates Foundation with over $20 billion.

The foundation, run by Gates’ father, has already distributed over $2 billion to help fight global disease and $500 million to increase learning opportunities in both the U.S. and around the world.

“He’s really in a different league, both in his age and in the amount of money” says Sara L. Engelhardt, president of the Foundation Center, an organization that monitors philanthropy. “Unlike most private foundations who receive one stock, the Gates Foundation immediately diversifies its portfolio, and unlike most individuals, Gates has given so much money to charity in some years that he has not been able to claim the full tax deduction.”

But Gates has not only made an impact on the world at large but also on those who have known him on a personal level.