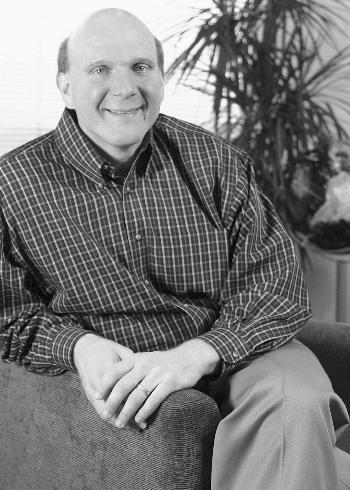 Steve Ballmer ’77 is built like a linebacker yet possesses a shrill, energetic voice and can whip a football team into a frenzy before a game, or induce people rise from their seats and start shouting and dancing during the launch of a new operating system.

Dubbed the “world’s best corporate rallier,” by a biographer of Bill Gates ’77, it is no surprise that Gates selected his college friend to help run Microsoft.

Ballmer had already begun to prove himself a leader as an undergraduate.

At one point he was manager of the Harvard football team, publisher of The Advocate and advertising manager of The Crimson all at once.

“He was very motivated, very effective, and very, very focused,” says Paul L. Bixby ’77, then The Crimson’s business manager. “He was open, helpful, cooperative and great to work with.”

Bixby remembers fondly how Ballmer used to burst through the front door and start yelling that he closed out an account.

This positive impression of Ballmer seems to be shared by many of his co-workers.

Peter H. Alson ’77, a member of The Advocate staff at the same time as Ballmer, remembers that he and the rest of the staff had great respect for Ballmer.

“He was the perfect publisher,” says Alson.”He was great with money.”

Along with his effervescent personality and management skills, people say they remember Ballmer’s physical presence.

Karen M. Bromberg Firestone ’77, who worked with Ballmer on The Crimson, remembers how Ballmer’s physical presence dominated the business office.

“When you walked into The Crimson, he would often be standing in the entrance,” she says. “You would either have to walk into him or try and get by him. But everybody liked him. It was actually quite hard to dislike him—he was so personable.”

But Ballmer did not just excell as a leader in his extracurriculur activities, he was considered a shining academic.

In high school, Ballmer scored a 1600 on his SATs and was a National Merit Scholar.

Yet despite his achievements, Ballmer did not appear to work excessively.

Stephen Manse, a Forbes columnist who co-wrote a biography of Gates, recounts how Ballmer took a challenging graduate-level microeconomics course—Economics 250—with Gates.

The two friends barely attended any of the lectures and embarked on an intense one-week, late-night study program where Ballmer would have characteristic mood-swings, vascillating regularly from screams of “we’re golden” to “no, we’re not.”

Manse writes that when the one-page final examination was handed out, Ballmer realized that it was mostly theoretical and mathematical—areas in which he excelled naturally. Ballmer earned the second highest grade in the course while Gates earned the highest grade.

But Gates, still in competition with his old friend, gibes that Ballmer needed to sweat out the grades that he could achieve through genius alone.

“He went to all his classes,” writes Gates in an e-mail message. “I, [on the other hand], was studiously uninvolved and didn’t go to all my classes.”

After leaving Harvard, Ballmer was accepted to Stanford Business School (SBS) but deferred for a year to work at Procter & Gamble as an assistant product manager, marketing such products as Coldsnap Freezer Dessert Maker and Moist ‘n’ Easy Snack Cake.

But Ballmer was still not yet ready to settle down to business school and headed to Los Angeles to try his luck in the movie industry.

In atypical fashion, Ballmer did not manage to break in, ending up reading B-movie scripts for NBC and parking cars at charity auctions.

After his failed Hollywood experiences, Ballmer finally enrolled at SBS in the fall of 1979 and immediately began to excel to the same degree he had at college.

After the first year of a two-year course, two different consulting companies offered $10,000 prizes to SBS’ most promising students and, in 1980, Ballmer won both prizes.

But, according to Manse, Ballmer had developed a desire to be in a leadership position and was disillusioned with many of his summer job offers from large corporations.

It was during this summer that Gates first approached Ballmer about working at Microsoft.

Ballmer needed little persuasion and it was a matter of days before he accepted the job on a full-time basis.

While there was a little wrangling over the details of Ballmer’s remuneration package, Ballmer finally accepted an offer of $50,000 and seven percent of the company.

When Ballmer became General Manager, Microsoft was in shambles.

The accounting was being done in unorganized ledgers and the management hierarchy was almost non-existent—most of the 27 employees reported directly to Gates.

“Steve put the company itself on a business footing,” Manse says. “This was maybe Steve’s most important contribution to the company.”

Within several months, Ballmer had defined a clear organizational structure, introduced modern accounting practices, and begun to institute the rigorous recruiting practices that would become one of the key factors in Microsoft’s future success.

Ballmer’s next major contribution to the company came in late 1981, when he secured a deal with IBM to outfit all new personal computers with MS-DOS, BASIC and other Microsoft programs.

This was a huge breakthrough, as not only did it give Microsoft a steady and reliable revenue stream, but it also established its legitimacy as a software developer.

Throughout the 1980s, one of Ballmer’s top priorities was recruiting and retaining the world’s best computer programmers, salespeople and executives.

He would often tell audiences that “we need people who want to change the world.”

“He’s very demanding in terms of finding and keeping the best people at the top of the company,” says David B. Yoffie, a professor at Harvard Business School. “He has little patience for people who he doesn’t feel are living up to his standards.”

Hail to the Chief

Throughout the ’90s, Ballmer assumed almost every top management position at Microsoft apart from CEO, bringing his traditional energetic style and motivational leadership to all his endeavors.

In early 2000, after several years of being groomed to take over Gates’ position as Microsoft’s public spokesperson, Ballmer assumed the position of CEO when Gates stepped aside to become chief software architect.

Ballmer and Gates have been known as one of the most effective management duos in corporate America.

However, as Gates’ and Ballmer’s roles have become more defined, they have begun to distinguish themselves individually.

“Ballmer’s a passionate leader,” Yoffie says. “He’s a great motivator of people and he’s a real champion of the company.”

It is also Ballmer’s connection with the consumers that has distinguished him from the more technologically-oriented Gates.

“Ballmer has as much stronger sense of what the customer needs and wants,” Yoffie says.

It was Ballmer and not Gates, Manse says, who recognized the profit potential of web services in 1991 and ensured that they would be Microsoft’s focus for the next decade.

But Manse says that no matter what corporate titles Gates and Ballmer assume in the future, “it’ll still be the Bill and Steve show.”