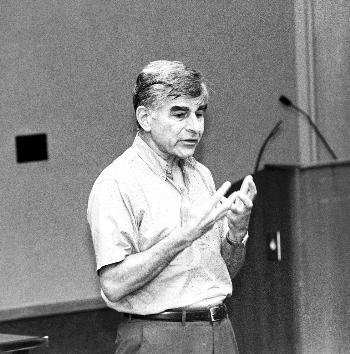 Former Massachusetts governor and presidential candidate Michael S. Dukakis emphasized the importance of public service to an overflowing crowd of over 150 students Monday night at the Kennedy School of Government.

Dukakis, who challenged former President George H.W. Bush in the 1988 presidential election, encouraged those in attendance to get involved in the political process, even while they’re still students.

“This is the most open political system,” Dukakis said. “Every single one of you should work for a campaign.”

Dukakis, who now teaches at Northeastern, said everyone should also consider future careers in public service, telling students to participate in political internships while in college and then enter fields ranging from politics to education to health and human services.

“There are lots of ways to get deeply involved in public service,” Dukakis said. “I’m not saying everyone has to go out and run for office.”

He described his own route to political success, explaining his first work running for office as he “went out and rang every doorbell.” Both of Dukakis’ parents were immigrants, which many saw as a hindrance when he first entered the political field.

“It was inconceivable in 1962 when I first ran for the legislature that a Greek American could be elected governor,” Dukakis said.

Now he says immigrants and minorities have open access to entering politics.

“The immigrant community is starting to come of age in this country. This is an open door for you,” Dukakis told the crowd, some of whom were students from abroad studying at Harvard for the summer.

But he warned students to make sure they know what field they truly want to enter, saying law school was not a prerequisite for going into public service.

After his brief speech, Dukakis opened the floor for questions from students, covering topics ranging from his thoughts on the Middle East, the death penalty and the Massachusetts gubernatorial race.

Dukakis criticized the current Bush administration’s handling of the conflict in the Middle East, saying that the U.S. must deal with the conflict between Israelis and Palestinians before worrying about other countries in the region.

“Before we start invading Iraq, we need to get involved in Israel and the West Bank,” Dukakis said.

He said the U.S. should lead the way in “imposing a settlement’’ on the Israelis and Palestinians following the guidelines of the agreement nearly reached at Taba in January 2001, saying the current leadership in the region will not be able to reach a settlement on its own.

“Sharon and Arafat couldn’t agree if it was raining,” Dukakis said.

While he said the Bush administration has handled the Sept. 11 attacks and the war in Afghanistan well, he questioned the long-term viability of the current efforts, and warned that more focus should be put on policing and intelligence rather than military defense.

“The people who attacked us didn’t do it with armored divisions. They did it with box cutters,” Dukakis said.

On the domestic front, Dukakis addressed the recent proliferation of corporate crime, saying deregulation must end and the federal government should provide more oversight of businesses.

“The situation has gotten to the point where it’s intolerable,” Dukakis said. “People are upset and they have a right to be.”

But Dukakis said the debate over how to rein in corporate abuse should not overshadow the problems of economic inequality in the country. He bemoaned the growing gap between the rich and the poor, calling the current $5.25 minimum wage “sinful” while stressing the need for more investment in equalizing public education funding.

“I don’t want to see the corporate governance debate mask these real issues,” he said.

Dukakis also touched briefly on electoral politics, saying that the Electoral College should be abolished—especially after the 2000 presidential election in which former Vice President Al Gore ’69 was defeated despite winning more popular votes.

“Not having a popular election of the president in the 21st century doesn’t make sense,” Dukakis said.

And he was open about his own political mistakes, saying he should have responded to the attack campaign launched against him late in the 1988 campaign that led to his defeat.

He said the current Massachusetts gubernatorial race was “too quiet,” and that Democratic candidates needed to “challenge [Republican candidate Mit] Romney now.”

Before returning briefly to his message of public service to end the discussion, Dukakis took some time to explain his belief in the need for government support for a national light-rail system.

Dukakis—who took the T to the speech—currently serves as the vice chair of Amtrak’s board of directors. Amtrak has been beset by financial problems in recent months and has called on the government to provide assistance in order to ensure its survival.

“It has never been the recipient of the capital investment it needs,” said Dukakis, who said airports and highways have received the majority of transportation funding. “For 35 years, Amtrak has been limping around with a tin cup.”

But he said he thinks after Sept. 11, many people in the U.S. are looking for alternative means of transportation.

“The potential is huge. The demand is great,” Dukakis said.

Dukakis took questions for over an hour from students. The discussion was the first in the Institute of Politics Summer-In-Boston series.