Car Explodes In Flames Outside MAC

Vehicle, personal belongings destroyed in fire, but no one hurt 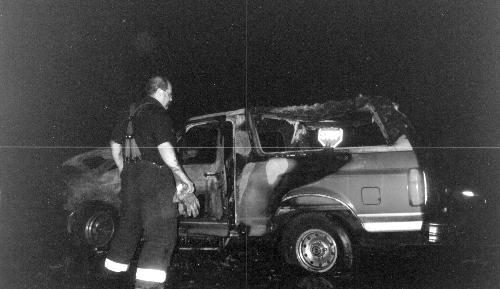 A Ford Bronco burst into flames in the Malkin Athletic Center Quad Monday moments after its occupants jumped out. No one was injured in the blaze, which shot flames 20 feet into the air.
By Joseph P. Flood, Crimson Staff Writer

After taking in a Red Sox game, college students Wilson Rodgers and Christian Johnson, who are staying in Cape Cod for the summer, were driving down Mill Street to visit a friend attending Harvard Summer School when they saw sparks coming from the front of the car.

“We pulled up to a stop sign and the car started smoking,” said Johnson, who was driving the car. “We ran to a call box and called the police.”

Rodgers, the owner of the car, then pulled into a parking space next to the MAC and moved away from the car.

Kirkland House Master Tom C. Conley said he and his wife were in the Master’s residence when the flames broke out.

“We heard—boom!—a huge explosion, and we went to the window to see this huge conflagration of a car spewing flames about 20 feet into the air,” Conley said.

Officials on the scene said that the fire did not spread to the gas tank and that most of the explosions heard were the tires of the car blowing out.

Johnson said Harvard University Police Department officers arrived on the scene quickly, before the fire had reached most of the car, and Cambridge Fire Department trucks were soon to follow.

“It wasn’t just an explosion,” Rodgers said. “The fire started under the hood and just spread from there.”

Eventually the entire car was engulfed, with flames that could be seen as far away as the upper floors of Leverett Towers.

Rodgers said the speed of the spreading flames did not give him enough time to take any belongings out of his car, and he was forced to leave behind three fishing rods, 200 CDs and a set of golf clubs, among other items.

“I think our stuff might be a little water damaged,” Johnson joked as firefighters pulled a badly burned and waterlogged guitar amp out of the back of the car.

Firefighters, who spent approximately a half-hour putting out the flames, were forced to break windows and remove the front hood of the car to make sure all flames were extinguished.

Rodgers said he was just glad that no one was hurt.

“It’ll be a good story to tell,” he joked. “If the insurance will pay for everything, I’d say that this was almost worth it.”

As of Wednesday afternoon, insurance investigators were not able to determine the cause of the fire.

—Staff writer Joseph P. Flood can be reached at flood@fas.harvard.edu.